A watery excursion, a strawberry moon and a seed of growth 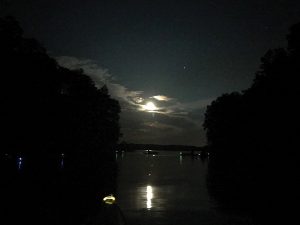 If we’re lucky, we’ll get to see a strawberry moon tonight.

“Does anybody know why it’s called a strawberry moon?” Jo Proia asks the half dozen women assembled at lake’s edge.

No one ventures a guess.

“They call it a strawberry moon because this is the time of year that strawberries ripen,” she explains.

Six of us — suited up in life-vests, bug spray and quick-drying clothes — nod thoughtfully.

So much for the image of a pink, berry-shaped moon in my mind.

Proia continues her primer on what to expect during the full-moon paddle, a two-hour kayak trip that she’ll lead through the dusky waters of Belews Lake and up one of the creeks that feed it near Stokesdale.

First, she says, we’ll paddle to the other side of the cove, skirt the bank, slip through a narrow channel marked by an old bridge abutment and glide up the creek that runs nearly all the way to Kernersville.

We won’t go that far tonight, she says.

But we will stay on the water long enough to feel nature. In real time. With no filters and no distractions. That’s why she’s adamant that everyone needs to mute and stash her phone. Even for pictures.

“I’ve been known to throw phones in the water,” she says. She’s joking, but we don’t know that.

She assures us that she carries a phone for emergencies, and she’ll use a waterproof camera to take pictures and videos, which she’ll post later on the Facebook page of her business, Outdoor Women by Jo Proia.

We’ll stop periodically, she says, to check in with each other.

We’ll also pause for a moment of meditation and some on-board yoga.

“Who can do a headstand in their kayak?” Proia asks with a straight face.

“NO ONE CAN!” Proia says, lowering expectations back into the human zone. “We’re not gonna do that.”

It’s time to paddle into the darkness to see what we can see.

She was a cloud watcher as a kid.

She loved to lie in the grass and pick out shapes in the puffs of vapor that drifted over her family’s farm in Oxford.

The youngest child in her family by five years, she rode an Appaloosa pony, her best friend, through the pastures and woods for hours.

In the summers, she picked prickly cucumbers and tied up sticky tobacco leaves until her palms turned black.

The blistering work stamped her with resolve. She would leave the farm. She would graduate from a four-year college. She would make a different life.

In essence, she would heed the advice of a poster taped to the wall of her father’s Air Force recruiting office: “Aim High.”

Her parents helped her land scholarships — one academic, one for being first runner-up in the Miss Henderson pageant of 1989 — that covered part of the cost of attending Vance-Granville Community College in Henderson. Proia bridged the money gap with baby-sitting and mall jobs. After two years, one class stood between her and graduation. Her adviser said she’d have to wait a couple of semesters until the class was offered again.

“You need to finish your associate’s degree,” the adviser said. “You’ll never graduate from a university.”

Raised to be a polite Southern woman, Proia bit her tongue and doubled-down. She walked to another office and started calling four-year schools. Most had stopped admitting students for the coming fall. UNCG was closing registration that day.

“You need to show up,” the registrar said. 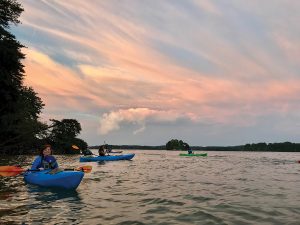 Proia hung up the phone and called her older sister.

An hour and a half later, Proia was standing in a long line at UNCG. When she made it to the front, she spilled her story to the woman who reviewed her transcript.“I’ll be the first in my family to graduate from a four-year college, and I will graduate if you give me a chance,” Proia said.

The woman held her gaze for a moment.

“Welcome to UNCG,” she said.

Thirty years later, Proia — who packs a bachelor’s degree, along with a passel of certifications and licenses for her work — can see that woman’s face in her mind.

“I wish I knew her name,” Proia says. “That was a pivotal moment in my life, for sure. She held my future in her hands is the way I looked at it. I was so glad it was a woman.”

“Does anyone know the name of that tree,” Proia says, pointing her paddle to a tree laden with fuzzy pink tassels.

“I wish I had a mimosa,” says another, referring to the champagne-and-orange-juice drink.

We’re 15 minutes into the paddle and well into getting to know each other.

Brandy and her husband are thinking about moving to Greensboro to be closer to family.

An avid birder, she’s excited to learn that fish hawks live around here.

“You have ospreys?! I told my husband that I was going to miss ospreys if we moved away.”

“Reach up high. Now let your hands float down by your sides, into the water if you’re comfortable with that,” Proia guides. “Let the tension melt into the water.”

Proia, who proved to be an ace at selling everything from pagers to Mary Kay cosmetics, seemed to have it all.

Why then, did she feel something was missing?

And why didn’t she know what it was?

She figured it out when she accompanied a friend on a kayak-and-camp trip to Cape Lookout on the Outer Banks.

Their guide was a former Marine. He expected his charges to tackle physical challenges with gusto. Proia hated it.

“I remember screaming, ‘I’m a housewife!’” she recalls. “I said a lot of bad words that day.”

The next morning, she stepped out of the tent and looked across the water.

She saw wild horses running on an island.

She drove back home knowing that she could not return to life as she’d known it. She arrived after dark and woke up her husband.

Later, her husband John, a financial adviser, joked about that night:

“If we’d only known all she needed was a horse and some water.”

Proia started riding again. She taught herself the finer points of kayaking. Then she taught her female friends how to kayak. Then a bell dinged in her brain.

Maybe this kind of work — helping other women uncover their braver natures by experiencing adventures in nature — was her calling.

“Women need other women,” Proia says. “We’re not anti-male… But a lot of women would not come to what I offer —  traditionally male pursuits — if it was coed. When there’s an opportunity to try something new, some women will step back if men are around.”

For more than eight years, Proia ran kayaking and camping programs for a local outfitter.

In 2020, during the COVID lockdown, she launched her own brand and expanded her scope to include whitewater and flat-water kayaking; stand-up paddle boarding; camping; hiking; backpacking; shooting; archery; rock-climbing; survival skills; horseback riding or horse-handling for those who aren’t ready to giddy up.

Proia leads most of the sessions. In some cases, she hires female contractors who are more expert than she is. In both cases, Proia expects clients to digest lengthy emails on what to expect.

“What I’m really teaching women is, ‘Don’t follow. Lead yourself,’” she says.

We fall into a single-file line, threading our way up the shallow creek as the sinking sun washes the horizon in pink. There’s no sign of the moon, but the night is coaxing the woods and the water to life.

A belted kingfisher, looking punky with its feathery mohawk and dagger-like beak, scuds across the sky.

Fish breach the water with a flash of silver.

Beavers slap their tails against the water, protesting visitors.

The sky overhead deepens to smoky blue. The only light comes from neon glow sticks tied to the kayaks and from the million-dollar homes that hug the lake.

Proia halts the paddle and passes out slices of watermelon. Candice is ecstatic. She’s undergoing a series of dental surgeries and this is the first fruit she’s been able to eat in weeks.

“This is soooo good,” she says.

We smile juicy smiles with her.

Juanita, from Winston-Salem, is happy for another reason. She’s not tippy tonight.

“Tipsy?” Someone teases. A stickler for safety, Proia allows no alcohol on the water.

“Tippy,” Juanita repeats with a grin.

She used to wobble in the water, she says, but the more she kayaks — she’s a regular on Proia’s excursions — the better she gets.

Growth is a common theme among Proia’s regulars.

Kayaking has helped Debbie, from Greensboro, overcome a fear of water.

Susan, from High Point, took up paddling for stress relief after her mother suffered a couple of heart attacks and her husband was stricken with a debilitating disease.

“It was life-changing. I was able to connect with nature and totally let go,” says Susan, who went on to start Triad Water Stewards, a group that cleans up area lakes. “I am a kayaker in my blood now. This thing with Jo has expanded my life.”

Proia stops the group shy of the boat ramp, where motorboats drip dry on trailers. She nods toward a flickering light on shore.

“See that big screen TV up in that house?” Proia says. “There’s nothing wrong with that. We all like to get on the couch and watch TV sometimes. But give yourselves credit. Y’all came out here tonight, in the dark, and went up a creek . . . ”

“With a paddle,” adds Juanita.

The mood is light. We’ve been on the water for three hours, subsisting on water and watermelon, but no one seems tired.

Proia looks back in the direction we’ve come from.

Paddles churn in reverse as we spin our boats around to see a smudgy yellow orb rising to the south.“Look at the shape.”

“Look at the corona.”

“Look at the reflection on the water.”

A beam of white light fractures and wiggles across the inky water as Sister Moon, creator of tides, exerts her pull on Mother Earth.

There’s no internet out here, but the connection is strong.  OH

Maria Johnson is a contributing editor of O.Henry magazine. Contact her at ohenrymaria@gmail.com.

Art of the StateAugust 2022, Department