Bett-ing on a Bright Future

“All the world’s a stage, and all the men and women merely players. They have their exits and their entrances; And one man in his time plays many parts” — Jaques from Shakespeare’s As You Like It 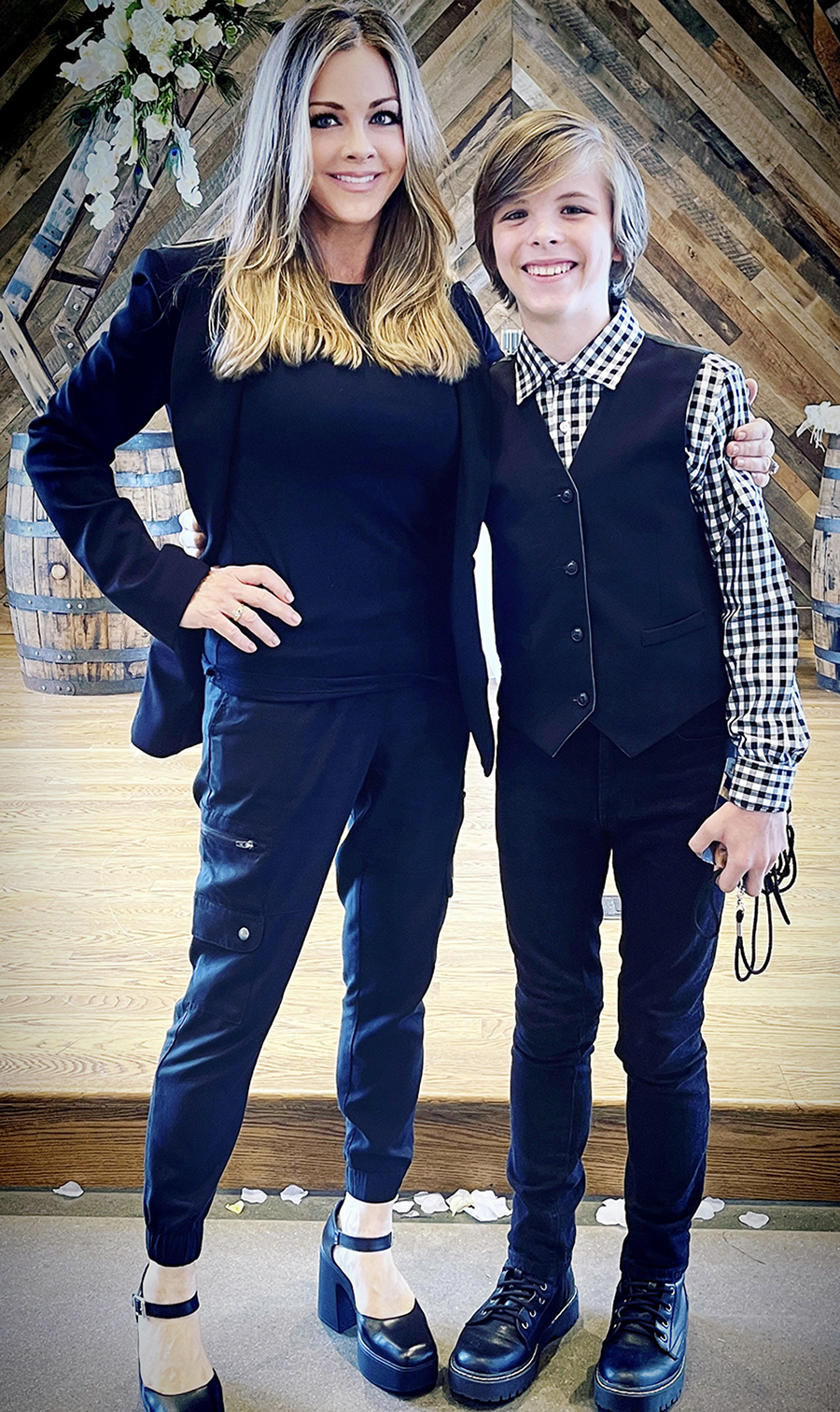 I’m having lunch at one of my fave holes-in-the-wall, Bernie’s Bar-B-Que, with former Mrs. North Carolina and one-time cheerleader/choreographer for the Carolina Panthers Dana Caulder Zimmer Bett and her son Brody. Brody is a veteran of two of the most successful Broadway touring shows in recent years and is currently performing in network television and movie productions. Brody, who already has a couple thousand Instagram followers, sang the National Anthem at Bank of America Stadium to 50,000 cheering fans in August of 2021 when the Panthers squared off against the Buffalo Bills. This might not be considered all that remarkable until you factor in that Brody Bett turns 13 years old this month.

Mentioned in previous columns, Bernie’s Bar-B-Que has the tastiest Lexington style barbecue and the most sumptuously sweet hushpuppies in town. Also on the menu is one of Dana’s guilty pleasures, Salisbury steak smothered in gravy, which she is thoroughly enjoying. While diving into our meals we talk about Brody’s astonishing journey, one that began with a startling discovery.

“We bought him a keyboard and I literally could hear him at 4 and 5 years old picking out notes on the piano,” Dana Bett tells me. “One night I heard him playing ‘Superstition’ by Stevie Wonder. I thought it was an accident, that he just happened to hit those notes by chance. And I said, ‘Can you do that again?’ And he did it again. He had just heard the song one time.”

When Brody turned 6 years old, he began performing in Community Theatre of Greensboro productions, developing his musical “vocal-abulary” portraying, among other characters, the Grand Duke in Cinderella Kids. One of the theater mothers told Dana that Brody might be a perfect candidate for a New York casting call being held for an upcoming Broadway touring company of Finding Neverland.

Based on the Academy Award winning motion picture, Finding Neverland explores the relationship between playwright J.M. Barrie and the family that inspired his creation, Peter Pan. “My mom had literally no idea [how casting works],” Brody tells me. “She just said, ‘OK, I’m gonna send a song to the guy.’”

Until the last decade or so, if you wanted to be in the business of show, you needed to reside in New York for theater or Los Angeles for television and movies. Thanks to readily available video technology, auditions today are recorded at home by the performer, then uploaded to a server.

Dana submitted her son’s demo, which impressed the casting agent. He responded with one of the tunes and some sides (scenes) from the Broadway musical for Brody to record and submit. After a few days, they were told the youngster had made it to the finals. “The other boys at the finals had to travel to New York two and three times to get that far,” Dana says, still amazed. “And I thought, this was just meant to be.”

Following a few weeks of rehearsal in the Big Apple, mother and son were crossing the country with Brody singing, dancing and being hoisted into the air on wires in front of audiences numbering into the thousands each night.

Any time a performer is under a certain age, the role is doubled up, meaning two actors are cast in the same part. “Sometimes I was on standby and the other guy would be performing because they have to watch our hours.” Dana, who was home-schooling Brody, was careful to comply with the child-labor laws of each state they were in. In New York and California, for instance, her home-schooling was supervised by tutors that were traveling with the troupe.

“We had only one ‘layoff’ in the entire tour,” Brody says, “which means we only got to go home for one week in the entire 10 months.” As the tour came to an end, having touched down in 102 cities, Brody scored an agent in New York. After repeated runs between Greensboro and Manhattan, Brody found himself vying for the role of Charlie Bucket in another Broadway touring production, Charlie and the Chocolate Factory.

There were 500 potential Charlies at that first audition. “We were like, whoa!” Dana says. “But he’s so easygoing. He’s not competitive. He’ll do an audition and never ask again. It doesn’t matter how big the job is.”

After barreling through three rounds of tryouts, producers narrowed the field down to five young actors. “You knew they were picking two because they always have a backup,” Brody says about being one of those five. “That’s when it got really real.”

And so it was that Dana found herself crisscrossing the nation with Brody portraying the titular character in Charlie and the Chocolate Factory. Embarking on a six-month run in January of 2020, the tour was abruptly cut short when COVID hit and the duo returned to their home in New Irving Park. Without missing a beat, Brody’s agent began putting him up for parts in animated TV shows as well as other voice-over projects, a notoriously difficult field to break into.

Because of the need for confidentiality in the entertainment industry, more often than not, Dana and Brody generally have no idea when and where one of his creations might be utilized. Dana recalls how early on he was asked to record a little jingle. “And it was the weirdest song.” A year later, an unexpected residual check arrived. “We looked at it and it said: Hunters. I looked it up — that’s an Al Pacino show on Amazon Prime.”

He’s auditioned for movies in which Will Ferrell, Adam Sandler and Kevin James were cast. Currently he’s the singing voice of Gil on Nick Jr.’s Bubble Guppies, Ron on Nickelodeon’s Anna & Friends, and Pando on Netflix’s Spirit Rangers. “He’s Rocky on PAW Patrol,” Dana says. “Not on the show but in the Nintendo video games. We have no idea where this stuff ends up. We just happened to see a post where this little boy was talking about how awesome Rocky was on this PAW Patrol: Grand Prix game. And I was like, ‘Oh my gosh Brody, that’s your voice!’”

When producers needed a vocal match for the iconic cartoon aardvark Arthur for a special project, they turned to Brody. A bit more challenging, he was asked to vocalize Kakeru on an already completed Japanese Anime series, Kotaro Lives Alone, for Netflix. “That was a dubbing job,” Brody notes, “which is totally different. I literally had to mimic the mouths because they animated the words in Japanese.”

Besides acting and singing, Brody loves making music with whatever is at hand. (He owns over 45 instruments.) Adept at almost anything he picks up, he mainly plays piano, guitar, drums and ukulele. Pipe organ is his absolute favorite.

To accommodate future gigs, Dana and her husband are constructing a fully-equipped recording studio on their property. “When Disney says, ‘OK, you’re doing voiceover work this day from 9 until 4,’ they’ve got a lot of people involved.” Dana recalls a moment of panic before one of those morning assignments: “We get up and we hear a leaf blower next door — oh my gosh what are we gonna do? We can’t just say, ‘Hey Disney, somebody’s doing yard work or whatever.’” She convinced the workers to hold off on their motorized mayhem. “Having the studio is going be helpful. That’s why we’re double walling and doing heavy insulation.”

In a diner like Bernie’s Bar-B-Que, which has existed in its present location since 1950, any hint of arrogance would be glaringly obvious. Although I anticipated some degree of pretension, I detect absolutely no conceit from Brody, just the opposite. There’s not even a hint of the arrogance one would expect from someone less centered like, for instance, myself at that age. My ego would have dwarfed the sun!

It’s tempting to imagine Dana being a Mama Rose type. Instead, she treads that finely undefined line between protective mama bear and proud parent. “He can do whatever he wants,” she says of Brody’s future. “Actually, he said a couple of years ago that he might like to be a dentist. I was like, ‘That’d be a great career to have. That’s fine with me. Find something that makes you happy.’”

For the time being, “I’d like to keep doing what I’m doing right now,” Brody tells me. “Just keep spreading joy, making music and bringing smiles to people’s faces.” As for returning to the road, he auditioned for a show just the other day but, “I mean, I liked doing it at first, but then again I just love being home.”  OH

Brody Bett can be found online at: youtube.com/channel/UCUD8r2MdPWlq7exRsHH25yg and on Instagram: @brodybett

Billy Ingram is a former Hollywood movie poster artist and the author of six books, including his latest, EYE on GSO, a collection of stories (mostly about Greensboro) available where books are sold or burnt.