Saved by the Belles

The women who saved Blandwood from becoming history 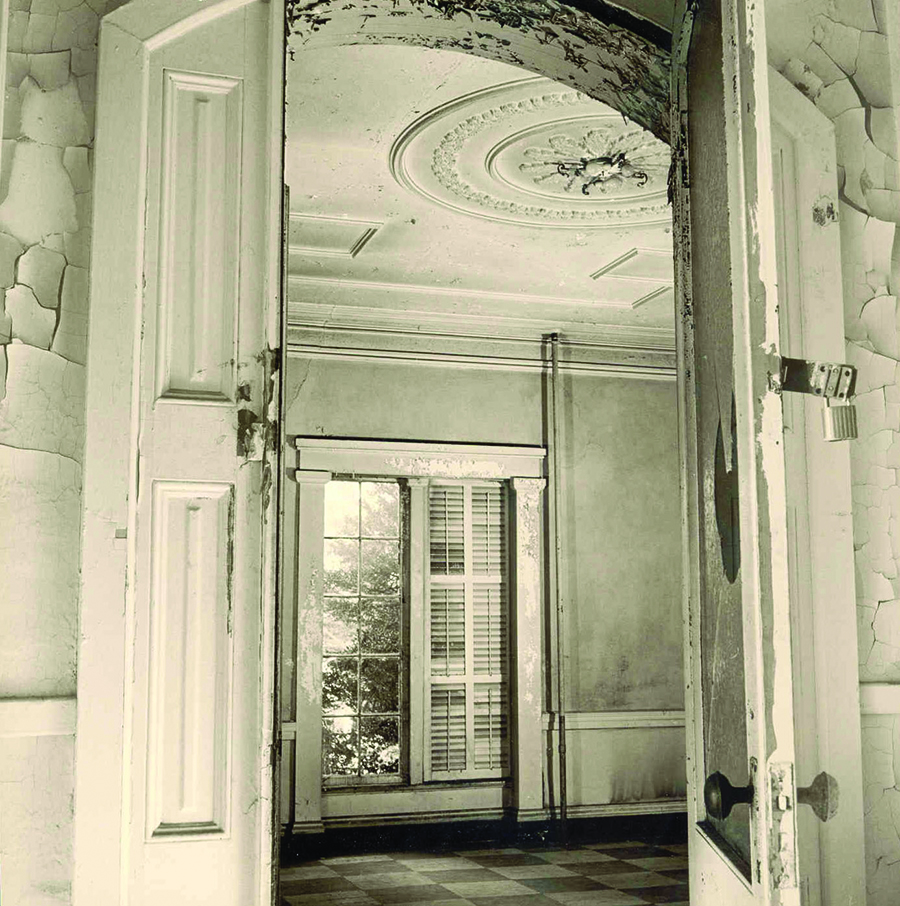 On a morning in 1966, bulldozers were poised to raze a bloated antediluvian structure on a prime block of downtown Greensboro real estate. The building, leaking and collapsing, sat perched on a hill in one of the last residential neighborhoods in the shadow of the Jefferson Standard Life Insurance Building. For almost 70 years, this compound served as a lonely outpost for the Keeley Institute, a live-in rehabilitation center where drunks and drug addicts were promised “That New Freedom” after weeks of four-times-daily injections of bichloride of gold, laced with alcohol, strychnine, apomorphine and willow bark.

With downtown bursting at the seams, an expansion of businesses to the west was only natural. Kroger had its eye on the lot under the Keeley Institute, so a crew was dispatched to clear the land. And they would have, had socialites Anita Schenck and her mother, Mary Lyon Leak Caine, not stood between the heavy machinery and that sacred place steeped in ceremony, where the Civil War came to an end in North Carolina, a once stately manor they knew as Blandwood.

Fellow Garden Club member Virginia Zenke, who with her husband, Henry, was inducted into the International Interior Design Association’s Hall of Fame in 2002, had a nagging suspicion Blandwood Mansion’s architect had to have been someone of prominence. As a trend-setting decorator of the ’60s, she had an acute eye for style. Perhaps if a pedigree could be proven, there might be more of an interest in saving the estate. Peering from black-framed round glasses, pencil protruding from her thick dark hair, she pored through books and reference materials attempting to solve the mystery of who designed Blandwood.

That moment of Zen(ke) came in 1966, when Virginia discovered the architect was none other than Alexander Jackson Davis, America’s leading designer of country houses, known locally for our gentrified State Capitol. He also left his mark on UNC Chapel Hill, where the playfully austere facades of Old East and Old West dormitories and the four-columned roman splendor of the Playmakers Theatre are nothing less than iconic. All of his creations were lavished in the Italianate and Greek Revival genres he was famous for. His designs for Blandwood are preserved in no less than the Metropolitan Museum of Art.

This was a home like no other in America. Reminiscent of a Tuscan villa, it featured two large parlors with garden-view bay windows on either side of an imposing three-story tower made inviting by three enormous archways that circumambulate the front porch. Completed in 1846, it’s the oldest building on an original foundation in the city, one of the first towered Italianate villas in the nation and the earliest surviving example.

With Blandwood’s important historical lineage confirmed, the ladies who lunched became the ladies who launched. Bulldozer stoppin’ grandma Mary Lyon Leak Caine called to order the first meeting of the Greensboro Preservation Society on October 31, 1966, to foster, “a respect and reverence for the past by preserving landmarks in Greensboro including streets, public buildings, churches, houses, parks, trees or any existing examples of culturally, historical and architectural value to the city, state and nation.” No budget, only a zeal to identify cultural touchstones that needed safeguarding, they quickly came to the realization, however, that if Blandwood was to be saved, they’d have to do it themselves.

First efforts were strictly DIY. Green Thumb Garden Club members came wielding pruning shears. Along with Greensboro Jaycees and Thomas Tree Service, they tidied up the one block area, unearthing varieties of gingko, Japanese lacquer, linden, box elder, white pines, oak, maple and mulberry trees. On March 13, 1967, the state’s First Lady, Mrs. Dan K. Moore, was given a tour of the dilapidated Blandwood before heading to a luncheon a block away at the home of Otto Zenke, who partnered with his brother Henry to found an interior-decorating firm that gained an international reputation.

Modern architect Edward Lowenstein, known for the Greensboro Public Library (1964) and YMCA (1971) buildings as well as homes in Irving Park and Starmount, was enlisted to oversee one of the first modern-age adapted reuses of an American historic property.

Seemingly forgotten on the part of the public was any knowledge of the historical significance attached to this former residence of Governor John Motley Morehead. The only governor of the state to hail from Greensboro proper, Morehead was an early champion of the railroad at a crucial time in its development. He also championed a public education system that included the disabled, women and slaves, a concept many considered heretical.

“The Father of Modern North Carolina” had one eye focused firmly on the future. In 1854, as first president of the North Carolina Railroad, he undertook an aggressive expansion of what he called “the tree of life,” connecting every corner of the state to the wider world. As a result, a delicate “City of Flowers” morphed into the “Gate City,” defined by a robust rail system that, not coincidentally, utilized Greensboro as its hub.

As talk of secession grew louder in 1861, Morehead was a Peace Convention delegate, hoping to avoid war with the north. After hostilities broke out, though, he did serve in the Confederate Congress and entertained officers as they marched headstrong to Richmond, then again when they returned in retreat. At war’s end, Greensboro served as a decommissioning depot with Union officials occupying all of the nicest homes. Morehead’s daughter, Letitia Morehead Walker, referred to Blandwood’s 1865 houseguest, Major General Jacob Dolson Cox, as, “a most courteous and elegant man” who, nonetheless, forced her to witness what for her was a macabre sight, a triumphant parade of occupying forces.

After John Motley Morehead passed away in 1866, his daughter, Emma Victoria, and her husband, General Julius A. Gray, became lord and lady of the manor. He had been the commander-in-chief of North Carolina’s repelling forces during the War of 1812. When the British invaders heard his regiment was in their path, they decided to come to terms rather than face this fearsome foe. Gray initiated the successful effort to preserve the site of the Battle of Guilford Courthouse, saved Greensboro College and founded the Greater Greensboro Chamber of Commerce. Gray died in 1891, his service held at West Market Methodist Church. Five years later Blandwood was deeded to the Keeley Institute.

Guilford College bought the property in 1965 along with Arnold Schiffman, who took over Schiffman’s Jewelers from his father, Simon. They put forth a proposal to save the estate. Former mayor Robert Frazier had appealed to legislators for years, but this shady lady was not an obvious candidate for a long term relationship, her very uniqueness a turn-off. No white column décolletage or proper Southern brickwork? Besides, wasn’t that the joint shooting up addicts with weird serums?

On April 17, 1968, HUD allocated over $100,000 to put the ladies in white gloves and pearls within sight of their financial goal, and the rest followed quickly. A week later, after Boy Scouts cleaned and pruned the grounds, the Greensboro Woman’s Club hosted a public open house at Blandwood.

Joyous sounds of celebration have been ringing from the south lawn since 1970, when Blandwood Carriage House became a location of distinction for weddings and receptions, a state-of-the-art facility that has as its backdrop an ancient beauty where past and present coexist harmoniously. Live music, dancing, children’s laughter, business leaders congregating, a bride and groom’s exhilarating first hours as a married couple? They are all a living testament to those preservation pioneers who drew a line in the sands of time, to battles won against prevailing winds on a field of devastating losses.  OH

An excerpt from a story in his first book of (mostly) Greensboro history, Hamburger², Billy Ingram’s new book about the Gate City is entitled EYE on GSO available where books are sold or burned.