“We’re a species that rushes through everything, then complains that time flies.”   —  Steve Maraboli

I recall reading an article by Jeri Rowe back in 2004 about The 48 Hour Film Project being held in Greensboro, the first city in North Carolina to host this worldwide competition that originated in Washington, D.C., three years earlier. The idea is that individuals or teams create a short motion picture, from concept to completion, in just 48 hours, with all teams starting at the same time — 7:30 on a Friday night, in our case.

First, some ground rules: The movie must run between four and seven minutes, contain a certain prop (this year was keys) and a line of dialogue (“Don’t lie to me”), plus a particular character (in this instance, a musician named Duane or Diana Fortran). Details may vary, but these are the general parameters, whether you’re making a 48-hour film in Greensboro, Rome, Lisbon or any of the more than 120 cities participating around the globe.

Over the last 18 years, this hambone has been lucky enough to mug for the silver screen maybe 10 times in various 48 Hour Film Project productions. This was my fourth for Evan Wade’s Stumblemuse Productions. Wade swears this year will be his final frenzy of filmmaking, which is hard to fathom given the enthusiasm he brings to the event. He’s served in one position or another almost every season, the last dozen as producer. “As I went through my 30s, feeling unsatisfied and looking for a new pursuit, I found a certain satisfaction and glee during the 48 Hour Film Fest,” Wade says. “The weekends are always highlights of any particular year, a great networking opportunity that keeps art alive in my heart, helps bolster my confidence as a leader while developing friendships that will last a lifetime.”

At the Friday evening kickoff this year, each team blindly selected two genres to pick from: science-fiction, comedy, western, film noir . . . you get the idea. Given a choice between drama or family film, we settled on the latter. It was decided I would play the lead — just my luck that I banged up my face a couple of nights earlier while avoiding tripping over the cat. Basically, I fought the wall and the wall won.

The next morning, cast and crew got together for the first time. Already there was turmoil. When an Italian restaurant was needed at the last minute, I suggested we decamp to New York Pizza on Tate Street where bar manager Gavin Holden was receptive to the idea of us filming there. This Slip ’N Slide approach to filmmaking is inherently exciting, developing characters and scenarios on the fly, in the moment. Fortunately, Evan Wade had assembled a team of top professionals with years of experience behind them. Director Ken Randall and Matt Amick, director of photography, engaged in guerrilla filmmaking at its finest. Under their pilotage everything looked and sounded pro all the way, moving deftly, quickly through scenes. After just six hours on Saturday afternoon we were done.

For my role — a washed up, one-hit wonder trying to convince his son to go into the music business — I was lucky to be partnered with a very talented actor, Chris Pierce. Our back-and-forth was more like stage acting, which generally requires eye contact, whereas with film it’s often advantageous to cheat a bit to the right or left of your co-star, showing more of your face to the camera. Together we ad libbed our way around the written word, with a lot of our funnier, off-the-cuff scenes ending up on the digital cutting room floor.

My character was a raspy, bitter, high-strung contrarian — basically a walking heart attack. Spoiler alert for a six-minute film: He has one. In the bar at NYP no less. Talk about an ignominious demise.

In my experience with making 48-hour films, anything that can go wrong will. Flexibility is essential to getting things done on schedule. When a location fell through, I suggested we regroup at my place nearby, a four-plex built in 1930 that has been a background for dozens of motion picture and TV productions.

Not so bad, comparatively. Another team lost a crucial cast member due to a car accident on Saturday, necessitating reshooting everything next day. And when the organizers say you have only 48 hours, they mean it. One group found out the hard way after turning in their film 30 seconds late.

Our own nail-biter came during post-production. “Everything seemed fine until the audio started getting out of sync,” Wade tells me, referring to the crunch Sunday evening, deadline rapidly approaching. “We laughed nervously. [Editor] Louis Bekoe frowns and we make the fix. It happens again. Ten minutes later, we watch the ‘final cut’ again, now all flustered, when [production assistant] Lisa Steele notices the required line is missing . . . at which point, Louis’ main computer crashes.” With only 13 minutes to spare, they somehow beat the clock. 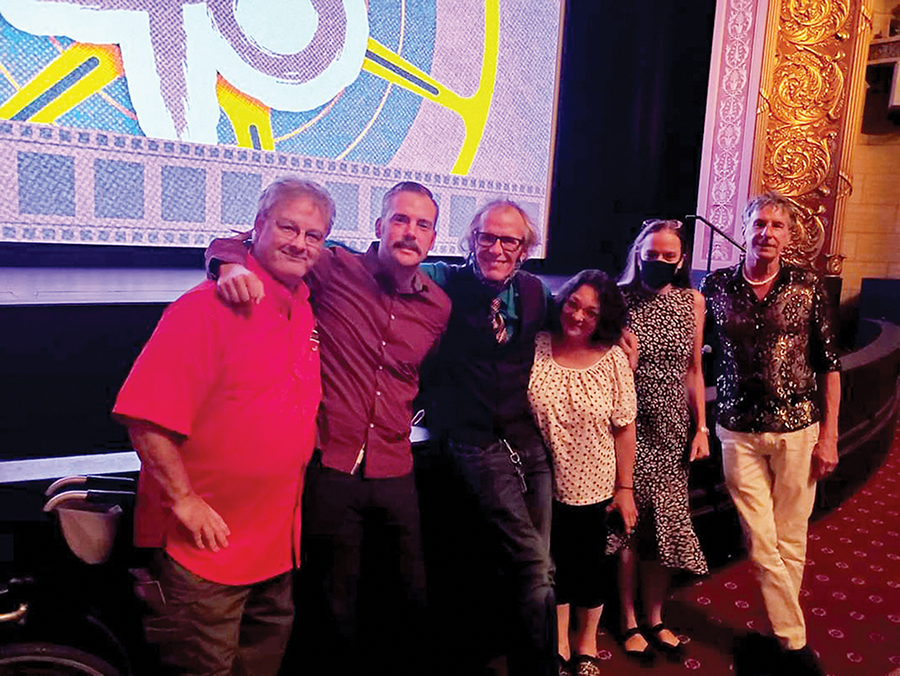 Screenings of all 28 submissions took place at the Carolina Theatre the very next weekend. This year was the first for our new city producer Mike Dickens. For a position with loads of responsibility and no pay, he did a bang-up job of coordinating everything. When he’s not wrangling cinematic cats, Dickens serves as webmaster/digital operations specialist at UNCG.

A total of 15 films were selected for the “Best Of” night held a week later where awards were handed out in 13 categories. Our contribution, Chitarra’s Requiem, won Best Special Effects, while Best Film of 2022 went to those that are fools, which will go on to represent the Gate City at Filmapalooza 2023 with the possibility of a screening at the Festival de Cannes next year.

Acting is mostly something to dabble in today, but I started out my professional career in my teens as a working actor. From 2003–2006, I was writing and appearing on programs for VH1 and Bravo, while, a few years ago, I was almost cast as a murderous sex pervert on Death Row for a cable network series. Very disappointed at not snagging that part — I was far creepier and infinitely more nauseating than the guy they cast!

While Evan Wade won’t be at the helm next summer, hopefully some other team will recruit this scenery chewer for another wild weekend of frenetic filmmaking.  OH

Billy Ingram produced, directed and starred in his first television production at 11-years old, broadcast on The Kiddie Scene with Mr. Green in 1968 with a script lifted out of Cracked magazine. Find him on IMDb and watch his 2022 48 Hour Film Project at YouTube.com/watch?v=UNJFZRT8Y8E.