June is Busking Out All Over!

Cuttin’ up With Colin Cutler

“When I first came to Nashville, people hardly gave country music any respect. We lived in old cars and dirty hotels,
and we ate when we could.” — Loretta Lynn

Colin Cutler is one of those individuals who devoted his life to music from an early age. Like many who choose that path, his passion started at church. “I was 5 years old,” he tells me. “Mom put me up in front of the congregation to sing an Amy Grant song, ‘Angels Watching Over Me.’” He was 9 when he picked up the trumpet, played that until about 16, then mastered the guitar. “I wanted to be a metal head like, you know, Eddie Van Halen,” Cutler says. “In college, I got into more acoustic music. One of the guys I was doing chapel music with had been in a Bluegrass band down in Raleigh. I figured out that the writing I was doing fit that music a lot better.”

Cutler moved to Greensboro from Virginia in 2014 to attend UNCG, aiming for an M.A. in English which he completed at Fort Bliss while serving with his National Guard unit, releasing his first album, Nelson County Wayside, just before deployment to Qatar and Romania. Having written short stories and poetry since his teen years, Cutler realized, “Songs are just poetry put to music.” He says, “And I’ve always loved great songwriters — Paul Simon, Johnny Cash, Hank Williams, the songs that Patsy Cline wrote or chose for herself.”

Ultimately this bushy-haired musician decided he’d rather fly solo, for the most part anyway. “I’m about 23 or so when I saw Kelly Wills, who does a lot of my graphic design, playing a clawhammer banjo and I was like, that’s what I want to do. That’s a very Piedmont style of banjo.” Instead of falling into the local bluegrass scene, Cutler found himself in Greensboro’s Old Time scene.

Whereas bluegrass is dependent on an entire band to weave melodies, clawhammer style is like a simultaneous blend of melody and rhythm, very similar to flat-picked guitar. As Eye understand it, clawhammer differs from three-finger-style-guitar picking because the strings are being hammered, using the thumb and the back of the index or middle fingernail, making the hand look claw-like. Our very own multiple Grammy-winning artist Rhiannon Giddens plays clawhammer banjo in the Old Time music style.

Old Time was developed in the late 1800s into the ’20s and ’30s, whereas bluegrass didn’t really gain popularity until the 1940s. “UNCG has the Old Time Ensemble, and the Piedmont Old Time Society is based in Greensboro,” Cutler notes. “The Triad, with its proximity to the Blue Ridge, is a hub for the traditional clawhammer banjo-driven, Old Time music, which is a more rhythmic style than the finger-picking of bluegrass, a sound more predominant in the Triangle.”

You may have encountered Colin Cutler playing and singing while out in public. “I busk quite a bit,” Cutler says. “I started cutting my teeth playing at the farmers markets when I was living up in Virginia.” Recently he’s been busking at the Corner Market in Lindley Park (it has since moved to Sunset Hills), the Curb Market on Yanceyville and the Cobblestone Farmers Market in Winston. “Actually, that’s how I met my girlfriend.”

The art of busking goes back to ancient days. Many centuries ago, Geoffrey Chaucer captured that spirit in The Canterbury Tales, a grand tradition of troubadours wandering hither and yon, sharing stories and songs. “It’s a moment of vulnerability and intimacy that isn’t available when you’re on a stage,” he tells me. Cutler compares it to church bells, sort of setting a surround-sound rhythm: “The music is there for anyone who needs it or wants it, and it’s often a pleasant surprise what you get back from it.” 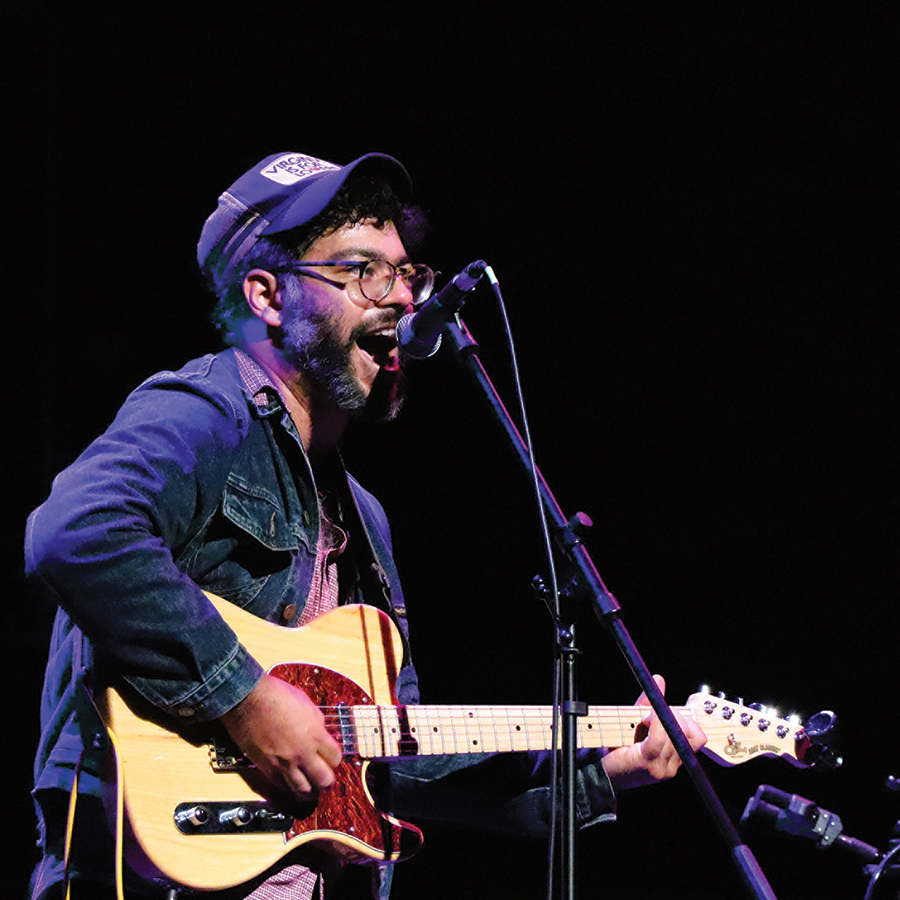 This summer Colin Cutler is spearheading the East of Nashville in the Round series in The Crown at the Carolina Theatre. “We’ve got it lined up monthly through September,” he tells me. “Basically a diverse group of songwriters from all over the region, a couple of locals and a couple of out-of-towners for each show.” Cutler’s June 19 event at The Crown will bring together Momma Molasses from Bristol, Tennessee, Greensboro local Matty Sheets and Emmanuel Winter out of Charlotte.

“That’ll be a cool mix,” Cutler says. “Emmanuel’s a bit more of a jazzy violin player who does a lot of looping and stuff. Matty’s very roots-based, but also moves into rock ‘n’ roll and punk. He’s very much a mainstay of the local scene.” Having recorded an untold number of albums, the ubiquitous Matty Sheet’s Open Mic Night, currently at The Green Bean downtown every Tuesday night, has been a local tradition for decades. “There’ll be musicians up on stage in the round. After one person plays one of their songs, the next person does their song and so on. Usually about a third or halfway through they get a feel for each other and start cracking jokes and telling stories. It’s a good time.”

Of special interest to me is Momma Molasses — aka Ella Patrick — a singer-songwriter originally from Carthage in Moore County, North Carolina, where she immersed herself in Piedmont Blues. She describes her style as, “Warbling county-folk, tear-in-your-beer ballads; toe-tapping, finger-picking and sweet soundin’.” Momma Molasses’ County Folk style is about as twangy as music gets, with loads of clutch-poppin’ fun, while at the same time conveying a level of sweet intimacy. Her rolling contralto warbling has been compared to Mother Maybelle Carter and early Janis Joplin. Check her out on ReverbNation.

In 2021, Colin Cutler released his latest album, Hot Pepper Jam. I asked about the significance of that title. “I did a lot of gardening when I was up in Virginia and then when I moved down here,” Cutler says. “And everything died but the hot pepper plants.” With an abundant crop, he began jamming in a different way to pass the time during the shutdown.

Thanks to a grant from Arts Greensboro, a new album is in the works for this fall, a collection of tunes based on Flannery O’Connor short stories. “It will be more acoustic, more towards blues rock. I’ve had a lot of interest from Flannery O’Connor scholars.” In fact, in May he sang some of his songs in the Greensboro Bound Literary Festival.

In addition to playing at East of Nashville in the Round at the The Crown on June 19 and July 17, Cutler — as he does periodically — will pull together a full band to perform at Gardens at Gray Gables in Summerfield on June 29. Earlier in June on the 22nd, he will be playing solo at Foothills Brewery in Winston-Salem. I’ll do my best to be there to enjoy the great chow, the laid-back atmosphere, Cutler’s clawhammering vibes and the crisp acoustics.  OH

This month Billy Eye releases a new book about Greensboro past and present, Eye on GSO, a compendium of past Wandering Billy columns from the last six years in O.Henry. Available at amazon.com or through your favorite bookstore.