Mullets, hawks and pomps, oh my!

“For three days after death, hair and fingernails continue to grow but phone calls taper off.”        — Johnny Carson

Sixty years ago, when I was a wee young’un entering first grade, every couple of months or so, like when a holiday was approaching, my father marched my younger brother and me up to Lawndale Barber Shop to have our heads reshaped, curls cascading to the linoleum in piles, hair buzzed into distant memory on the sides, leaving slightly longer flops on top. Ed Jones was lead barber at this particular clip joint consisting of three chairs inside a glass storefront at the tip of a strip of shops in front of the railroad tracks directly across from Plaza Shopping Center.

“If Hair Is Cut Well It Grows Out Well” was Lawndale’s slogan where, above the silver-capped jar of combs soaking in bright blue Barbicide, was a mounted metal sign from a decade earlier displaying all of polite society’s approved Red Blooded American Boy hairstyles: Flattop, Butch, Crew, College Contour, Little League or Ivy League. There were other, more adventuresome options like the Forward-Combed Boogie, Flattop Boogie and the Hollywood — no way my old man was going to allow any of that city slicker nonsense atop his upstanding offspring. (Although it should be noted that dear ol’ Dad wore his hair Flattop Boogie style.)

Considered a sort of golden age for barbering, in 1962 Lawndale was one of around 70 similar shops dotting the city, 13 downtown. Keep in mind, the population of Greensboro was less than half of what it is today. Four years ago, I counted two dedicated barber shops downtown. Today, as part of a nationwide cultural shift, there are at least seven barber shops concentrated in the center city. 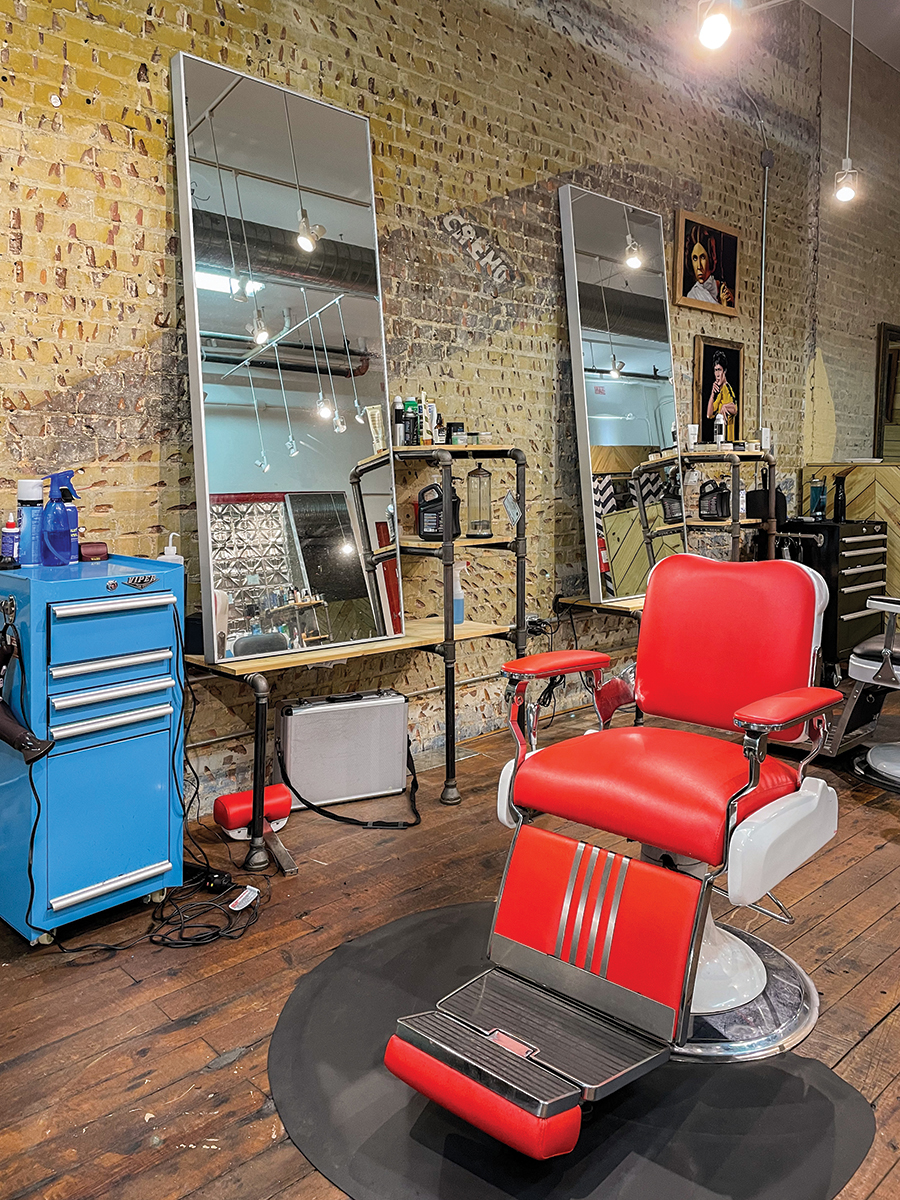 On South Elm, just shy of Lewis Street, is Rock’s Hair Shop, where I spoke with their mane man Grey Dominguez. “When I was growing up we had some of the worst haircuts,” Dominguez recalls of the 1990s. “I don’t think our parents really cared what we looked like. I ultimately ended up going to those Sport Clips types of places.” Nowadays parents are more circumspect when it comes to their child’s appearance. “There are some 10-year olds who walk out of here with better haircuts than I’ve had in my adult life.”

Open in Greensboro since 2018 and offering a wide-open, casual environment, Rock’s delivers what you might call masculine grooming services, plus complimentary craft beer or other beverages with your cut. Your traditional experience with a twist, where they take a much more detail oriented approach to haircutting, along with old school straight razor shaves, beard trimming, vivid or permanent color, and everything else one thinks of from a traditional barber, only with an ABC permit so you don’t have to go looking around for a bottle shop or beer bar to celebrate having your ears lowered.

Rock’s is a “very inclusive and affirming shop” with clients all over the gender spectrum, all races. “We have clients that will bring their laptops and work at the bar,” Dominguez says. “Don’t tell their bosses but they’ll be sipping a beer on a conference call while they’re here.”

While Dominguez is a licensed cosmetologist, “I realized pretty early on into my education that I should have gone to barber school. I guess I really cared about short hair, specifically men’s hair.” Dominguez sees his shop as somewhere “between traditional barber shops and modern salons. We’re sort of a fusion of the two. I actually hear a lot from clients, this is the place they didn’t know they needed.”

While most folks are looking for a practical hairstyle they can dress up or down, some more extreme looks from the distant past are unexpectedly rearing their not-so-ugly heads again. “Mullets, pompadours and hawk styles have snuck back as common trends for sure,” Dominguez notes. “We started seeing a handful of requests for them as early as three or four years ago with a big uptick in the past year or two.” Granted, they’re not the most common style requested, “but they’re frequent enough to not be surprising when someone wants it done.”

On the opposite end of the spectrum there’s Gene’s Styling & Barber Service on Spring Garden, across from Scrambled. Frank Dorrity has been stylin’ and profilin’ in Greensboro for 65 years now, 61 of those revolutions around the sun in the same spot at Gene’s, back when a haircut cost a buck and a quarter. “I came here as the fifth barber in 1961,” he says. Gene’s, he says, has been open since 1957: “The tremendously amazing thing is this little 20 x 35 foot room, the entire world has come through here. Every denomination in the world has been through that door right there. And that’s the original door!”

Dorrity is a proud graduate of Winston-Salem Barber School, after 87 years still the area’s finest academy for learning the discipline. As to why he chose to become a follicle butcher, “Well, it was cotton mills, mines or barbering,” he confides. Half joking.

The heyday for straight edge barbering was the early 1960s. “We were doing a lot of business then,” Dorrity says. “A lot of flattops and different kinds of buzz cuts.” In 1964 The Beatles burst on the scene, and over the next decade men’s hairstyles went from styled to wild.

“We called it the hippie days, the long hair days,” Dorrity recalls of the mad, mod late ’60s. “We lost a great portion of our barbers across the whole country, most did not know how to cut long hair and we didn’t have anyone to instruct us, to show us how. When we finally figured it out, we put up a sign that said, ‘Leave it long but let us shape it.’”

Of course, Dorrity and the crew at Gene’s routinely clip kids’ hair, women as well, same as it ever was. Business remains brisk. When I dropped by on a Friday afternoon, chairs were swiveling, phones ringing constantly. “These years have been a real blessing,” Frank says. “I’ve made some wonderful friends and I still have one or two original clients.”

That’s no exaggeration, if anything an understatement. What are the odds? I actually know one of those loyal customers that keeps coming back decade after decade. “I’ve been going to Gene’s since my first haircut, before Frank came to work there in 1961,” local raconteur Randy Barnes tells me. “I remember having to sit on the board they used to put across the arms of the barber chair. Back then Charlie Sneed ‘Sneedy’ cut my hair.” Barnes also points out that while the sign on the front window was freshly painted a couple of years ago, the building itself hasn’t been refurbished since the Eisenhower administration.

When I spoke with Frank Dorrity about the new trend in chop shops like Rock’s downtown where you can get cropped, coiffed, then leave half crocked, Dorrity confesses, “We would not want customers to be drinking beer in our place ’cause we want ‘em to make it out the door.” The original door from 1957 mind you.  OH

Billy Eye cuts his own hair as is fairly obvious if you’ve ever met the guy.