A Star Is Born

“I don’t take movies seriously and anyone who does is in for a headache.” — Bette Davis

It’s a shame the Star Theatre is remembered, if it’s remembered at all, as what it became and not what it meant in the 1950s and ’60s when it was the center of the entertainment universe for kids residing in the Bears Den, Hamtown, Koontz Town, O.Henry Oaks, Pomona, Proximity, Rankin, Revolution, Tenn Acres and White Oak neighborhoods, known collectively today as McAdoo Heights.

Beginning in the 1920s, State Street emerged slowly as a shopping mecca for those aforementioned unincorporated enclaves. By the late 1940s, the avenue was anchored by North Side Grocery, Kindley’s Place Beer Hall, Marshburn’s Cafe, Moore’s 5 to $1.00 Store and Lois Beauty Salon. These mom-and-pop ventures were replacing the rapidly closing mill villages’ company stores.

Vivian Saunders Kivett was born the same year the Star opened. “My mom took us there when we were real little. When I was 12 years old, my parents would let us go there by ourselves,” she says. “It was our thing; we’d get out of school on Friday and go over there Friday night and all day Saturday and Sunday.”

With a capacity of 300 fannies, the Star was owned and operated by the Lashleys, by all accounts a warm and loving middle-aged couple. Kivett describes Mr. [Carl] Lashley as, “tall, kind of stout, both he and his wife dressed like they were going to church. He always wore a sweater and a bow tie. Mrs. [Virgie] Lashley had the prettiest white silver hair, always perfect, a beautiful woman in word and action. Funny, we never knew the Lashleys’ first names or thought to ask if they had children of their own.”

In 1963, 14-year-old Kivett was hired as an usher for the Star. “Mr. Lashley knew me well, knew my mom and dad so I did that for three or four years,” she says. If the crew was thirsty, Mrs. Lashley would pour them a concoction she dreamed up. “She would put a little bit of orange soda in the cup, mix in some Coke, a little bit of cherry smash and she called it ‘bourbon.’ We thought we were really drinking something special,” Kivett recalls with a chuckle.

“You didn’t have a lot of places to go back then,” says Billy Williamson, a frequent attendee in the early 1960s when the Star was date night central for mill village teens. However, under Mr. Lashley’s watchful eye, there was no hanky-panky going on in his joint. “You’d be over in a corner with a girl and the next thing you know there’d be a flashlight shining on you,” Williamson recalls from first-hand experience. “Mr. Lashley or someone else would break you up,” he says. Because the theater owner knew the kids individually, as well as most of their families, Williamson would occasionally be pressed into service as an usher. “Sounded like a good time to me. I’ll shine a flashlight on someone.”

If filmgoers got too rowdy, they were directed back into the lobby to sit on “The Bench.” “Mr. Lashley would watch over them, even correct them,” Kivett says. “After he thought they had sat there long enough, he’d let them back into the theater. If they were too unruly, he’d call their parents and tell them to come pick them up.” While the theater closed at 11 p.m., “Mr. Lashley would not lock the doors until all the kids were picked up and gone,” Williamson says. “When I think about it, they were mostly babysitters.”

In 1968, my boujee Latham Park mother somehow discovered — just a few blocks away on the wrong side of Elm — what amounted to a 50-cent-an-hour, four-hour-long babysitting service going on at the Star. From that weekend on, I, my brother and sister, along with the King girls who lived next door, ranging in age from 11 (that would be me) down to 6, were dropped off promptly at 11 a.m., with my mom returning at 3 to scoop us up. Movies I remember munching buttered popcorn over were, Chitty Chitty Bang Bang, The Love Bug, Tarzan and the Jungle Boy, Don Knotts and Phyllis Diller comedies, as well as schlockfests like The Green Slime and Island of Terror. Seven-year-old Toot King found the latter so ghastly, she hasn’t watched a horror movie since.

That’s how five innocent children were left standing on the sidewalk at 11 Saturday morning in front of the latest sin-ema experience as the city’s most pernicious perverts paraded by. Heck, how would 12-year-old me know if Tropic of Sweden wasn’t where Godzilla bubbled up from a radioactive primordial ooze? The ticket lady was kind enough to call our house. Problem was, dad was on the golf course and mom was at Belk’s. No one home to answer the phone. We were never seen or heard from again. 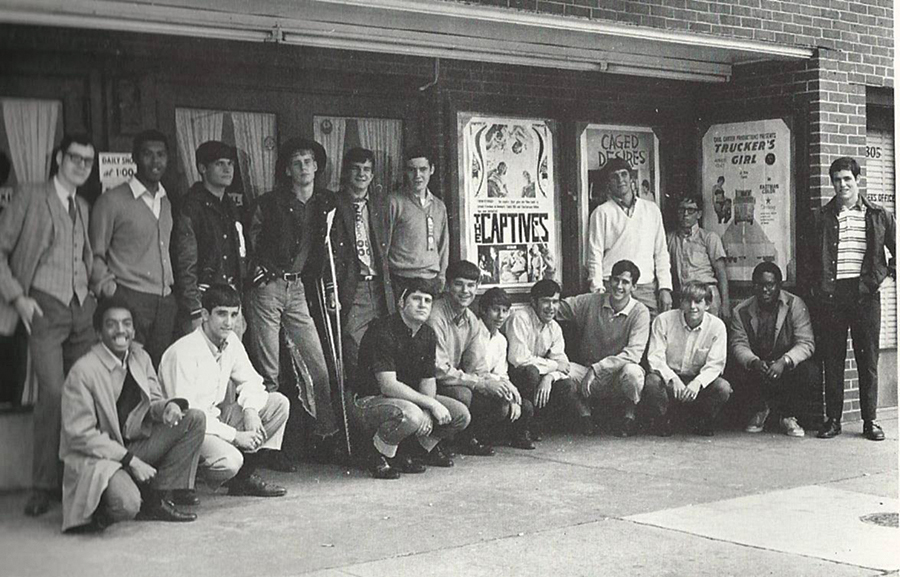 State Street began declining rapidly at that point. Sadly, the only photo I could find of the Star Theatre was from the 1971 Page High yearbook — natty-looking teenagers brazenly posing in front of a location of ill repute. Asked if they ventured inside after that pic was snapped, one participant answered, “Yeah, probably.”

In 1984, State Street underwent a major transformation to become the quaint fashion and food destination frequented by the Irving Park crowd today.

Whatever happened to the theater itself? A third of the building houses Dan Boswell Spectrum Salon, the other two thirds is Cafe Pasta, serving exquisite Italian meals for almost four decades. This was a major undertaking. Theater floors slant downward toward the screen, so concrete was poured to elevate the floor. The ceiling was lowered 9 feet, and the projection room was remodeled for upstairs dining. Once again, this spot serves as an enticing, family-owned and oriented setting; although I’m fairly certain no one will shine a flashlight your way should you be canoodling over Ray Essa’s chicken picatta.

In the 1980s, Vivian Kivett pulled her car over after spotting Mrs. Lashley walking her poodle outside a townhouse behind the Golden Gate Shopping Center. “She told me that Mr. Lashley had passed away and we got to talking about old times. Then she told me, ‘Ya’ll were our children. I’ve known you since you were a little bitty girl.’ I said, ‘Yes ma’am we were your children. And we always will be, Mrs. Lashley.’”  OH