Toward the end of middle school we went on a field trip to Virginia to go whale watching. I don’t remember any of us seeing anything through the rain-smeared windows of the cabin. Most of us were sitting in the boat, drinking hot cocoa. But it was a trip where we got to stay in a hotel with our friends, away from parents, so that’s what mattered. I didn’t do much, certainly didn’t climb across balconies to sneak into girls’ rooms or sneak alcohol into my room like some of my peers (and one of my roommates). I don’t know what the chaperones expected, as there was zero chance they’d be able to monitor all of us. I’d like to think we were innocent as my son is approaching the age I was, but I know from the stories that a lot of that innocence was long gone.

— An excerpt from The Letter Journal

One afternoon, while tending bar at Parts Unknown: The Comic Book Store, I happened upon a 5-by-5-inch graphic novel that blew me away with its raw, emotionally charged storyline. The Letter Journal is one man’s illustrated tale about growing up in Greensboro, leaving for college and becoming a working artist and father — all the while plagued with depression and gut-wrenching insecurities. Which pretty much describes the trajectory of every true artist I’ve ever come in contact with. This book drills into where those feelings of inadequacy originate, wrapped in a deeply personal narrative.

The Letter Journal is written and illustrated by Christopher Williams, whose family moved to The Gate City from Florida when he was a child in 1986. After attending App State in 1998, Williams moved to Durham, where he lives today.

Drawing from personal experience, the artist mused, “What if I just start attaching different images to paragraphs of a story?” Which brings us to the aforementioned whale-watching trip.

“Would it be safe to say that you have a permanent case of teen angst?” I venture.

“I have maybe an evolving sense of angst,” he says. “I thought that it would go away at some point . . . But yeah.”

As for the inspiration for The Letter Journal?

“John Porcellino makes a comic called King-Cat,” Williams says. “He’s been publishing that for, I think, 30 years, and it covers a lot of what he’s been through. Also, Adrian Tomine published a book last year that covered his experiences as a freelance artist, and that really resonated with me.”

Williams has published ten graphic novels in two-and-a-half years. Most of them come with a suggested soundtrack to help bring the reader “into the kind of mood that I want them to be in to experience the book.”

For The Letter Journal, he recommends the song “Claws” by post-rock/post-hardcore band Shipping News.

Radio, one of Williams’ latest books, was made possible with support from a Durham Arts Council grant.

“If I had the opportunity to go and speak with my younger self, what would I say? How would I handle that?” he says, speaking to what sparked it. “My son, Seamus, is in eighth grade now. I was thinking about what it would be like to be my son’s age.”

Williams’ family still resides in Greensboro. “I’ve started taking my son around town and showing him around. ‘This is my old high school, Page. That’s where the art room burned down . . .’”

“The story that I had heard was that someone broke into the school and tried to burn it down. And the art room was in the middle of the campus, so they set it on fire. It meant the art students had to go to the library for a semester. It didn’t affect anybody else.”

During the lockdown, Williams concentrated on creating books. But his real passion, his raison d’être is creating gig posters for bands playing at Cat’s Cradle, the iconic music venue in downtown Carrboro. Truthfully, his posters are some of the most amazing designs I’ve ever seen. (Keep in mind that in a previous life I was tasked with creating artwork for big budget Hollywood blockbusters. I’ve worked with some of the biggest names in illustration and photography. Williams’ work is right up there with the best.)

What makes these posters so remarkable is that for the longest time they were strictly silk-screened, not fashioned from pixels. 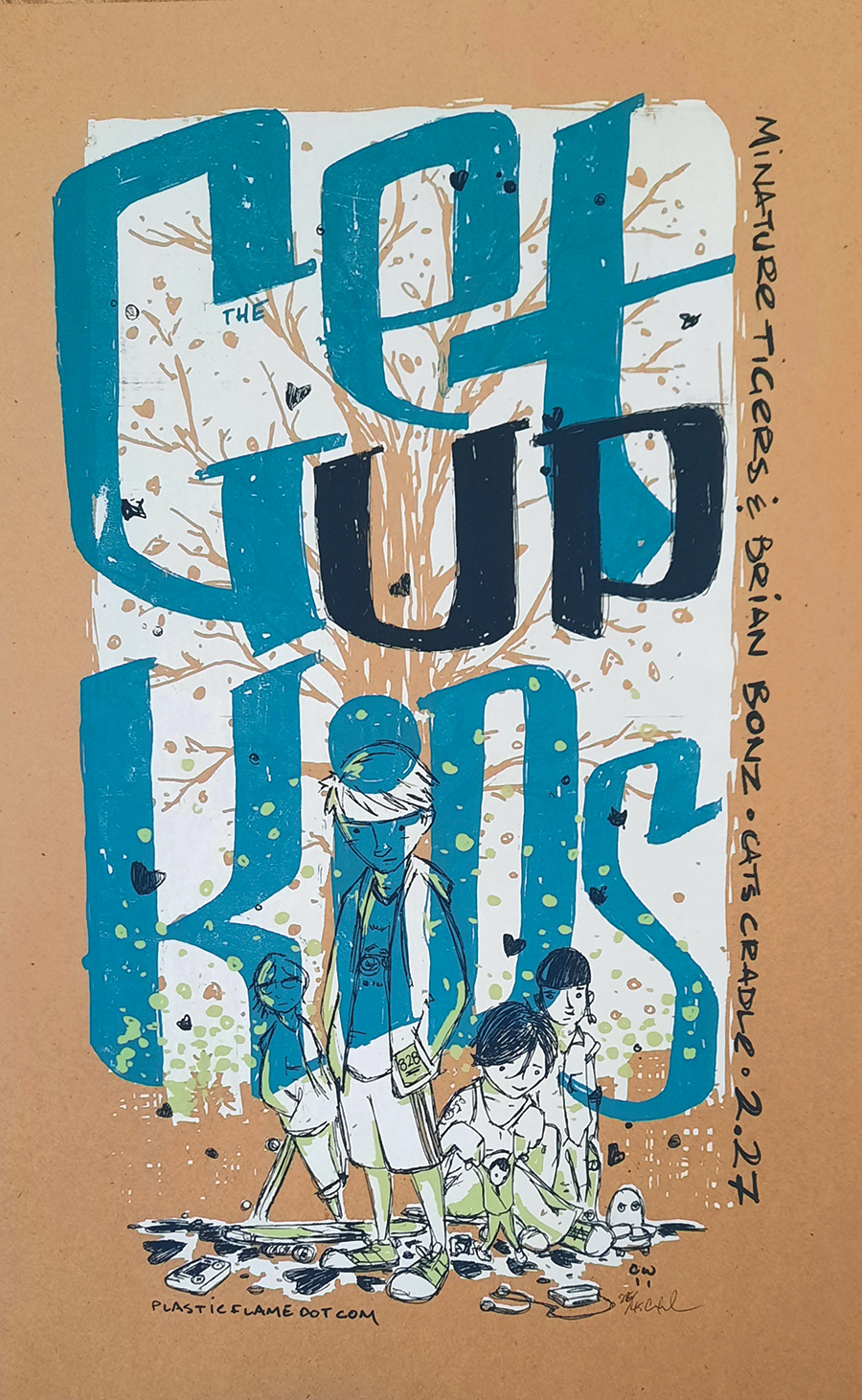 “When I started, I thought computer art was going to be a fad,” Williams told me. “And I was like, ‘No, no. That’s nice that people are using Photoshop. That’s not my thing. That’ll go out of style.’”

Instead, he would draw and letter everything by hand, creating color separations with sharpies on tracing paper.

“A couple of years ago, I started to change things up by going completely in a different direction and began collaging illustrations digitally. Now it’s a mix.”

Since 2003, he’s personally screened around 1,000 works of art for Cat’s Cradle. Imaginative, fluid designs for seminal musical artists like The Get Up Kids, Superchunk, Pedro the Lion, Holy Ghost Tent Revival and The Lemonheads. “I’ll get contacted by Cat’s Cradle with a list of bands that are coming through. And I’ll email back, ‘Hey, if no one is doing that band, I really want to do it,’” Williams says.

One of my faves is a poster for singer/songwriter Conor Oberst: a rollicking juxtaposition of Calvin and Hobbes-like imagery, conveying a zany joy that stands in stark contrast with the performer’s melancholic but melodious musings. 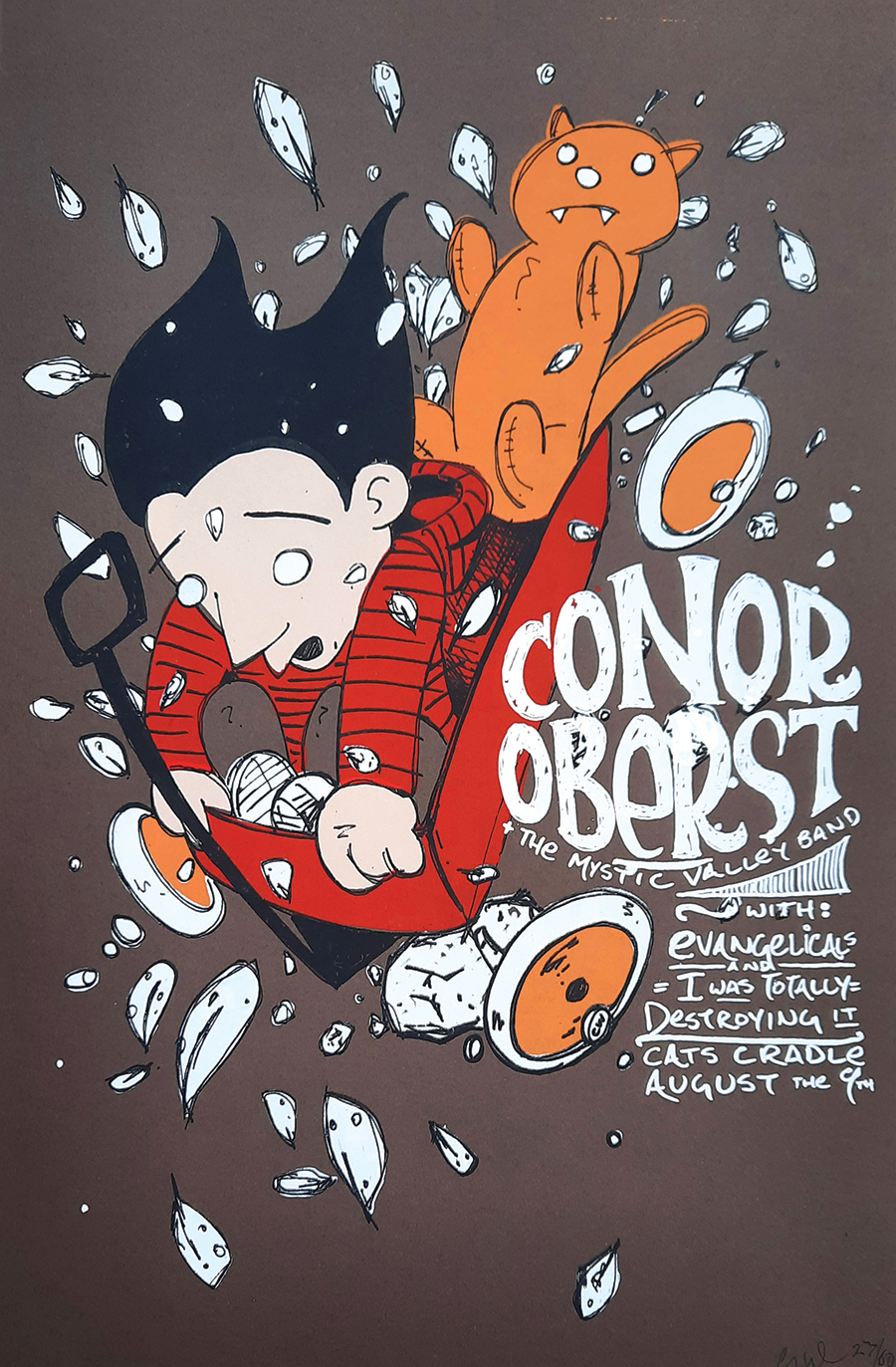 nt,” Williams says. “That someone can go and have this great time — maybe it’s their first date or something — so they rip the poster down off the wall of the club and put it up in their house and have this thing that they can always remember.”

“It’s fun to try and line all that up, so the pages are lined up exactly.”

Williams continues: “With not having a lot of gig posters [last year], it’s been a nice way to challenge myself in a new way.”

Christopher Williams’ books, T-shirts, skateboards and 100 or so vintage band posters are available at his publishing company, plasticflame.com. Spend an hour immersing yourself in what amounts to a timeline of cutting-edge musicians who provided the soundtrack for a couple of generations at least.  OH

Billy Eye, who wrote a bi-monthly column covering the East L.A. music scene from 1980–83 (the source for his book, PUNK), is OG — Original Greensboro.