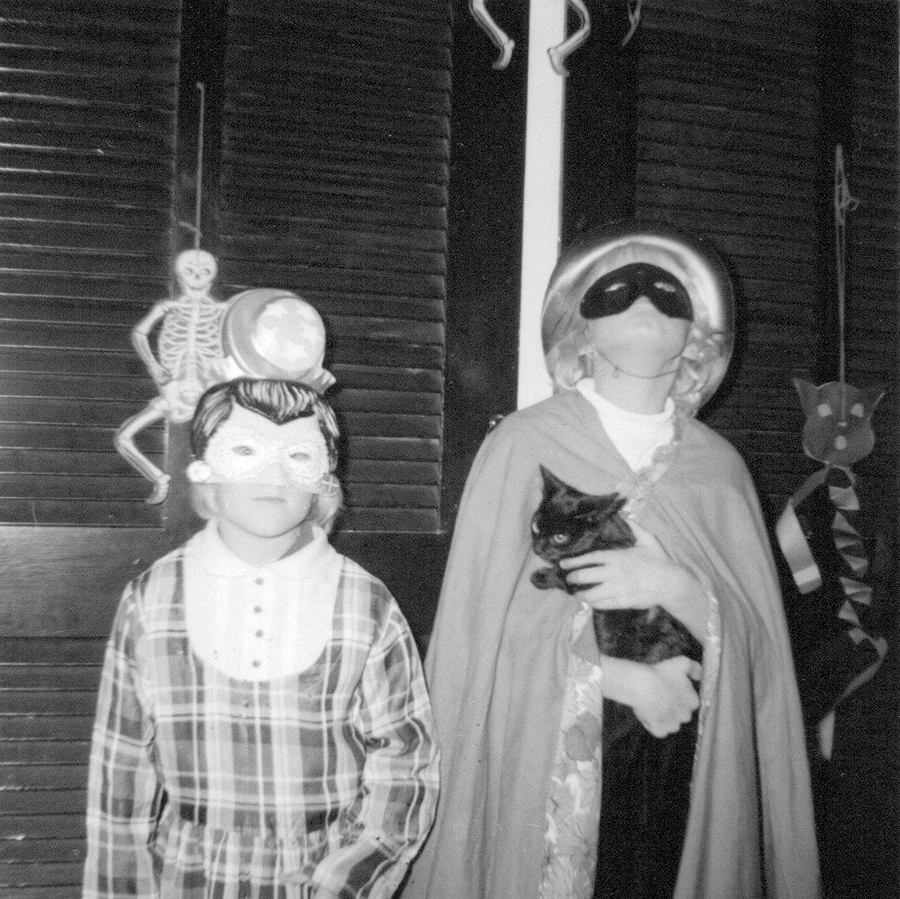 A mask tells us more than a face.
— Oscar Wilde

Imagine an all-but-extinct Halloween tradition that involves hundreds of unsupervised, masked juveniles. Unleashed like wild beasts into otherwise peaceful neighborhoods in a door-to-door insurgency, roving gangs would coerce acquaintances and strangers alike into forking over loot . . . or else.

Trick-or-treating is a lost art.

Let’s face it, this was, essentially, a kid-pro-quo/blackmail scheme. For those poor souls who refused to participate in Junior’s socialist asset forfeiture, the “or else” came in the shank of the evening when packs of older boys would exact revenge on the noncompliant. Wearing shirts (one imagines) as brown as the leaves that crunched beneath their Keds, the herd would pelt dark, uninviting houses with eggs or, worse yet, “kudzu” trees with rolls of toilet paper (the pulpy white remnants lingering in limbs for months).

A century ago, Halloween was strictly a family affair with getups made from feed sacks, rags and assorted scraps, faces hidden beneath papier-mâché punkin

heads with ghastly disfigurements and horrific skin conditions. This was mostly for photos and fun around the house; when your closest neighbors are miles away, forget about going door-to-door in search of sweets.

With urbanization in the 1950s came an explosion of mass-produced, cheap Halloween costumes based on TV shows, horror movies and pop culture figures, retailing for around a dollar at Woolworths or over at the Big Bear, aka, “The Friendliest Stores in Town!” From the enterprising folks at Ben Cooper and Collegeville came rows upon rows of molded plastic masks — in vivid colors — with lopsided holes for eyes and lips. Meant to be worn together, included were flimsy vinyl smocks adorned with character names and images of who or what the kids were supposed to resemble (although they rarely did).

Those cheap outfits allowed little ones in the 1960s to imagine themselves as Minnie Mouse, Snow White, Bambi, Wolfman, Green Hornet, the creature from the Black Lagoon, Huckleberry Hound, a character from The Munsters, a Raggedy someone, a Ditko-era Spider-Man or whichever Beatle they’d like.

As much fun as ringing in those sweet sheaves could be, it was the anonymity the night afforded that thrilled me most, stepping into a new identity if only for a few hours.

Consistent with my lazy nature, once I’d outgrown the kiddie costumes I just threw on some of my father’s ill-fitting clothes, dirtied up my face with coal dust and meandered around Latham Park dressed like a bum, my brown paper sack open for an outpouring of Atomic Fireballs, Pixy Stix, BB Bats, Nik-L-Nips, DumDums, Mary Janes, Chick-O-Sticks, Smarties, Lemonheads and, my fave, tiny boxes of Red Hot Imperials (lightly fused together by the humidity). Destined to languish at the bottom of my bag: candy corn, butter-flavored Werther’s and Necco Wafers. Oh how I despised those chalky Neccos!

Dear ol’ Dad kinda resented the implication when, the very next year, I again dressed like a bum from his wardrobe, only this time with a Ben Cooper Nixon mask. That was 1969, my favorite October 31 of all time.

Conditions were right that year for a perfect Halloween night. It was a Friday, for one thing, and the streets were illuminated by a waning moon with temperatures in the mid-50s. In an effort supported by the school district, our “woke” elementary students chirped, “Trick-or-treat for UNICEF,” and coins clanged into metal containers for the benefit of impoverished children around the world.

What I was really looking forward to, after amassing my sugary lucre, was the WSJS (now WXII) Halloween Spooktacular. Host Bob Gordon and the Channel 12 news anchors were made up to represent filmland’s famous monsters, who then formed a roundtable “fright-together” for live segments airing between four of Universal’s greatest noir classics: Frankenstein, Dracula, The Mummy and Son of Frankenstein.

Bob Gordon (real name Robert Gordon Van Horn) was the type of all-purpose broadcaster that modern television has no use for any longer, with an uncanny ability to effortlessly fill screen time with no script and no ego. On those boring Saturday and Sunday afternoons from the mid-1960s until the mid-1970s — before live televised sporting events became practical — there was Bob Gordon Theatre on Channel 12, a 4 to 5-hour mish-mash of former primetime sitcoms and dramas, often with a sci-fi bent. Between the reruns with just a table and two chairs for a set, amiable Bob interviewed local oddballs like Clay Kimble, a grown adult comic book collector (such a person existed?!?) who visibly winced when Bob bent the spine on his pristine copy of Captain America No. 1.

While my eyes were glued to the tube, teenagers were flocking to the South Drive-In on Highway 29 for a dusk-to-dawn schlock fest featuring I Was a Teenage Frankenstein and Werewolf. Meanwhile, at the Golden Gate (in the likewise named shopping center), $1.50 was the price of admittance for their midnight double feature of The Witch’s Horror and The Living Head. At no additional charge, you could even interact with The Living Head — “Alive for centuries without a body!” — in person. As patrons entered the darkened lobby, ushers handed out free “fright pills” so the weak at heart could handle the terrible suspense.

They should have had some of those chill pills on hand at the Carolina Theatre’s late-night screening when skirmishes broke out among the 750 guys and ghouls in attendance. One 19-year-old (you know who you are) was even arrested for “disorderly conduct.” Quelle horreur!

(Those of a hipper persuasion were no doubt attending the Jerry Butler concert at the Coliseum, where The Delfonics and The Intruders were the opening acts.)

Trick-or-treating had grown so popular by 1969 that somehow, sans digital connectivity, kids from miles away knew exactly which houses were handing out full-sized candy bars or rare treats like candied apples. They would arrive by the carload, then vanish like Claude Rains. As parents ran out of treats and raced to the market for more, there were none to be had. That would never happen again.

Around 1970, reports of a dubious nature surfaced: razor blades secreted in candy, Ex-lax substituted for chocolate, needles embedded in Wax Lips, Jujubes laced with arsenic. Medical centers began offering to X-ray candy bags for foreign objects. As it turned out, those fears were largely urban myths but became so deeply rooted in Halloween lore that, by the 1980s, parents were accompanying their young ones up to familiar doors, family and friends only, with no chance of Stranger Danger.

One could argue that trick-or-treat is just another carefree aspect of American youth that Boomers squandered before screwing it up for everybody else. But I can still enjoy those Universal monster movies on a crisp October night. OH

Billy Eye, who wrote a bi-monthly column covering the East L.A. music scene from 1980–83 (the source for his book, PUNK), is OG — Original Greensboro.