“How can a nation be called great if its bread tastes like Kleenex?” ― Julia Child

This month Eye offer up a Bento Box of brand-new places to dine and shop downtown that you may not have discovered yet.

Despite an oddly placed apostrophe, Los Chico’s brings great-tasting Mexican fare back to downtown for those who still yearn for the days of Tijuana Fats. Located in the old Meyer’s building at South Elm and February One, Tex-Mex lunch fajitas at Los Chico’s are a pleasing combination of carne asada strips and multicolored peppers wrapped in freshly made tortillas. I especially enjoyed the rich flavor of their frijoles. Street tacos, sopes, gorditas and tortas (Mexican sandwiches) are authentically prepared and taste muy deliciosos, as is does the menudo and caldo de res (traditional beef soup with potatoes, corn on the cob, squash and cabbage) available on weekends only.

Come to think of it, the last time I ate at Los Chico’s I didn’t eat there at all. No harm, no foul — the waiter took my order, that was handled efficiently enough, only my food never arrived so I tossed a few bucks on the table for the salsa and water then wandered farther down South Elm to dine at one of my fave new places, Bonchon. But I’ll be back! 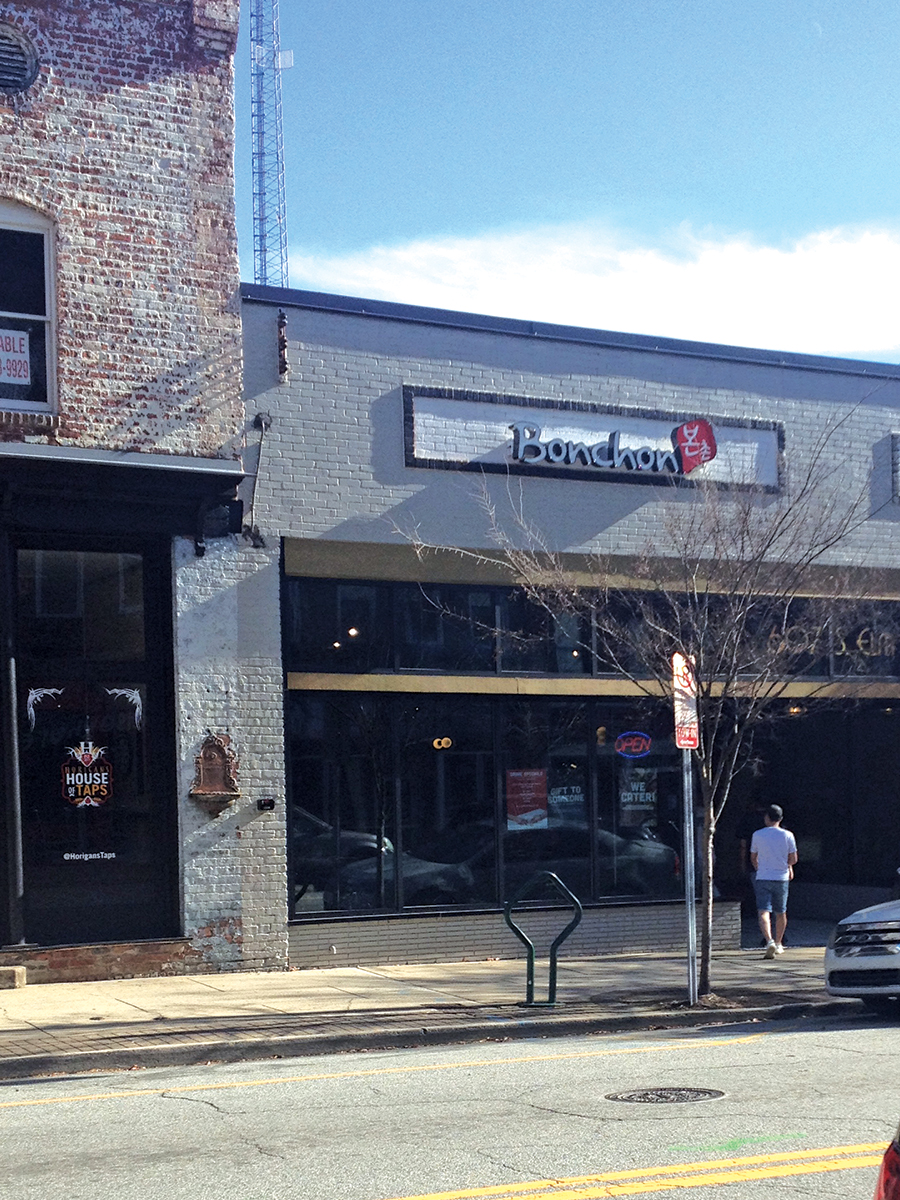 A few doors north of Mellow Mushroom, Bonchon is an international Asian Fusion chain best known for their Korean fried chicken. To tell the truth, there are so many other delicious dishes on the menu, I haven’t sampled Bonchon’s signature dish yet. I savored their sesame-ginger salad topped with a crispy cooked serving of salmon. Another time I gorged on delicious bulgogi (thinly sliced marinated ribeye sautéed with mushrooms, scallions, and onions served with rice). Their Bibimbap was rated No. 40 in the 50 most delicious foods according to a CNN Travel reader’s poll. Bonchon’s menu is extensive; finally, a place downtown that serves a proper Udon noodle soup capped with sesame oil, nori and toasted sesame seeds. I particularly like the seafood version with shrimp, calamari and scallops that’ll warm you up from the inside out.

Located where Ganache once was, more recently LaRue Elm, I’m captivated with this restaurant even though I’m not a fan of smoked meats generally. The flavor profile can at times be overwhelmingly artificial but not at Smohk’d. Their brisket, St. Louis ribs, pastrami, pork shoulder and chicken wings are seasoned with a pleasing combination of garlic and herbs then smoked for about four hours for a well balanced taste. There’s even an “impossible” meatloaf for our meatless friends.

Order à la carte or assemble a plate consisting of your choice of protein, sauces, two sides and bread for around $12. I heartily recommend the Texas brisket with a side of homemade horseradish sauce, baked beans, collards, and sweet-and-spicy cornbread. Booths are wide, easily accommodating six to eight diners each with long, hardwood community tables for larger parties, as well as a private dining area upstairs for more intimate affairs.

One recent Sunday, our party lucked out when the chef was experimenting with prime rib, which may be added to the menu by the time you read this. If so, ask for the prime rib sandwich consisting of four large chunks of perfectly roasted beef wrapped in a hoagie roll with mayo, lettuce and tomato. Heavenly! 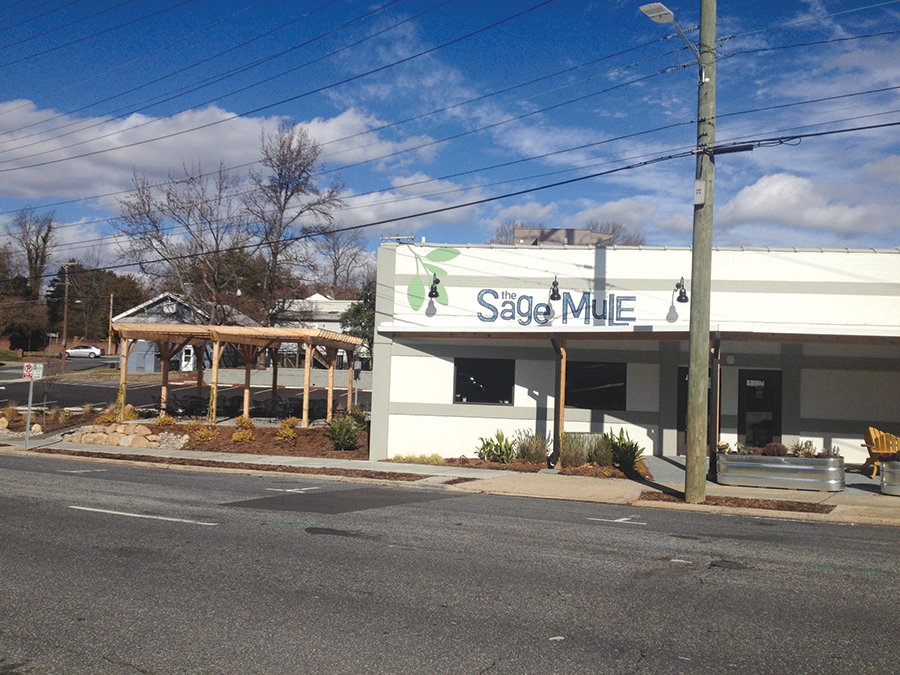 Restaurants can typically take months to build a following, if they’re lucky enough to survive at all. Not so with The Sage Mule, only open a few weeks, this comfy bakery and bistro has been buzzing with excited, hungry patrons from the very start.

Forming a triumvirate on Battleground, along with Preyer Brewery and Machete (where Crafted — The Art of Street Food used to be), The Sage Mule is open for breakfast and lunch beginning at 6 a.m. — although I doubt many of you are up that early to milk the chickens or whatever one does at such an ungodly hour.

It’s a casual atmosphere, you order at the counter then find a seat inside or on the large outdoor patio. How could you possibly go wrong starting the day with a simple Blue Plate Special, perhaps a breakfast cassoulet (white bean and stout ragout, Carolina chopped pork, fried eggs on focaccia), or avocado toast with poached egg? For lunch a friend and I truly enjoyed the Salmon Niçoise Sammie and old-fashioned flat top burger. Fresh breads and baked goods are also on the menu.

In addition to these new eateries, downtown is now home to four barber shops (at Rock’s Hair Shop you can enjoy a cold brew as you get a close shave) while work is nearing completion on a six-lane bowling alley/bar on the corner of East Lewis and South Elm, where that Hoarders-like junk shop had been doing business since at least the 1980s.

There’s also an ethically sourced clothing store, Mindful Supply Co., on the only strip of storefronts that survived the devastating 1980s fires that decimated South Davie Street (I can almost hear Old Photo Specialist Bill Heroy saying, “Why is Billy Eye so obsessed with those fires?!?”).

A UNC-TV documentary described Mindful’s supply chain as, “Dirt to shirt.” Co-owner David Grubbs tells me, “We offer completely sustainable goods, 100 percent North Carolina Cotton. The message is sustainability, traceability, knowing where your products come from.” Not only is the cotton grown in state, it’s ginned, dyed, and printed locally as well. David Grubbs and partner Derek Glass even design their retro-activewear on the premises at 335 South Davie, including T-shirts that celebrate The Boro. You have to check this place out. There’s something for the entire family.

Local party band Grand Ole Uproar will be performing at The Crown above the Carolina Theater on February 9th, opening for Nashville’s The Southern Gothic, who were named “Artist on the Verge” in Billboard’s Best Bets after debuting at No. 1 on its Heat Seekers List.

Grand Ole Uproar describes their style as a musical gumbo conjuring up, “the Texas twang of Waylon Jennings and Doug Sahm, the electric carnival of Dylan, the improvisational impulses of the Grateful Dead, and the laid-back swampy sound of JJ Cale.” This promises to be a terrific night of original music.  OH

Billy Eye is a major contributor to a 600-plus page oral history just published by Mikey Bean entitled Phantoms: The Rise of Deathrock from the LA Punk Scene that details the emergence of the Goth scene in America. Go figure. . .