Where Everybody Knows Your Name — and Game

“Once you’ve started for the end of the rainbow, you can’t very well turn back.” — Cecil Beaton

I’m sharing
a table at Freeman’s Grub & Pub with proprietor Jessie Kirkman, perhaps the most successful restaurateur you’ve never heard of, talking about what it takes to make it in an environment where most ventures fail in the first year. “There’ll always be people with a dollar and a dream,” she tells me somewhat wistfully. “But they have no idea what they’re getting themselves into.”

Freeman’s is a relatively recent but highly successful culinary detour for Jessie, the guiding force behind Jake’s Billiards, a Greensboro institution where, if everybody doesn’t know your name they certainly know your game. The only place I know where aging hippies and glorified hipsters party harmoniously alongside students, day laborers, architects, musicians, salespeople, you name it. An alchemic mix of disparates drawn inexorably, though not entirely by accident, to Jake’s Billiards.

Originally known as Rack’m Pub & Billiards, a joint located on Battleground perpetually behind the eightball with (so the story goes) numerous Alcoholic Law Enforcement violations back in 1991, a smoky establishment rechristened “Jake’s” four years later after regular customer Jacob Segal acquired the place.

Jake’s Billiards banked off of at least three different locations before finding its permanent side pocket on Spring Garden in 2002. “I was a server at a few places around town and, of course, everyone hung out at Jake’s,” Jessie tells me. “I fell in love with their bartender, Josh. He’s now my husband.” By that point, Jake’s had earned a reputation for their solid menu at an unbelievably low cost. “That’s actually why I started going there,” she confesses. “I was vegetarian and it was the only place to get quality good food.”

Jacob passed away in 2004, that’s when Jessie and Josh purchased the business. “It was really rough for a while,” Jessie remembers. With a graduate degree in economics she hammered out the paperwork that was in utter disarray, bringing the operation into alignment when, as if on cue, a bartender didn’t show up for his shift one day. “Well . . .” she reasoned, “I know how to ring everything in and I know how to bartend so I just sort of took over the place and quit all my other jobs.”

Refusing to fall prey to conventional wisdom suggesting that Jake’s Billiards needed gimmicky promotions, karaoke nights, beauty contests, or punk bands thrashing against one wall to attract crowds, “I wanted it to be word of mouth,” Jessie insists. “The people that like us will tell their friends [and so on].” Food was a key element and margins were incredibly tight at first. “I remember going to Sam’s Club to buy $300 in food and we’d do $300 in sales. Then I had to go out and get $300 more food.”

The pub side may not have been generating a profit but burgers, wings, quesadillas and top-flight bartenders kept customers hanging out, playing pool, buying drinks. “My husband ran the kitchen and I ran the front of house.” Skillful execution not high concept, Jessie believed, would grow the business. “For the longest time, Josh and I survived on tips because we took very good care of our employees,” she says. “We offered insurance way before we had to.” Of those early years she says, “It took everything from us to be able to do that but it kept employees there and feeling valuable. They don’t teach you that.”

Around 2011, Jake’s Billiards expanded to fill the enormous building they had been leasing only half of. The couple had to spend hours clearing away dust and debris each morning but, even during construction, “We were still open,” Jessie remembers. “I’d reach over the bar to grab somebody a Miller Lite while they’re tearing down the wall between the two places.” 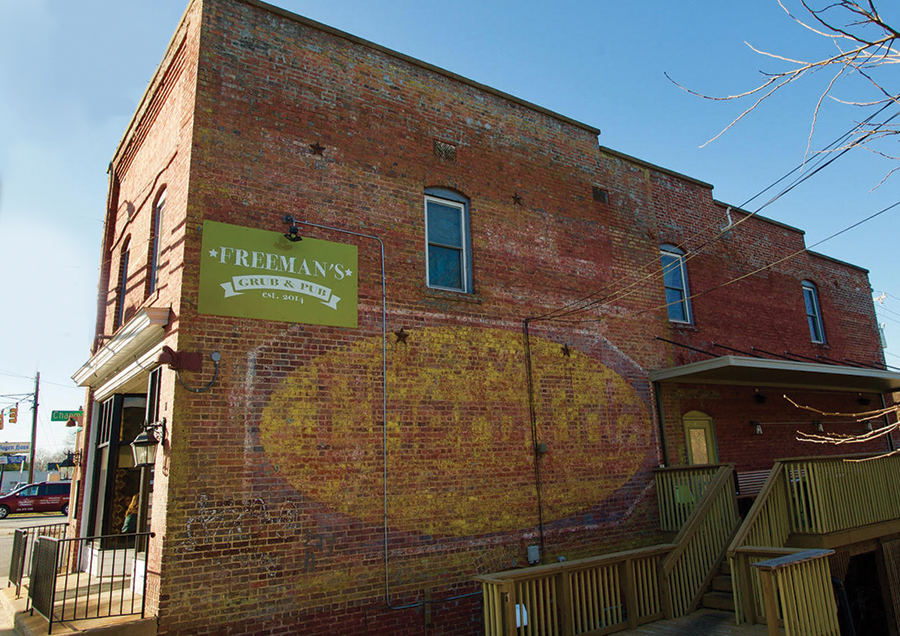 After the expansion Jessie was equipped with a proper kitchen, able to prepare more adventuresome fare like Spicy Wontons (jalapeño, cream cheese, corn and grilled chicken), Angus Mushroom Swiss Burgers, Baja Tacos ($2 on Tuesday) and my persona fave, Cobb Salad (for less than 5 bucks). You know how hard it is to find an authentic Cobb Salad at any price?

“We had a chef who was very creative,” she recalls. “The next thing you know we’ve got avocado aioli and mangos in here for mango salsa.” Just about everything, right down to the dips and sauces, is made from scratch in-house. It’s not uncommon for NFL athletes or touring musicians from the nearby Coliseum to blend in late night at Jake’s. I can’t think of anyone who doesn’t feel at home there and it all works precisely because of that peer-to-peer business model.

Not to mention, pool is that rare pastime attracting devotees both serious and casual from across all nations. “You’ll have a table with people from India, from Germany, people just get together,” Jessie has noticed. “This rich retired man and a plumber on his lunch break, you’d never think they’d talk to each other. The next thing you know they’re playing pool together. It’s a spider web of beautifulness.”

Growing from eight employees to 75, with 69 taps and almost 200 varieties of beer alongside an arsenal of liquor, Jake’s became the No. 1 ABC account in North Carolina outside of Grove Park Inn and the Charlotte Douglas International Airport. Every aspect of the business is thriving as Jessie points out. “After the smoking ban, our food sales were 10 times what they were.”

When a former mom-and-pop grocery store built in the 1920s became available in 2014 just a couple of blocks west from Jake’s near the corner of Elam and Spring Garden (then serving as home to Sessions coffeehouse), the Kirkmans purchased it. They did so with no intention of opening a restaurant. “We closed on the building December 31st,” Jessie tells me. That was the day after being told Sessions wouldn’t be renewing their lease. “So we sat on it for about a month.” Because the property wasn’t zoned for a bar, Jessie realized, “We had to do a restaurant and it would have to open within a year to be grandfathered in for handicap issues and the parking lot, things like that.”

From the beginning, Freeman’s (named after that aforementioned grocery store) has been garnering the sort of reviews a restaurateur dreams of, diners raving about their mojo pork Cubans, braised collards, chopped sirloin Banh Mi, and fried chicken you’d slap Aunt Frannie for. “For the first year I shoveled money down here from Jake’s,” Jessie says. “But I don’t buy anything that’s not quality, I won’t sacrifice anything to make a dollar.”

She had the luxury of staffing Freeman’s with the best and brightest from Jake’s. “I needed a dream team down here.” While we were talking, I glanced into the kitchen as the staff was prepping for the lunch crowd, the crew smiling, laughing, clearly having a good time. “Restaurant people in general, we’re a different type of people,” Jessie says. “It’s in our blood and we’re not going to be happy at a desk. We thrive on chaos.”

This is all quite an accomplishment when you consider what else she has on her plate: “My husband and I adopted two children when we opened Freeman’s. They didn’t die so we decided to have our own,” she quips. “They’ve really changed the dynamic of our lives. It showed me that there’s more to life than a restaurant.”

Meanwhile, Jake’s Billiards never closes. Neither snow nor rain nor blackouts nor holidays will keep their loyal players from their appointed rounds of pool. And Super Bowl Sunday — fuhgeddaboudit. No need for Bar Rescue here. Jessie could teach Jake Tapper a thing or two. “I cannot watch that show without having extreme anxiety because I can’t jump into the TV and fix things!”  OH

Billy Eye can be found at the bar.