(And a birthday surprise, to boot)

I was lunching with brother Hank and sister Rives at Oakcrest Family Restaurant, where the food is excellent by the way; their prime rib sandwich and spaghetti come highly recommended. And so very inexpensive, especially when you consider my brother picked up the tab. (Someone had to!) Taking photos outside the entrance, everything has to be documented these days dontcha know, I glanced across the street where, to my surprise, I noticed Greensboro mainstay Higgins Cycle Shop had packed up and gone.

In 1972, Glendi moved into his brand-new flagship Schwinn superstore on Battleground, back when 10-speed Paramount racing bikes were hot, featuring now-familiar lowered-below-the-frame, backward bending handlebars. In my adolescent imaginings, Higgins was one of two businesses, Carolina Camera being the other, where the cool kids worked.

A revered diner frequented by just about everybody over the last 45 years, Tex & Shirley’s, was an integral part of an expanding Friendly Shopping Center in the ’60s, originally as Uncle John’s Pancake House, a nationwide franchise. (issuu.com/ohenrymag/docs/o.henry_august_2012/29). In 1969, Slater “Tex” and Shirley Moore were transferred from Michigan to manage the Greensboro location, with its distinctive modern faux-colonial facade found at every other Uncle John’s. The chain began to collapse three years later so the couple bought the eatery and gave it a new name.

This casual corner on Pembroke, was for as long as anyone can remember, the kind of place you never needed an excuse to escape to, somehow thriving both as a wholesome family destination and a reliable hangover hangout.

The Moores sold the coffee shop to longtime associate Bart Ortiz in 1989. After his father retired, Bart Ortiz Jr. took over the operation; it was nice meeting him on one of Tex & Shirley’s last nights at Friendly Center. Weeks later the building was bulldozed away, with it a lifetime of memories. It seems rising rents, thanks to the success of The Cheesecake Factory, necessitated relocating to their new Plaza Shopping Center location. This split-level spot was Ivanhoe’s restaurant in the 1960s and, two decades later, a seminal live music venue, The Underground. I still miss that club!

That movie theater on Tate Street was one of my fave places back in the 1970s. I wasn’t around when it opened in the summer of ’42 as Victory Theatre but, since 1958 when it became Cinema Theatre, it was managed by Eugene Street, by all accounts a well-liked curmudgeon who always had a stogie hanging from his lips; the guy roasted the popcorn the old-fashioned way, up in his office. Peter Fonda attended a screening of Easy Rider here in 1968. It’s where this teenager caught offbeat films that other theaters passed on like The Man Who Fell to Earth, The Getaway, and A Boy and His Dog. In an era of diminishing screen sizes, it was a treat experiencing motion pictures the way they were intended to be viewed.

Cinema Theatre was sold in 1976 to the owner of the Janus and Terrace Theatres to become Janus Wings. Another relaunch in 1980 as College Hill Cinema was short-lived, followed quickly by House of Pizza-Cinema run by Odis Alexious, a fondly remembered joint where movie-goers consumed beer and pepperoni slices with the lights down low. In the afternoons, All My Children was projected on the big screen, according to one account. That venture lasted for about four years before the movie palace closed for good. The building had been abandoned and deteriorating since longtime tenant Addam’s University Bookstore vacated the premises years ago, that is until construction began on the property in January.

That fabled theater, along with the former pool hall next door, is once again buzzing with activity, newly refurbished and repurposed as rehearsal and performance spaces for UNCG’s music and drama majors. This outlier also offers an opportunity for students to become more integrated into Tate Street culture, which by my reckoning, comes about half a century too late.

What a remarkable night this was! Ever attend a surprise birthday party for a friend in a public place but, instead of yelling “Surprise!” when the man of the hour makes his entrance, everyone totally ignores him? A demented idea from provocateur Nathan Stringer led to a surreal moment for unsuspecting airplane builder Brian Burbach as he entered Rioja Wine Bar with girlfriend Colleen Fitzgerald, almost immediately noticing family and friends all around enjoying vino and finger food, yet no one was paying the least bit of attention to him. For a minute or so, Brian and Colleen (who that day graduated magna cum laude from UNCG), sat at the bar attempting to process the situation, a scene right out of The Outer Limits. Has anyone ever been more perplexed?  OH

Billy Eye can be reached at billy@tvparty.com. 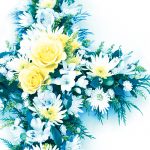 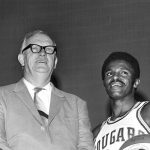