The Rise of Roussillon

Where red wine is roi

Roussillon has been the redheaded stepchild of the French wine country for many years, a fact that is slowly changing due to the efforts of several ambitious and talented importers and winemakers.

This region connects Spain and France with the Mediterranean to the east and the Pyrenees Mountains to north, west and south.

The most important red grape grown in this region is carignan, accompanied by grenache noir, cinsault, syrah, mourvedre and some obscure local grapes. Red wine is king here, although they do produce about 25 percent rosé wines but only 2 percent white wines. Grenache blanc, roussanne and marsanne are the most popular white grapes grown.

The wines of Roussillon have been considered unremarkable for centuries, but 10 years ago, rock star importer Eric Solomon of European Cellars began to focus on the area. He previously imported wines mostly from Spain and other pricier areas of France such as the Loire Valley and the Rhône region. Ten years ago, Solomon met Jean-Marc and Eliane Lafage in Spain, where Jean-Marc consults with some Spanish wineries. Lafage suggested Solomon visit his vineyards in Roussillon, and a beautiful partnership was formed.

The Lafage family owns almost 400 acres of vineyards in various sections of Roussillon benefiting from the diversity of soil compositions. The knowledge and dedication of Lafage combined with the incredible palate and direction of Solomon have created wines that, in my opinion, raised the bar on quality/price ratio. An added bonus is that everything is farmed organically. Robert Parker, famous critic and owner of The Wine Advocate, says of Solomon, “I first tasted with Eric in 1991 and I have watched him grow as an importer to the point where he may be the finest in the United States.”

One of their projects in Roussillon is Saint Roch, a property in Agly Valley. The white they produce is Saint Roch Vieilles Vignes Blanc, a blend of grenache blanc and marsanne. It’s very rich and full-bodied with pronounced notes of tangerine and pineapple. As big as it is, it still pairs beautifully with food and usually sells for under $15. One of the reds from Saint Roch that I tasted is the 2014 Saint-Roch Chimères Côtes du Roussillon Villages. This wine is under $17 yet was awarded 92 points from Parker, who described it as mostly grenache, but including 30 percent syrah and 10 percent mourvedre. “Aged in a combination of concrete tank demi-muid (large oak barrels), it makes the most of this difficult vintage and has terrific purity in its raspberry, violet, licorice and olive-laced aromas and flavors. Ripe, nicely textured and with bright acidity,” wrote Parker.

The Lafage estate produces a Miraflors Dry Rosé that is an organic blend of mourvedre and grenache gris. It is a must-have for summertime quaffing. It has gorgeous notes of strawberries, framboise and rose petals. At under $18 it rivals the great rosés of Bandol that sell for $40-$60.

Two more reds they produce are the 2014 Tessellae Grenache-Syrah-Mourvedre Old Vines, under $15 and 2014 Domaine Lafage Bastide Miraflors, a blend of syrah and grenache that is under $17. These two wines are the same blends that you would find in Châteauneuf-du-Pape selling for three to five times the price. Parker gave Tessellae 90 points and described it as a remarkable bargain from Lafage. Aged in concrete, this blend of 50 percent grenache, 40 percent syrah and 10 percent mourvedre “. . . comes from 70-year-old vines planted in limestone and clay soils. A delicious, dense ruby wine with notes of red and black cherries, earth, spice, pepper and a touch of Provençal garrigue. Fresh vibrant acidity is also present, and the wine is uncomplicated, but rich, fleshy and very well balanced,” writes Parker.

On Bastide Miraflors, Parker identifies the 2014 Bastide Miraflors, which is a Côtes du Roussillon that blends 70 percent syrah and 30 percent grenache — with the grenache aged in concrete tanks and the syrah in 500-liter demi-muids — as a particularly notable bargain. “Lafage makes more expensive wines than this, but certainly excels with his value lineup. He has really hit a home run with this 10,000-case cuvée,” writes Parker. “It is deep, ruby/plum/purple, with fresh notes of blackcurrants, plums, Provençal herbs as well as licorice. Deep, medium to full-bodied, with amazing fruit, the purity, authenticity and Mediterranean upbringing of this wine are obvious. Quite deep, round and succulent, this wine should drink well for another several years. This is one to buy by the case.”

Clearly, there is a bromance going on among Lafage, Solomon and Parker, but the proof is in the bottles. They are amazing blends. OH 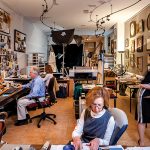 Rising from the AshesFebruary 2017
X