There’s a Book Club for That 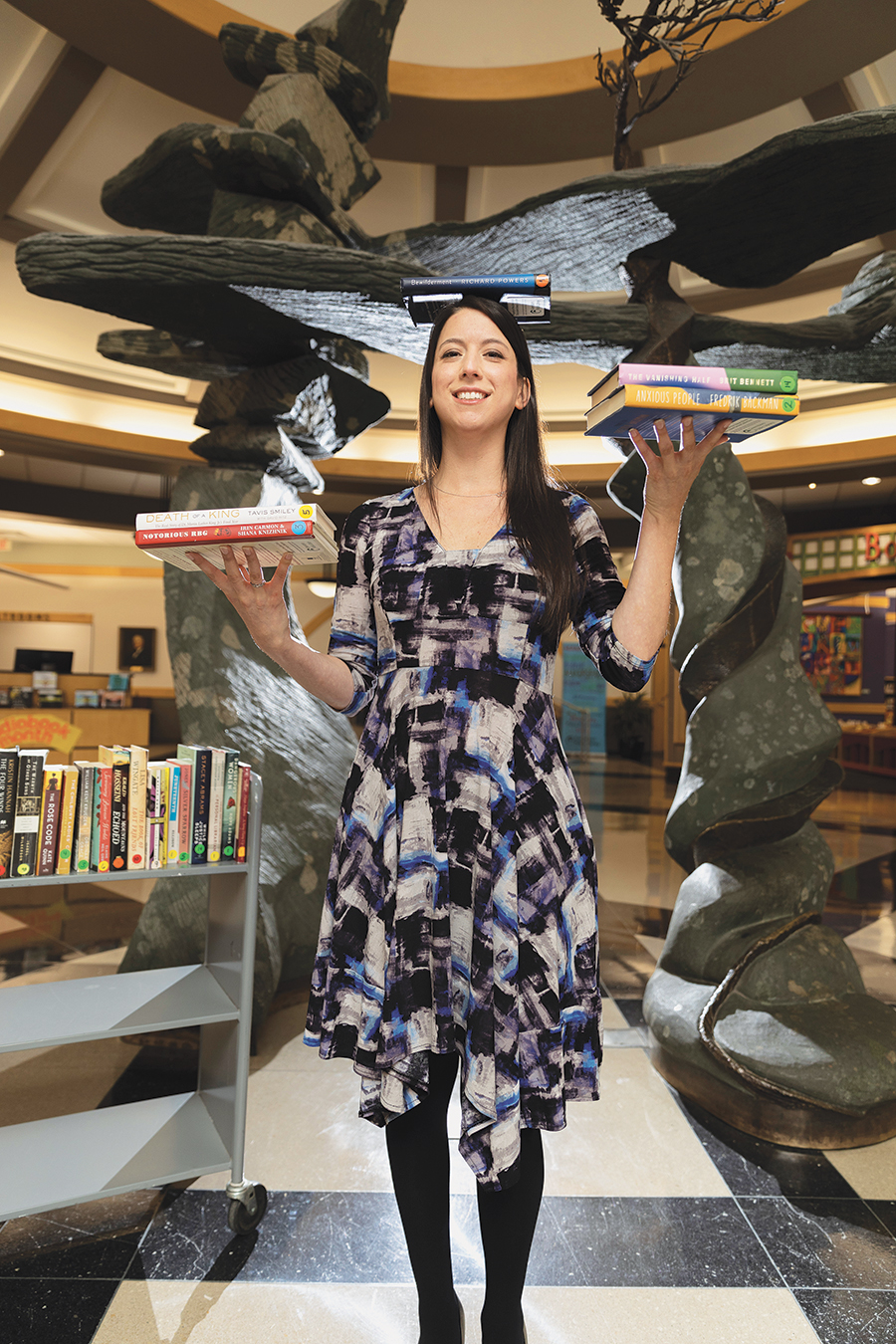 Want to find a local book club? A great resource is the Greensboro Public Library.

I did my snooping at the downtown Central Library, where I met Amy Bacon, 30-something library associate, book lover and avid reader.

“I’ll read a couple books a month, maybe three or four, maybe five in a good month,” Bacon continues. “But there are people in the clubs who read a book every day or so!”

J. K. Rowling was also a big influence. Given Bacon’s age when the Harry Potter novels were published and the fact that her mom was teaching in middle school, the books really resonated.

“When they did the midnight releases,” Bacon says, “there we’d be at Barnes & Noble bookstore, waiting. Mom always bought two copies, because neither of us could wait to read!”

Bacon’s a proud advocate for libraries and book clubs.

“Every time I meet someone new, I ask if they have a library card,” she laughs.

Bacon earned her bachelor’s degree at Appalachian State University in psychology, and her master’s degree in library and information science at UNCG. Shortly after she became a full-time librarian in 2018, Bacon was put in charge of the book club collection, curating it with two other staff librarians.

For starters, there’s the plethora of new releases each year.

Bacon consults places such as Oprah’s Book Club selections, reviews and lists in The New York Times, or Goodreads for new books. Sometimes the leaders of local clubs will email her about forthcoming titles in their particular focus areas.

And the library always tries
to spotlight local and North Carolina authors.

It’s not an exact science.

“Sometimes we have titles that get really popular out of nowhere,” Bacon says. When the novel Where the Crawdads Sing by Delia Owens was released, it checked several book club boxes — good summer read, North Carolina setting, nature, coming of age.

“I thought it would do well, but I didn’t anticipate its fantastic popularity,” Bacon says.

Then there’s the matter of branch locations.

There are about 20 library-sponsored book clubs with a branch library staff person facilitating meetings scattered among these locations. And there are dozens of independent book clubs that also need support, some through retirement homes and senior services, and many through neighborhood and church groups.

Bacon estimates that there are more than 250 book clubs using Greensboro Public Library collections. That’s a lot of serious readers!

“When someone requests a title for a book club set, staff members and I have to consider if other clubs might use it,” Bacon says. “We don’t want to order 15 copies of a book that might only be used once.” She passes along her buy list based on requests and recommendations, along with her own research and experience. The final decision, of course, is made based on consensus with library colleagues and budget allocations.

Library volunteers play a key role in getting book club sets out to readers.

“I don’t know what we’d do without our volunteers,” Bacon says.

Since the pandemic, Bacon has seen a rise in book club participation. While most clubs still meet in person, the library also developed a Zoom hybrid meeting format.

“We’re seeing a lot of people participating now who weren’t before,” Bacon says.

“Because we have such a diverse collection,” she adds, “there’s a book club for anybody.”

“And if there’s not a book club you want to join, you can start your own,” Bacon says. “I can help you either way.”  OH