The Wonder of Color

The Wonder of Color

Let us take a moment — here in this month of mud, bluster and bursting forth — to honor ROY G. BIV.

That’s not a person. It’s an acronym for colors along the visible spectrum of light.

Throw in black and white, and you have the ingredients of every color that any human has ever seen — or ever will see — with unaided eyes.

That’s shocking when you think about it.

We see so few colors.

And yet, we experience such joy in our wee rainbow, in the gradations and textures and juxtapositions with other colors.

It’s all about how they’re arranged.

Here’s the freaky part: the color happens in our brains. Objects have no inherent color — just surfaces that reflect light in different wavelengths.

Basically, the reflected light — a kind of electromagnetic radiation — hits the photoreceptors in our eyeballs, which dashes them off in chemical telegrams to our brains, which decodes them as colors.

From this neurological basis, we discern objects, depth, movement and sometimes awe. Witness the pleasure prompted by these photographs provided by the Piedmont Photography Club.

The club, which has been around since the 1970s, holds quarterly contests for members. These images, gleaned from last year’s competitions, showcase the wonder of color.

So, photo buffs — and photoreceptors — rejoice as we prime our senses for spring and revel in the glory of ROY and company.  OH

Learn more about the Piedmont Photography Club at piedmontphotoclub.com. 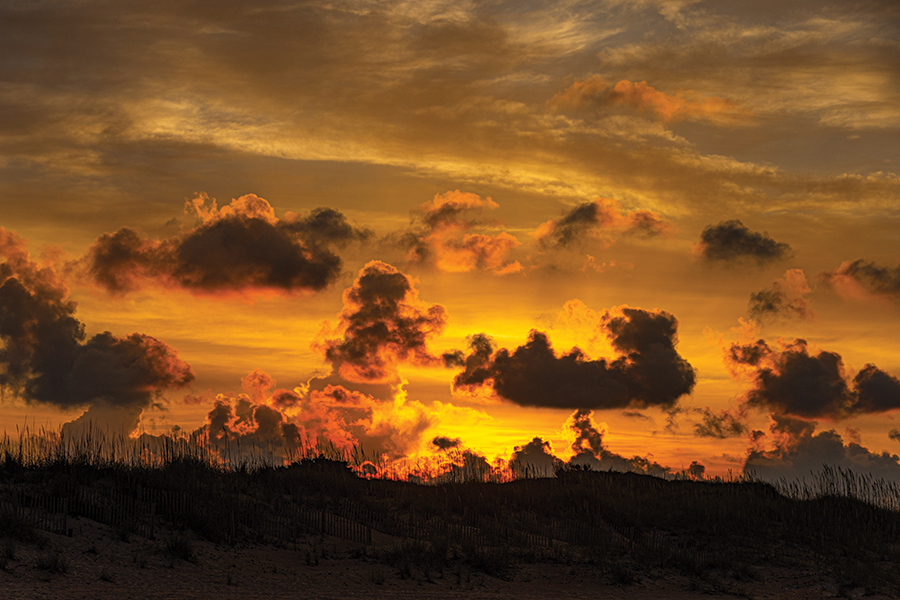 It looked like the sky was on fire. That’s how Renee Russell describes the sunset the night she and her husband, David, got to Atlantic Beach to meet with family last summer. She loved the smoky clouds — “I can see a Viking boat in that bigger cloud,” she says — and bristling sea oats below. Renee, a home-health nurse, has been taking photographs for most of her life, but capturing images has become a passion since David, also a prolific shooter, asked her to join the photography club with him about 20 years ago. Stress dissolves, she reports, when she shifts her focus to captivating scenes and starts snapping. “It’s a challenge, at times, to get the shot that you really see or want somebody else to see,” she says. See the couple’s work at russellphotoart.com. 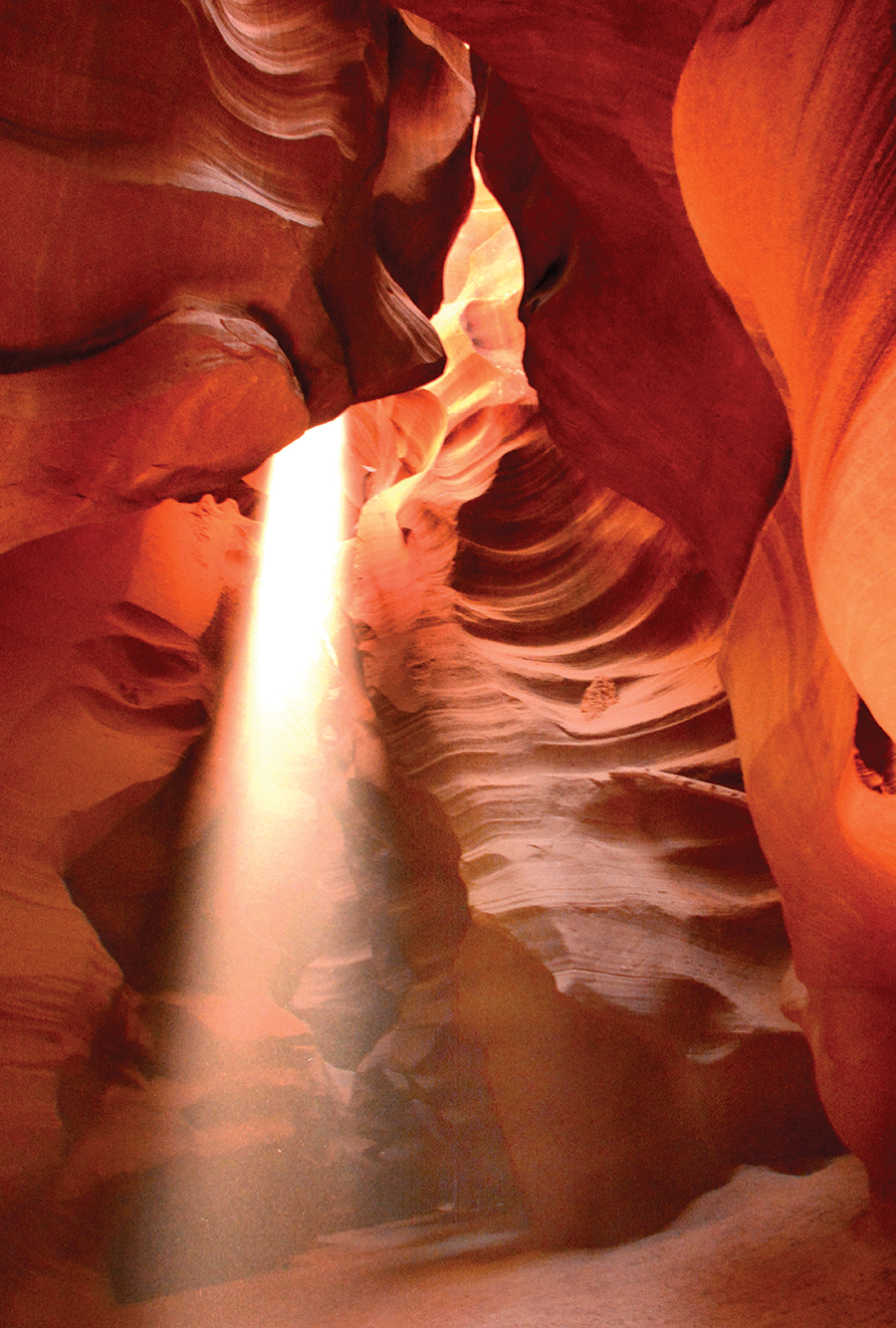 Talk to amateur photographers, and a theme emerges: They squeeze in lots of pictures while taking vacations. Or, more accurately, they squeeze in lots of vacations while taking pictures. A few years ago, Bet Wilson did both while visiting Arizona in late summer, the best time to photograph Antelope Canyon, which is on Navajo land near Vermilion Cliffs National Monument. She booked an excursion into the slot canyon with 10 other photographers. The guide drove them into the rocky hollow and threw up a handful of dust to accentuate the shaft of light that turned water-worn rock into cathedral. “It was one of the joys of my life to capture that,” says Bet. “I just feel so fortunate that I was able to time my trip so I could be there — and it was a sunny day.” 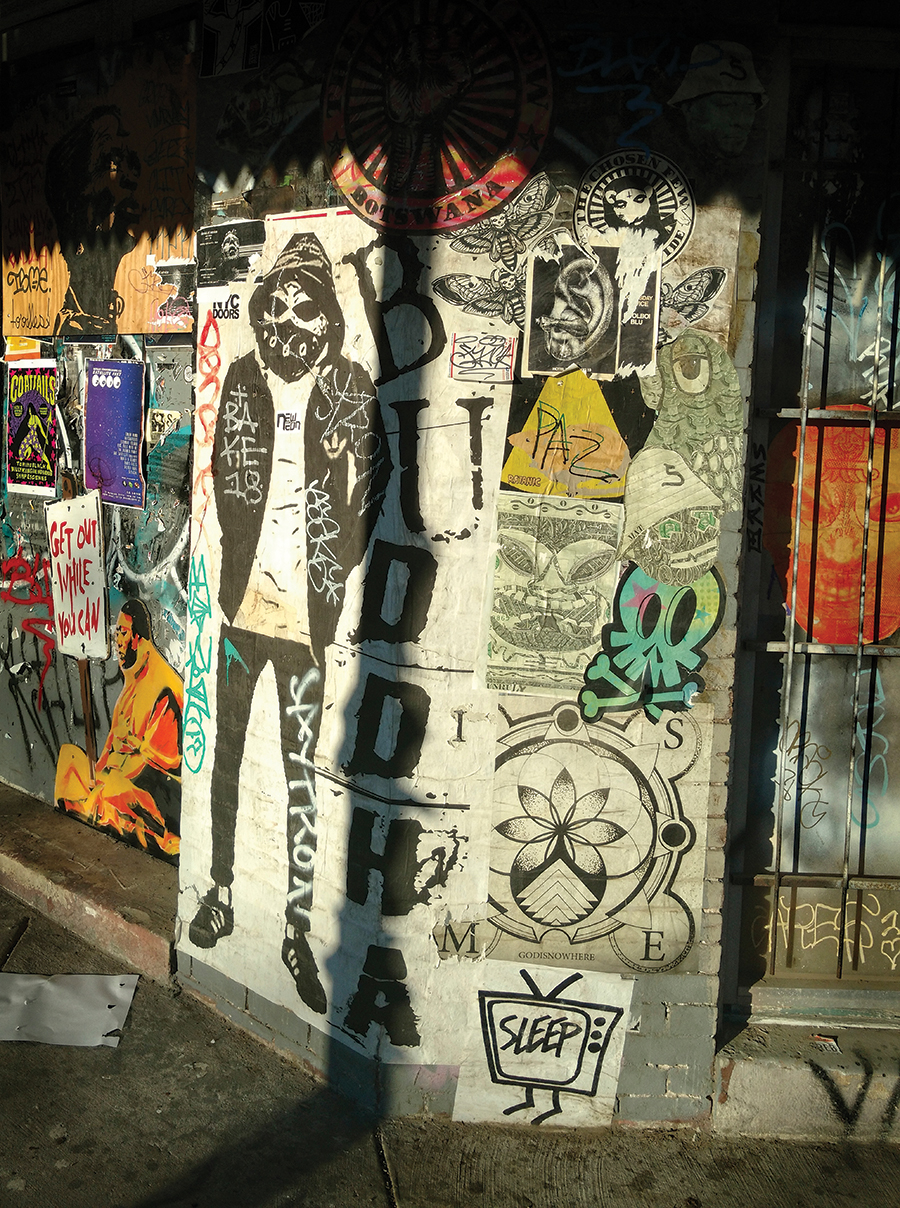 Maybe Bill Cowden wouldn’t notice the masked character today, now that half the world covers its face to filter out COVID, but two years ago, the lithe figure stood out on an art-plastered corner in Austin, Texas. “It wasn’t just junky graffiti,” Cowden says. “It was a lot of interesting different scenes.” Cowden lifted his cell phone and documented the urban tableau. This frame ended up in a club contest. “The competition is friendly,” says Cowden, the group’s president. “Our goal is to help anyone who needs help.” In non-COVID times, the club organizes trips to scenic places around the state, including Lake Mattamuskeet, where snow geese stop during their annual migration. 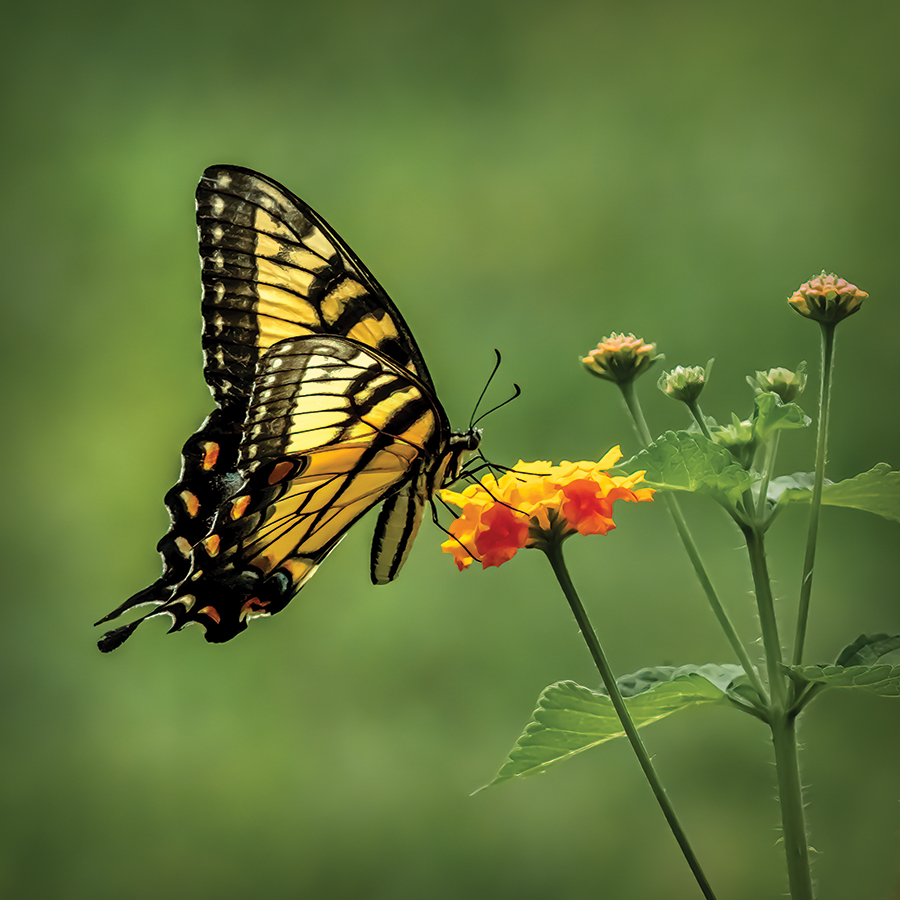 Sometimes, the best photos lurk right under your nose. Or outside your breakfast nook. That’s where Ed Haynes saw this butterfly sipping lantana nectar at sunset. “The backlit wings are what makes that one so good,” Ed says, explaining the challenge of capturing quick-moving subjects in low light. “You gotta get your exposure right. It’s a balance between getting enough light and having a fast enough shutter.” Ed’s daughter, Edie, turned him onto photography a couple of years ago, after Ed retired as a maintenance supervisor at the former MillerCoors brewery in Eden. COVID makes him grateful for his new pastime. “I’m glad I can do something in my backyard,” he says. 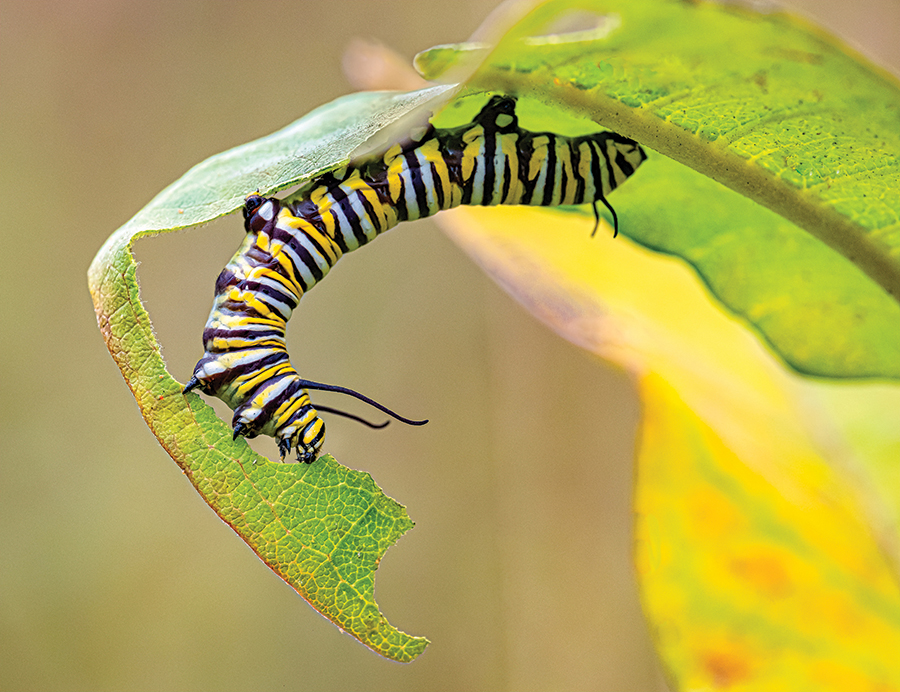 Susan was stalking Monarch butterflies last September when she took the Blue Ridge Parkway to Doughton Park, a stop on a migration loop that stretches from the northeast U.S. and Canada, down to south Florida and Mexico. She caught this Monarch caterpillar mid-chomp. Soon, it would make a chrysalis and emerge to stretch its orange and black wings and finish the trip south. No single butterfly completes the loop; the journey spans five generations. Some monarch lines, fluttering northward after their winter vacations, stop in North Carolina in the spring. Charmed by the moderate climate and milkweed, they might stay for a few generations (the Monarch lifespan is three to five weeks except for those that overwinter; they can live a few months). Others continue to press north for the summer. Come September and October, their progeny reverse course and stop at Doughton Park to gas up on nectar for the long trip to wintering grounds — no time for royal whoopee. Thousands of Monarchs migrate south during that time, but “You’re not guaranteed you’re gonna see anything,” says Susan. “So for me to go on a hunt and see this — and have it turn out as well as it did — that’s pretty special to me.”

On the way from Jackson, Wyoming, to Yellowstone National Park, Franklyn Millman and his wife, Susan Von Cannon, parked their car and took a walk. “The whole road was covered with these yellow aspen leaves,” says Franklyn, “but finding a scene where you have a lot of vertical trunks that don’t interfere with each other . . .” It took some doing. Finally, Franklyn found the frame. “It had a certain rhythm to it,” he says. “I like the simplicity, and of course I liked the color.” A devoted shutterbug and recently retired internist, Franklyn has traveled worldwide. Once, in Iceland, he ventured onto a wind-whipped beach to shoot chunks of icebergs. A giant wave reared. “It knocked me down and submerged my camera,” he says, laughing. He grabbed a backup camera and kept shooting until he bagged a keeper. “Your pulse actually increases, and you say, ‘Man, if I can capture that before it goes away . . .’  Those moments are relatively infrequent, but sometimes conditions are just right and, boy, it’s amazing.”

Boyd was itching to play with his new toy, a 600 mm photo lens. An ideal opportunity came one morning at North Topsail Beach, when he spotted egrets coming and going in a bay behind the island. “You have to get them in focus, lock on and track them while you’re shooting,” he says. “It takes hundreds of pictures sometimes to get the one you’re looking for.” He likes this shot for its simplicity — “There’s nothing to distract your eye away from the bird” — and for the sharp focus on the bird’s pupil. “The eyes are the windows of the soul, I’ve read. Birds are not as much fun as mammals, but there’s a lot there, in birds’ eyes,” he says. 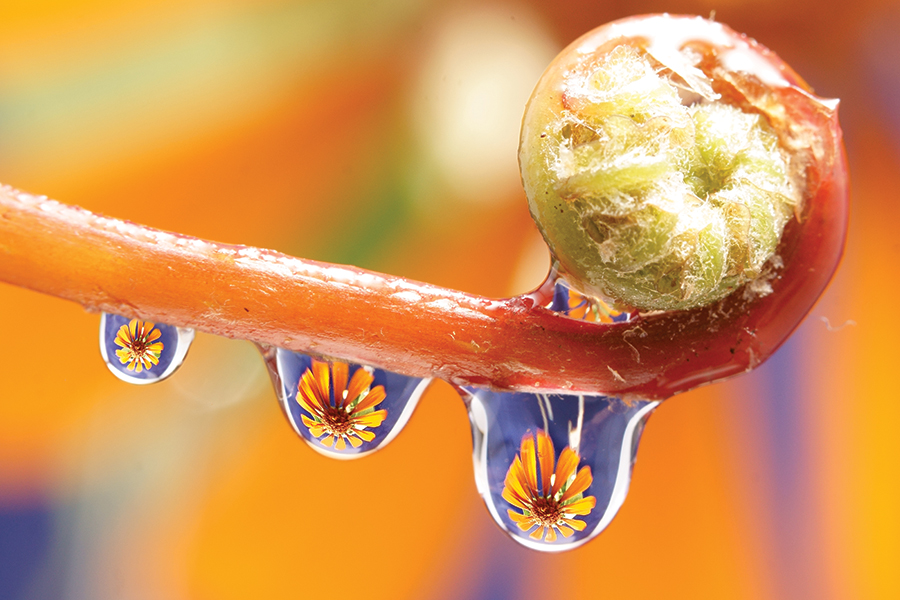 Painstakingly gorgeous. That describes this striking composition, which Sinh Nguyen pieced together at a workstation in his backyard. He snipped an unfurling frond of fern. He positioned a potted flower behind it. He used a syringe to apply drops of water to the fern. He positioned his camera, which was hitched to a Sony 90 mm macro lens, on tripod. He fired the shutter. Again and again. “I took it more or less one hundred times,” he says. “I picked the ten best ones.” Using PhotoShop, he merged the images, preserving the best of each. Thirty years ago, Sinh took a class at the New York Institute of Photography, but he had little money or time to indulge his interest. Now retired, he quenches his thirst for beauty. “I get bored and walk around with my camera and the ideas come,” he says. “I take whatever catches my eye.” 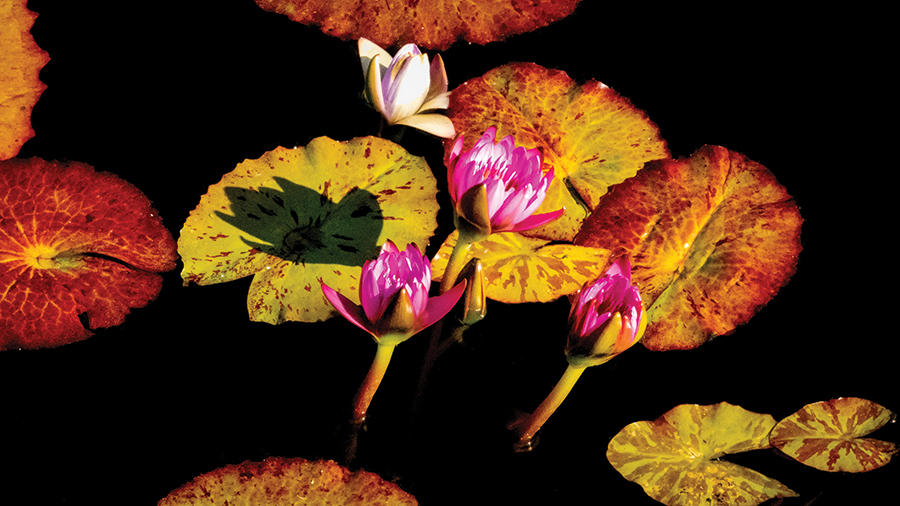 The afternoon sun was tilting toward the golden hour at Brookgreen Gardens in Murrells Inlet, S.C., when these water lilies pinged on Marinella Holden’s photographic radar. “It was just a vivid little area,” she says. “The colors were gorgeous, and the light was right.” Marinella took up photography after her husband, Jerry, was well into it. “I wish we’d taken this up earlier,” she says. “It just makes you more aware of your surroundings. Sometimes you’re not focused, but when you’re taking pictures, you are.” See the couple’s work at jholden1.smugmug.com. 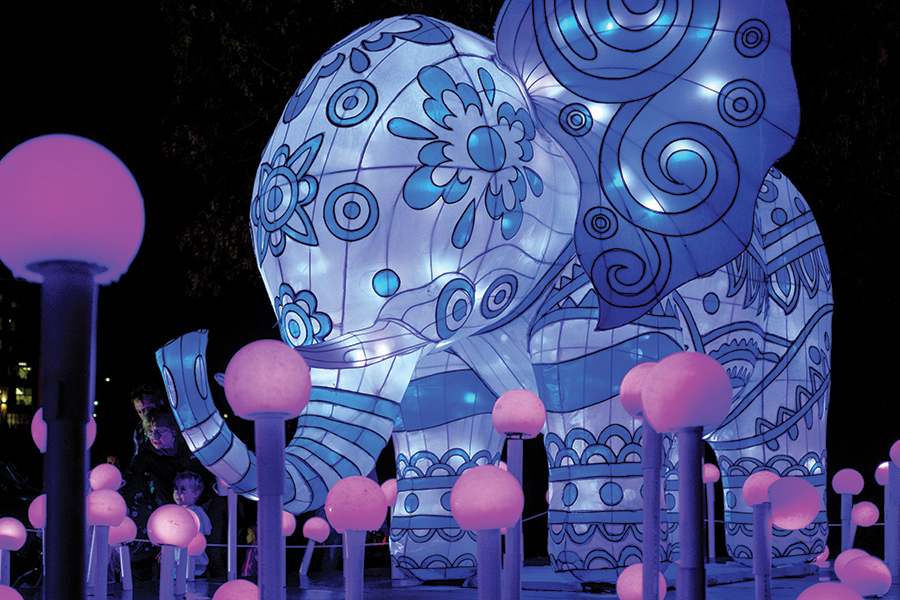 Karen went to the North Carolina Chinese Lantern Festival in Cary hoping to see hues of blue; the photography club was having a contest with one category reserved for subjects of that color.

This puffy pachyderm fit the bill. Karen crouched low and shot upward — “like a little kid looking up” — to include the pink orbs that popped hot against cooler shades. An avid photographer for the last 10 years, Karen enjoys the challenges of the art: the quest to find and frame subjects, as well as the technical process of digital editing. She has learned much from her snap-happy peers. “There’s a lot of really good photographers in the club who are willing to share their knowledge,” she says.