The Pied Piper of Latham

How Jimmy Donaldson has endeared himself to his four-legged neighbors 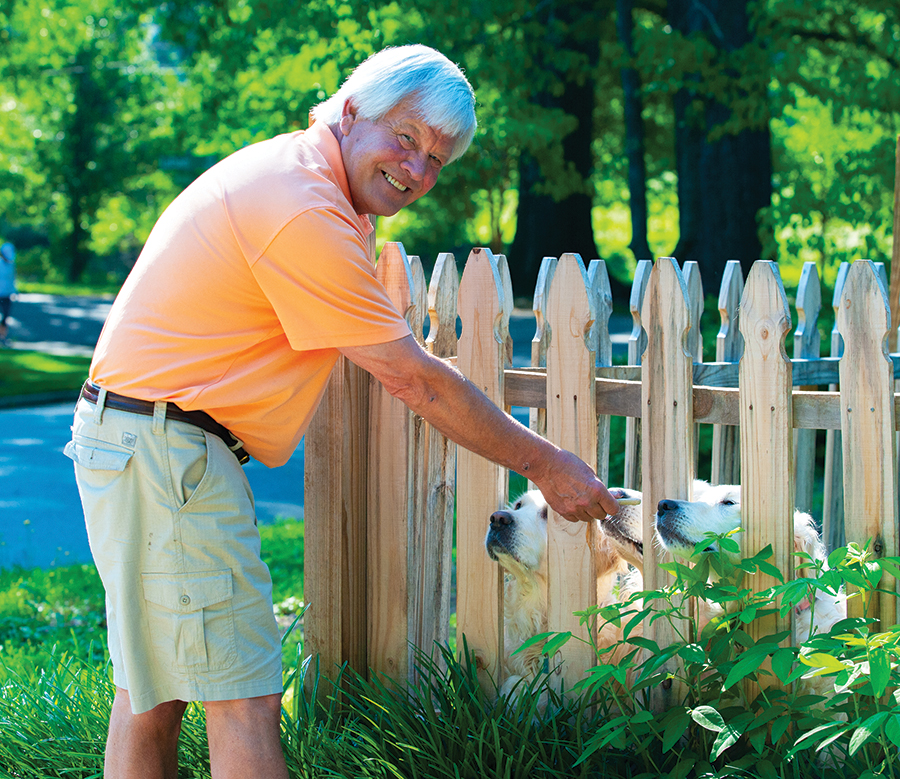 It begins much like the Twilight Bark described in The 101 Dalmatians children’s book and the later Disney film adaptation: As the sun sets, the story’s canine protagonist, Pongo, sounds the alarm to the dogs of London that his litter of puppies has been stolen. His barking signal is picked up by Danny the Great Dane at Hampstead and his smaller yappy sidekick, then transmitted via water pipe by a Scotty to a normally sedate Afghan hound, who emits a howl from an attic window to a pet shop bulldog whose baritone woof is transmitted by a prissy French poodle atop a Rolls Royce . . . and so on until the evening air echoes with the sound of barking and howling. A similar phenomenon occurs every morning in Latham Park as the neighborhood pooches — Scooter, Milly, Archie, Cullen, Dixie and scores of others — respond to a familiar bird call with a chorus of “Woof! Woof! Woof!” that rises to a crescendo of “Roo! Roo! Roo!”

Their excitement stems not from the urgency of a dognapping caper, but the approach of the local Pied Piper, Jimmy Donaldson, his pockets laden with dog biscuits. “I’ve been feeding most every dog in the neighborhood for over 10 years, says the longtime resident who also sees “repeat customers” when his neighbors and their dogs walk by his house up the hill from the park. 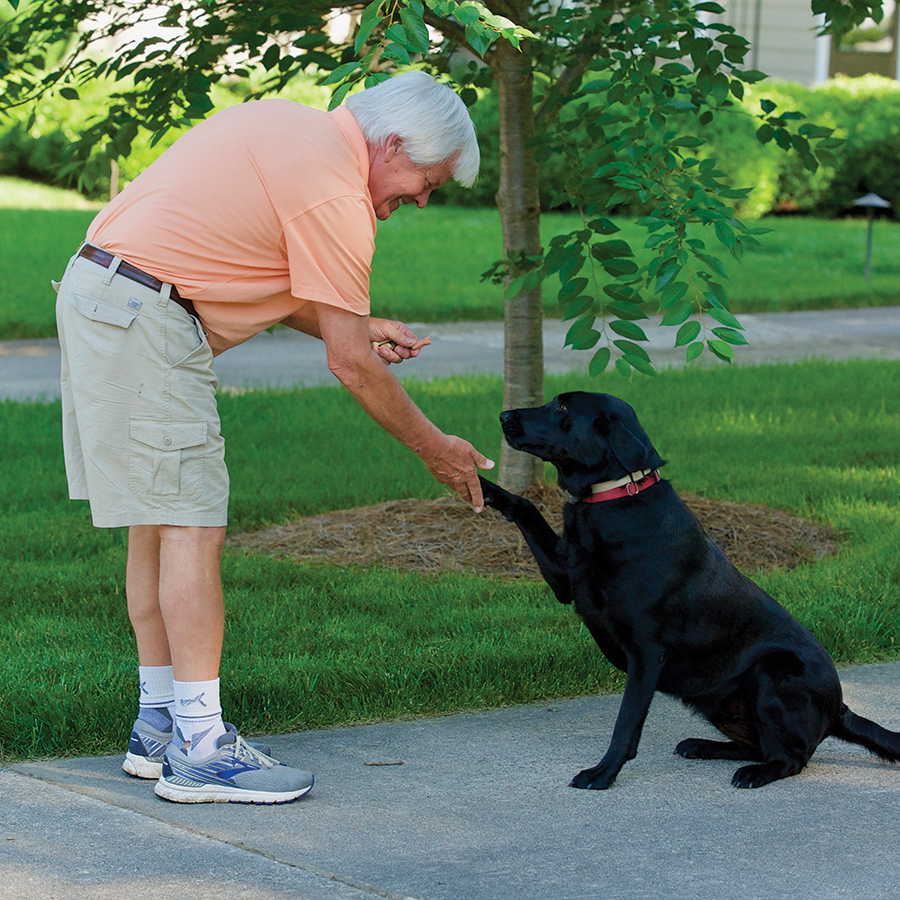 Growing up in the Gate City, Donaldson has always enjoyed walking, having been part of an informal group that included the late Gene Johnston, a Greensboro businessman and U.S. House rep who lived on Granville Road. “We were called the G.I.R.L.S.,” Donaldson says with a chuckle: “The Granville International Relations and Lecturing Society. The Republicans would walk on the right side of the street, the Democrats on the left; we’d walk the golf course [at Greensboro Country Club],” he fondly recalls. But over time the group dissolved, and Donaldson, after enduring six bypass surgeries, knew he had to keep moving. His four-legged neighbors provided him with a solution.

Armed with dog biscuits, typically peanut butter-flavored, and a crow call used in turkey hunting (“The turkeys will gobble when they hear it,” Donaldson explains), the Pied Piper of Latham announces his approach. Babe, a black Lab who belongs to Sterling and O.Henry contributor Susan Kelly, serves as hostess of the neighborhood Welcome Waggin’ Committee, as she trots down the driveway, her tail beating like a metronome set on its highest speed. She stops to extend a paw as Donaldson leans down to give her a biscuit. He says Charlotte, David and Martha Howard’s Labradoodle, is arguably the most enthusiastic: “She wags not just the tail but the whole body!” Donaldson notes. “She’s more interested in the lovin’ than the biscuits.” Across the street is Jackie Prevette’s collie, Mokie. Once, when another dog had escaped the confines of his electric fence, Donaldson tracked him down with the crow call. He describes Tilly, the bird dog, as “standoffish,” but to see her bound across the yard at Donaldson’s call, you’d never know it. 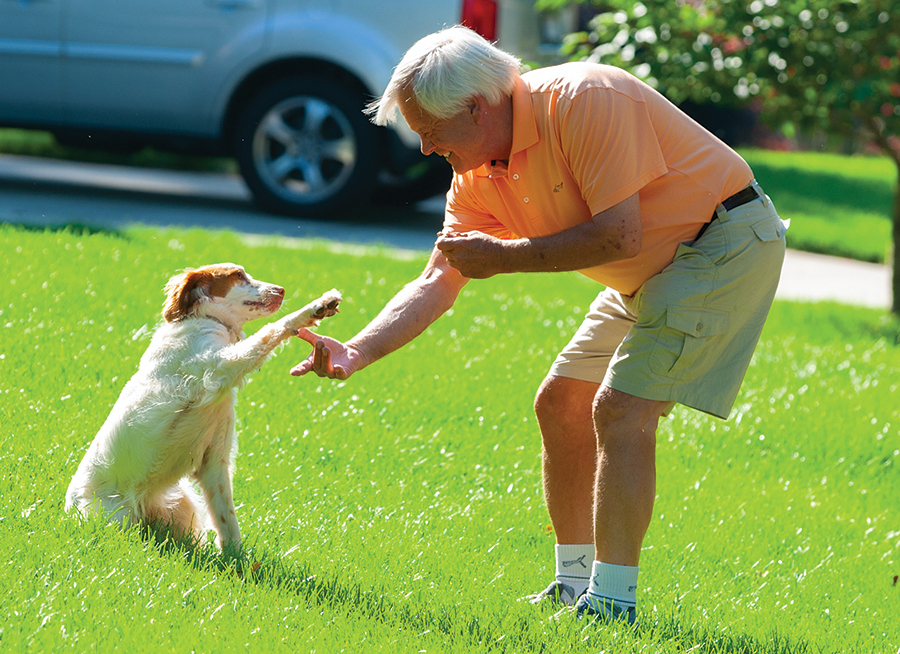 Sandra Kay Reynolds’ three goldens, Gunter, Lucy and Lily “only need to hear me utter [Donaldson’s] name, and they rush to the door,” Reynolds says, adding that they once mistook real ducks paddling in Buffalo creek for his signature birdcall. “He’s like the ice cream man for dogs!” Reynolds observes. And indeed, the three cream-colored beauties fairly leap the fence at the sight of their own personal Good Humor Man. The admiration is mutual. “They’re so sweet and beautifully behaved,” Donaldson says with a wide grin.

On each excursion Donaldson clocks about 2 miles as he dispenses biscuits and affection to his community of canines — from Tim and Cameron Harris’ golden, Macy, to Kelly Rightsell’s dog who eagerly seeks out the biscuits through the slats of a fence. Charles and Kay Ivey’s beagle, Beau, is all wiggles when Donaldson ambles up the driveway. “I call him Elvis,” Donaldson says, as he bends down and commands, “Sing for me, Beau!” On cue, the aging dog launches into a strained but continuous baying. He ain’t nothin’ but a hound dog, after all. 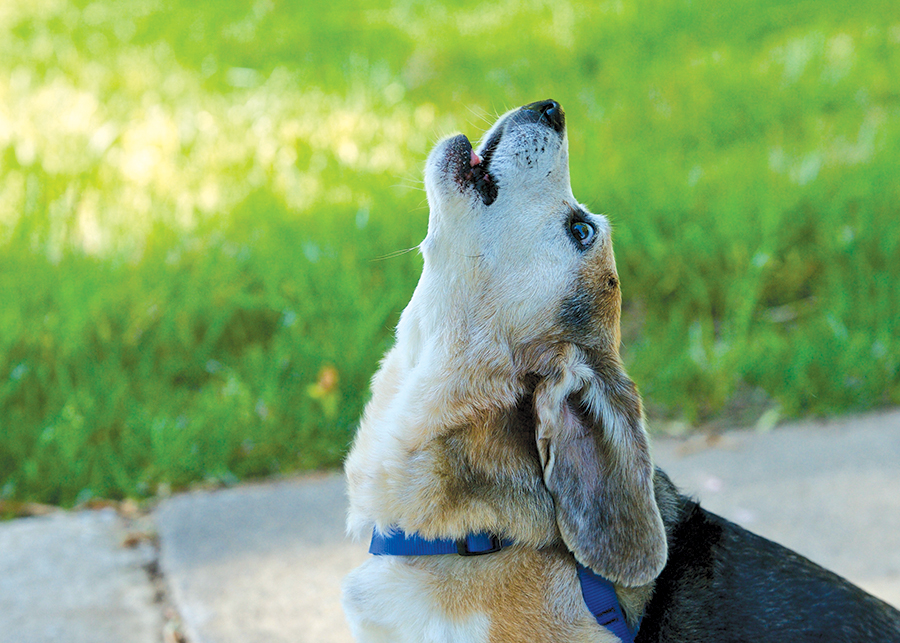 On rainy days Donaldson makes his appointed rounds in his Jeep Cherokee, always stocked with treats; he estimates that he goes through 4 pounds’ worth a week. The dogs, he says, have all come to recognize the sound of the car’s engine. While en route to a recent fishing trip, he passed Reynolds’ house without stopping — much to Gunter, Lucy and Lily’s great disappointment.

All told, Donaldson says he’s fed and befriended some 45 dogs over the years — and a handful of cats, too — marveling at the distinct personalities of each. His routine “encourages me to live a healthy lifestyle,” he affirms. Perhaps more important: “It’s my joy in the morning.” And without a doubt, the dogs’ too.  OH