The Nature of Things

A writer and an artist collide in perfect, cosmic time

“Nothing happens by coincidence.”

Oprah might have said that. You may have read it in a Paulo Coelho novel. Cracked open a fortune cookie and found it there.

In any case, you’ve heard some variation of this quote somewhere.

And then something happens to you — an experience so utterly serendipitous and strange that you wonder if it’s true, and if there isn’t some sort of cosmic force at play; some sleight of hand that gently manipulates collisions in space and time.

This is a story like that. It begins in 2012 when I was 25 years old and had just landed what would be my first cover story for O.Henry.

The magazine had just survived its first year in Greensboro. The cover story was about the Sternberger Artists Center, an Italian palazzo on Summit Avenue that, at the time of its construction circa 1926, was considered to be one of the grandest homes in the city. I interviewed Jeanne Tannenbaum, the great-niece of textile tycoon Sigmund Sternberger, plus a handful of emerging and established artists who rented studios there after the Tannenbaum-Sternberger Foundation donated the house to the United Arts Council of Greensboro in 1972. 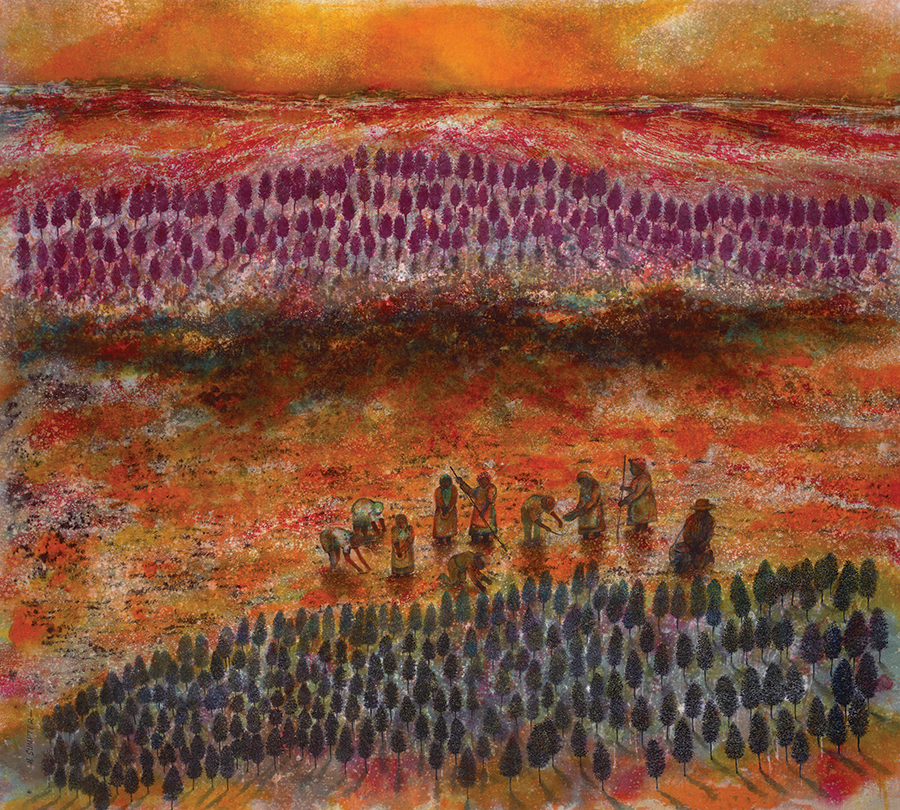 I did not interview batik painter Henry E. Sumpter. I tried. But he did not want to be bothered from his work. The story ran in September.

Some of you may know that I relocated from Greensboro to Wilmington in 2013 to help launch O.Henry’s sister magazine, Salt. And in 2016, I moved to the North Carolina mountains, a soul calling that I still can not put into words.

Now, flash forward to September, 2020 — eight years and a slew of adventures after my cover story appeared in print. I’d just landed back at O.Henry to accept my new role as editor when, no kidding, I got an email from Henry E. Sumpter.

The email wasn’t addressed to me. How could Henry have known it was my second day behind the desk? And yet within this letter to the editor, the artist explained that he “politely rejected” the opportunity to be interviewed “some years ago” for many reasons — namely that the time wasn’t right — and said he was finally ready to open his studio door.

“At the time I was spending up to ten years and over 9,000 hours on certain works and did not want to be disturbed,” he wrote. “I now wish I had taken the offer.”

I cannot express what a delight it was to receive this note from Henry E. Sumpter. It felt like a signal from the universe that we were both in the right place at the right time. Or at the very least, it was a superb coincidence.

And so I clicked on the link to his artwork. I gasped. And a week later, I am back at the Sternberger Artists Center, where Henry has rented space for 38 years.

It’s a rainy Friday morning. Henry is outside feeding two of the four feral cats he has named. They are cream colored. Thomas and Tomás, he tells me. His studio space is in the garage.

Inside, large gray wall panels neatly display nearly 20 framed reproductions of his contemporary works, each of which seems to be a colorful, intimate glimpse into the artist’s dreamscape. 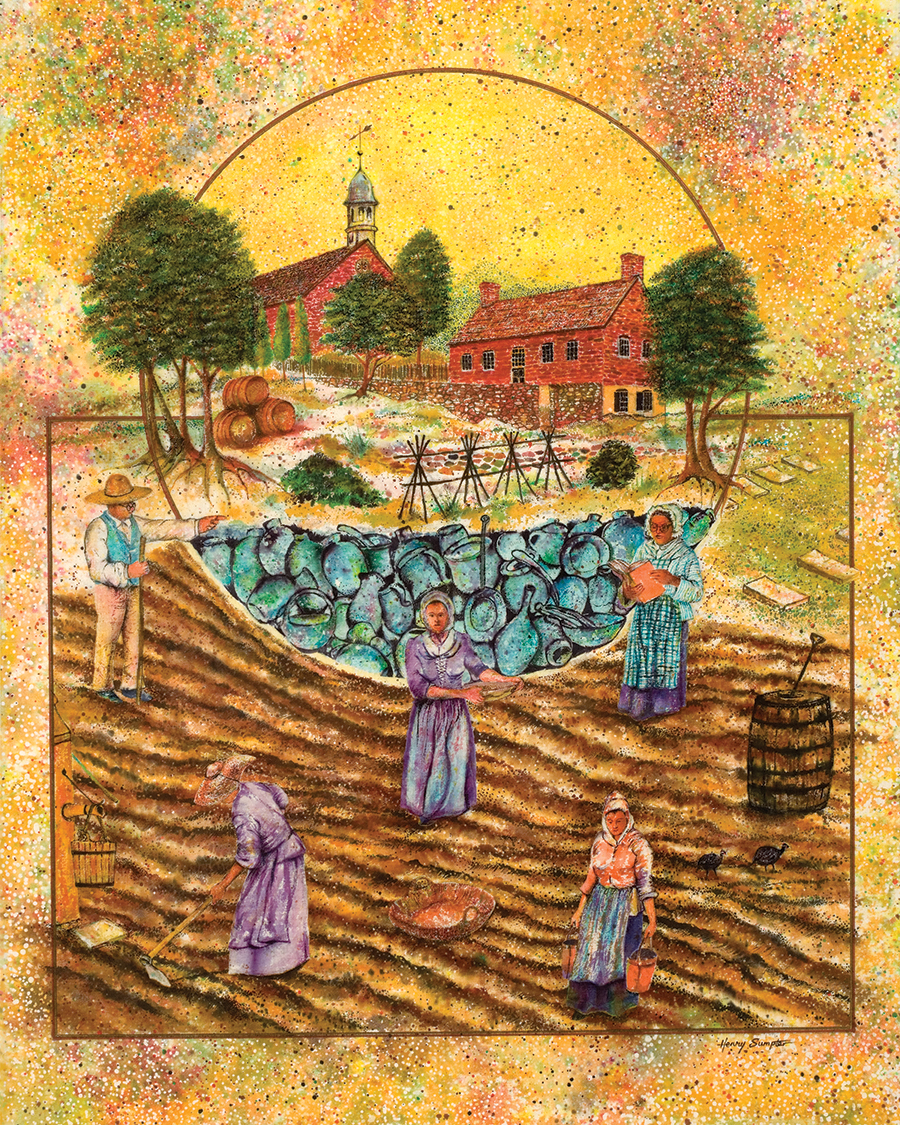 “People describe my work as ‘Otherworldly,’” says Henry, who is standing in front of a reproduction of a piece called Salem Treasures. The five subjects, all inspired by real people the artist met and studied in Old Salem, are working with the land, you might even say communicating with it. Just behind them is a circle — Henry calls it a “spyglass” — that contains a barn, a church, three hay bales, a stone walkway, several trees, a row of pole beans, and what looks like ancient buried treasure in plain sight. All of this, plus the 250,000 tiny multicolored dots in the background, was done on a massive swath of fabric using fiber reactive dyes, a small paintbrush and hot bees wax applied with a tjanting (pronounced “chanting”) tool.

“I don’t know anything about anything,” says the artist, who grew up in Myrtle Beach, SC. “I just let the spirit, or God, what have you, lead me.”

But Henry does know a thing or two about batik, an ancient Indonesian art of wax-resist dyeing that predates written records. He discovered the technique in 1964 when an art professor introduced him to world-renowned batik artist Leo Twiggs (also born in SC). And as Henry said, many of his ideas come from dreams.

Circles are a reoccurring motif in Henry’s work. And moons. His colors are earthy, joyful, peaceful. Most of his scenes are an amalgam of the places he has known — High Rock Lake, for instance, paired with a stand of trees from Greensboro’s Bryan Boulevard. Or the flamingos that used to visit Myrtle Beach. He tells me he has no interest in painting “pretty” people.

“People are energy,” says the artist. His eyes soften, and there is a peacefulness that becomes almost palpable in the room. “I paint the essence.”

Henry is in his mid-70s with a booming voice to match his hefty build. He loves telling stories, often trailing from one to the next before catching himself. He does not move with particular grace or ease, but when he speaks of his artwork, Henry becomes almost childlike, seemingly free from the limitations of body and mind, at least for the present moment.

“This is my most Picassoesque piece,” says Henry. It’s priced at $500,000. Truthfully, if Henry had told me that a collector was on her way to pick it up, I would not have been surprised.

Henry keeps most of his originals upstairs in the home’s former servants’ quarters.

He shows me more from his “Hidden Treasure” series, including a reproduction of Reseeding the Rainforest.

There are over 300 trees in this painting — “trees behind trees,” Henry points out. There are green trees and purple trees, rows of sacred trees with “curative powers.” Henry’s son, Adrian (now 41), was in fifth grade when the seed for this painting took root. Adrian was studying the Amazon rainforest at school.

“People don’t know what treasures the Earth holds,” says Henry, “They forsake them.”

And as he points out the shadows cast in all directions, something clicks. Inside the mind of the artist, there is more than one source of light, more than one way to see.

I see Henry’s son, Adrian, in his artwork. I see the essence of his wife. I see the places he’s been. I also see a vision for the planet that is filled with hope. Cosmic forces at play, gently manipulating collisions in space and time.

“Every day of my life I see the Earth as being something beautiful and new,” says Henry E. Sumpter. “And it’s getting newer.”  OH

You can visit Henry E. Sumpter’s virtual gallery at
visualdesignsstudio.com.

A Case of Holiday KismetNovember 2020