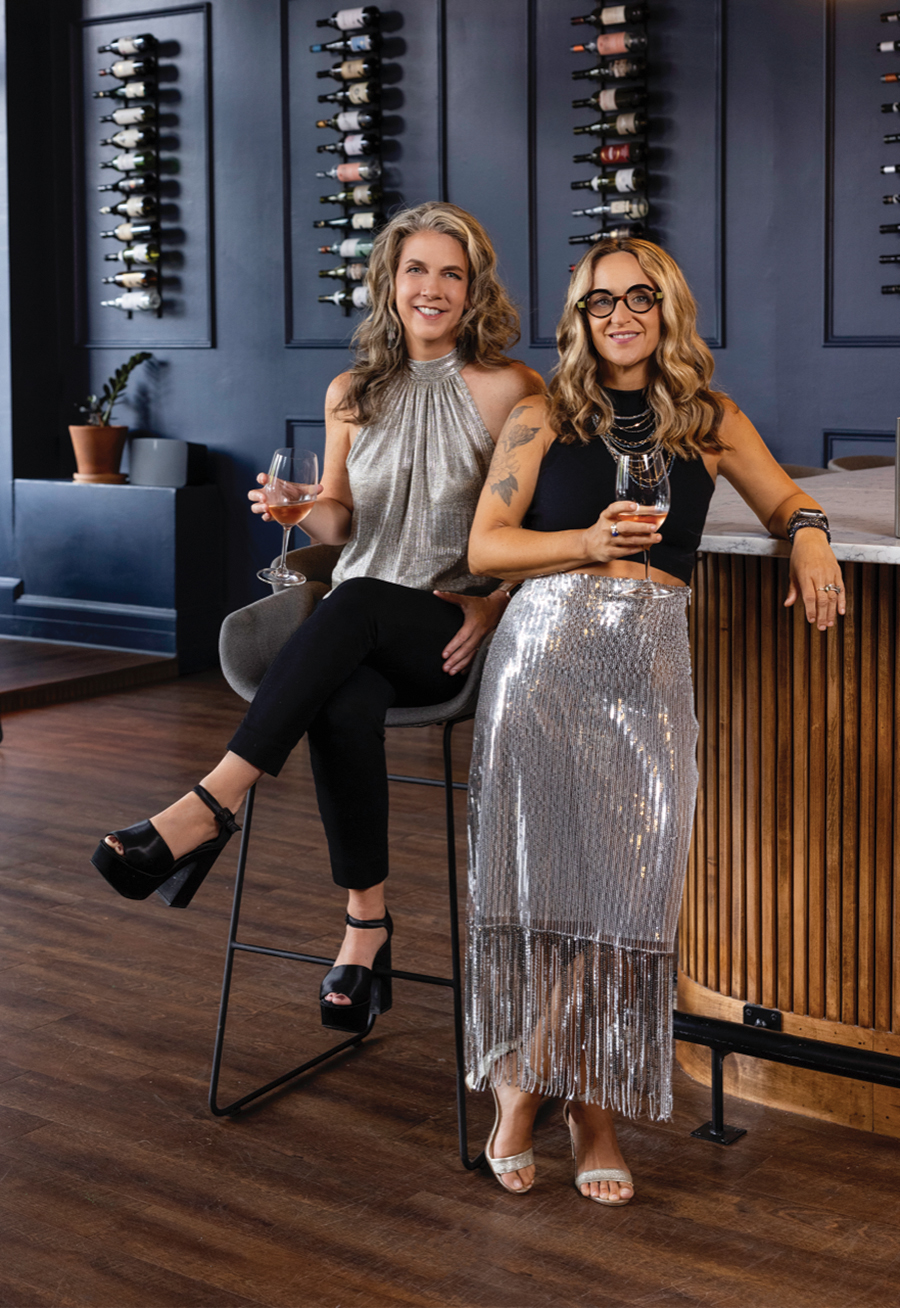 How did two hip interior designers, Gina Hicks and Laura Mensch, approach an historic project reeking of cultural significance — specifically Greensboro’s 1889 Magnolia House Motel — given their trade signature is youthful, contemporary and anything but stodgy?

The short answer is vividly.

The duo, who owns Vivid Interiors, leans into exuberant, artsy, color-saturated decors, which are not exactly standard fare for a venue that’s as much a museum as a dining destination and inn. (One of the pair sports a tattoo.) The Magnolia is an historic hybrid, reopened in late 2021, that was once a landing place for some of the hippest of the hip, who once rocked a packed house, singed a baseball with a thwack, thrilled with a knockout in the ring or seared an audience with discourse. 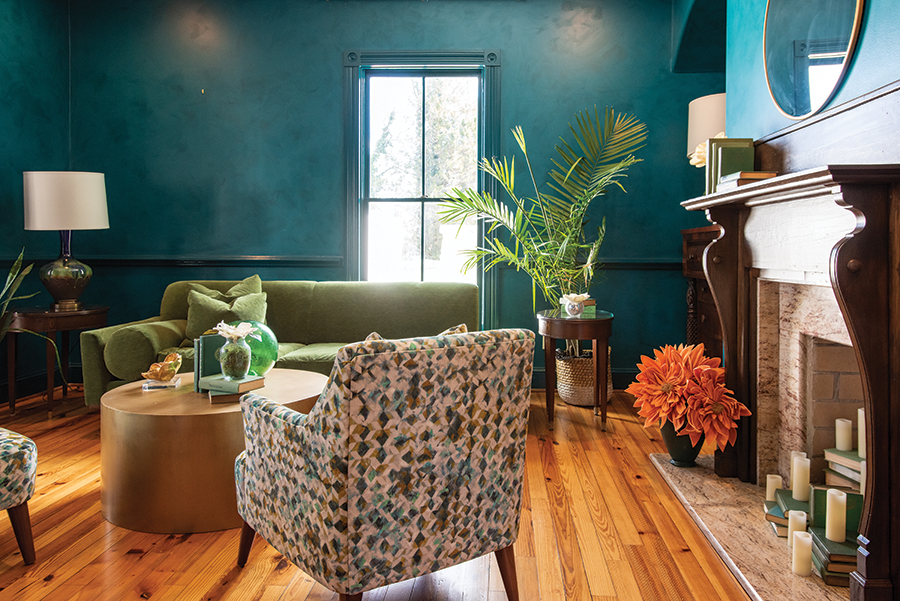 Only a year ago, Hicks and Mensch pored over photographs for clues and provenance, immersed in the likes of Ike and Tina Turner, former Magnolia guests when it was listed in the “Green Book” (more about that later). They reimagined the house’s rooms infused with the blue jazzy vibes of Miles Davis, the pink hotness of Turner or Gladys Knight, the cerebral white heat of James Baldwin or the leathery sports-cool of a Jackie Robinson.

Slowly, the brilliance of legendary figures who stayed there bled into the reimagined interiors, coaxed into being by Hicks and Mensch. Their creative guide was the historic property’s manager, Natalie Miller, who channeled the history with her father, owner Samuel Pass. 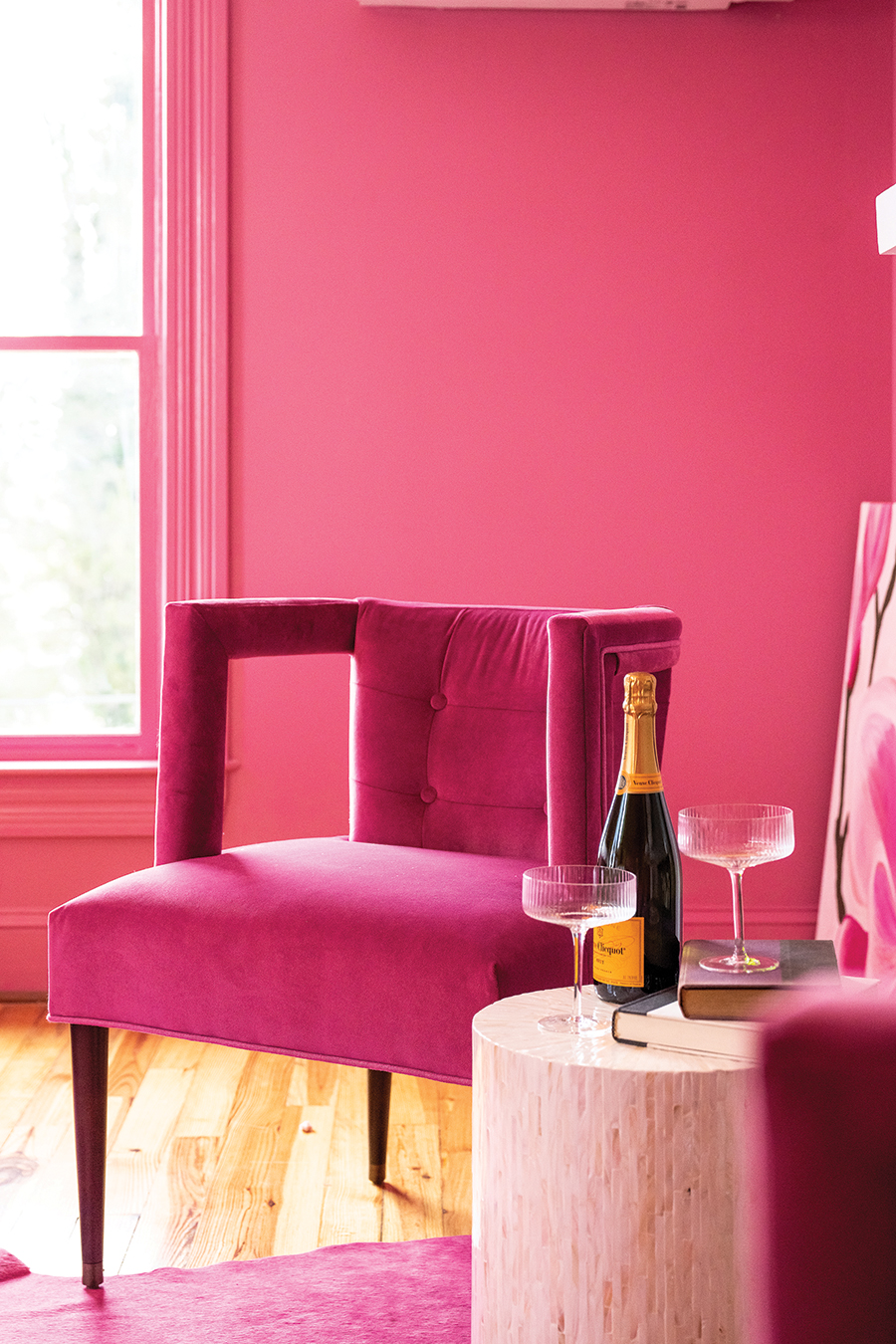 Miller wanted to recapture visual, visceral elements that cultural legends experienced within the Magnolia’s walls, which were now 133 years old.

“We will never look at an historic property the same way,” Mensch admits. “We’ve worked on older properties. But . . .” Nothing they had done, she says, was so absorbing, artistically meaningful, as this.

“Natalie helped us see it.”

“We said we’d love to help a year ago, not knowing how far it would go,” Hicks says. “Initially thought we’d set up a room for some photos. But once you get in it, you have to go through with it.” 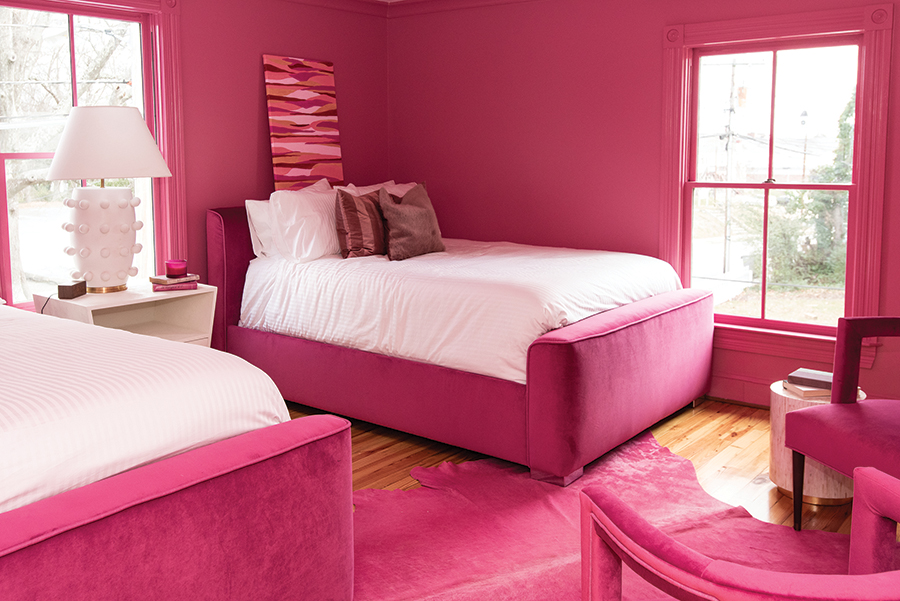 First, some background. The house, which features four en-suite guest rooms, was small but history-packed. Originally the private home of Daniel D. Debutts, it was converted to an inn 60 years later after purchase by Arthur and Louise Gist. The Magnolia was variously called a hotel, motel and inn. It appeared in The Negro Motorist Green Book from 1955 to 1957 and 1959 to 1961. The guide ceased publication in 1966.

In 1995, Pass, who had grown up nearby, bought the house from Grace Gist, widow of state representative Herman Gist. (Keen to own the place he had admired from youth, Pass removed the for-sale sign and placed it in his trunk, according to the Magnolia House website. He later drove straight to Grace Gist to settle on the price.)

Lying within the South Greensboro Historic District, the property, which opened to the public in late December, is listed in the National Register of Historic Places.

As the Magnolia receded with the end of the Jim Crow era, it might have disappeared, as did most Green Book properties. According to Miller in recent interviews, it is among only four or five such N.C. sites that are “structurally replicated and functionally replicated.”

Mike Cowhig, who works with historic preservation for the City of Greensboro, says the city wanted to prevent its disappearance. 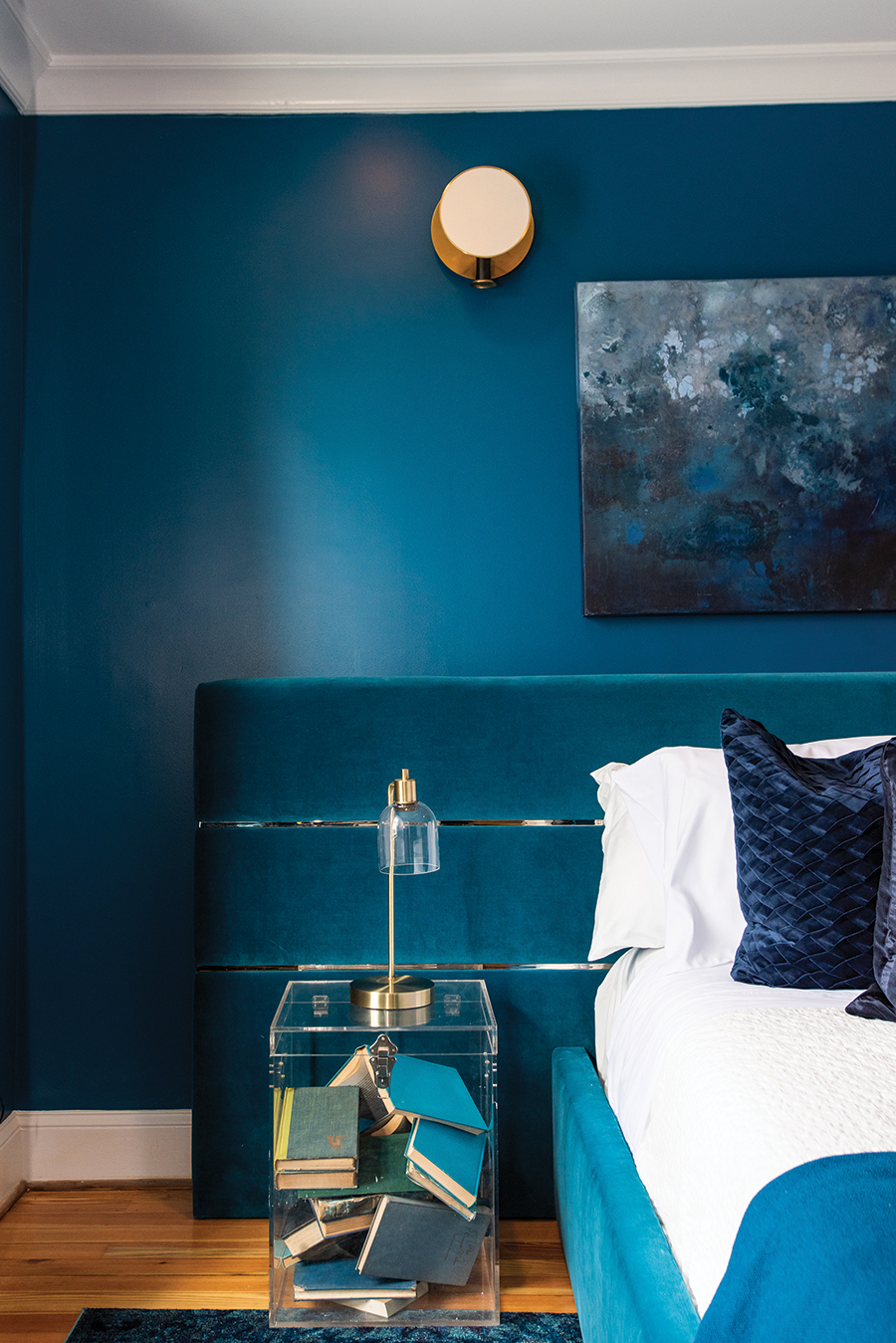 “Around 2000, the city, recognizing the importance of the house, used federal redevelopment funds to award a grant to the owner, Sam Pass, for restoration plans, a business plan, and for a new roof and other stabilization measures to keep the house from deteriorating further,” he recalls. “N.C. A&T also made a grant toward the stabilization of the house around that time.”

Then, Hicks and Mensch met Miller through Launch GSO, a chamber of commerce entrepreneurial program.

Miller had assumed the mantle of managing the property and realizing her father’s vision to approximate its heyday. Miller wanted Vivid to handle the interior decoration. By early 2021, the inn was on the cusp of a new chapter. 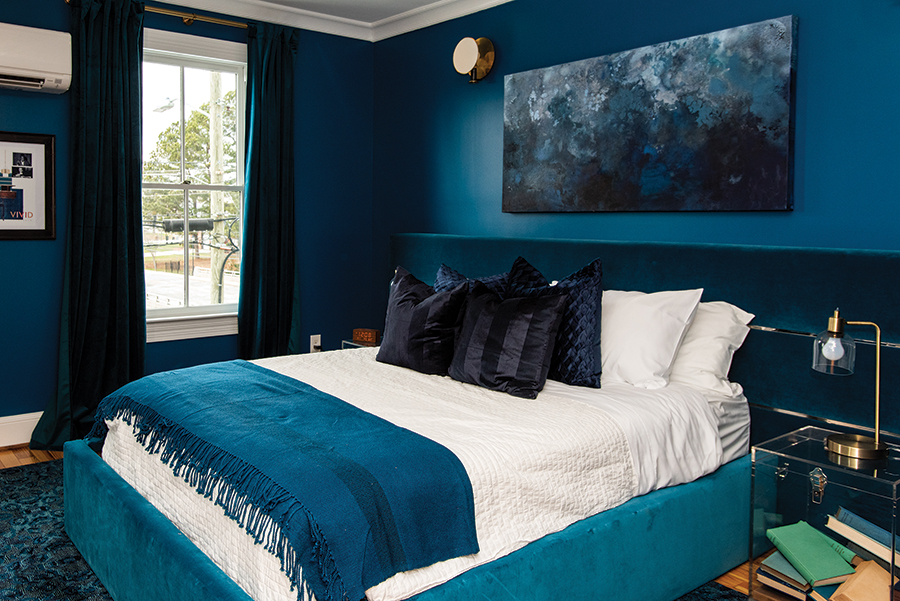 “When we first started working with Natalie, they were offering the shoebox lunches and history tours,” Hicks says. “There were a few other Green Guide places that were doing this.”

With the house 85 percent restored, Miller anticipated the critical finishing touches on the part museum/part inn project, engaging a new generation of guests. As the design duo contemplated the interior design, they needed to channel its creative history while adapting needed creature comforts.

“How do you design a space to invite people and honor the past? Some people are purists and want everything preserved,” Hicks says. Mensch adds, “A house still needs to feel fresh and right for the time.”

They developed a creed: “Honor the present and look to the future.” 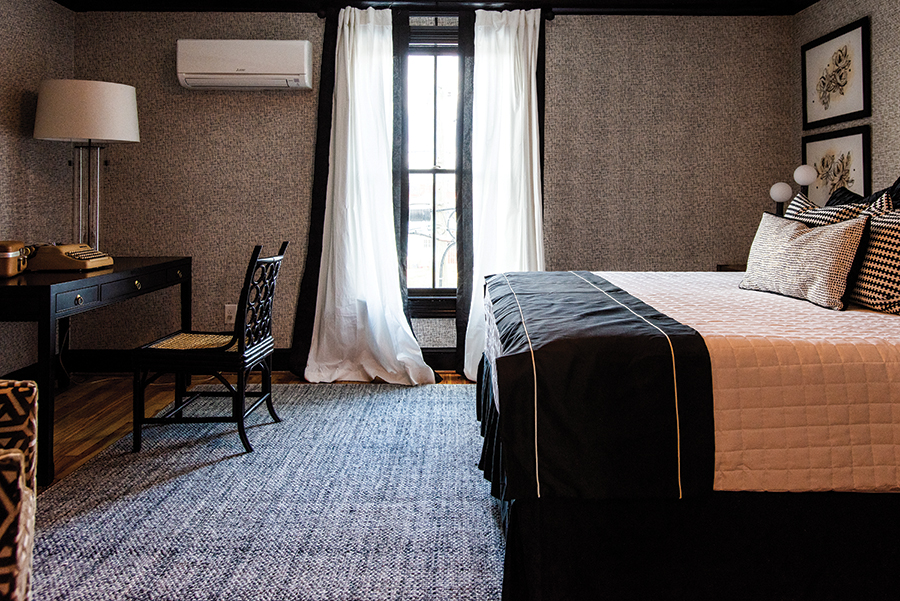 “Then Natalie asked us to watch a movie called Sylvie’s Love, a modern movie based on a 1950s musician, for the colors, scenery,” Hicks says. She captured screen pics and researched the film sets.

But there was a hiccup: no budget.

Interior design wasn’t a line item. The designers agreed to work pro bono but were offered $1,000 from people invested in Launch, “which would cover about 5.4 hours,” Hicks says with a laugh. It was not long before they logged more than 500 hours.

They considered ways to engage others for material products and, with Miller’s help, decided to look for interested sponsors.

“We jumped into this going backwards,” Hicks says. But she also had an ace: a neighbor, Kathy Devereux.

Devereux was a member of the planning group for High Point X Design, a group seeking to keep High Point showrooms open year-round. After HPXD held an event, the Vivid designers were stunned that everyone wanted to help. 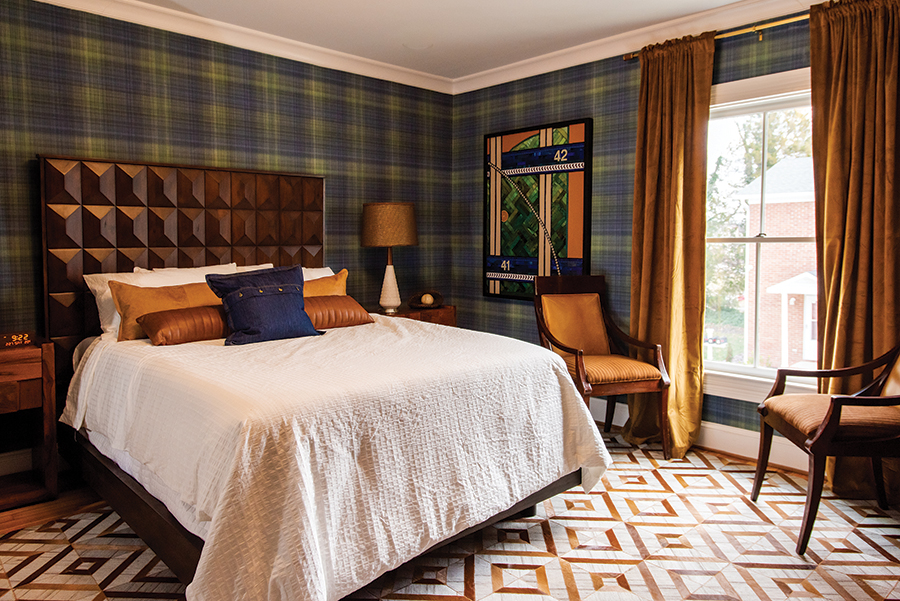 Mensch says they had to figure out how to organize all that largesse: How was it going to fit, to look? “It was a little different from a regular project.”

“We had zero budget, but we started with what we loved,” she adds.

They designed it, and it began to coalesce.

In the meantime, with every visit to the site, the designers, who had worked with few historic properties — the Julian Price house and another on Church Street — knew this was their oldest and most complex.

Miller planned adding a museum annex and more rooms. This was more than an inn. 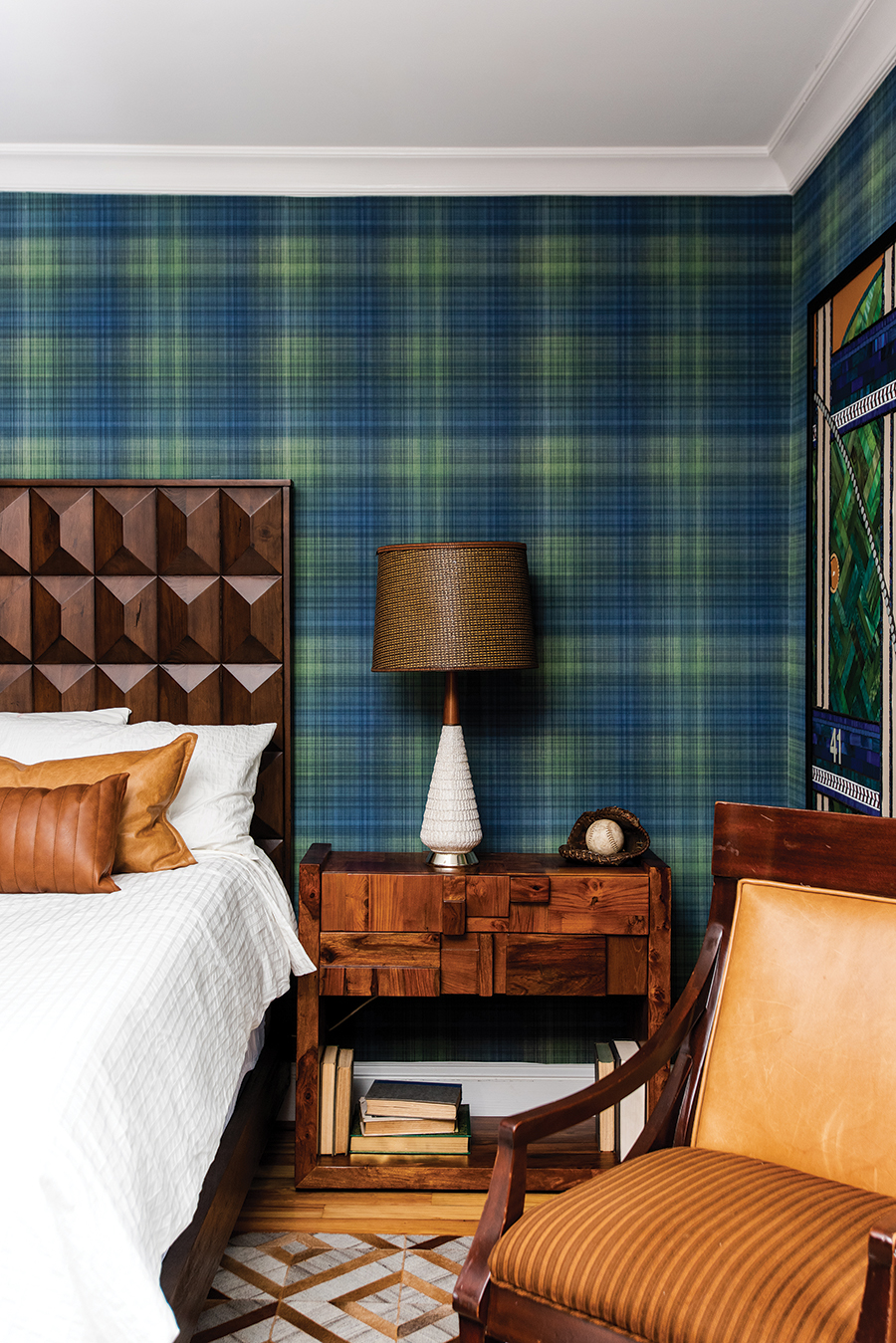 “It means a lot to us. It’s in the community,” Hicks says. “We were glad to be involved with this project. We put our hearts and souls in it. And we will have an eternal connection to it.”

“For the ‘Kind of Blue’ room, it was kind of the culmination of characters. Miles (Davis) and Buddy Gist (son of Arthur Gist) were friends. The design team mined details, seeking to give the rooms names and themes.”  Now the Carlotta room honors “queens of soul,” and the Legends room honors sports guests. The Baldwin room honors African American intellectuals.

Mensch recalls sitting in the living room for the inn’s soft opening. “It felt so good! It was a great mix.”

Hicks agrees: “It came to life.” She mentions “designing for a difference.”

When Gladys Knight performed at the Tanger in November, Miller gave the designers tickets. As they thrilled to Knight’s performance, they felt re-inspired by the project as it was winding down.

“There are so many things I like about so many spaces there,” Hicks reflects. “It feels cohesive, even while trying to honor so many different people. There’s a rhythm in there. A general mood in the house.”

Then she smiles. “Rich! Deep. And smooth!”

As Ellington sang, “It don’t mean a thing if it ain’t got that swing.”  OH