Every now and then, when my spirits need a lift, I’ll buy a can of biscuits at the grocery store because they always bring a smile to my face. Canned biscuits are one of those things that take me back to my childhood.

I grew up in the 1950s in one of Greensboro’s mill villages. Each one had a name, and ours was Revolution. The mill owners supplied their employees with everything they needed — houses, drugstores, schools, a company store, hospitals, churches and a YMCA, where I learned to swim. It wasn’t so much a neighborhood as a community. I remember Sunday dinners of fried chicken or pork roast, sometimes beef roast, and always cake or pies for dessert. If there was anything left over from the Sunday meal we would have it in our lunch bags on Monday at school. (You haven’t lived until you have eaten a meatloaf sandwich on white bread with ketchup!)

School for me was Proximity Junior High, where I attended my first dance in seventh grade. My grandmother took me to Meyer’s department store for a new dress. It was a royal blue taffeta with white lace on the bodice. I had black patent leather shoes and Mary Jane lace socks to wear. I would go on to attend Page High School, graduating in 1963. While there, from tenth through twelfth grades, I was in the same homeroom with a very talented and life-loving guy named Harry Blair.

It was a miracle that my two sisters, brother and I got to school at all each morning, considering that we shared one bathroom with our grandparents in their small mill house. We had moved in with them after my mother died from complications of ovarian cancer at age 35. (My father remarried and moved to Florida with his new wife and family.) Like so many of the other houses in the area, ours had a kitchen, living room, a “car-shed” and clothesline in the backyard. I have hung many a washer load of clothes on that line no matter the temperature. My siblings and I also shared a bedroom with two double beds and only one window. In the summer, we would sleep with our heads at the foot of the beds toward that open window, hoping for a cool breeze to blow in.

Summers are what I remember most from my childhood. We would play in the yard all day — Red Rover, Kick the Can, and at night, Run Fox Run under the streetlights. On the weekends the neighborhood folks would go to the ball field at the bottom of Lineberry Hill and yell for their favorite players or teams. My grandfather loved to work in the garden, so we had a nice patch of vegetables that my grandmother would cook for those Sunday dinners. We never locked our doors except at night . . . or when we left for summer vacation.

Every year, in the third week in July when the mills would close, we would go to Kure Beach. Because we were living in a mill village, it wasn’t unusual to see the same folks from the neighborhood at the beach. Clothes had to be packed for a week for each of us, along with towels, sheets, pots, pans and water. The water at the beach tasted salty to us so we brought our own from home. It was truly a family affair: my grandparents, four aunts, four uncles, four cousins and us. The adults worked until 3 o’clock, and came home to pack the cars before we started on the long, five-hour drive through the countryside down Highway 421. We had to make sure the gas tank was full because there were very few places to stop. We were like a band of gypsies going down the road, each of the five families’ cars packed for a week’s stay. We would stop on the side of the road and have a picnic and go to the woods if nature called. And when we caught the first whiff of salt in the air, our excitement mounted. The ocean would soon be in sight.

Our family was accustomed to renting a big house right on Kure’s beachfront until Hurricane Hazel destroyed it in 1951. Starting the next year, we had to rent three different houses from a Mrs. Fletcher. But before we could move in for the week, all of us — except our grandparents who would join us later — had to cram into one house for the night. We had stopped at the A&P to stock up on groceries and arrived at the house after dark. It had been closed up and had a musty odor. The men went around opening the windows to air the house out. We left the groceries on the kitchen counters to be taken to the other houses on Saturday. Blankets, quilts and pillows were laid out on the living room floor for us kids. The adults were in the bedrooms. Just when everyone had gotten quiet came the crying and swatting of mosquitos. The place was full of the biting flying terrors. The lights came on and the bug spray came out. Someone in the group realized the windows did not have screens. We finally got all the windows closed and the vicious bugs killed so everyone went back to sleep. It had been a long day, what with packing and driving after a day’s work, and once again we settled back down to sleep.

Until we heard the sound of gunshots.

All the men came running out of the bedrooms into the living room, my uncle hollering, “Everyone keep down and don’t turn on the lights! They are shooting through the house!”

The only thing we heard among the gunshots were the moans and groans from the men, as they bumped their knees and toes on the furniture. Finally the shots stopped and someone thought it was safe enough to turn the lights on. All the adults began to look around. The counter and floor were full of biscuits. The “gunshots” were the canned biscuits exploding. No one had thought to put them in the refrigerator, so they got hot and blew up. We all had a good laugh and agreed not to tell the grandparents.

The next day we checked into Mrs. Fletcher’s three houses and finally got started on a full week of fun at the beach. We have continued the family tradition at Kure Beach ever since. My two girls have grown up going there along with their two girls. I still go each year with my two sisters and any of the family who can join us. Mrs. Fletcher’s three houses are long gone, but we’ve discovered a beautiful rental house on the beach with five bedrooms, five bathrooms, and an elevator because the house has three floors and some of us don’t like going up and down the stairs. We talk about the good old days and make new days full of laughter, food, relaxing, surf fishing and just enjoying being together as a family.

And we always remember to put the canned biscuits in the refrigerator. OH

Since she left Revolution mill village, Pamelia Barham has traveled far and wide, but always enjoys returning to the Greensboro area. She currently lives on a farm in Summerfield. 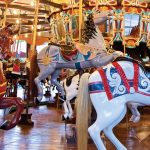 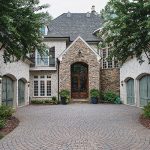