With a languorous stretch and neck roll, Dr. Kimberlee Shaw notes the time. It is 5:30 p.m. at Eagle Family Medicine at Village, a practice located on East Wendover Avenue.

But 2020 has gnawed gaiety down to the bone. 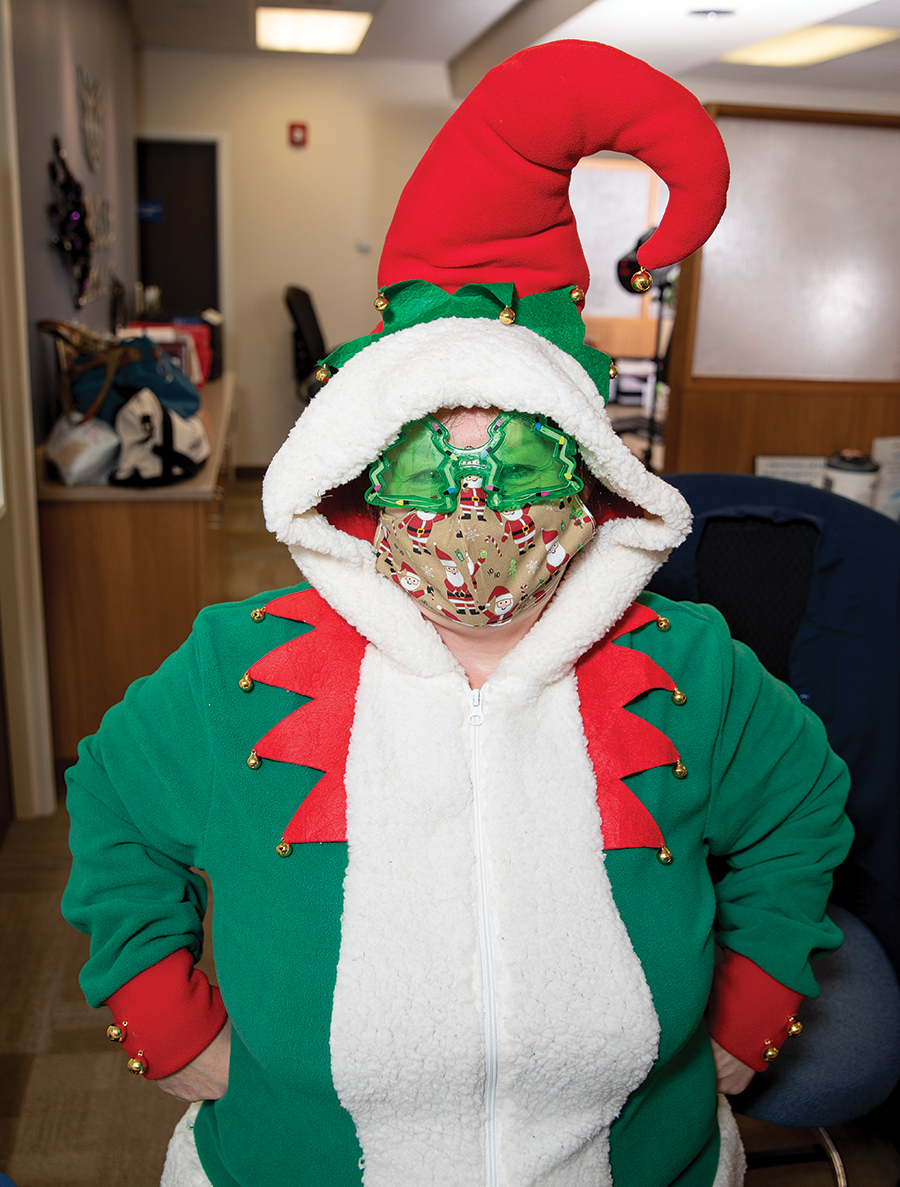 As Shaw stands up, the soft jangling of jingle bells remind her that she does have a remedy for grumpiness and ennui, by golly. Squaring athletic shoulders (Shaw is a former UNC-Ch rowing team member), she shakes off fatigue, which creates a serious glitter storm.

That’s right. Glitter emanates from Shaw herself, and a hair band with a felt Christmas tree bobbles atop her mop of irrepressible light brown curls.

This is no staid doctor in a lab coat. No siree. Shaw has donned a lurid Christmas sweater paired with bedazzled Lurex emerald pants. 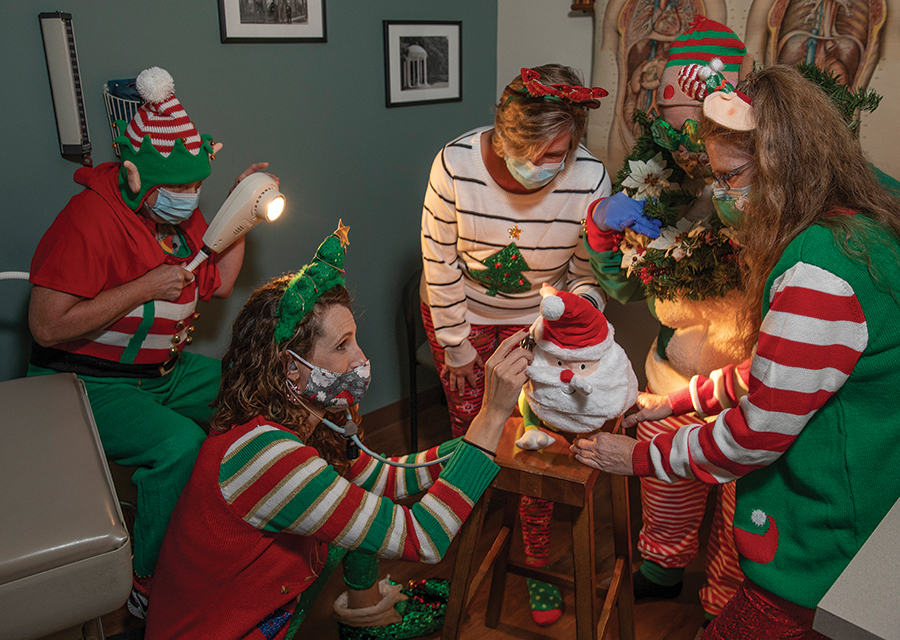 And the matching green shoes?

Shaw doubles down on her dose of glee by putting on shades embellished with reindeer horns, her candy cane hoop earrings dangling wildly.

Her cure for 2020’s malaise has been patient-tested; the known side effects are giggling and irrepressible mirth. And the application of her novel armamentarium vanquishes tension and pain in statistically significant ways.

From a room down the hall, she retrieves a bin containing some of her after-Christmas haul — the “schlocky stuff” marked at 70 percent off — leaving a glittering debris field in her wake, sequins and shimmering, colorful bits sparkling in the industrial fluorescent light.

It’s the annual reappearance of dress-up-like-elves time at the physicians’ offices, in preparation for the holiday season. Shaw has worked here for a decade.

A few of Shaw’s staff groan. One moans from her office down the hall, “I forgot!”

Amy, a petite 20-year veteran of nursing, plays the office curmudgeon: “I don’t want to dress up!”

Shaw doesn’t argue or coax. She simply begins a jig in the hallway, heels kicking. Resistance is futile. 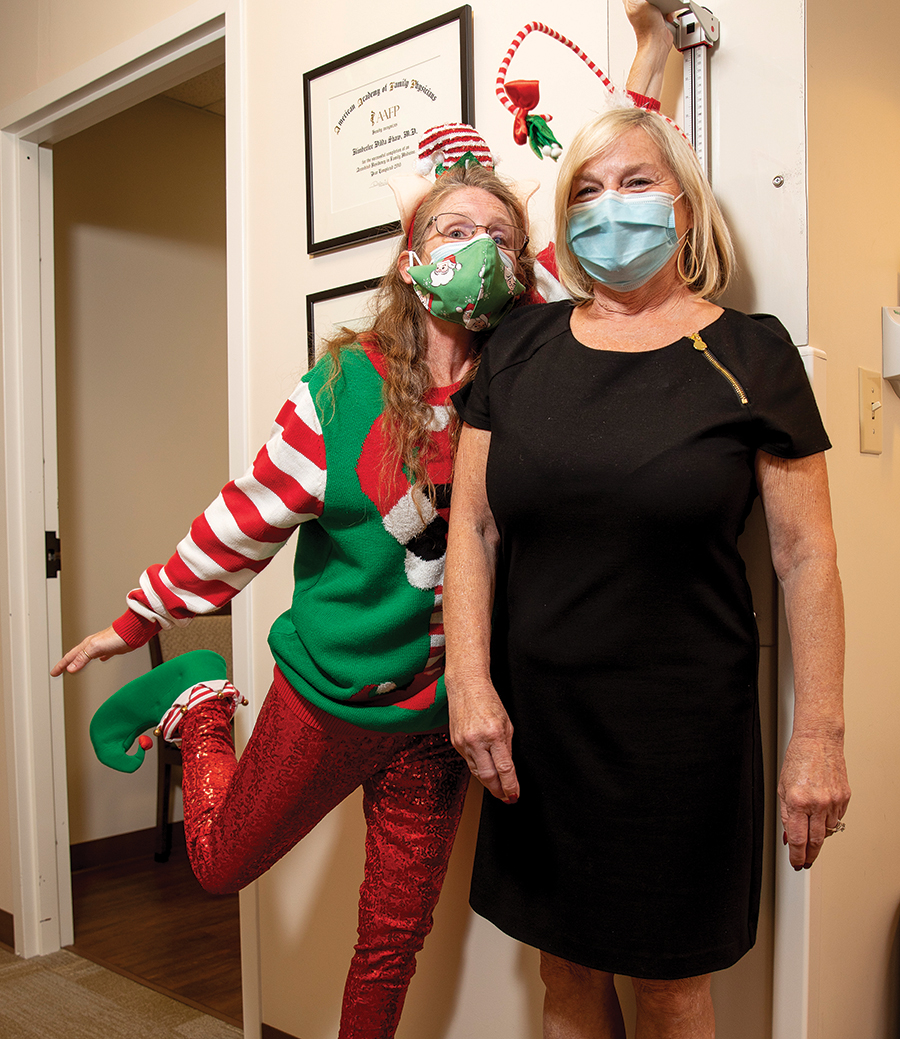 “I love Christmas, I just don’t want to dress up,” says Amy. “But I love Dr. Shaw and would do anything for her.”

Within minutes, Amy emerges from an office, transformed into a grumpy elf, now galumphing in oversized shoes and kicking up her own bedazzled heels.

Before long, Dr. Dean Mitchell sticks his head out into the hallway. “Hey, what is all the fun about?”

He immediately joins in the hijinks, pretending to be a patient playfully checking out. Mugging for a camera, Mitchell offers Dum Dum lollipops in payment.

Privately, Mitchell correctly diagnoses what was happening: A contagion of laughter. Patient zero for this contagion was Shaw, who was happier than anyone, cavorting, twirling. Effervescent.

Patient reactions when a costumed Shaw springs into an examining room as they wait in a hospital gown?

Yet Shaw does take medicine seriously, and recalls having one or two instances when a patient was in “for something serious.”

She navigates those instances with care. Once, dressed as Cat in the Hat for Halloween — wearing giant white hands and that crazy hat — she realized she had difficult news to convey.

“We were having a good time, but then we had to have this big conversation,” recalls Shaw. “I realized I was sitting there with this big hat on and I wanted them to know I took it seriously.”

She removed the comical hat and did away with the costume.

“I said, ‘Excuse me. Let me take this off.’ I don’t want people leaving thinking I don’t take them seriously.”

“You’d be surprised how much people don’t complain [when I’m in costume]. I don’t know if they forget themselves?”

Yet Shaw, the perennial optimist, has more than a passing acquaintance with sorrow. One sorrow was pivotal.

There were no other physicians in her family, but since babyhood Shaw wanted to be a doctor. Her parents, Jerry and Carolyn Dilda, fully supported her.

Her father pushed Shaw to apply for the N.C. Board of Governor’s scholarship. It was merit-based but there was a financial component for applicants; she worried he would procrastinate on the paperwork.

Shaw was working in Boston when she was called home; her father was at the hospital following a catastrophic stroke. She reached the Charlotte hospital by evening.

“They kept him alive long enough for us to all get there.”

She added, “Daddy didn’t believe in doctors — unless you are bleeding and cannot stop the bleeding. He had keeled over at his desk, age 57, at home.”

The very next day, Shaw received the letter announcing her full ride to medical school.

Losing her father as her own life’s dreams were opening might have derailed her. But instead, her first year of medical school, amidst gutting loss, lent a fierce focus for the young physician.

“It was a blessing. It gave me something to do . . . to focus on something other than that grief.”

She learned her father, an engineer with a small business, had uncontrolled sleep apnea. He was taking aspirin all the time. He had uncontrolled high blood pressure. She would apply these insights later.

But Shaw was riveted by the memory of an awkward young physician who met with her family on the night of her father’s death.

“He might have been a first-year resident.” She noted how he “was clearly out of his element.”

Adding to the direness of the situation was the resident’s discomfort and the sterility of the setting.

“Every part of it was not good. And you can make that better,” she has discovered. “But at the funeral home, the director was so great. He reassured us. I almost, at that point, thought, ‘Maybe I should be a funeral director.’”

Shaw was struck by the experience of seeing death met with such grace and understanding, profoundly different than the resident had handled it.

She retained the lesson.

This became the central theme she returns to: Sorrow makes way for happiness. Wounds heal.

There was a telling coincidence while she was at Carolina studying medicine. The Robin Williams film, Patch Adams, was being filmed on the campus. Shaw watched Williams wheeling his bike “down Franklin Street, in character.”

It planted a seed.

Dr. Patch Adams, on whom the film is based, championed the idea of laughter therapy, and founded the much-loved Gesundheit! Institute.

“There is a reason for the phrase comic relief,” wrote Adams in his book, House Calls. “When suffering is great, there is a call for relief. Whatever we are nervous about or emotional over is where jokes come from.”

He cited Voltaire: “The purpose of the doctor is to entertain the patient while disease takes its course.”

Shaw’s parents, her biggest influences, were original thinkers, too. Her mother enjoyed historic reenactments, returning to school to learn historically accurate cooking. She raised chickens “and can grow anything.”

Whereas Shaw’s mother “was from a prim and proper Southern background, Daddy was the force.”

She learned joy by virtue of her parents’ example: “Christmas is not what you get. It’s what you give; the joy of the holidays.”

Their Christmases were simple: “My mother chose, intentionally, to keep it simple and I see that this led to thinking buying gifts was not all it’s cracked up to be.”

“My kids adore her,” Shaw says. “My mother showed up four years ago wearing a witch hat and these witch shoes for her regular annual wellness exam with Dr. Elaine Griffin! Stone faced normal! Just checked in. Sat down. She just likes to do that one little thing that is different.”

And so does her daughter:

“Just do something — be human! Just make people laugh.  There’s no reason not to! I do this because it makes me happy,” she says.

Patch Adams once said, “the reason adults should look as though they are having fun is to give kids a reason to want to grow up.”

There remain ways we can alleviate the pain of a pandemic.

“Many, little things we can do,” Shaw insists.

“Now I’m looking for funny masks,” she says, her eyes twinkling. “Why not? Why not make it funny?”  OH

Cynthia Adams is a contributing editor of O.Henry whose dog is named for Dr. Patch Adams, whom she once met. If she’s not Dr. Shaw’s favorite patient, please don’t tell her.

The Creators of NCDecember 2020
X