They look like they’re fixing to talk, the 24 people whose spirits were gently snared and then brushed onto birch panels that will hang in the Central Gallery of Greensboro’s Revolution Mill until October 1.

Portrait artist Suellen McCrary is responsible for the catch-and-release operation, a project called The Faces of Revolution.

Everyone she painted is connected, one way or another, to Revolution Mill, which wove downy flannel for Cone Mills Corporation from 1898 to 1982. The reclaimed complex, which blankets the hill where North Buffalo Creek slides under Yanceyville Street, now functions as a hip hub of live-work-play.

Funded by a grant from the property’s current owner, Self-Help Ventures Fund of Durham, McCrary mostly painted people who worked in the factory, folks who grew up in the mill village and their descendants. A few of her subjects currently labor — in light-flooded, ergonomically correct offices — in the latest incarnation of the brick, steel and maple behemoth.

McCrary herself leased a space there until last summer, when she moved back into her High Point home studio.

In mid-October, the oil portraits will move into the main building’s Textile Hall of Fame, where they will appear with biographical sketches.

McCrary, a Greensboro native and Appalachian grad who worked as a graphic artist before settling into portraiture, agreed to sit for a Q&A in the spirit of the word “portrait,” which is derived from the Latin verb “portrahere,” meaning to reveal or expose. 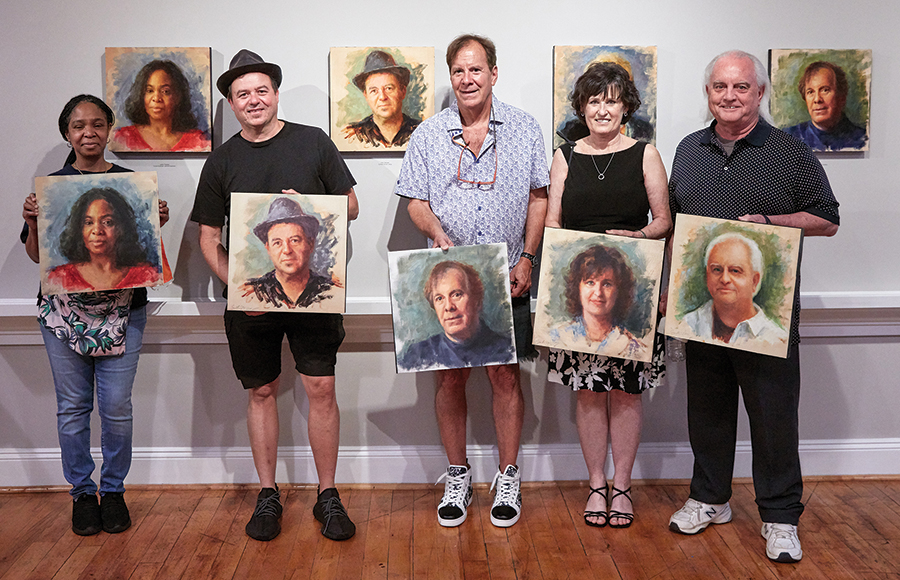 Was there anything that struck you in the stories of the people you painted?

How many hours did you spend on each portrait?

You know everybody asks me that. It varies. Some just flowed and some took a lot longer. Many, many hours, we’ll just put it that way.

Aside from the commercial viability, why do you paint portraits, as opposed to, say, landscapes or still lifes?

Gosh, I don’t know if I can describe why. I’ve just always been drawn to drawing people. It’s just what interests me. I love landscapes. I appreciate other people’s landscapes, and I keep thinking I’ll try my hand at it, but I keep painting people.

Do you remember the first portrait you painted?

Probably my kids — and those weren’t very good.

Did they tell you that?
No. I look back on them, and I can tell that they weren’t very good. It’s like anything else, practice makes better, not perfect.

What are you after when you’re painting someone’s portrait?

Their likeness, obviously. I want to put them in their best light because that’s how I’d want someone to do me. I always find something that I love about every person that I’m painting. I try to play that up. It could be a look in their eye, a slight expression of their mouth.

Would you glean that from a conversation?

John Singer Sargent is the first one that comes to mind. With just a few brushstrokes, he’s able to capture the essence of a person. You know he labored, but he makes it look easy. If I’m in a museum, and they have a Sargent, I’m bee-lining.

Have you ever done a self-portrait?

Yeah. I was in college. It was OK. The guy I was dating at the time said he didn’t think it looked like me.

What did he mean by that?

I’m hoping he meant I didn’t do myself justice!  OH