Live from The Burrow

American roots music is rife with compelling and talented duos — think Dolly Parton and Porter Wagoner, June Carter and Johnny Cash — but few have been as charmed or charming as Austin and Sarah McCombie of the North Carolina band Chatham Rabbits. The two first met in 2014 at a concert they attended separately, and within a few years they were rattling around the country together in a 1986 Winnebago, headlining concerts of their own. It’s an old story based on an even older dream: start a band with your best friend, sell everything you own, make a living with your music. But for Chatham Rabbits, that dream came true, and the most genuine thing about that dream is the music itself.

In marriage and in music, Austin and Sarah blend their individual histories into a shared musical experience. Years ago, Sarah first took the stage as a member of the South Carolina Broadcasters, a musical trio that harkened back to the bygone days of the Grand Ole Opry and AM radio country classics. Meanwhile, Austin played keyboards and guitar for an electro-pop band called DASH. Given their backgrounds, how would Chatham Rabbits describe their musical marriage?

“And we’re certainly not the hippest,” Sarah adds. “But we’ve been able to belong nowhere and everywhere at the same time,” which is to say that Chatham Rabbits have always been able to create a musical home, both for themselves and for their fans. 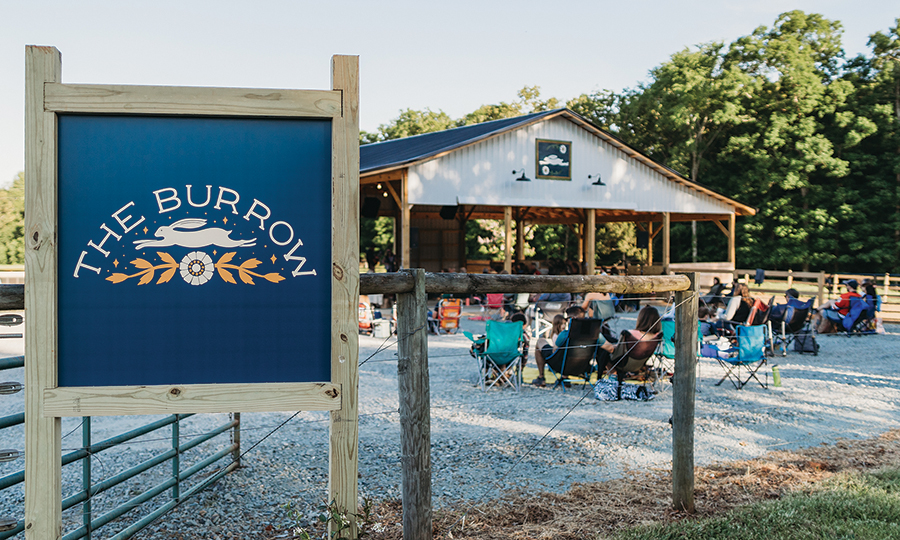 The duo’s first album, All I Want From You (2018), was written in Bynum, where Austin and Sarah could sit on the porch of their old mill house and survey the entire village of tightly packed homes, a vantage point that revealed their own ties to the close-knit community. The music — with Sarah on banjo, Austin on guitar, and the two splitting lead vocals and sharing harmonies — reaches out to the listener while reaching back in time in search of stories. Their latest album, last year’s The Yoke is Easy, the Burden is Full, is carried by the same gorgeous melodies, harmonies and delicate instrumentation, but it possesses a more introspective quality, which makes sense considering that the album was written when the couple moved to their 11-acre farm in Siler City. In these songs, the Rabbits use contemplation as incantation, inviting the listener to sit quietly with Austin and Sarah as they reflect on their shared life and their families’ histories. If their debut album was a means of reaching out to connect with a larger community, then their more recent album is a guided, dreamy meditation on turning inward. Whether they’re reaching out or looking in, Chatham Rabbits have always invited listeners to join them. 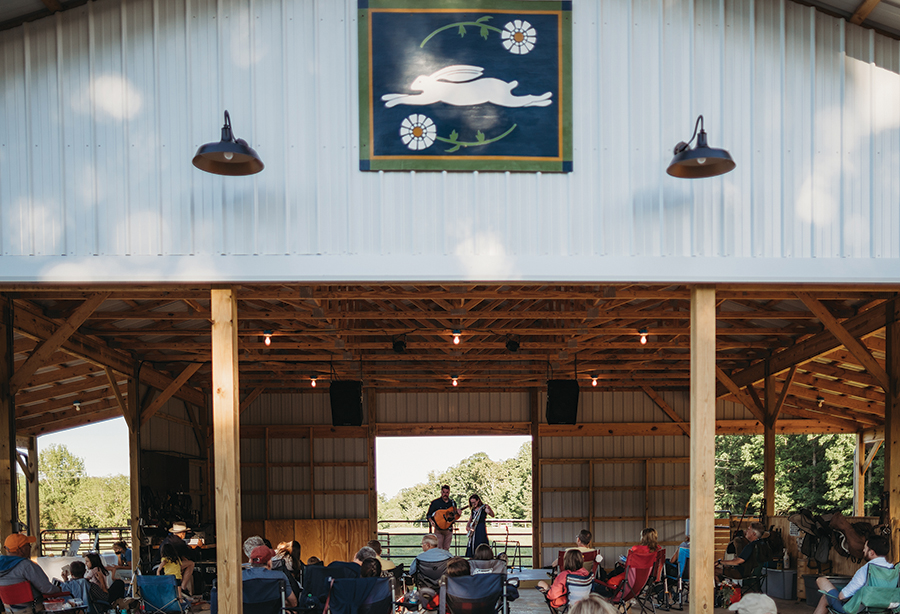 They’ve recently invited listeners to join them on their farm, too, where a new barn has been repurposed to host outdoor concerts that allow for the requisite 6 feet of social distance between pods of attendees. On a Saturday in early May, Austin and Sarah are both smiling behind masks as they move through the preconcert crowd, catching up with old friends and meeting new fans for the first time. The two are refreshingly approachable, remembering people’s names and asking after their children and families. He’s wearing a navy-blue button down and khaki pants; she’s in a navy-blue dress that once belonged to her great aunt. Although there are speakers hanging from the rafters and a lighting system illuminates the instruments and microphone on stage, there are plenty of reminders that this is still a working farm. Saddles and bridles hang on the wall. Chickens meander through the crowd. In the nearby pasture, a black cow named Petunia rubs her back against an old tree.

“The barn was halfway built when the pandemic hit and all of our shows were being cancelled,” Austin says. “At the time, the barn floors were going to be dirt, and the builders were about to enclose the walls. We asked about pouring a concrete floor, and we learned that it would cost the same amount to pour the floor as it did to put up the walls. We chose the floor.” 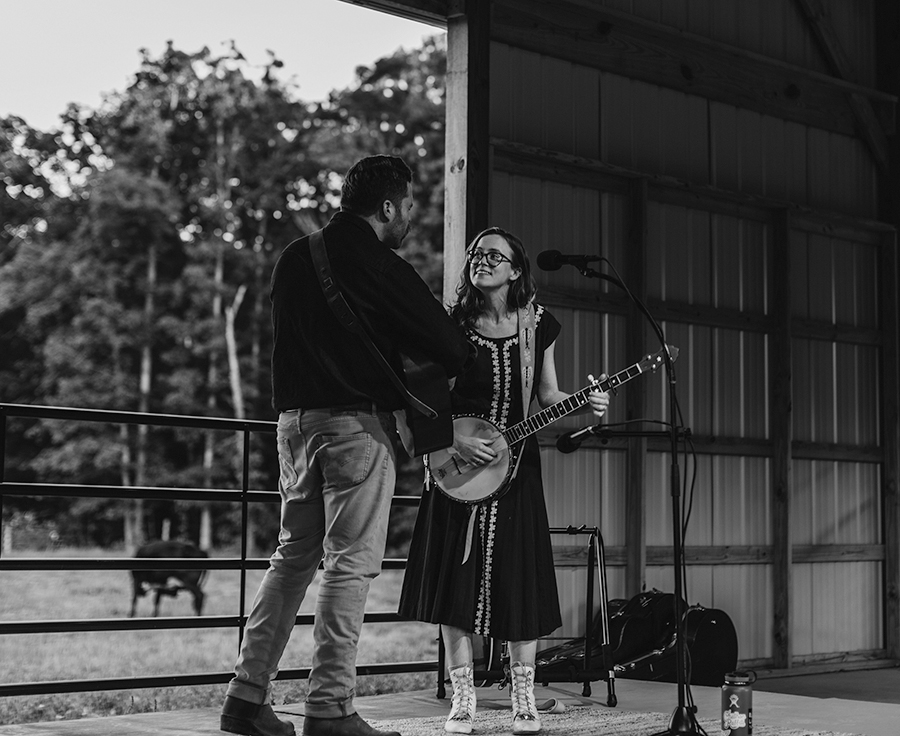 That kind of quick decision making has served the band well during the pandemic, which has rocked the music industry, but Chatham Rabbits have found ways to adapt.

“When the pandemic hit, we were about to release a new album, and we spent a week worrying about the world and feeling sorry for ourselves,” Sarah says. “Then we got busy figuring out how to make it work.”

The two used funds from their Patreon crowdfunding platform to buy a Sprinter van and a flatbed trailer. Off they went, playing outdoor shows in neighborhoods across the state and into Virginia and South Carolina in support of the new album that was supposed to have been celebrated in concert halls across the country. “We’ve probably played one hundred shows from the back of that trailer,” Sarah says.

Once the barn was finished and the state’s health restrictions allowed it, they decided to test the waters by holding six live concerts throughout the summer in the space they’ve named The Burrow. The tickets sold out in less than three days. As the state’s coronavirus numbers improved, Chatham Rabbits released more tickets, which sold out in mere minutes.

The resilience and flexibility required by the past year has influenced the song writing for their new album, to be released in coming months. “Many of the songs are reflections of us being at home together for an entire year,” she says. “It’s about our life on the farm, shifting friendships, and the way we had to come to terms with our foundations being rocked.” 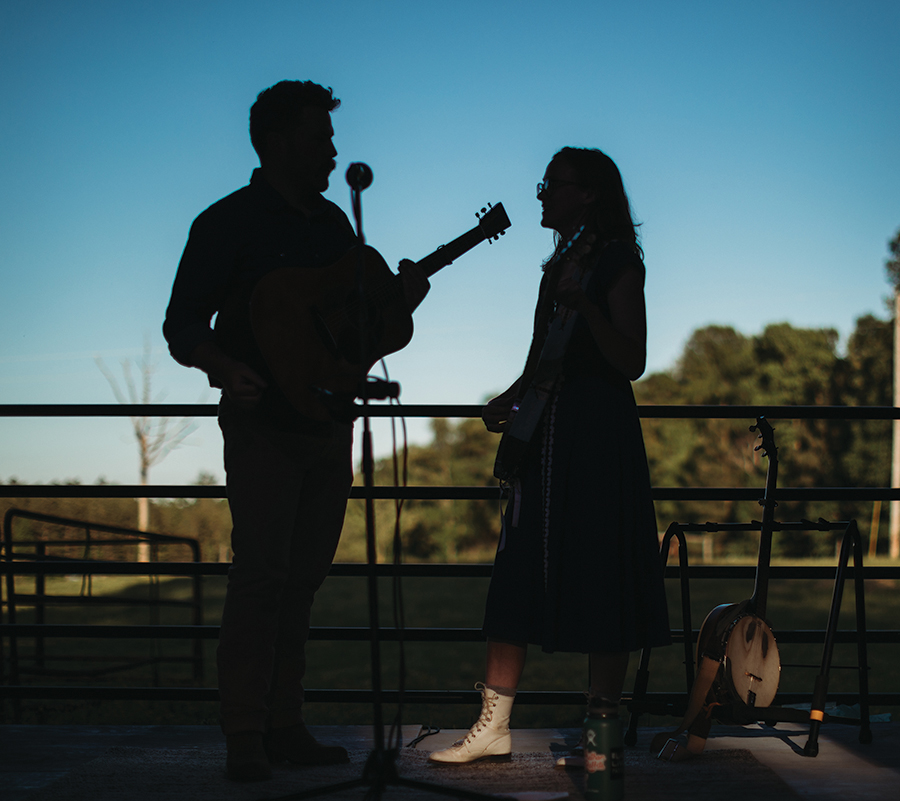 As Austin and Sarah take the stage, the air is charged with energy and a giddy sense that something is returning to the world, whether it be live music or summertime or the feel of a cold beverage in your hand and the weight of a sleepy child on your lap.

After welcoming the crowd to the inaugural show at The Burrow, Austin and Sarah open with a song from their first album titled “Come Home.” Attendees take off their masks, settle into their beach chairs, and — for the rest of the evening — do just that. OH

Wiley Cash is the writer-in-residence at the University of North Carolina-Asheville. His new novel, When Ghosts Come Home, will be released this year.