Every Moment is a Window

Through his art, Richard Wilson bridges the gap between then and now

Spend some time with visual artist Richard Wilson’s work, and you’ll quickly grasp the role historical connection plays in it.

Take his Shadow Series, for example. In each painting, an African American boy or girl stands in the foreground, the background comprised of images of an African American trailblazer. In one piece, a girl in a leather bomber jacket blocks the sun from her eyes and stares toward the horizon, as if searching for a sign of what’s to come; behind her is an assemblage of newspaper stories and photographs of Bessie Coleman, the first African American woman to hold a pilot’s license. Another shows a young boy in oversized boxing gloves gazing up at a speed bag that’s just out of reach; behind him, a newspaper announces that Jack Johnson has defeated James Jeffries to become the 1910 heavyweight champion of the world, the first African American to win the title. Other luminaries such as Arthur Ashe, Serena Williams, Michael Jordan and Barack Obama are featured in the series, each a guiding light for the young dreamer standing “in the shadow.” To the viewer, it’s clear that ancestors and aspiration are powerfully present in Wilson’s artwork. 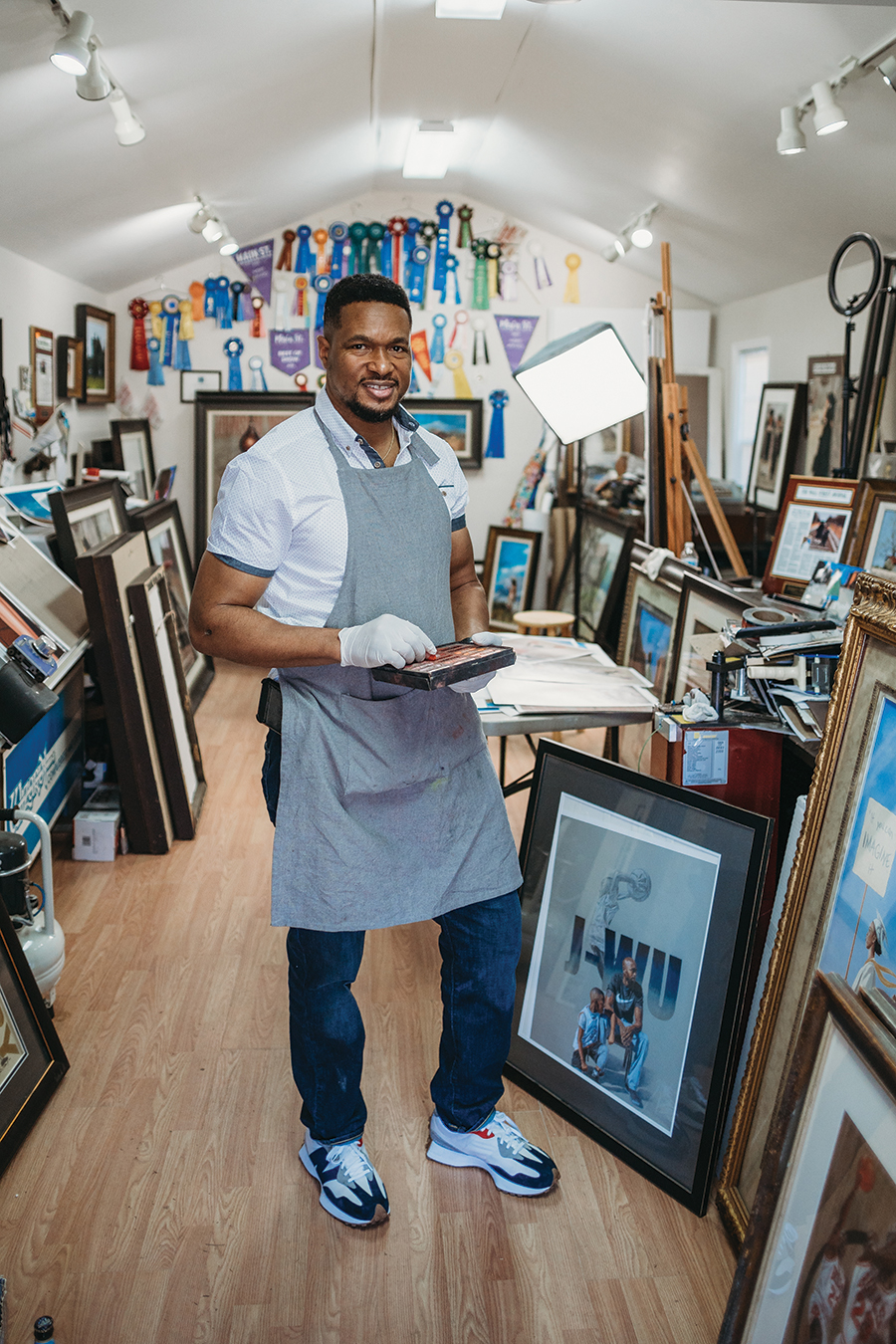 And if you spend any time with the artist himself, you’ll understand that ancestors and aspiration are powerfully present in his own life.

The oldest of three boys, Wilson was born in Robersonville (Martin County) and moved with his family to Conetoe (pronounced Kuh-nee-tuh), another rural town in Eastern North Carolina, when he was 8. He grew up surrounded by family — siblings, cousins, aunts and uncles. They were close-knit.

Today, Wilson is standing in the middle of his art studio in Greenville, N.C., where he and his wife have lived for just over 20 years. The walls around him are festooned with his original works and ribbons from national art shows; the floor cluttered with framed prints and works-in-progress. Wilson, a tall man who looks like a linebacker yet comports himself like a poet, admits that he has nearly outgrown the space that he built himself. On the wall opposite him is a framed original painting titled A Window Into the Past, in which an older African American man with a cane is picking his way across a field to a weathered two-story farmhouse. The man in the painting is Wilson’s uncle. The home, which has since been demolished, once belonged to
Wilson’s paternal grandmother, Mary Battle. 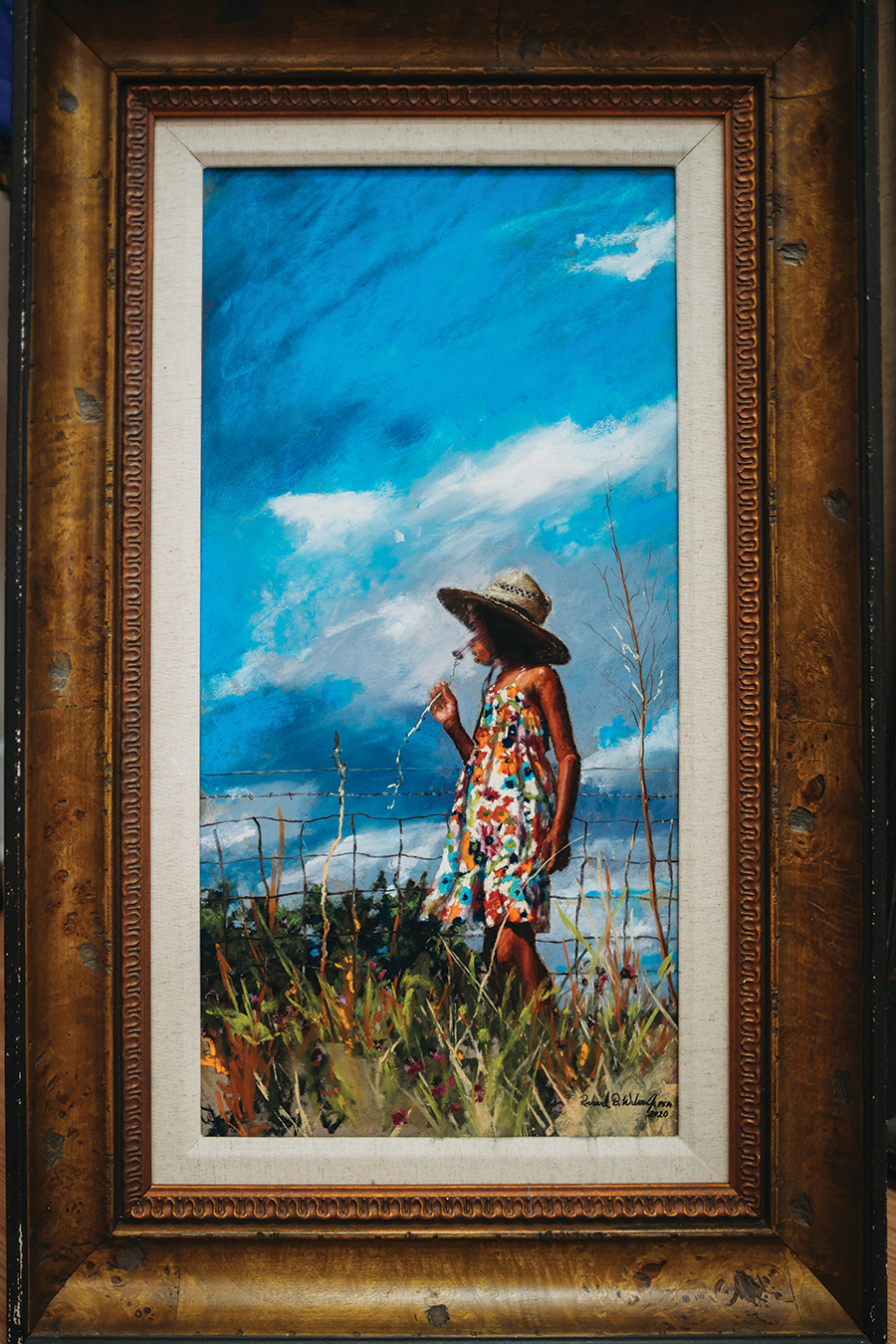 “Every weekend we’d go to my grandmother’s house,” Wilson says, gesturing toward the painting. “All the children and grandchildren. That was the highlight of my week. My uncle, who was a sharecropper, would cook on the grill. We’d all play kickball and softball. I can still smell the rain on the dirt, the trees — pears and pecans. It was a beautiful life.” He sighs and his broad shoulders slump forward slightly. “But when my grandmother passed away, we all stopped going back there, and we just lost that connection.”

Although Wilson’s work is nothing if not realistic, each piece contains elements of symbolism that could be lost on the casual viewer. In the painting of Grandma Pigaboot’s house, the electrical service entrance — where the home had once been connected to a power line — is frayed and disconnected. That’s exactly how Richard Wilson felt in 2020, a year that saw a pandemic cripple the globe and political and cultural turmoil seize the heart and soul of the nation. Wilson used his art to reconnect with his family, his community and the landscape that once brought him so much joy.

Although he had featured his grandmother’s house in previous works, last year he found himself wanting to paint it again, and this time he wanted to include a family member. He called up his Uncle Bill and asked if he could come take some photographs of him. Uncle Bill happily obliged. It had been a while since they’d seen each other.

“We started talking about old times,” Wilson says, “and he started posing for me, and I started taking pictures of him. We had a great time.” But Wilson wanted to keep their reunion a secret. “I told him, ‘Don’t tell your children I’m doing this painting,’” says Wilson. “I wanted to put it on Facebook to see if they recognized the house and recognized that their father was in the painting.”

Imagine Wilson’s delight when, after posting the finished painting online, Uncle Bill’s youngest daughter wrote this: Hey, cuz, I really like this piece. It reminds me of back in the day, and the man in the picture reminds me of my pops. 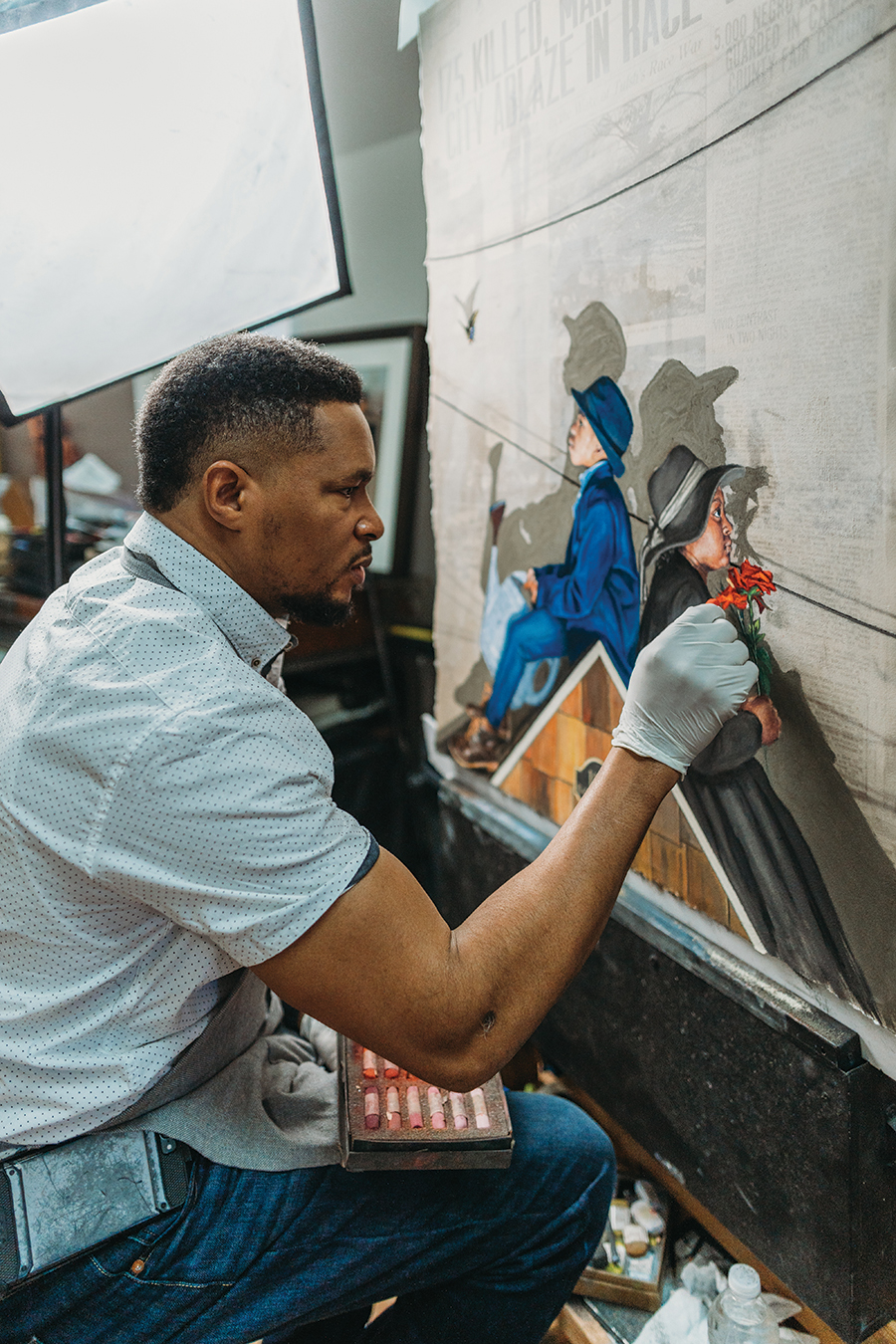 Comments from other cousins followed, each expressing tender sentiments.

“And then they started buying prints,” Wilson says, supporting him at a time when art shows had been canceled due to COVID. “It brought us all back together.”

Of course, the house in the painting represents much more than just a place. Wilson’s grandmother bequeathed him a legacy that highlights the importance of family, faith, land and self-reliance — all of which Wilson has made use of throughout his path to becoming a full-time artist against incredible odds.

“My grandmother took us around and made sure that she introduced us to all of our family members,” Wilson says. “She was adamant about that, about knowing who your people are.” He stops speaking and smiles as if a memory is playing through his mind. “She also taught us how to be entrepreneurs. We used to turn in Coke bottles and get cash for them, and then we’d turn around and buy candy and sell it. Or we’d make Kool-Aid and turn it into freeze cups, and then we’d sell those.” She also taught Wilson and his siblings and cousins how to make use of the land by taking them fishing and teaching them how to sew gardens. And she instilled the importance of faith in their lives by ensuring that they accompanied her to church.

Richard Wilson has won countless awards for his art, which has been featured in television shows and films, showcased in public and private collections and purchased by the likes of the late Hank Aaron and Gladys Knight. Those early lessons from his grandmother have allowed him to turn a childhood spark of inspiration into the passionate flame that fuels his work. His Shadows Series makes that clear.

But Richard Wilson acknowledges that not everyone is as lucky to have had the family and influences he’s had. Yet that’s the great thing about forging a connection with people you love.

One could say the same about living your dream.  OH

Wiley Cash is the writer-in-residence at the University of North Carolina-Asheville. His new novel, When Ghosts Come Home, will be released this year.