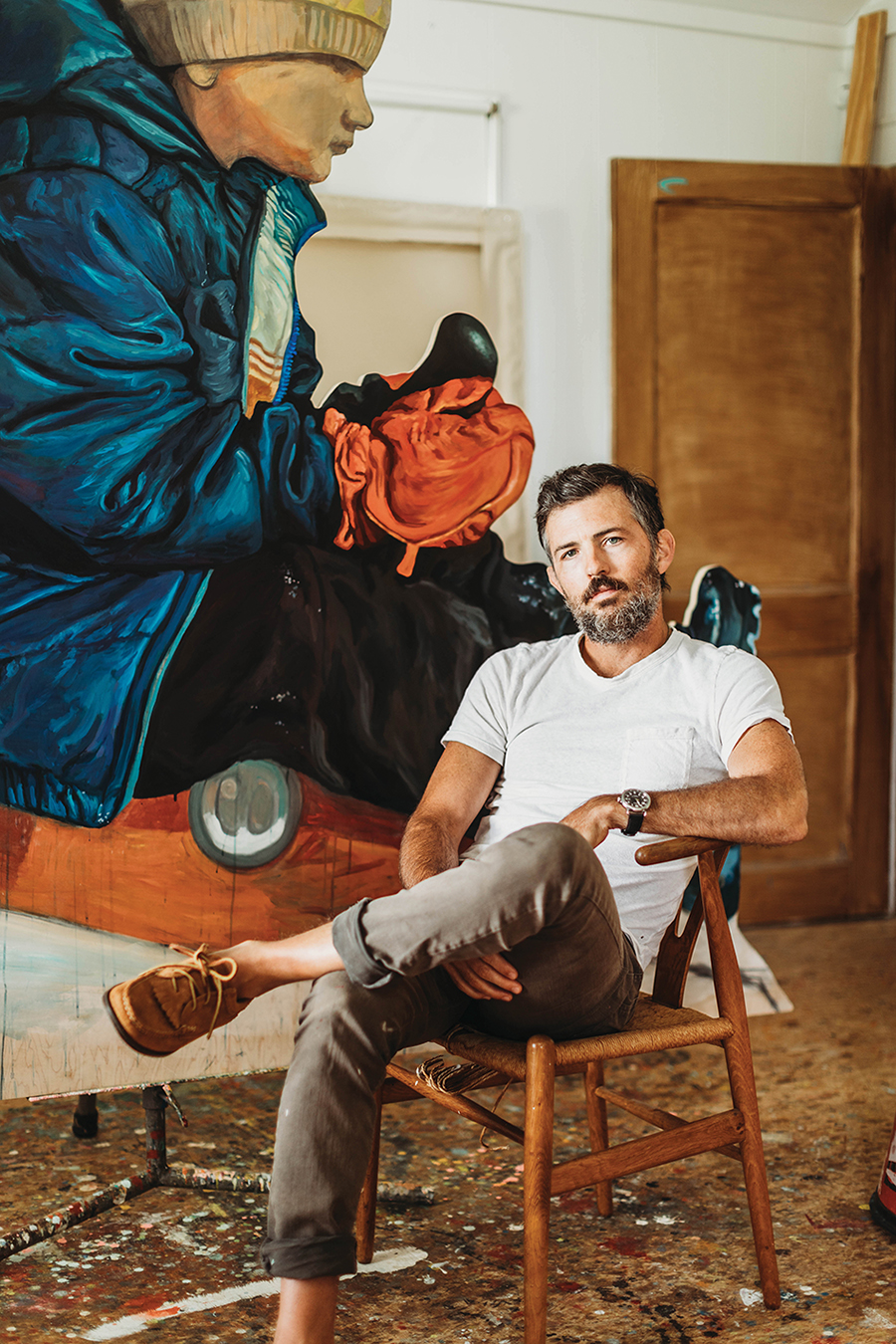 For a man whose music I’ve been listening to for almost two decades and whose face I’ve seen everywhere from the Grammy Awards to the Today show to the 2017 documentary May It Last: A Portrait of the Avett Brothers by Judd Apatow, Scott Avett was surprisingly easy to reach. After a couple of calls and texts to mutual friends, my wife, Mallory, and I arrived to interview him one day in early August. He met us in the driveway of the small house he’d converted into an art studio in the country about 15 minutes outside of downtown Concord, North Carolina.

Most North Carolinians, as well as music lovers around the world, know Scott as the other half of the Avett Brothers, who, along with his younger brother Seth, bassist Bob Crawford and cellist Joe Kwon, have sold millions of records and whose career has carried the band from small stages in college towns to the Grand Ole Opry to Madison Square Garden and beyond. But Scott knows himself best as a man whose purpose is to create, and painting is as much a part of his creative life as songwriting.

While his visual art has rarely been exhibited publicly aside from a 2019 show at the North Carolina Museum of Art, Scott has been a working artist since graduating from East Carolina University in 2000 with a Bachelor of Fine Arts in studio art. His paintings and drawings most often speak to family life and the natural world in rural North Carolina, but his work is in conversation with the many cultural and artistic influences he encounters on the road and in his reading life.

In our time together, Scott will rattle off quotes from French Impressionist Edgar Degas and the Trappist monk and mystic poet Thomas Merton the way some of us might casually discuss Monday Night Football or the day’s headlines. It’s clear to me that while his work portrays what one could see and hear if one were to spend time shadowing him during his daily life on the land in Concord, there is a deeper spiritual mystery residing in the work that speaks to the same unseen hand that guides emotions and ideas like love, duty, purpose and one’s role in them all.

This mystery is perhaps what Scott refers to as “the revelation of meaning beyond the physical act of making” that informs his exhibition, “After the Fact,” which is running through October at the Greenville Museum of Art in Greenville, North Carolina. This exhibit will run concurrently with “Purpose at Random,” Scott’s show at the SOCO Gallery in Charlotte, which began in September and will run through November 2. The show in Charlotte features new oil paintings that Scott began working on in the early months of 2020, which means the work was created during the pandemic when he would have otherwise been on the road with the band. In a press release for the show, Scott says, “I’m not sure that it was easier to paint during the pandemic but it was certainly more available than playing concerts. Painting is a solitary activity. The more time alone the better, I think. The pandemic provided space.”

On the day we meet him, the only calendar space Scott has is a two-week break from touring, and so he’s at work completing a painting that will be featured in one of the upcoming shows. Inside, his studio reveals itself to be a place in creative flux. Paintings either hang on the walls or lean against them, some in various stages of completion. Hiding amongst them — and he will show it to us just before we leave in a few hours — is an early draft of a painting of singer/songwriter Brandi Carlile, the final draft of which appeared on the cover of her 2018 multi-Grammy Award-winning album, By the Way, I Forgive You. 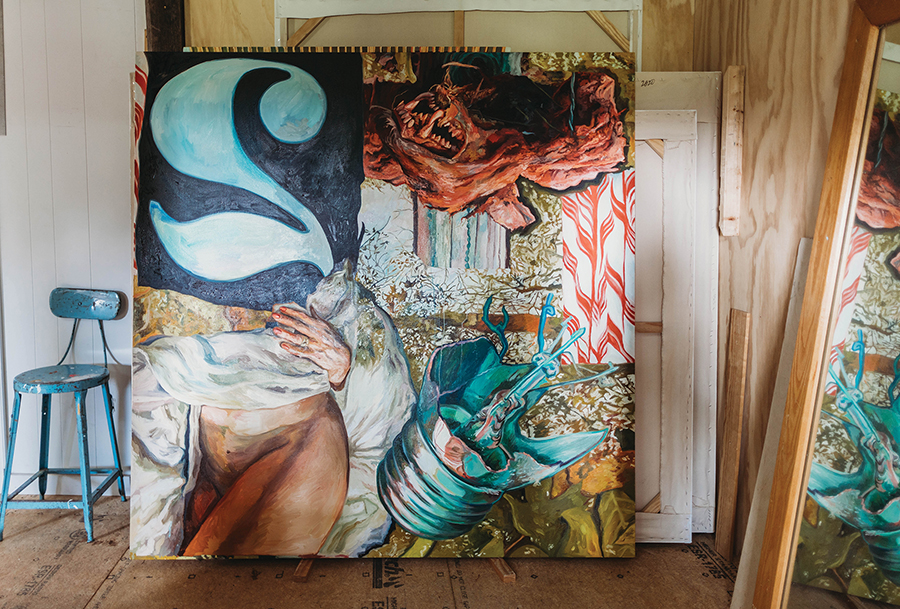 We follow Scott into an open space, past a low counter where his kids’ works-in-progress are waiting for their return. The studio is bright and airy. Morning light pours through the windows on the east side of the house. Scott stands in the middle of the room with a cup of coffee brewed by the Concord coffeehouse, Verb, in hand.

As Mallory unpacks her camera gear, I tell Scott that I grew up in Gastonia, which is on the west side of Charlotte, while Concord sits on its east. We talk about what it was like to be raised so close to Charlotte in the 1980s and ’90s without much awareness of what went on in what seemed to us to be “the big city.” We joked that the only time we went into Charlotte was to go Christmas shopping at SouthPark.

“That was the fancy mall,” Scott says, smiling. I tell him that once, when I was young, I spotted NASCAR legend Jeff Gordon with his first wife at SouthPark, and that leads us to a conversation about race car drivers as Sunday races served as the backdrop of our North Carolina childhoods, especially for Scott, given that Charlotte Motor Speedway sits just a few miles away from the place where he was raised. I ask Scott how he and his family ended up on this expanse of land where he has remained despite his world travels, his parents still living just a few miles down the road, and his own family’s home tucked into the woods behind his studio.

Scott’s father was born in North Carolina and grew up the son of a Methodist minister whose calling took the family around the state. Scott’s mother was an Army kid born on a base in Germany before being raised in Kansas and Virginia. Just before Scott was born, his parents and older sister moved to Alaska, where his father hoped to get work as a pipeline welder, but the job fell through, and on the way back south the family lived in Cheyenne, Wyoming, for about a year. That’s where Scott was born. But they eventually found their way back to North Carolina and to the landscape where Scott’s grandfather had touched so many lives. When the family decided to settle down outside Concord — his father traveled as a welder and his mother taught school — they were gifted 2 acres and an old house by an elderly couple who had long admired Scott’s grandfather. His father renovated the home, and Scott’s parents lived there until the house burned down last year. But fire can’t burn roots, and Scott’s parents rebuilt, and they continue to reside just down the road from him. 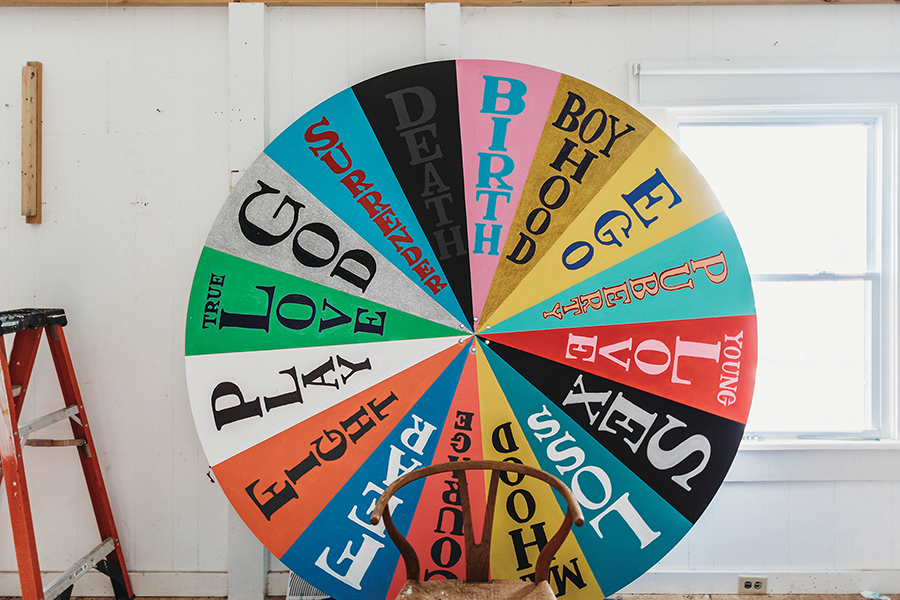 When Scott and his two siblings were growing up, his parents made certain that education was available to them, especially if the kids were hungry for it. “They were intent on that,” he says. “They said, ‘We will see to it that you have an opportunity to go to school. If we’re broke, we’ll rob a bank to pay for it. If you are interested in education, you will get the opportunity.’” All three children went to college.

It’s clear that Scott values his children’s education as well, especially in the arts. Aside from the makeshift studio set up for them alongside his own work, his daughter regularly participates in after-school tutoring sessions in creative writing led by the owner of the local bookstore, Goldberry Books, in downtown Concord. It’s easy to imagine a holistic education in art and outdoor experiences unfolding for children in a landscape like this. If I sound wistful when imagining such a childhood it’s because I am.

But our conversation turns toward what could be considered the more practical matters of being a creator, namely, what happens when your hobby — whether it’s painting or songwriting or writing novels — becomes your job. Is the mystery of creation compromised?

“As soon as you’re doing something to pay bills, I don’t know that you’re really following your heart,” Scott says. “We’re called to have a purpose, but you can slip off that purpose really quickly, and all of a sudden the purpose becomes to pay the bills more easily. I want to avoid that. There’s a mystery in creating. I want to follow the mystery and get as close to it as I can. But when I’m caught up in success or anything else it has nothing to do with getting close to the mystery. It just distracts from it.”

Jeff Gordon and NASCAR are still lingering in the corners of my mind, and I mention that Gordon retired from driving at the age of 44, and both Scott and I are now in our mid-40s. I tell him that I doubt Gordon’s physical skills were diminished at that age, but perhaps his awareness of the risks he was taking became more apparent the older and wiser he got. I ask Scott if he’s more aware of the choices he’s making at this stage of his career and if his skills are continuing to sharpen.

“I feel like I’m in the sweet spot, ability-wise,” he says about both performing music and painting. “Physically, I can do it, and, mentally, my tools have accumulated quite a bit. I see evidence of that when I can make plans about what project I am going to execute. Ten years ago, I might say, ‘I hope I can do this. I hope I don’t flub it and get stuck on something.’” He pauses for a moment. “I think I hold it all a little looser than I ever did, and I’m not going to be blown away by whether it hits or doesn’t hit. I don’t know why, but there’s now a barometer, and sometimes it says, ‘Hey, enough, you have enough. Now, with enough, can you lean into your purpose?’” 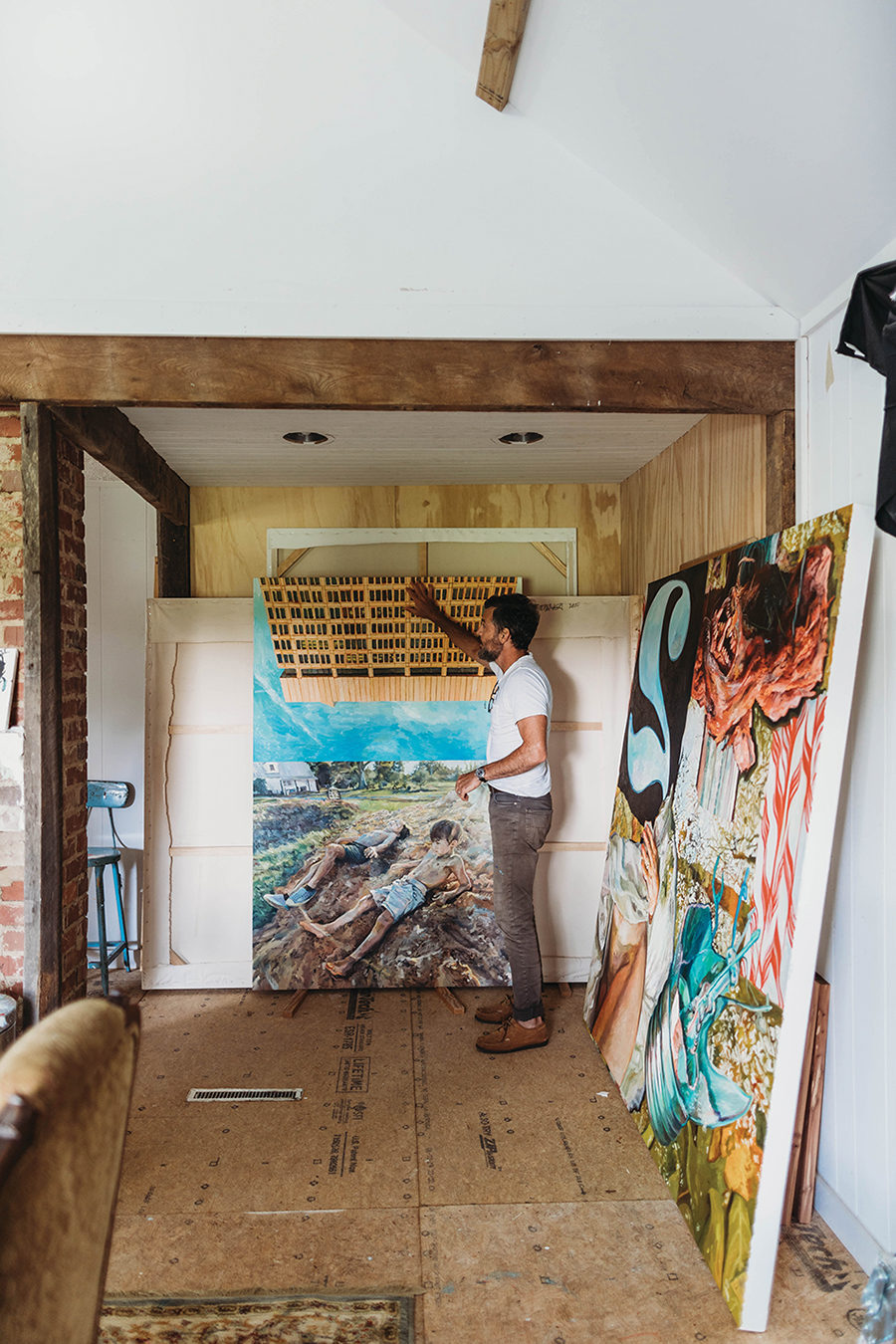 I ask him how it feels to let go of a painting after someone buys it. After all, when he writes a song he can always perform it whether or not it’s on a record or in front of a live audience. “It rips pretty hard,” he says. “It really does. I see painting as me telling my life story, and as I do that, it’s kind of tough to imagine that some of it’s in Colorado, some of it’s in New York, some of it’s in Texas. But I haven’t gotten too attached to any of them so far. There are only three I won’t let go of. One of my wife and two of our kids that I painted in bathing suits. They’re just portraits of them, but I’ve said those aren’t for sale.”

I ask him if his art is a result of his being anchored to this land given his family’s history on it. He pauses as if painting an answer in his mind.

“You have to find a corner of the world,” he says. “I truly believe that on these 80 acres there is more to explore than I can do in a lifetime. There is so much work to be done here, and by work I mean purpose. To me, my purpose is realized here. My purpose is to create. There are a lot of leaves to peel back here, and there are a lot of experiences happening.”

He pulls his phone from his pocket and flips through his photos, landing on a picture he took the night before of his 7-year-old son just after he’d fallen asleep. “There’s nothing not timeless about this,” he says. “If my purpose is to recognize relationships and see things, this is a good place to be.” He laughs and puts his phone away. “But where’s not?”  OH

Wiley Cash is the Alumni Author-in-Residence at the University of North Carolina at Asheville. His new novel, When Ghosts Come Home, is available wherever books are sold.

Art of the StateDepartment, October 2022