The artistry of printmaker Katie Hayes 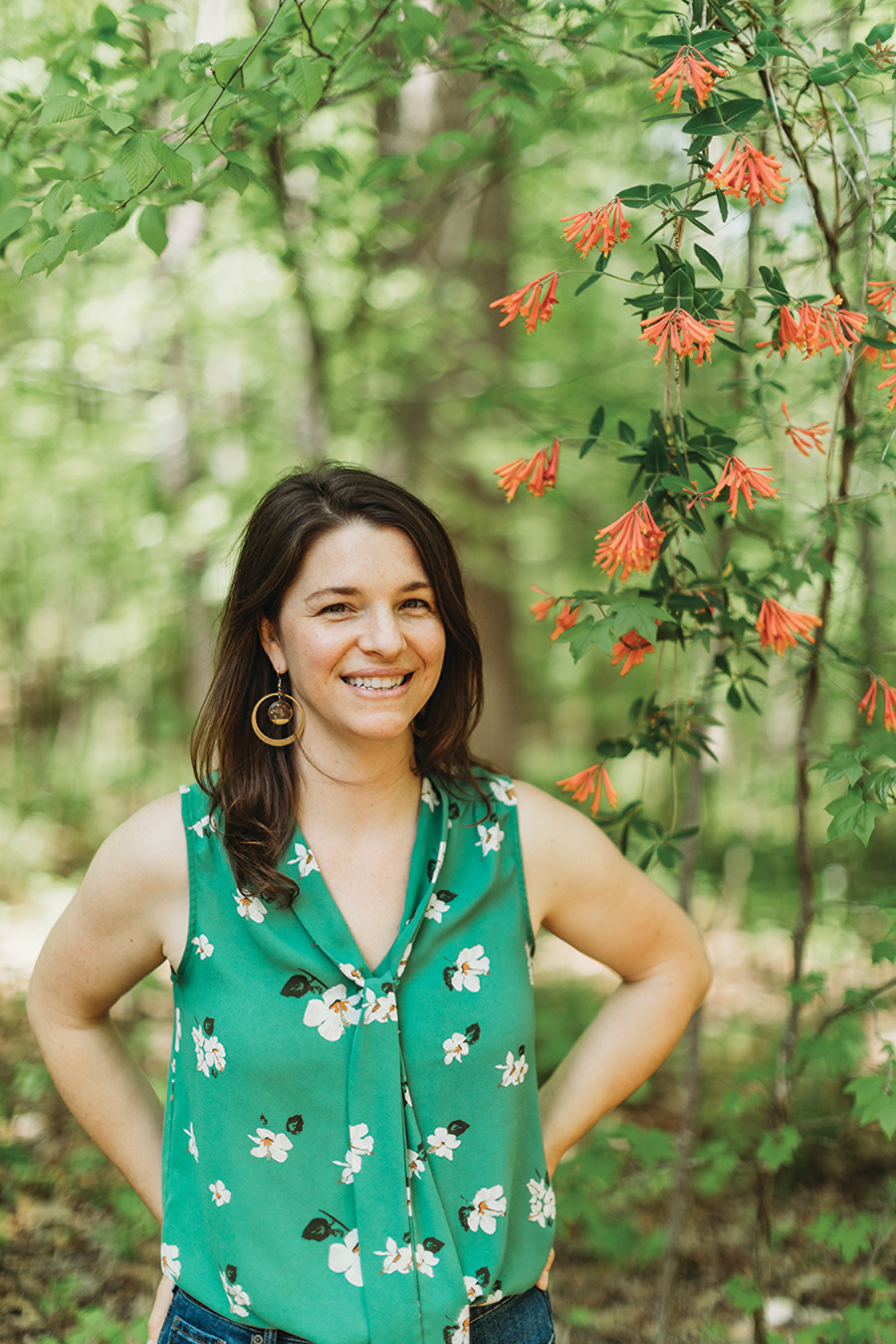 About half a mile down a gravel road off a two-lane highway in rural Hillsborough, block printmaker Katie Hayes is working in a light-filled studio above her garage. It’s midday on a warm afternoon in late April. Sunlight slants through a canopy of tulip poplars and oaks, trickling down to the dogwoods that make up an understory that shades countless azaleas wild with blooms. I can’t see it from where I stand, gazing at the forest from the sliding glass door at the back of Katie’s studio, but I can hear a nearby cardinal chirping against a backdrop of birdcalls that echo through the trees.

It’s not a stretch to say that the living things outside Katie’s studio parallel the flora and fauna portrayed in her prints: All around me, jet black herons with indigo wings stalk through shallow pools; brilliant monarchs and viceroys alight on purple coneflowers; scarlet tanagers perch on branches surrounded by yellow blossoms. Here, the wild things outside the studio’s walls have been tamed and contained, framed and matted, but no less alive than they would be in the natural world.

Unlike the wildness of the woods, Katie’s studio space is meticulously managed. Drying prints lean against the wall on one side of the studio. Rollers — known as brayers — and ink and instruments made for cutting or measuring hang in various places within easy reach. A basket of pre-ordered prints featuring a yellow lady’s slipper rest in a basket, each print partnered with a personalized handwritten note from Katie. The airy space is orderly and organized, a far cry from the world outside its walls.

“Setting this place up exactly as I need it feels really good,” Katie says. She is rolling midnight black ink onto a piece of plexiglass. “I never thought I’d have a place like this.” 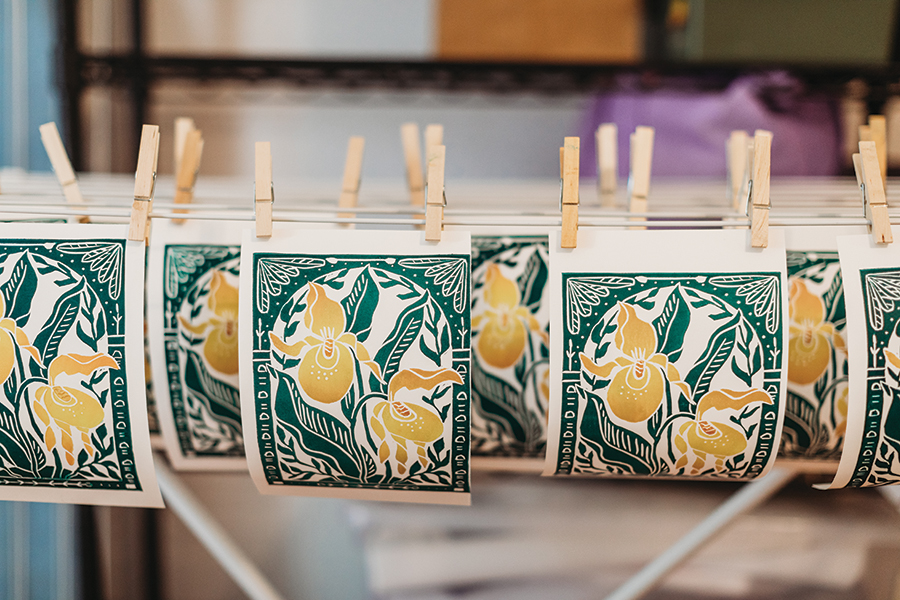 I know that Katie is talking about her studio, but she could be referring to the 10 acres she shares with Sean and their daughter, Millie, and son, Ben. Or she could just as easily be talking about Hillsborough, or even North Carolina, for that matter. Although she was raised in Cullowhee, North Carolina, at one point in her life she’d lived in 13 houses in four states, and that was before she and Sean settled in Ohio, where Sean worked for Oberlin College and Katie worked for a nonprofit, assisting high school students with everything from completing college applications to tasks like locating their Social Security numbers. With each move, whether it was from the mountains of North Carolina to the Piedmont to attend UNC-Chapel Hill, or from Carrboro to Ohio, Katie began to see her regional identity more clearly.

At the moment, Katie is using a heavy glass baren to smooth paper atop the block cut in order for it to absorb the ink that covers the block. The process of making a single print is long and tedious. After cutting a design into a block of linoleum, which can take anywhere from a couple of hours to a couple of days depending on the complexity of the image, Katie uses a brayer to evenly smear ink across a piece of plexiglass before using the same brayer to cover the block in ink. She then lays the paper over the block and runs the baren across the back of it. Most prints make use of more than one color ink, so each print goes through this process at least twice.

Katie made her first print in an art class at Smoky Mountain High School in Jackson County. She carved a linocut of a rabbit, and after her teacher put it on display someone offered to buy it. She sold it for $15, and while she didn’t return to printmaking for many years because she didn’t have the tools and materials, the early satisfaction of knowing that her work had spoken to someone stayed with her. 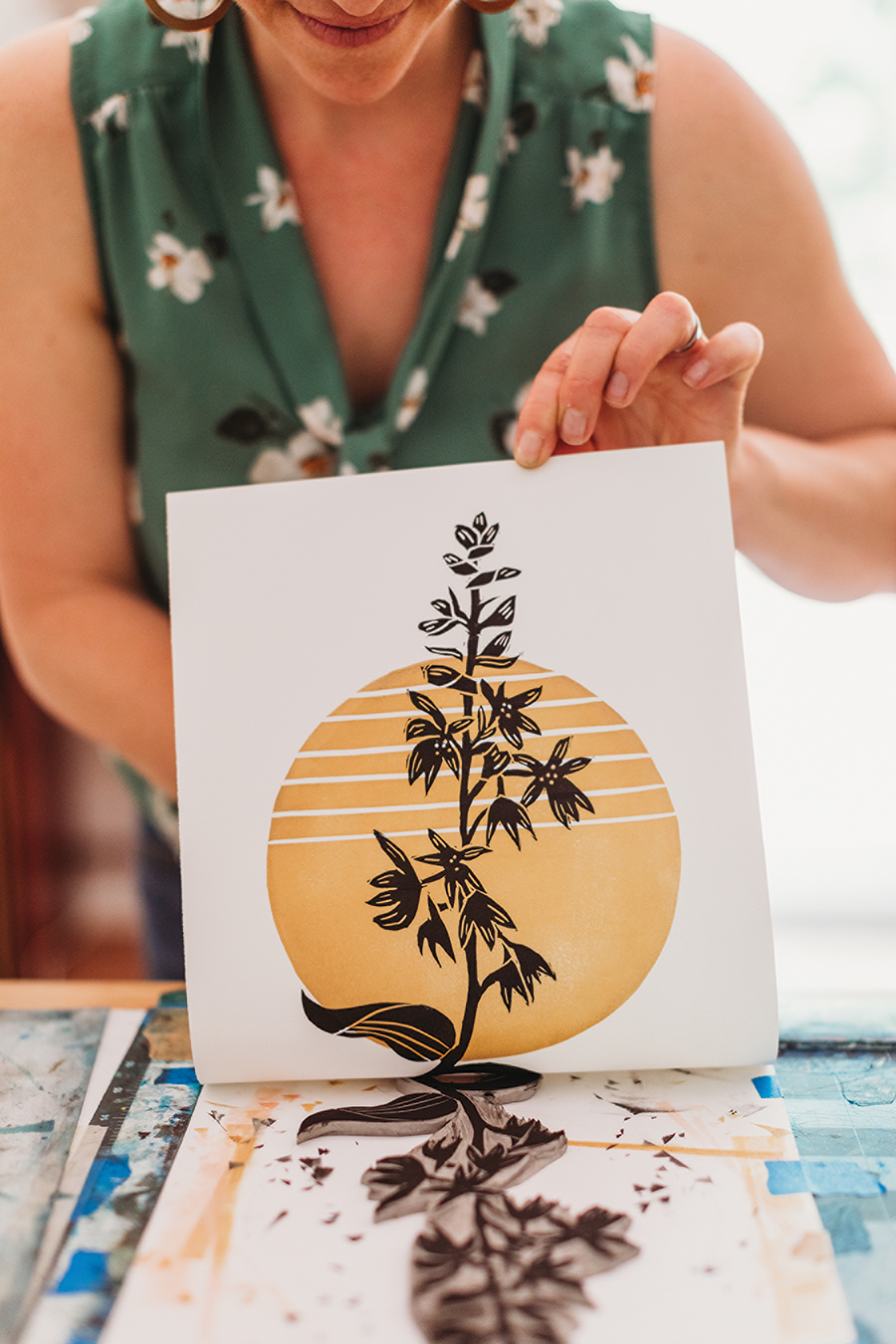 What also stayed with her was the effect her grandmother’s art and practice had on her. Shirley O’Neill was an accomplished amateur watercolorist, and she always made sure that Katie had good materials — high quality paints, brushes and paper — in order to do her best work.

I watch Katie make print after print, nervous that our conversation will distract her and cause her to make a mistake, and also impressed at how she seems both careful and carefree. The block she is working from now is for a 12×16 inch matboard print from her limited edition Mid-Century Botanical series. Each print features a colorful design — a gold sun, a soft pink segmented circle, a gray oval — overlaid by the black shapes of various flora: Virginia bluebells, native ferns and peonies. She peels back the matboard, revealing a cardinal flower set against a segmented gold sun. I watch her repeat the process of imprinting cardinal flowers on several more matboards with various colorful shapes already set onto them, and each time she reveals the flower her face lights up in a smile.

While the process is repetitive, it doesn’t allow Katie to shut off her brain and rely on rote memory. She is constantly assessing the amount of ink on the brayer, the placement of the paper against the block, and the countless other adjustments she makes during a single print run, which she limits to 100. There are no reproductions. Every print is handmade, distinct and limited.

Katie’s designs don’t only end up as hand-pulled prints made in her studio; her designs are also printed on everything from fabric to wallpaper by Spoonflower, a global marketplace based in Durham that manufactures textiles, connecting artists directly to consumers with no overhead costs for the artists. 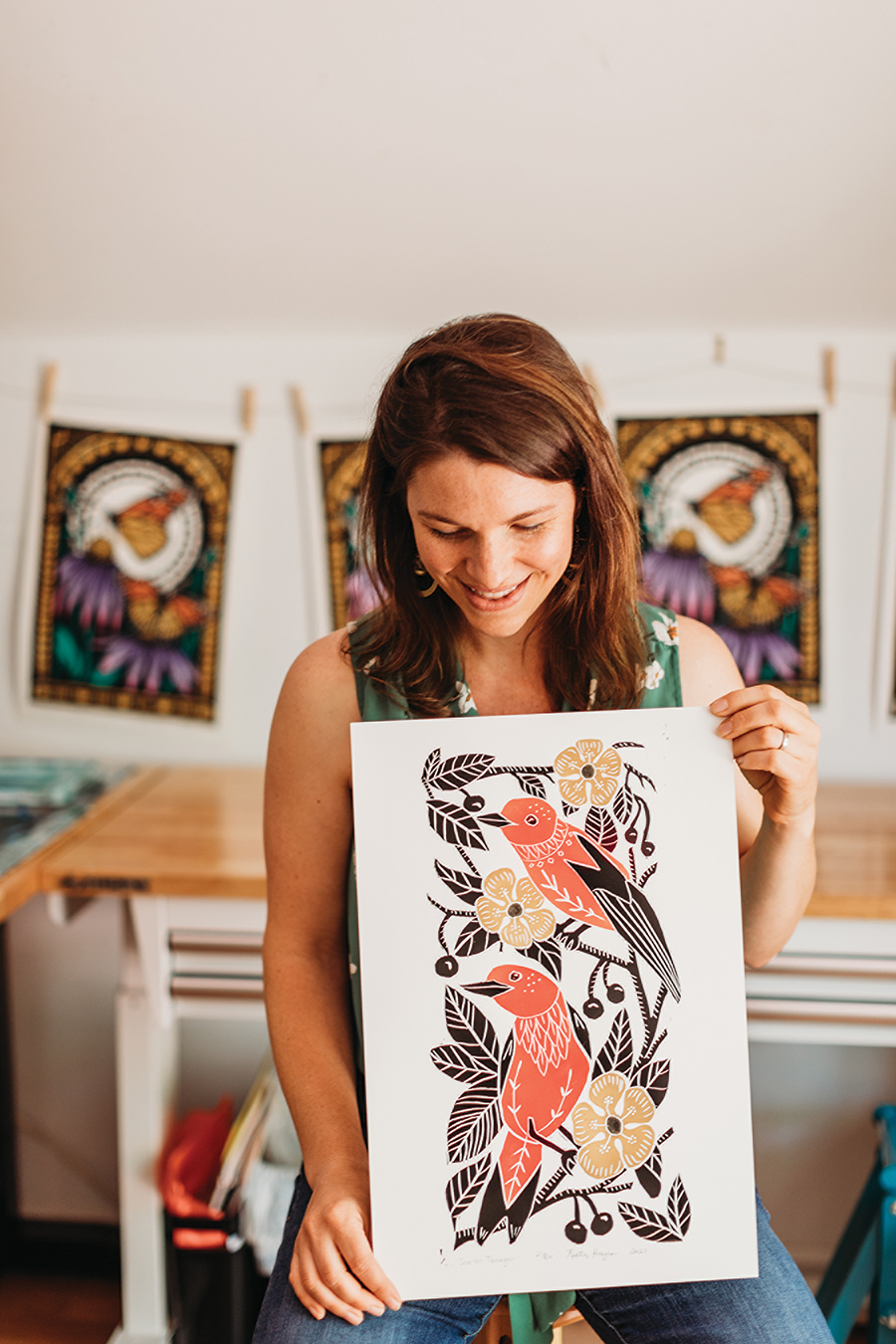 Katie creates images of the flora and fauna of the Southern landscape she knows so well not only because she’s a native, but also because she gave birth to a daughter in Ohio who was upset by the family’s move south to Durham five years ago, when Sean took a job running operations for a firm that services solar farms.

“The move was a chance to get back closer to family,” Katie says, “but my daughter was 4 1/2 at the time, and when we moved it was really hard for her. She had a newborn baby brother. We had lived in a great neighborhood in Ohio, and she’d had tons of friends at a great school, and she was uprooted. The way I got started creating these images was at night. When she would go to bed, I would make her these coloring pages, where I would illustrate different native Southeastern flora and fauna. During the day I would have my hands full with the baby, but I would whisper to her, ‘Pssst, I made you some new coloring pages. These are passion flowers. They grow wild here and look like jungle plants.’

“For a long time I resisted doing art professionally. I always saw the art world as something really exclusive,” she adds. “It wasn’t for redneck girls from Cullowhee.”

But moving to Ohio made her reconsider the role art could play in her life, and the lives of people both inside and outside the region.

“When I moved to Oberlin, people always had all these misconceptions about North Carolina and the South; it’s either Gone with the Wind or Duck Dynasty. Neither of those are authentic to my experience,” she says. This, combined with connecting her daughter to their new home via images of the Southern landscape, inspired Katie to develop a library of images, eventually culminating in a printmaking shop she calls the New South Pattern House.

“As parents we’re always trying to curate the best parts of our childhood,” she says. “That’s how I think of my Southern identity with my kids and, frankly, my business. What parts do I want to highlight? We have this incredibly rich biodiversity. We have beautiful, vibrant cities. What are the parts we want to move away from? When people think of Southerners, do I want them to think of the Confederate flag? No, not for me. I want them to think of coneflowers.”  OH

Wiley Cash is the Alumni Author-in-Residence at the University of North Carolina at Asheville. His new novel, When Ghosts Come Home, is available wherever books are sold.