Salt of the Earth

Building a business together

The interior of the building is warm and smells like the ocean. The walls and ceiling are constructed of white corrugated plastic sheets, all of them glowing beneath the bright noonday sun. Nets hang from the ceiling above tables that hold large wooden trays, their bottoms lined with thick, restaurant-grade plastic.

Jason Zombron looks down into one of the trays of white crystals that seem to have arranged themselves in haphazard patterns. If you stare long enough, it appears that the ocean is in each tray, dozens of tides frozen in time, doing their best to return to their previous form. After all, just a few days ago, this salt was floating somewhere in the Atlantic, but now it has made its way here to a piece of land in Burgaw, North Carolina, where Jason and his wife, Jeanette Philips, own and operate Sea Love Sea Salt. 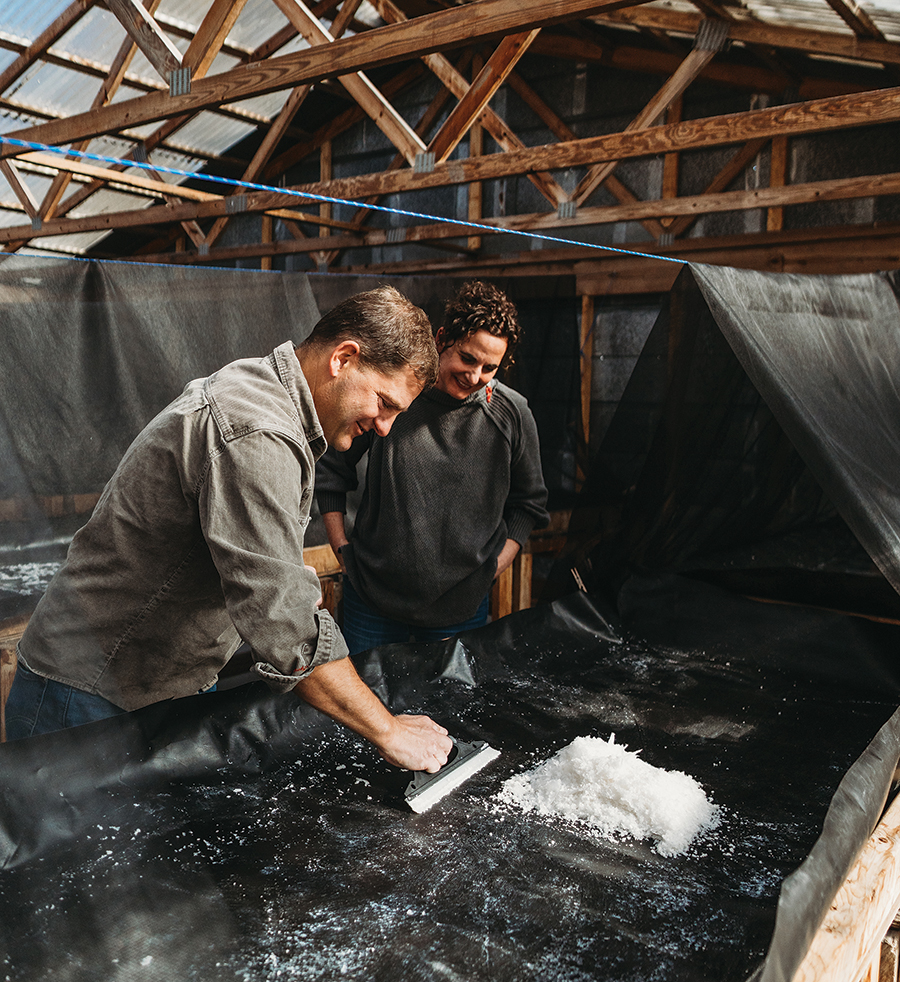 Jason picks up a small shovel and scoops up a load of crystals, which have hardened into countless geometric shapes, from squares to pyramids. Jeanette stands nearby. “I never get tired of this,” she says, her voice quiet as if she’s whispering a prayer. “Every time I witness it happen, it takes my breath away. It sits here with the sun and the heat until it’s ready to be harvested. We’re not doing anything to make this happen.”

While heat and evaporation are the final steps in creating salt, Jeanette and Jason actually do a lot to make it happen before it gets to that point. The venture begins in Wrightsville Beach, where, in a process and at a location that Jason and Jeanette are wisely hesitant to disclose, water is extracted from the ocean and pumped into a 275-gallon tank on the back of a trailer. From there, the water is transported to rural Burgaw and the 3-acre farm that Jason and Jeanette own. The water is then pumped from the trailer to a second tank, where gravity takes over and the real work begins. Jason and Jeanette fill tray after tray with water, kinking the hose to stop the flow while arranging the full trays on tables throughout the salt house. The trays will sit in the heat however long it takes for the water to evaporate, leaving nothing but the salt behind. 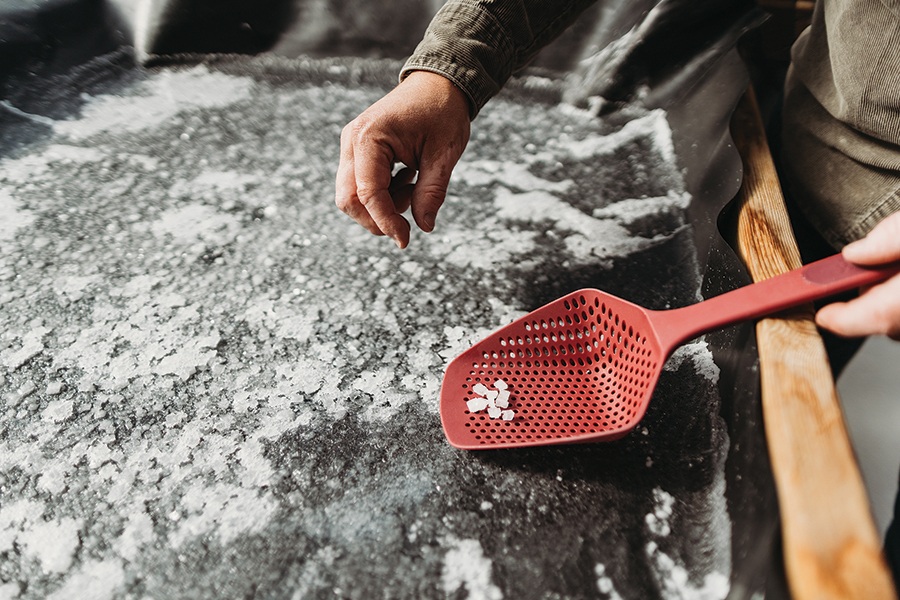 The labor can be taxing, and that’s before the harvesting and the blending of salt with other ingredients even begins, but Jeanette and Jason delight in the work. After all, the chance to spend as much time together as possible is what led them to step into the business of making salt.

“Whatever business we set out on, it had to get us together,” Jason says. “That was the most important thing.”

“It feels great because we’re passionate about this,” Jeanette adds. “And it’s the first time we’ve gotten to do something creative together.”

The two met on a blind date in Asheville. At the time, Jeanette worked in public health, and Jason was in sales for an outdoor provisions company. They both traveled a lot, and they wanted to spend more time together. Jeanette’s sister lived in Seattle, and so the young couple set their wagons west. They made a life in the Northwest, forging successful careers and raising two young children, and they soon realized that they were both interested in food, the growing of it, the preparing of it, and, of course, the eating of it. They also began experimenting with various ways of using different kinds of salts in their cooking.

While they loved living in the Northwest, they began to feel hemmed in by their careers and schedules and missed the sense of community they’d felt in the South. Jeanette was born and raised in Decatur, Georgia, and Jason just outside of Washington, D.C. 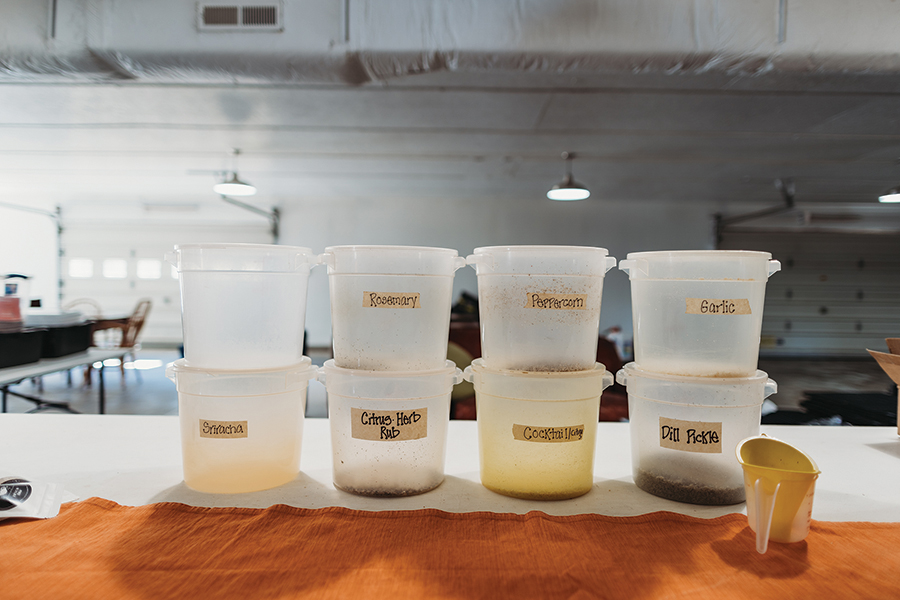 “We wanted to live close to the water,” Jason says. When they moved to Wilmington a couple of years ago, they began to look for a shared business opportunity they could devote themselves to. They learned that Amanda Jacobs, the founder of Sea Love Sea Salt, was looking to sell her growing business. When they met with Amanda, Jeanette brought along a salt recipe she had developed back in Seattle. While there were other suitors who wanted to purchase the business, “No one else brought Amanda a salt,” Jeanette says.

Since purchasing the company, Jeanette and Jason have worked to develop new salts to add to a lineup that already includes citrus, Sriracha, rosemary, dill pickle and others. Two flavors they brought with them from their experiences in Seattle are herb and fennel, and they regularly test various salts at local farmers   markets in Wilmington, tracking the responses of their customers. They also have a thriving connection with numerous local restaurants and breweries, most of whom pride themselves on sourcing local products, as do Jason and Jeanette. Almost all their salts are flavored with North Carolina-grown produce. 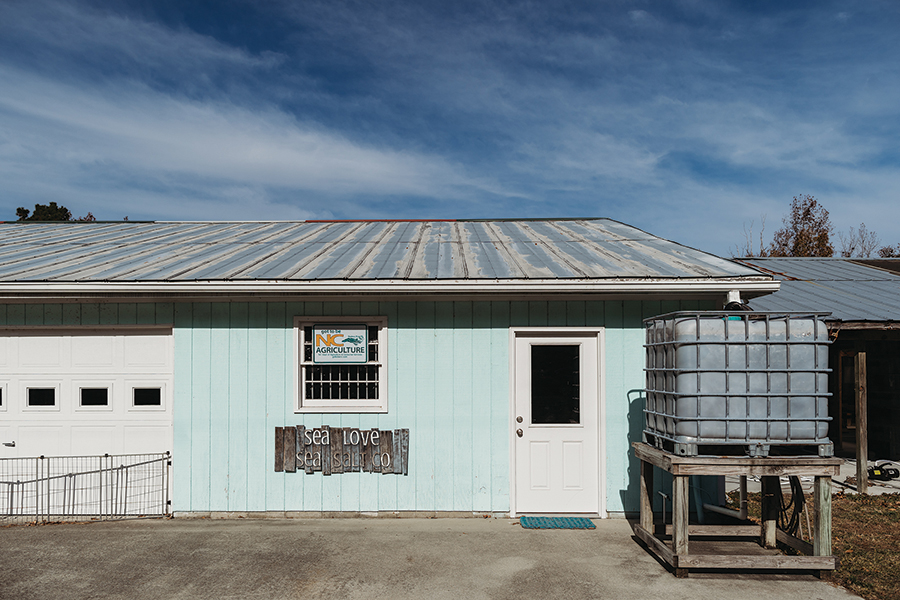 Aside from developing new salts, Jeanette and Jason are planning to develop the land where the business sits. While it contains the salt house and a warehouse, they are building a hoop house to double their capacity — important during the winter, when the time it takes for water to evaporate goes from 10 days in the summer to as long as three weeks in the colder months, when days are shorter. They are planning to host farm-to-table meals featuring local chefs and artists, and are thinking of other creative ways to invite the community to this wooded, quiet piece of land. 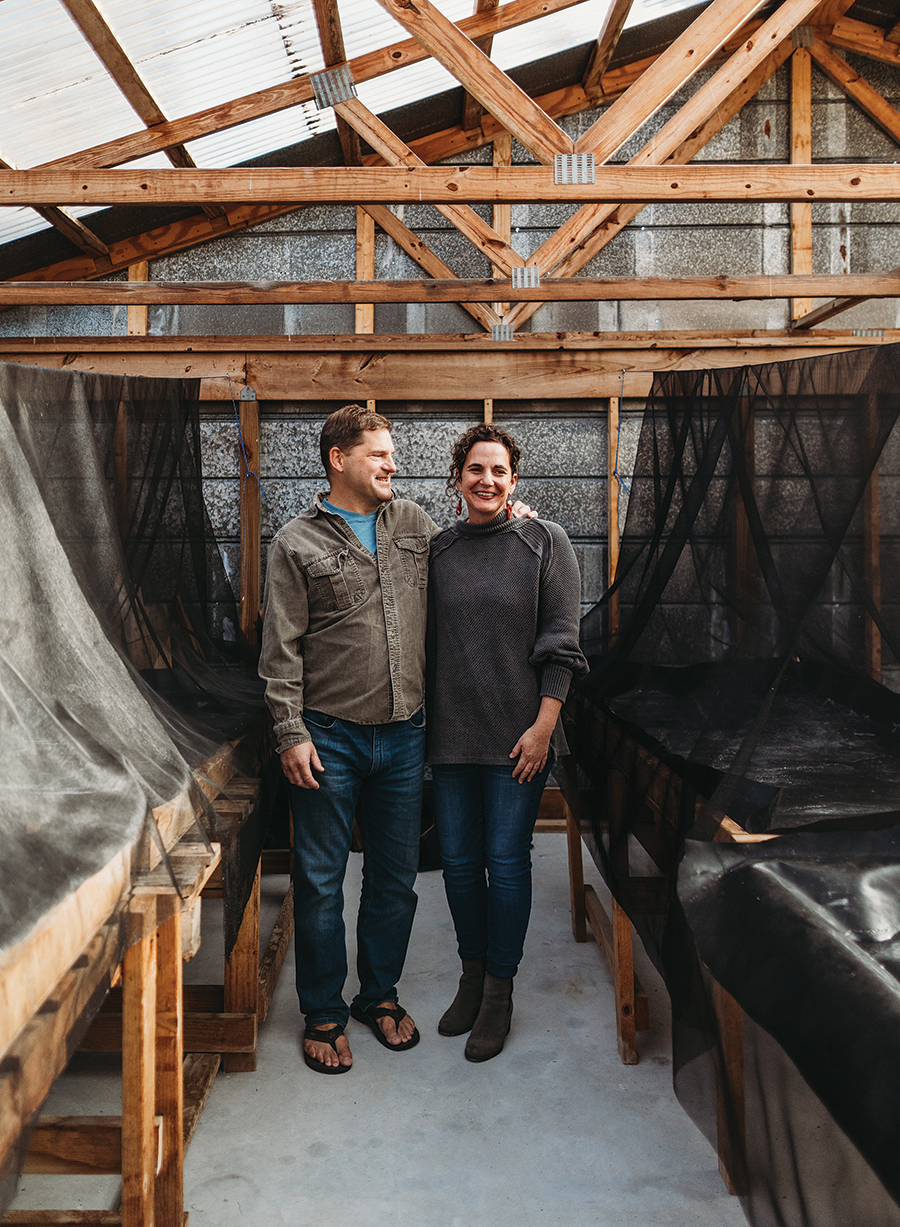 Jason pours scoops of salt into fine mesh bags that he hangs from the ceiling, salt that could have begun on the other side of the world, now suspended from the rafters in rural North Carolina.

“People come here for the ocean,” he says. “This is giving them the chance to taste it.” OH

Wiley Cash is the Alumni Author-in-Residence at the University of North Carolina-Asheville. His new novel, When Ghosts Come Home, is available wherever books are sold.