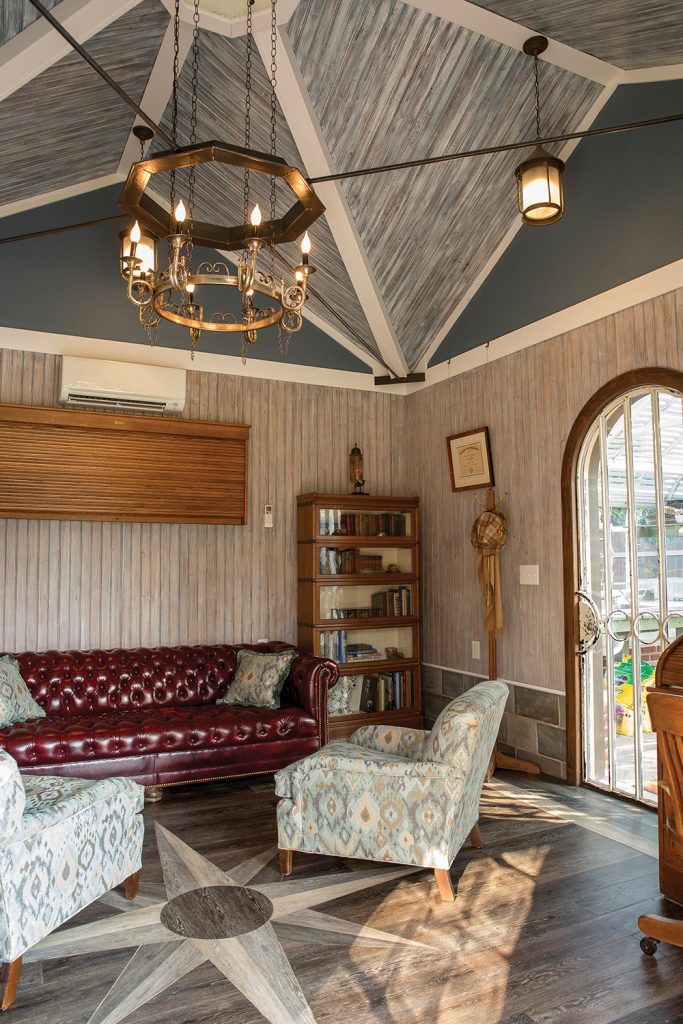 He went there three years ago, to the heart of Greensboro’s Irving Park, to give a quote for reupholstering a built-in sofa. That’s when the greenhouse came up. The homeowner said she was tearing down the steel-and-glass structure to make room for a bigger garage.

As the owner of Murphy’s Upholstery, he’d driven past the white-ribbed bubble many times. Joined to the garage, it seemed like a fixture at the home that once belonged to Ralph Price, the son of Julian Price, long-ago chairman of Greensboro’s cornerstone Jefferson Standard Life Insurance Company.

“I just thought it was super cool, and I hated to see it destroyed,” says Walker, who dashed off a $1,000 check for the greenhouse. He and a couple of friends spent nearly two weeks disassembling it.

“We took it down rusty screw by broken glass pane,” he says. “It fought us at every turn. A screw that should have taken 20 seconds to remove took 20 minutes.”

Walker had the perfect place to resurrect the greenhouse: the backyard of a house he’d just bought, and planned to rent, adjacent to his own home on Mayflower Drive near UNCG. Maybe, he thought, he would build a potting shed as the greenhouse’s new fourth wall.

There was one hitch: He had no cash. So the glass and steel rested in pieces in the yard for a year until he sold Murphy’s Upholstery, which put the green in greenhouse.

Walker called on builder Larry Shaver and architect Carl Myatt to create a new companion for the glass nursery: an office from which Walker could tend the rental properties that he owns with business partner Jim Menius.

Less than a cottage but more than a shed, the 16-by-16 foot Craftsman-tinged-with-Victorian office features a copper-topped cupola crowned with a classic rooster-based weathervane; a four-gable roof with yawning copper leader heads and downspouts at each corner; and a flagstone patio to welcome visitors.

Inside, the vaulted ceiling snatches your breath with four deep wedges — the undersides of the converging gables — that peak in the middle with an oculus, or round window under the cupola.

Overhead, tension rods sprout from the four corners. They’re anchored in the center by an iron circle that hovers over a compass rose laid into the vinyl hardwood floor. The repetition of circles from oculus to floor was intentional.

A structural engineer made sure the room was solid. 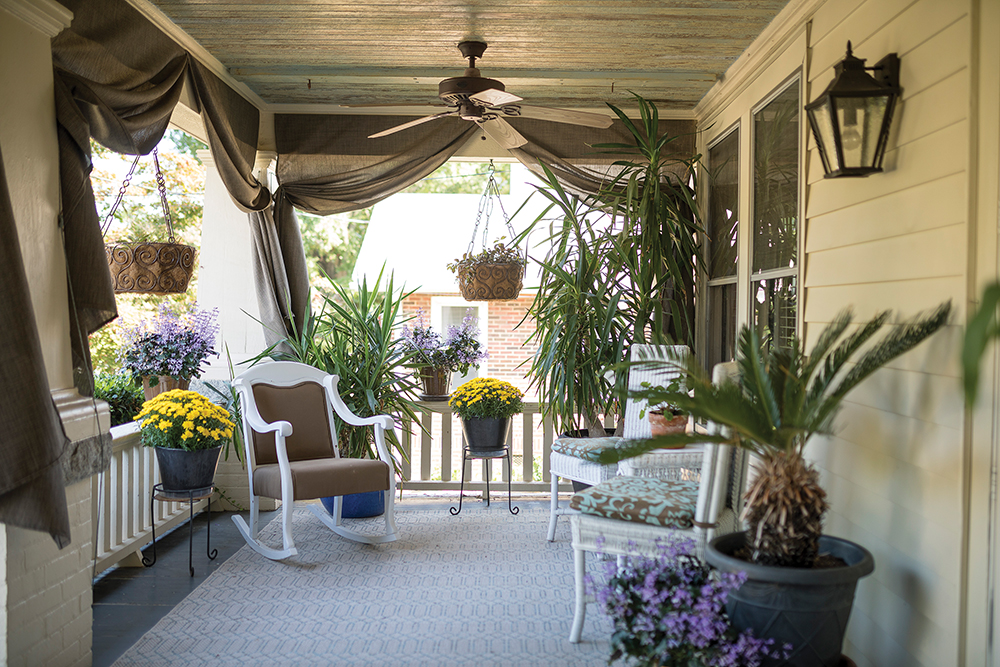 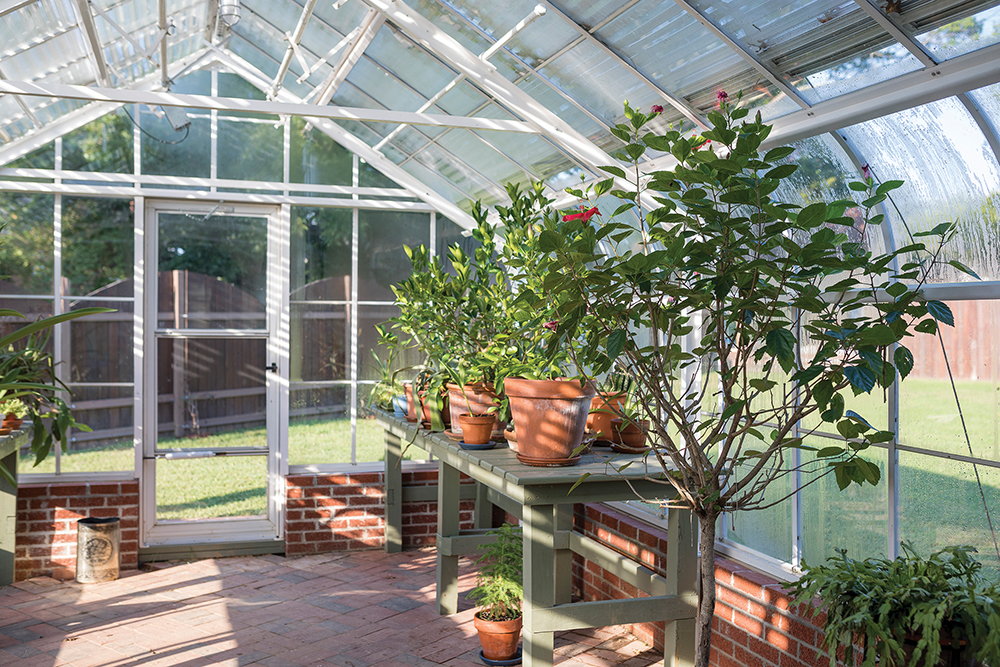 Walker made sure the room sang. He populated it with handsome furniture — barrister bookcases, a rolltop desk, a library desk, a red leather Chesterfield sofa, and a wall-mounted map case that houses 1940s Los Angeles schematics — population, road and utility maps — glued to fabric rolls.

A white iron door — Walker bought it from antiques dealer Mary Wells, who said it came from a department store — leads to the greenhouse, which sports a new foundation and brick floor laid by mason Michael McKinnis.

Heated with a small gas unit, it’s a wonderful place for plants to sunbathe and for people to escape nippy weather. Last year, Walker hosted a Christmas party on the coldest night of the year. Guests gladly signed up for tours of the greenhouse, which shelters Walker’s plants, some of which he has nurtured for 30 years. Many were gifts from dear friends.

“There are so many pieces out here that tie into my history or Greensboro history that I never feel alone,” says Walker. “I call this my happy place. I come out here to work, but it doesn’t seem like work.”

The greenhouse office sits in the yard next to Walker’s, but because of a drain line that crosses the yards diagonally, the structure is oriented at a diagonal, facing Walker’s fours-square Craftsman bungalow. The home has an interesting backstory, too. It was built in 1927. The first owner was Southern Railway engineer Andrew Waynick.

“The home was built to a nice scale,” says Walker. “The bones were absolutely wonderful.” 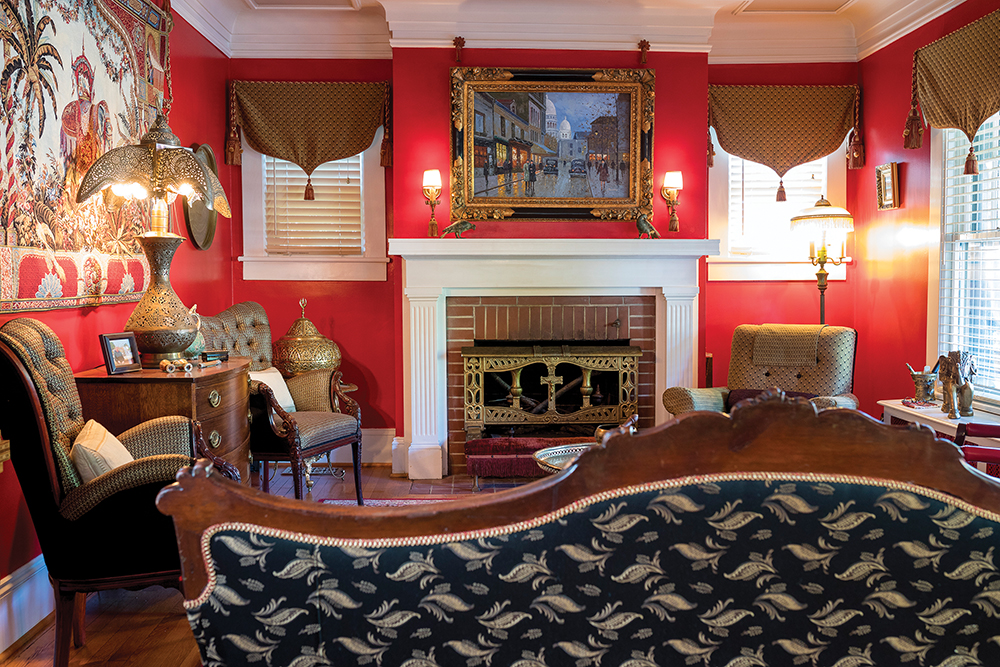 A native of Pinehurst, Walker first happened upon the house when he was a student of international finance at UNCG in the 1990s. A friend lived there, and over the years, Walker left the house with oddities such as a wooden leg that he found in the attic and the metal door to a coal-burning firebox. For years, Walker used the door as a yard ornament at his home in Sunset Hills.

Then, one day in 2000, after he’d veered away from the world of international finance and into the upholstery business (by way of a catchall job at Tobacco USA and a cooking gig in the Cayman Islands), he drove by the Mayflower house and noticed it was for sale.

“All it needed was a little love,” he says.

He summoned his father, Donald, a building inspector who showed up with a flashlight for a look-see.

Walker moved in and set about enhancing what was already there. He kept the radiators, which were tied to a functioning gas furnace. He added a forced-air system for extra warmth and chill, but the radiators steal the visual show, especially in the front room, where the grille harmonizes with antiques in a sanguine room that’s painted a color Walker describes as “Botticelli red.”

Among the eye-poppers is a huge brass censer with a coal-kettle base and domed, filigreed lid. In the same Middle Eastern vein is a brass lamp with a lacy metal shade with folds like bird wings.

Walker loves a curio. In his mind, finds are finds, whether they come from estate auctions, generous friends or curbside heaps.

“Certain things catch my eye. Sometimes, I don’t know if they’re worth anything or not, but it doesn’t matter,” he says.

He leans toward antiques but embraces modern amenities, which is why he upgraded the kitchen to include granite counters, custom cabinets, and coffered ceilings with removable panels for access to plumbing in the floor above.

As part of the makeover, Walker unmasked and embellished a nook that had been blocked by a double oven. He discovered the little room when he opened the door to a storage room and saw the backs of ovens.

The house contained more puzzles. For example, an exterior door led to a basement shower, sink and a toilet that Walker assumed had been for servants.

He later learned the bathroom was for the original owner, the train engineer, who came home from work covered in soot.

“He had to clean up before he came upstairs to the family,” says Walker.

The age of the house also meant a dearth of closet space in the bedrooms. Walker fixed that by fashioning an upstairs dressing room from a niche that once served as a sewing room. He added a cedar-lined closet, clothing racks, a copper sink and a vanity bathed in warm light.

He applied his upholstery know-how to make valances and curtains for nearly every room. You can see some of his handiwork from the street — curtains wrought from outdoor fabric, tied back in swags against the tapered porch columns.

The deep porch, punctuated with plants, is an appropriate bookend for the greenhouse in back. Beneath the overhang, foliage mingles with ceiling fans; Adirondack chairs that Walker made after disassembling and tracing a friend’s comfortable chairs (“I’ve always been handy”); and outdoor rugs from home-improvement stores.

Like many deft designers, he combines budget-friendly pieces with custom work. He and faux painter Jason Gammon, of Danville, Virginia, were scraping scaly white paint from the porch ceiling when they stepped back to admire the emerging pattern: the paint was sticking to parts of the heart pine. They decided to let it be, adding only light blue milk paint between the boards. The result is an artful sky over visitors’ heads.

“This is the best entertaining porch in the world,” says Walker.

He hired Gammon again to tone the pine paneling in the greenhouse office. Gammon brushed on similar hues: creams, blues and browns. Where the paneling stops, at the 9-foot mark, the walls turn to azure. The paneling picks up again at the ceiling, this time with a deeper blue tint.

Contractor Shaver did a command performance with the office, too. He’d already worked for Walker, constructing a 50-foot arbor, now heavy with Lady Banks roses, akebia and grape vines, to serve as a living fence between Walker’s home and a house that he rents via Airbnb.
Walker has a keen interest in preserving the homes and property values along his street. A
UNCG water tank is visible from his backyard. The university and developers have approached him and others about buying their homes. One day, Walker says, they’ll sell, but in the meantime, homeowners for three blocks have lawyered up and banded together as the Mayflower Area Neighborhood Association. They’ll hold out en masse for the best deal possible, he says. As a result more homeowners are sprucing up their properties because they know they won’t be stuck with a domestic island in a sea of development.

“We have this great little slice of neighborhood that we’re trying hard to keep together,” he says. “In this case, there’s strength as well as potential profit in banding together.”

At the heart of the union are Walker’s home and, now, greenhouse office.

“It just has a good aura,” he says. “I have friends who are much more ethereal than me, and they say this house has good energy.”  OH 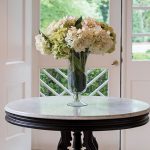 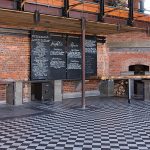 Your New Cadillac Has ArrivedOctober 2017