Debuting a Culture to America

Sachi Dely steps back from one of her favorite paintings, Refuge, and reflects on the toddler girl on a cotton candy-colored background. A blossoming red flower covers the girl’s mouth, and her face and neck are entwined with plant roots that creep toward her eyes. A small red bird perches on the toddler’s left shoulder, picking at one of the roots on her neck; another flies backwards as it tugs a worm out of the girl’s right ear.

“It was basically about my experience as a refugee,” says Dely, 23. “The birds are taking refuge within me.”

Since her sophomore year at Guilford College, Dely has used her art to explore her involuntary exit from the Highlands of Vietnam as a 1-year-old. Her works focus on Montagnards, indigenous people from areas mainly within Vietnam’s borders, and how she and they are adapting to Western culture.

“There’s the indigenous art they brought with them, but here in their new country there is no tradition of Montagnard-American art,” says Andrew Young, Dely’s mentor and a volunteer training coordinator for Guilford’s Bonner Center for Community Service & Learning. “She is embarking on something that has no real background or history.”

Dely describes the Montagnard struggle for a place in the world as similar to being “pushed under a rug. If I have the chance to let our community be known about, I’m going to do it . . . I’m proud of my culture. I’m proud of who I am. I want the world to know about us.”

Montagnards have lived in the Indochina Highlands for more than 2,000 years. For at least the last 200, both foreign colonialists and Vietnamese authorities in cities like Hanoi and Saigon have suppressed Montagnard culture and attempted to seize control of the Highlands.

A 2002 U.S. government cultural profile called the relationship between Montagnard and Vietnamese “comparable to the tension between American Indians and the mainstream population in the United States.”

The tension deepened after Montagnards aided the U.S. military during the Vietnam War. When Saigon fell to the North Vietnamese communist forces, the new government viewed the Highland tribes as enemies. That was the situation the Delys found themselves in when Sachi was born into her Montagnard Bunong tribe in 1998.

When Dely was a year and a half, some Montagnards held a peaceful protest against the Vietnamese government about the right to practice Christianity in an atheist country.

“It turned out to be very violent,” Dely says. “The Vietnamese government arrested people and put them in re-education camps. Basically, whoever they arrested, they would torture and ask, ‘Who else was there?’”

Although her family didn’t attend the demonstration, the Vietnamese government suspected her father of involvement. He fled their village soon after the protest and trekked to a refugee camp on the Cambodian border. Six months later, Dely and her mother walked for two to three days with hundreds of other Montagnards to the same camp.

“My friend remembers being under a bridge and her mom telling her to breathe quietly,” Dely says. “Above the bridge, police were looking for people who were running away.”

The Delys spent a few months there until moving to another camp in central Cambodia, uncertain of what the future held. At one point, Dely’s maternal grandfather walked from his village to Cambodia and begged Dely’s mother to return home.

“He told her there’s nothing here for you, they’re not going to do anything to you,” Dely recalls. “But there was this man who spoke English really well, and he was like ‘We’re going to America soon. Just stick it out a little longer and we’re gonna go.’”

After a year in Cambodia, the U.S. government did, in fact, grant Dely’s family refugee status. They resettled in Greensboro, as have thousands of other Montagnards beginning with 209 in 1986. 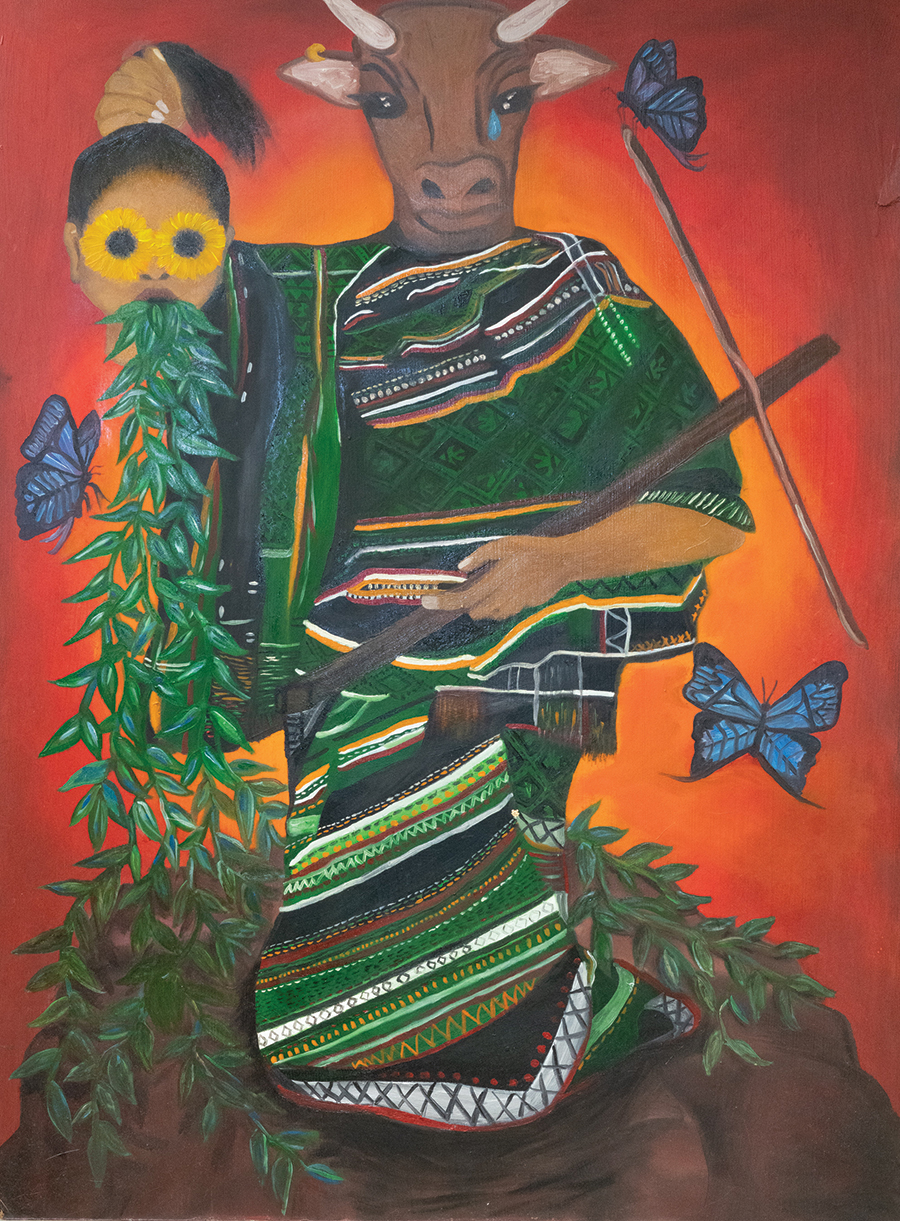 In her Greensboro art studio, Dely pulls out another painting. A woman, centered on the canvas, is wrapped in a green-patterned dress and rests a traditional Bunong bow and arrow in her left arm. The woman’s right arm is held outstretched and holds a severed head.

From the neck up, she is an ox. A tear runs down her cheek. Dely has entitled it Crying Ox.

“This was me expressing how I was feeling at the time,” she says. “Like I was just this head on this body that I didn’t understand. I didn’t really understand what it meant to be Bunong.”

Despite being raised in a tight-knit Greensboro-based Montagnard community, Dely had trouble connecting with her Bunong identity. “Growing up, I never understood myself or my culture or why I was here,” Dely says, “I got to a point where, being in a public school, I realized ‘Oh, I’m really different than most people,’”

“Because she was young [in the camps] and didn’t have all these direct memories, she was shaping her own view of who she was,” reflects Sel Mpang, Dely’s roommate and lifelong friend. Mpang and Dely were part of the same group that walked from the Vietnam Highlands to the Cambodian refugee camp. “She didn’t really talk about those experiences also because they were traumatic.”

In January 2020, Dely, her mother and her two younger siblings finally had a chance to return to their Bunong village. There, Dely reunited with aunts, uncles and grandparents who had not seen her in nearly 20 years.

“I was expecting myself to be more emotional,” she says. “I thought about it for so long and thought maybe when I get there I’ll cry and have this type of awakening.” Surprisingly, that was not the case: “It was fine. I was there, and I felt very at peace there.”

Now, Dely can reflect on Crying Ox from a different perspective. On her return, she looked at her painting and reflected, “Even though a lot of sad things have happened and there’s this whole history, at the end of the day when I was there, my family was just happy and smiling.”

One of the last paintings Dely turns to has three scenes. In the top right part of the canvas, a North Carolina neighborhood of shingled-roofed houses glow under a moonlit sky. In the top left, an orange-tinted sun lights up Saigon skyscrapers. The dividing point between the two settings is transformed as it runs down the image. It changes from a line into a river that flows through the painting’s final section, a village in the Highlands. Dely calls it Home.

Home is being used as a poster to promote Fighting for Family, a documentary about a Montagnard refugee who was deported by U.S. Immigration and Customs Enforcement to Vietnam without his family.

“The idea came from them being so far from each other,” Dely says. “They’re using my prints to sell to help raise money for the family.”

Catherine Panter-Brick, an anthropologist and expert on resilience, once said, “What matters to resilience is a sense of hope that life does indeed make sense, despite chaos, brutality, stress, worry or despair.” For Dely, that sense of hope comes from her creative expression and how it can help her community.

“My purpose in life is to be creative and to pull my culture and my ethnic group out into the public,” she says. “I also think it’s to be a teacher . . . teaching about my culture, teaching about creativity, incorporating both, and being more than what the Western eye sees us to be.”  OH

Allen Siegler is a freelance journalist based in Chapel Hill, North Carolina. His works have appeared in Indy Week, North Carolina Health News and The San Diego Union-Tribune.