A wave of bold color transforms a Burlington kitchen 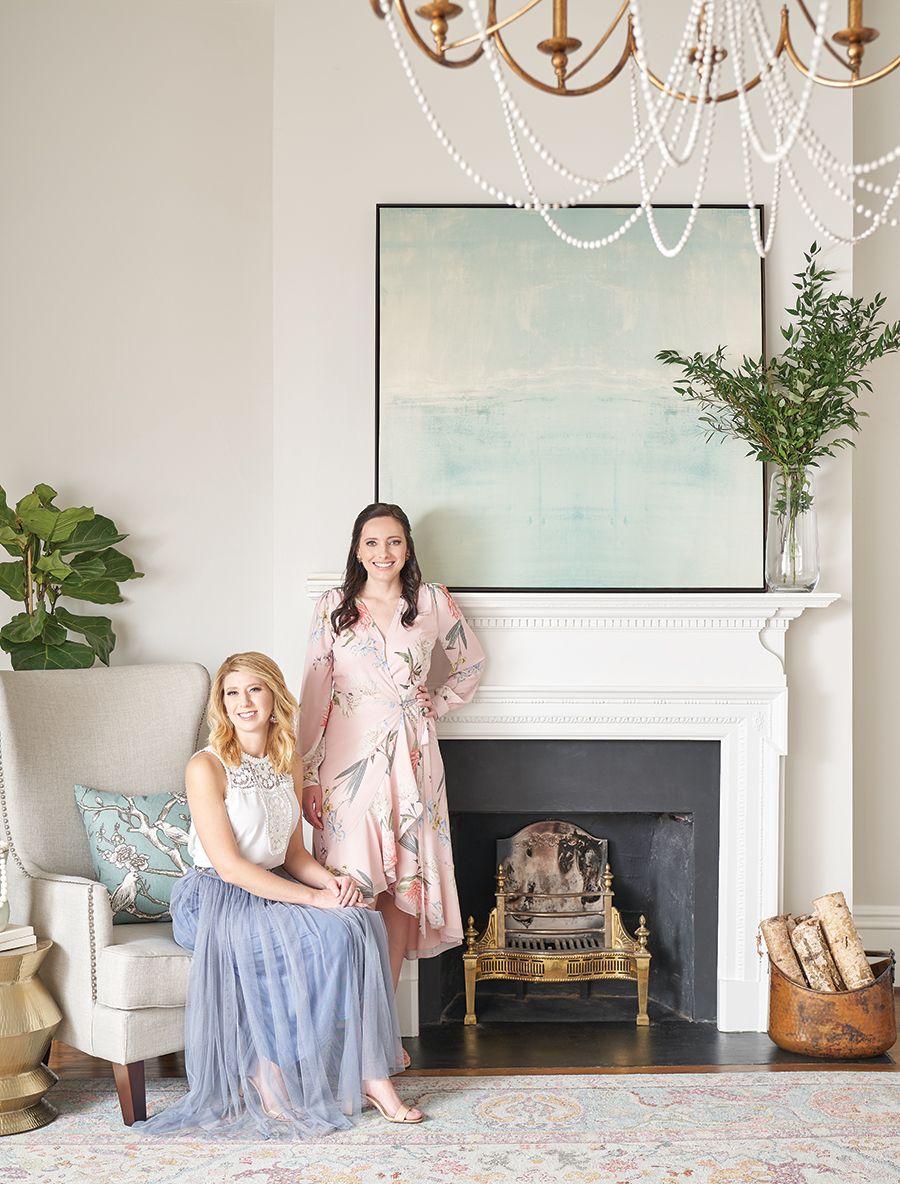 Their nest may be empty, and roomy for two, but Allison and Eddie Gant are staying put.

Even though their children are grown and gone, the Gants — he’s 58, she’s 55 — plan to remain in their two-story brick Colonial home in west Burlington.

Their reasons are many — architectural, emotional, financial, logistical.

Their master bedroom is on the first floor, a layout conducive to aging in place.

Their home, which they’ve occupied since 1999, holds treasured memories of their children, Olivia and Edmund, growing up there. 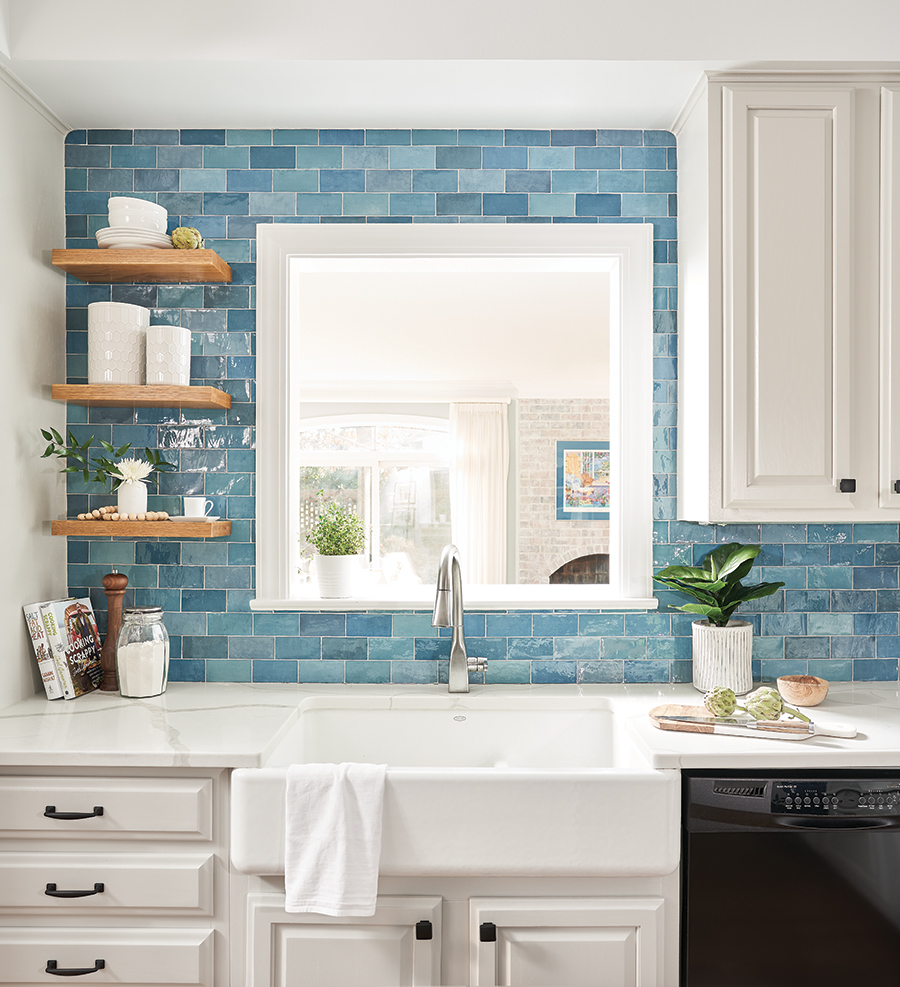 The location is convenient to other family members; Eddie’s parents and Allison’s siblings live nearby.

The 3,800-square-foot residence is paid for.

And not least of all, the Gants are attached to the place they’ve lavished with love and work for the last 20 years.

“This house really reflects who I am with the design and the decorating,” says Allison, a professional dance instructor who serves as chairwoman of the Alamance-Burlington Board of Education.

Eddie works for Shawmut Corp., which bought part of Glen Raven Inc., the textile company founded by Eddie’s family. Eddie still sits on the Glen Raven board of directors, and he and Allison are active in church and civic organizations. They’re deeply entrenched in their community, and in their home, where they love to entertain.

But just because they’re sticking around doesn’t mean they want their home to stay stuck in time. 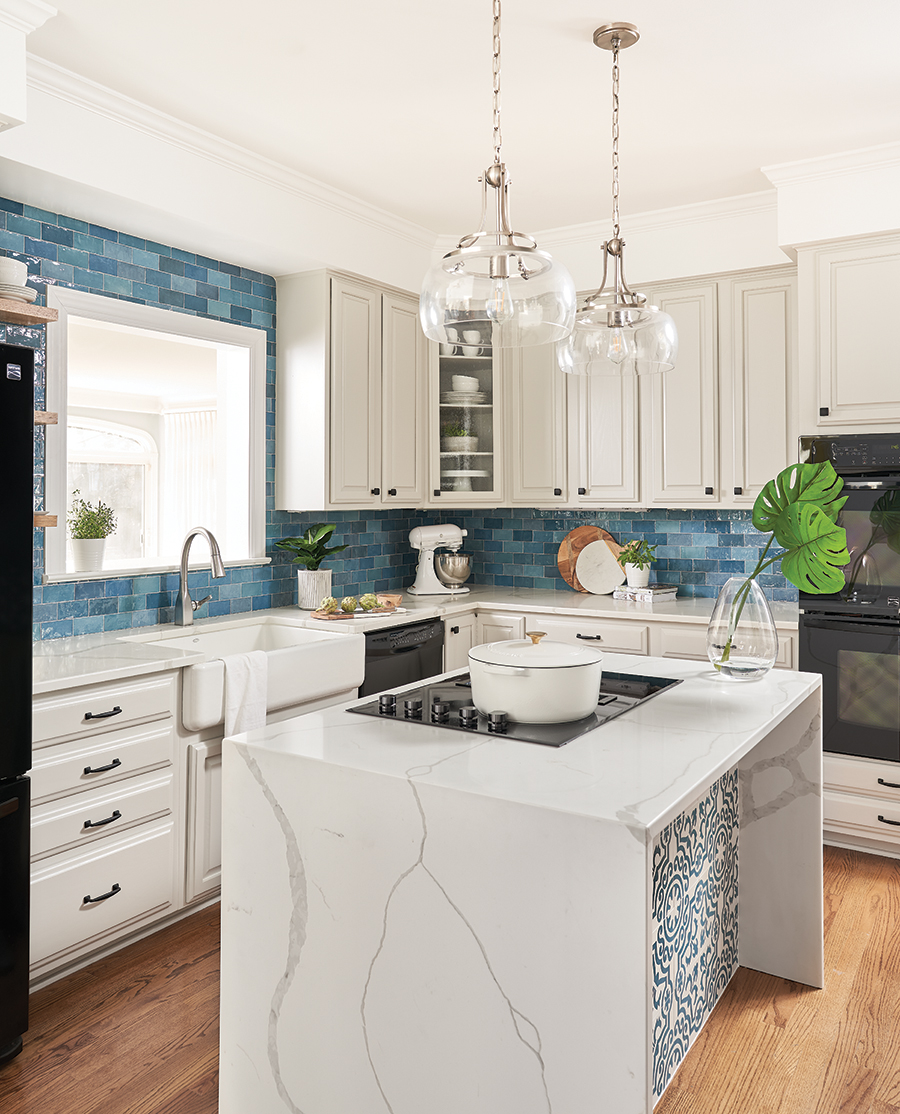 Room by room, they’ve been updating upholstery, paint, hardware and accessories over the last several years.

Last summer, they focused on the kitchen, which they’d spruced up 10 years before.

“It was just really tired and ready for a complete refresh,” says Allison. “I wanted to bring it into the 21st century.”

To help, she called in Emma Legg and Sydney Foley of Greensboro’s Kindred Interior Studios. The duo, both 32, became friends when they were interior design students at High Point University. Each worked for other design shops before joining forces.

They’d helped the Gants with smaller projects, and the Gants liked the way the young designers understood and applied their tastes.

Emma and Sydney believed they could continue to capture the couple’s essence, especially Allison’s love of boisterous colors.

As for her husband, Allison says, “He’s gracious enough to live with what I choose.”

For this project, Allison picked a bright teal backsplash that leaps out against newly pale cabinets and walls.

The old backsplash, done with 1-inch tile squares, contained some teal accents, along with nips of brown to tie into brown granite counters, but it packed nothing like the aquamarine punch of the new backsplash, which comprises several shades of the color.

“You have your showstoppers,” explains designer Emma, alluding to the new turquoise wall and an island that repeats the color. “In order for those to shine, we kept everything else neutral.” 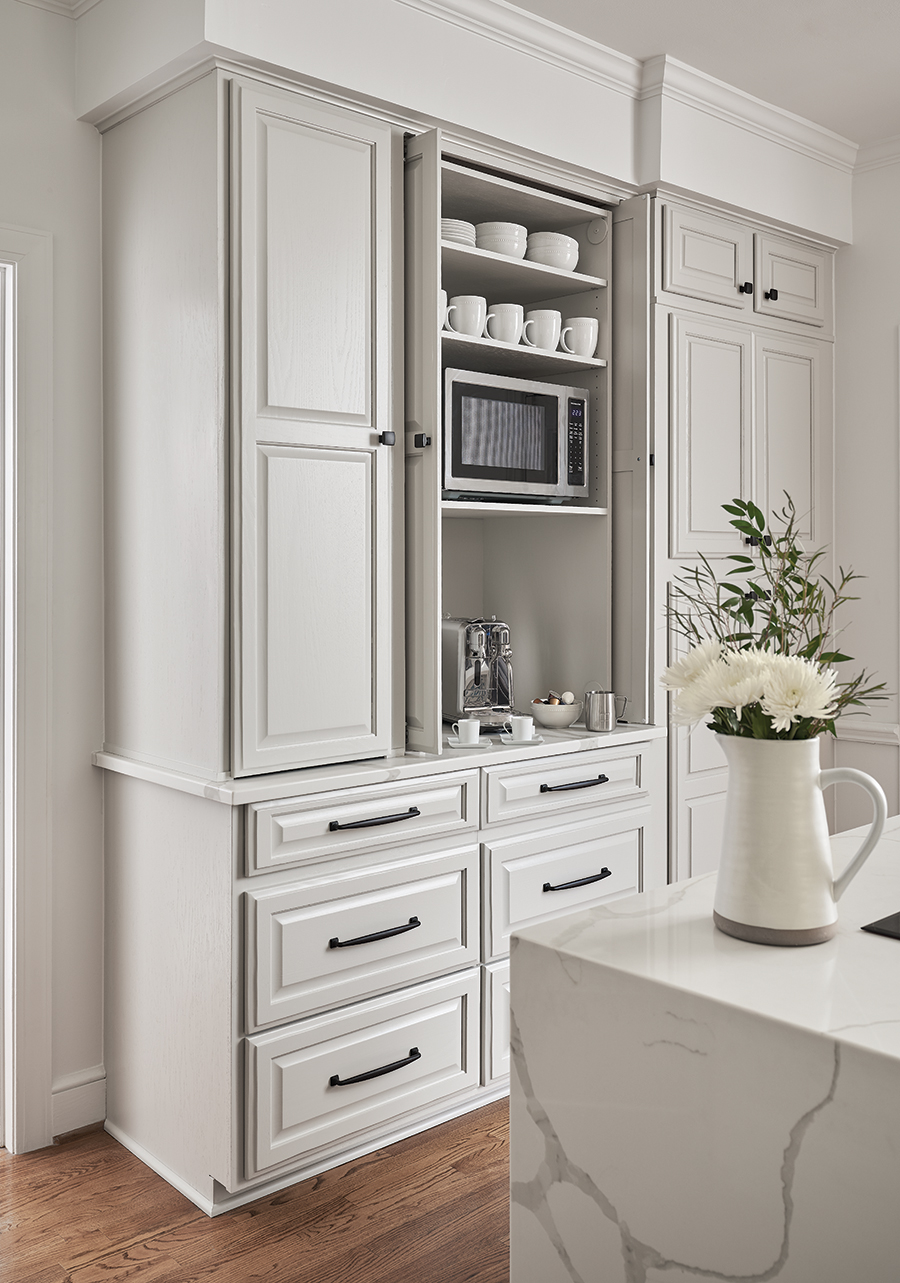 To stay within the budget, all parties agreed they would stick with the kitchen’s L-shaped footprint — no walls would be added or removed — and they chose to preserve the cabinet boxes, as well as the island.

They also agreed not to change the location of lighting fixtures.

“There was some construction, but it was minimal,” says Emma. “It was in between a cosmetic and gutted-to-the-studs renovation.”

The upgrade was managed by general contractor Kevin Reeves of J&K Builders of NC, based in High Point. The renovation involved a cabinetmaker building an “appliance garage” around what had been a catch-all desk incorporated into a wall of light brown cabinetry.

The “mom desk,” as Sydney calls it, was original to the 1988 home. It served as a workbench for the tools of family life: mail, papers, purses, pens and Allison’s Rolodex. An original NuTone intercom and radio system was set into the wall above the desk.

Out came the intercom and the desk. In went a new cabinet with doors to conceal the coffeemaker, microwave and other small appliances that once populated the countertops.

“At the end of the day, you can close the doors, and it’s a nice, clean look,” says Emma.

Cabinetmaker Andrew Bereznak routed the new doors to match the existing cabinets. All of the cabinetry, new and old, was painted a faint gray.

The old hinges, which had been visible from the outside, were replaced by hidden hinges.

A built-in corner cabinet, once fronted by a door that framed a colored glass tulip, got a new pane of clear seeded glass, flecked with bubbles, so Allison’s collection of pottery, china and cheerful barware would show. 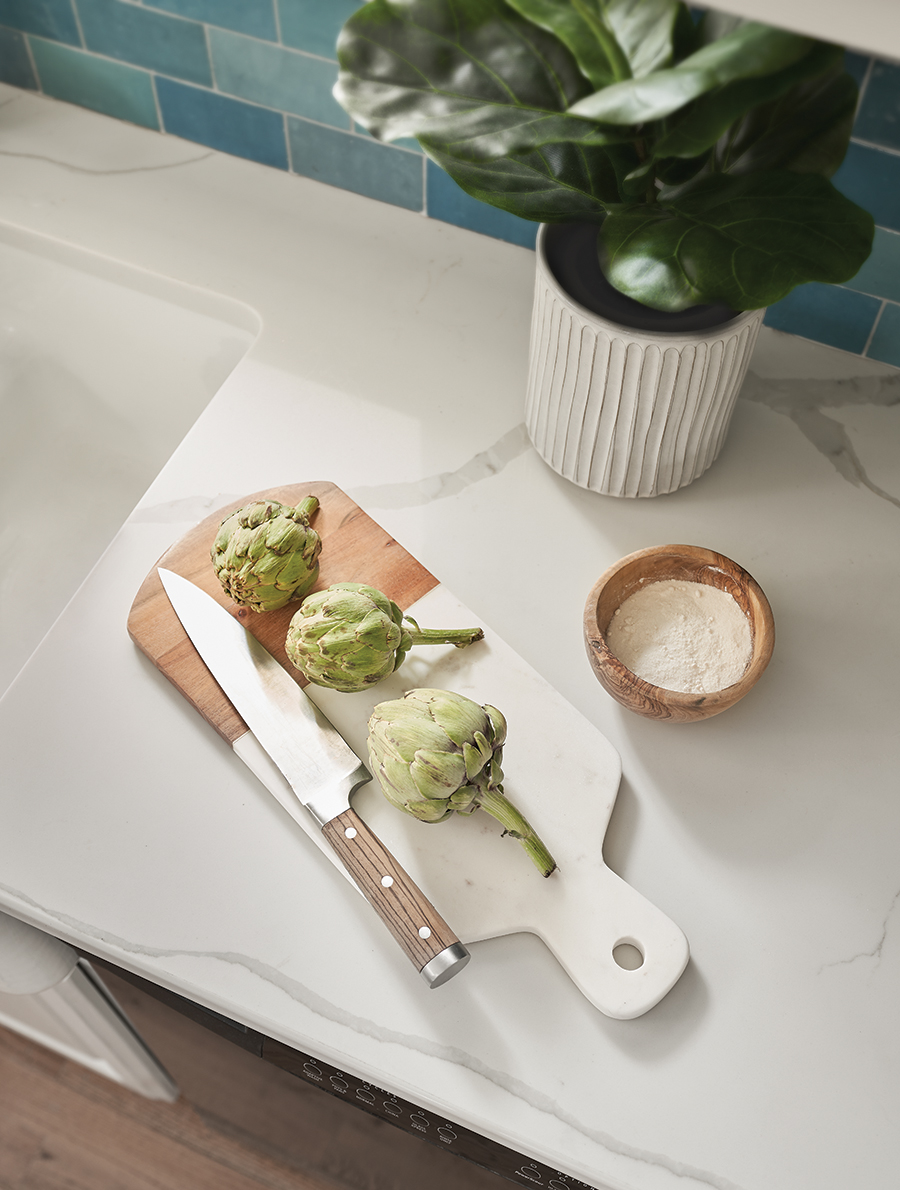 Above the kitchen sink, a curved wooden valance disappeared so the glossy teal backsplash — subway tile from Studio Tile & Design in Greensboro — could be extended above a window.

To create more interest on that wall, contractors installed floating shelves with a finish resembling the room’s oak hardwood floors.

The former bisque-colored, under-mount sink was booted for a white porcelain farmhouse sink with a deep apron.

Brown granite countertops — installed during the last remodeling — were tossed in favor of milky, veined quartz with an eased edge.

The same white quartz, from Greensboro’s Ivey Lane, tops the island and spills over two sides of the box, creating a waterfall effect. For the front-facing side of the island, Allison chose custom tile from the online store Cement Tile Shop. The patterned tile, painted in teal on a white background, flirts with the bold backsplash. Emma and Sydney suggested the design to spice things up.

“That’s not anything I would have thought to do,” says homeowner Allison.

To harmonize with the appliances, cabinet doors and drawers received matte black knobs and pulls.

Emma and Sydney recommended changing the color of the kitchen walls from light bluish-gray to white, a clean backdrop for the tidal wave of teal and other smacks of color, including Allison’s plucky kitchen rugs.

“My pink, yellow and blue rugs are very happy,” she says.

The restful whites also give plenty of elbow room to the bar stools that usually sit at the island. The stools are covered with hot pink leather and silver nail heads.

The Gants are so tickled with the outcome of the kitchen, they’ve hired Emma and Sydney to juice up the home’s exterior with new lighting, a wrought-iron hand rail and deeper navy blue shutters.

“They know my taste,” says Allison. “It’s definitely been a collaboration.” OH