Minus social dates, many folks updated their digs
during COVID-19 closures

Every time one door closes during a pandemic, another door opens at a paint store.

For many homeowners, the combination of spare time, bored children and a $1,200 stimulus payout from the feds has led to a serious outbreak of home-and-garden projects.

Several of our readers took the opportunity to zhuzh their surroundings — maybe because things you can tolerate during the normal sprint of life make you go ARRRGHHH! during a lockdown.

But as these readers prove, when life gives us ARRRGHHHs, it’s possible to make them into AHHHHHs! 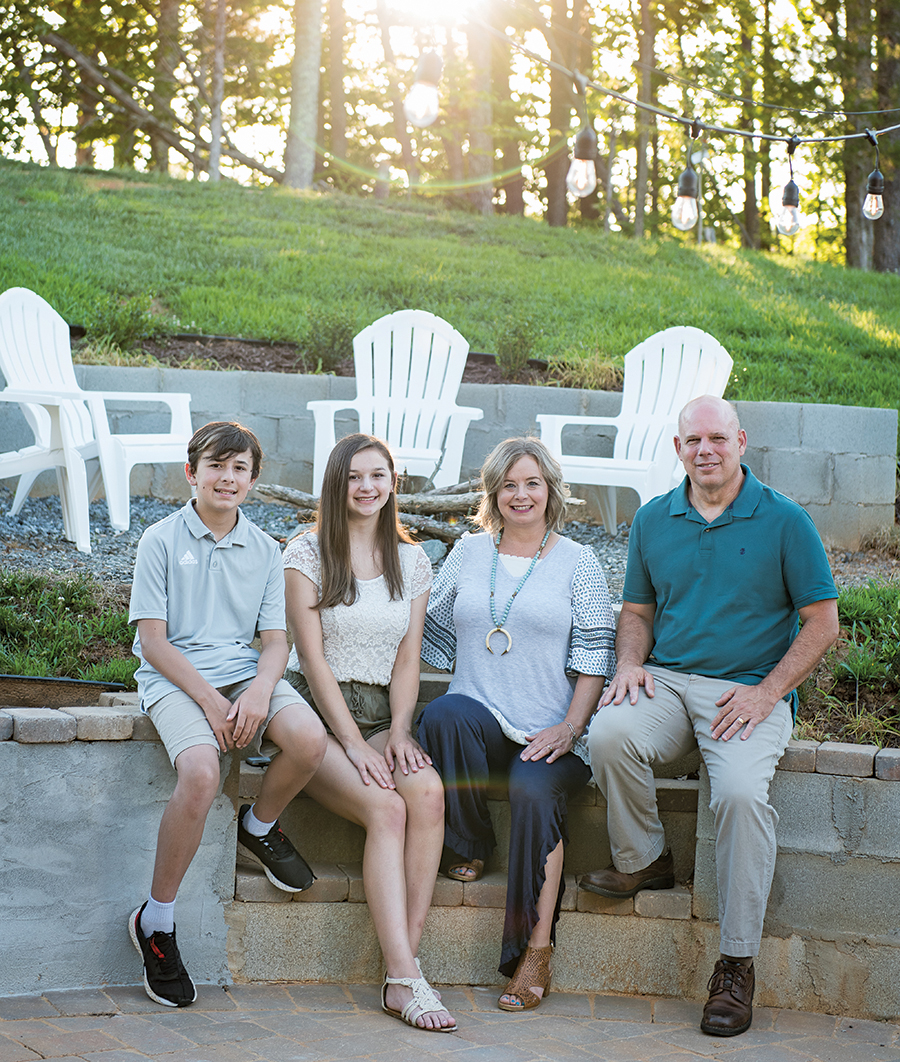 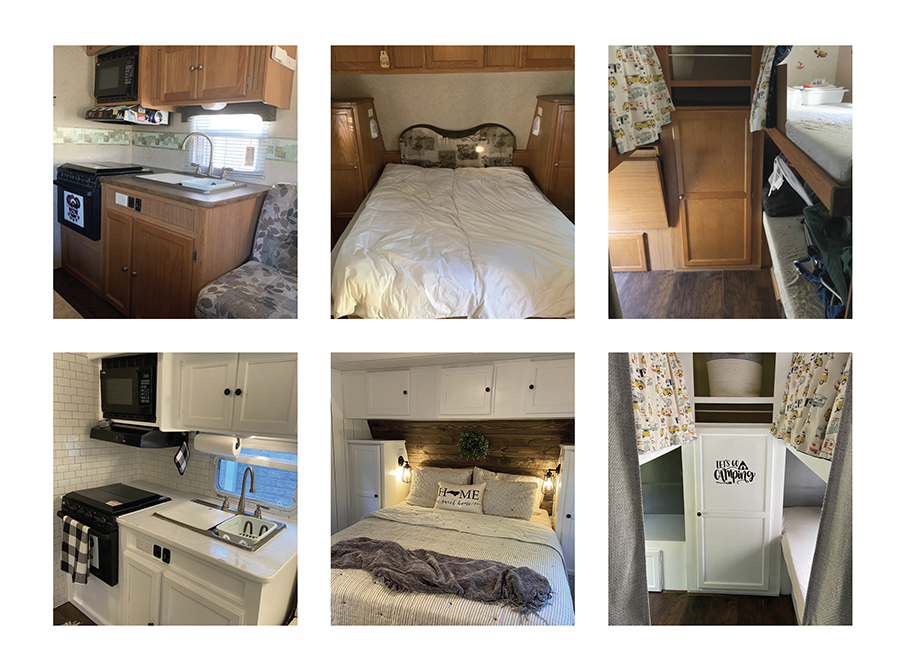 “Home is Where We Park It.”

So reads a playful decal on the refrigerator inside the Mercer family’s camper, a 2008 Trail-sport that has transported them to many beautiful places, geographically and emotionally. Deb Mercer, husband Andy, and their three kids pulled the 29-foot trailer on a tour of the United States when Andy retired from Air Force active duty in 2012.

With extra downtime this spring, Deb focused on beautifying the camper’s overwhelmingly brown interior because, as she puts it, “It was ugly when we bought it. Most campers really are.”

Guided by a blog post (“My $500 Camper Remodel That I Did All by Myself,” at proverbs31girl.com), the Mercers spent two months transforming beige blah to farmhouse fresh.

Thanks to gallons of paint and yards of peel-and-stick surfaces (vinyl hardwoods, wallpaper and countertop contact paper) plus “shiplap siding” cut from lightweight floor underlayment, and new upholstery stitched from canvas drop cloths, the kitchen perks in crisp black and white. Ditto the bathroom, now gleaming with vinyl tiles and punctuated by a turquoise cabinet.

The camper no longer appears tuckered out from its travels. Neither do its travelers, who crash on new mattresses and bedding, which means the family can once again let the good times roll. 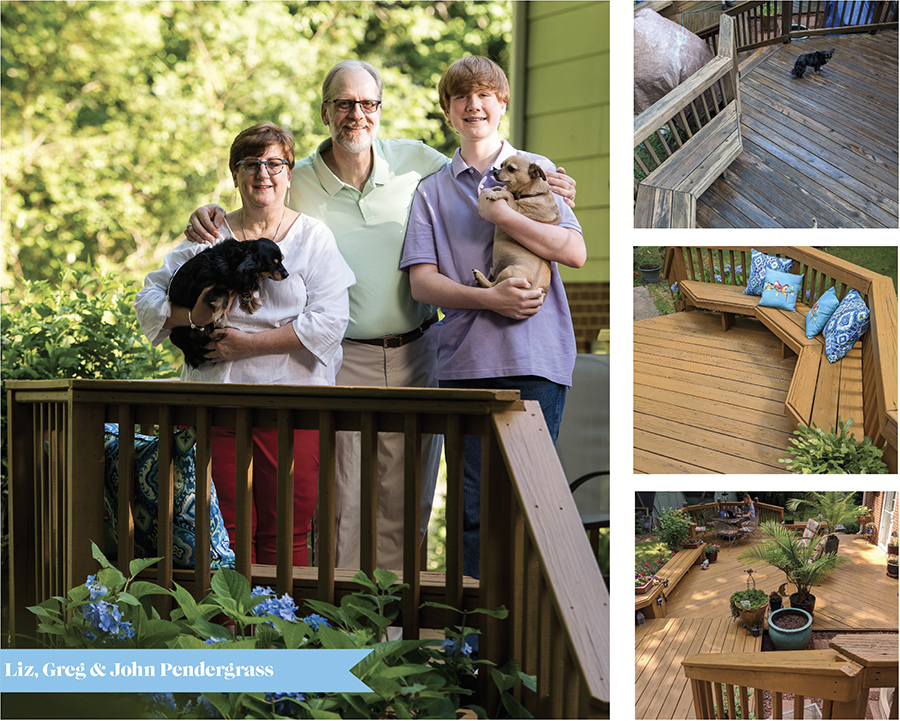 You’ve heard of lake life — the kicked-back lifestyle of people who live at water’s edge?

“We bought the house for the deck,” say Liz Pendergrass. “It’s almost the full length of the house.”

Every few years, the couple spends two weekends washing and staining the weathered boards. But COVID-19 — and its captive audience — presented another option.

When grown sons Christopher and Peter came home for little brother John’s drive-through graduation from St. Pius X Catholic School, the Pendergrasses summoned all hands on deck. Then they passed out brushes and rollers.

The weekend after John’s Thursday graduation from 8th grade, the family of five sealed the deal, working as a team to apply a new color of semi-transparent deck stain: natural cedar.

Turned out, it was orange. Really orange.

“My youngest son said, “This is like rolling on macaroni and cheese,” according to Liz, who panicked. Silently.

“It’s kind of like a woman who colors her hair a totally different color, and she looks at it and says, ‘Oh, my God, what have I done?’ Then a couple of days go by, and she says, ‘You know, I kind of like it.’”

Now, Liz loves her hair. Er, deck. It’s so much brighter than before, partly because she bought some cushions for the deck, and son Peter helped to arrange the potted plants differently. Liz especially loves the palms that decorated her church during the Easter season.

To be clear, and to keep Liz from going to “heck” for swiping palms, we should say that Liz works in the office at St. Pius X, and she waited until the plants went into the trash after church’s highest holiday. “That’s when I snatched them — and resurrected them,” she says.

New life for the palms.

New life for the deck.

And no one goes to heck. 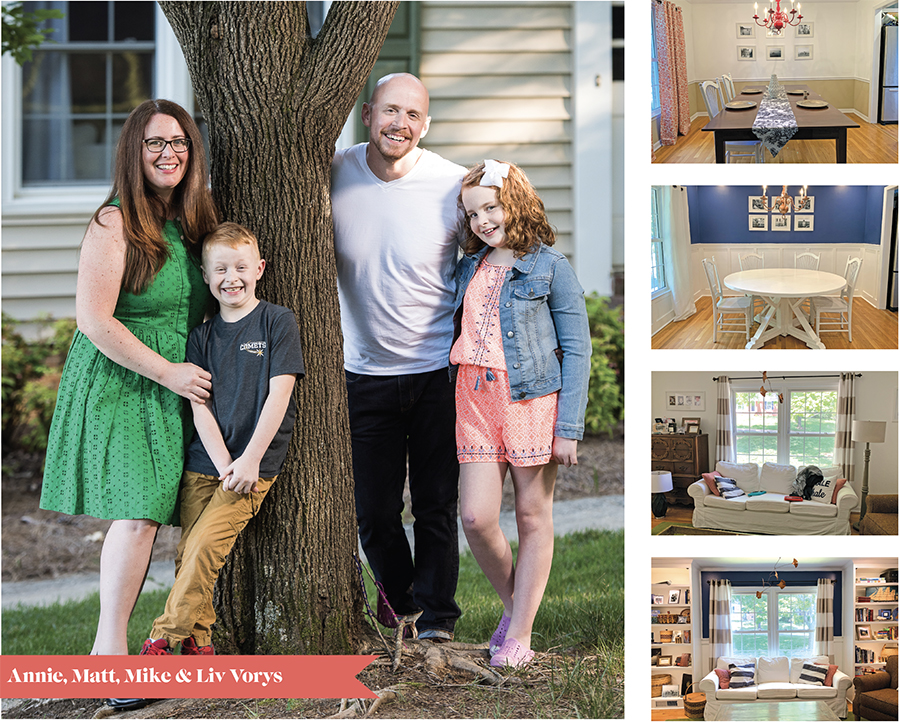 The family that stays (and stays and stays) together, renovates together.

At least that’s true in the home of Annie and Mike Vorys.

When the lockdowns snapped into place, she and Mike decided to overhaul three adjoining rooms: foyer, living room and dining room. The project became a family affair with daughter Liv, 8, and son Matt, 7, using a chop saw and nail gun (under Mike’s close supervision) to help make board-and-batten wainscoting, a new side table, two end tables and side-by-side coffee tables.

As a Mother’s Day present, Mike built a round table for the dining room. Annie’s mom scored some white grommet drapes from Goodwill. A repainted chandelier and new can lights illuminated the room’s improvements.

In the living room, Mike crafted two floor-to-ceiling bookcases with interior lighting. Annie livened all three rooms with bright blue paint, cinching the nautical feel of the project. “Our favorite place in the world is Lakeside, Ohio,” Annie says, referring to the resort community on Lake Erie. “Everything is very beachy in the house where we stay.”

Family photos and mementoes adorn the walls: a fly-fishing rod Mike’s dad made; red-and-white Boy Scout signal flags from Annie’s father; a poem penned by Annie’s late sister; and sheet music autographed by Lin-Manuel Miranda, composer of the hit musical Hamilton, a favorite of Annie and her mom.

From the living room ceiling hangs a mobile of ginkgo leaves by Greensboro sculptor Jay Jones, reminding Annie and Mike of their son Carpenter, who died at birth in 2012. The hospital put ginkgo leaf symbols on the doors of bereaved families as a sign of strength, peace and hope.

“We took things that reminded us of the most important people in our lives and put them up,” Annie says. 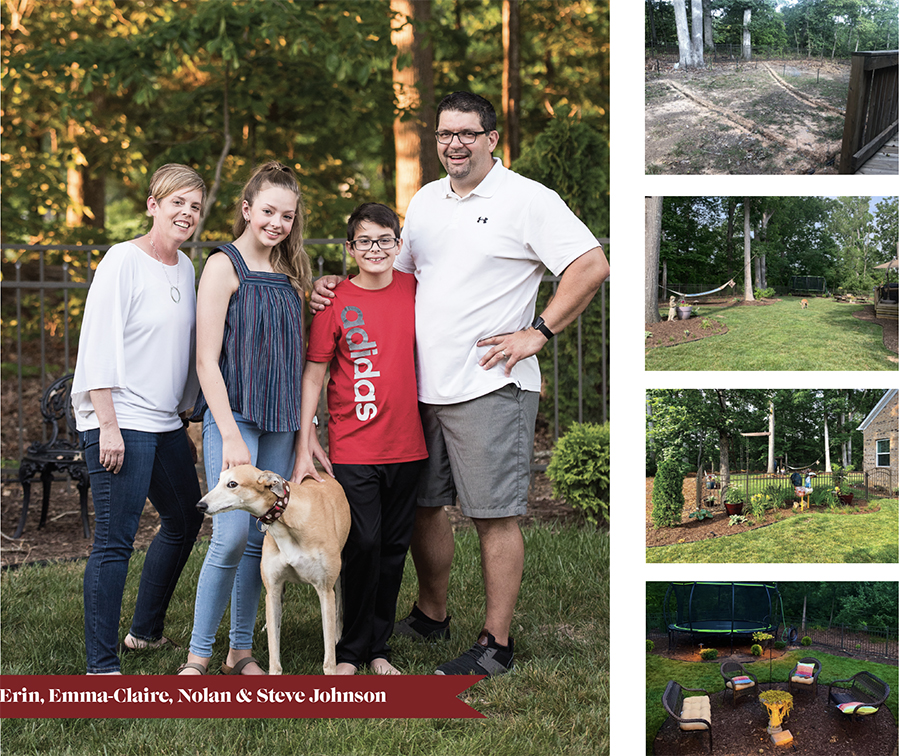 Around Christmas, architect Steve Johnson drew up plans for several backyard projects that he and his wife, Erin, figured would take a year to complete.

Then came a pandemic, and suddenly the Johnson family was awash in time and children with no after-school plans (read: free labor).

“I looked at my wife and said, ‘Maybe it’s time to teach them how to spread mulch,’ ” says Steve, director of design and construction for Presbyterian Homes, an organization that builds and runs retirement communities.

Steve worked from home and office this spring. Arriving home mid-afternoon to relieve Erin — who was also working from home, overseeing the kids’ online schooling, and chipping away at a doctorate — Steve pulled 15-year-old Emma-Claire and 11-year-old Nolan off their Xbox, TikTok and cell phones and into the yard for a few hours of “sweat equity”.

Together, they created planting beds, tucking in flowers and shrubs plucked from local nurseries and from Erin’s parents’ yard. Steve built a beefy cedar frame for one hammock and draped another sling from frame to tree, creating a hangout duplex.

“My wife and I like to sit out there and talk in the evenings,” he says.

For the kids, he designed and built an elaborate support for a stand-on Swurfer swing. The kids lobbied for a swimming pool — motion denied — but they did score a trampoline with sprinkler attachment atop a cushy mulch pad.

The result was a private playground that the whole family can take credit for. “We’ll sit out there on the back deck, and the kids will be like, ‘You know, I remember the day we put that in,’” says Steve.  OH

Maria Johnson is a contributing editor of O.Henry. She can be reached at ohenrymaria@gmail.com