Transforming Greensboro one office — and vision — at a time

Thirty-three-year-old Dan Brown, founder of one of Greensboro’s newest start-ups, Precise 3D Scans, has just moved into a new office, and he has lots of ideas about how to make it his own.

Slide a bookcase against one wall.

Hang a couple of motivational posters.

Prop some photos of his wife and 3-year-old son on his laminate desk, which came with the space, along with an ergonomically correct chair. 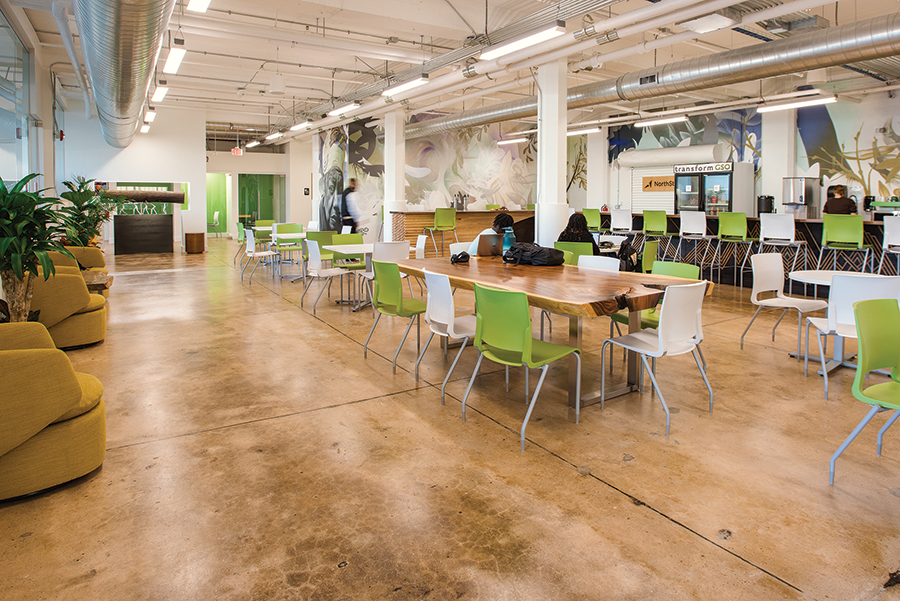 There isn’t room for much more. The space is roughly 6-by-7 feet and industrially chic with bright white walls, concrete floors and fluorescent lights overhead. But at this stage, Brown, who started his one-man business in the spring of 2020 — yes, that spring — doesn’t need much more, aesthetically speaking.

What he does require is an affordable place to work outside of his home, a place where he can drill down, for about 10 hours a day, in his specialty: making 3D virtual tours of apartments, stores, schools and the like. At the moment, his MacBook Air is propped open, next to a couple of crinkly plastic water bottles and his earbud box. He’s fine-tuning an interior view of the Nike House of Innovation in Paris.

Yes, that Nike. And that Paris.

Whenever he wants, he can open the glass door of his office — the wall facing the hallway is entirely glass — to mill around with other entrepreneurs, swapping small talk, pinging ideas and harvesting support as he goes.

“I’m a really social person,” Brown says, his eyes smiling over his paper mask. “But for the most part, when I’m here, I’m really siloed in. This building has been wonderful.”

A place to burrow in — as well as a place to socialize and experience “happy collisions” with people in different fields — is just what Andy Zimmerman and his business partner Ken Causey had in mind when they soft-opened a second location of Transform GSO, a co-working office space, in the trendy Southside district of downtown Greensboro in September. 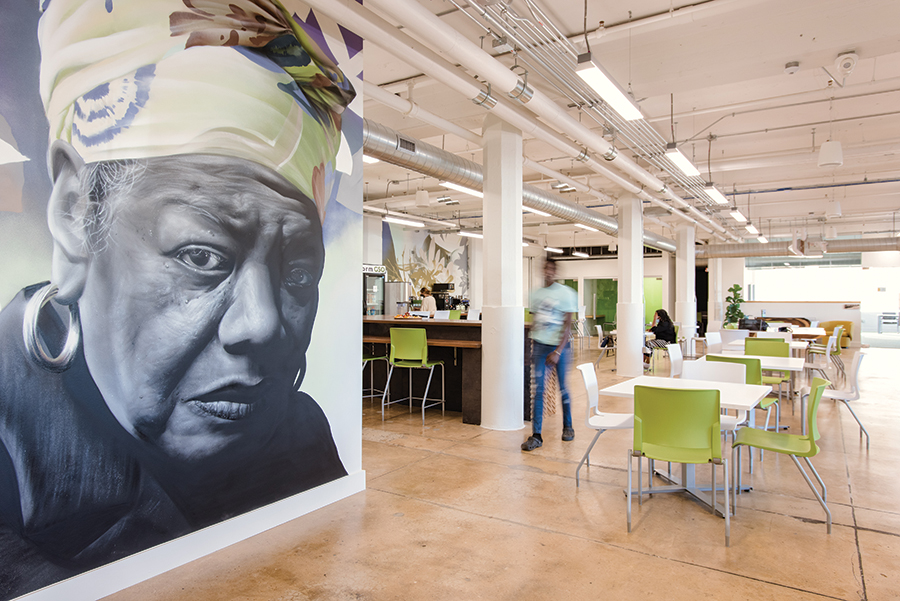 Last month, they celebrated the 22,000-square-foot expansion — inside the old Blue Bell textile mill at the corner of South Elm and Bain streets — with an official opening and more explanations of the co-working model.

“It’s kind of like a coffee shop where the coffee is free, but you pay to be here,” says Causey, Transform’s techie-in-chief.

Zimmerman continues: “A lot of co-working spaces are real estate businesses. Not that we’re not, but first and foremost, we’re a community. That’s our total drive. We wanted to create our own community of entrepreneurs.”

The latest Transform site, sporting a new entrance at 111 Bain Street, joins a smaller sister location, the former HQ Greensboro, which opened at 111 Lewis Street, one block away, in 2014.

Already, Transform on Bain has leased two-thirds of the 52 work spaces, with rents stretching from $1,550 a month for the largest rooms, suitable for five or six people, to $20 for a day pass that covers access to the common area and bottomless coffee.

Potential members can choose from nine packages, each with different perks. Leases run for 12 months versus the five-year terms that are standard for many commercial properties, and all Transform members can use the shared spaces at both sites, including a lushly landscaped area and vegetable garden maintained by the Greensboro Permaculture Guild.

O.Henry magazine recently moved its office to Transform on Bain.

Zimmerman explains the draw for many small businesses.

“The only rhyme or reason is the cool spaces, the flexibility and the collaboration,” he says. “I’m not sure there’s another place in Greensboro that has these components in a critical mass.” 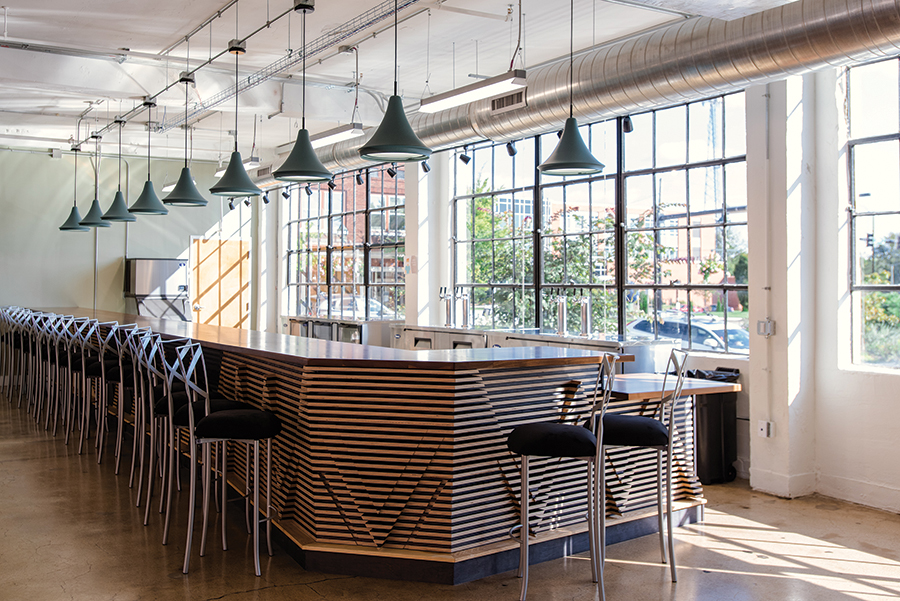 Zimmerman says it’s his favorite story: how he came to buy the 100,000-square-foot Gateway Building, an L-shaped colossus that housed the Blue Bell Co. offices and textile plant at 620 South Elm Street through most of the 20th century.

In the early 1900s, the plant wove denim and sewed it into overalls that were popular with railroaders on the nearby Southern Railway. Production shifted to military uniforms during World War II. Most of the factory workers were women.

“I know it’s not for sale, but if it ever is, I’d be interested,” said Zimmerman.

“How about now?” offered Cone.

A couple of hours later, the transaction was sealed, face-to-face, with a verbal agreement.

“We made a deal the old-fashioned way,” says Zimmerman. “We dotted the ‘i’s’ and crossed the ‘t’s’ later.”

Zimmerman added the property, which Cone had sectioned into offices and studios, to a half-dozen other parcels he owned in Southside, but there was one hitch: He wasn’t sure what to do with his new acquisition.

“Ready, fire, aim — that used to be my way,” Zimmerman says, poking gentle fun at himself.

Gradually, he and Causey decided to expand the co-working venture that was operating on Lewis street. With the help of general contractor R.P. Murray, they ripped out drywall and low ceilings, uncovered 55-pane factory windows that had been blocked by bricks or concrete blocks, and installed new electrical, HVAC, plumbing and motion-sensitive lighting systems.

The first stage of the makeover, inside the brick wing that faces South Elm Street, opened in 2019. Centric Brands, a New York-based designer of clothing and accessories, moved in.

The rest of the Gateway Building — including the stucco-clad leg that houses the common area of Transform and all of a wedding and corporate event space called Elm & Bain — was delayed by COVID and finally brought online in September. 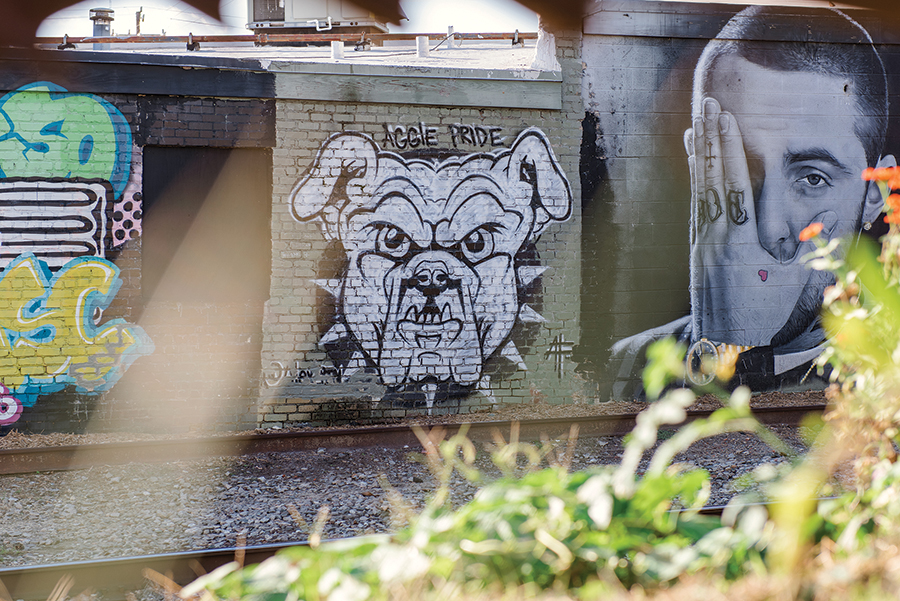 “I personally have graduated from standing shoulder-to-shoulder to listen to live music,” he says.

Zimmerman also plans to develop 240 apartment units across Gate City Boulevard with parking to support both the apartments and the Gateway/Transform complex.

“We’re breaking down the silos that have existed here in Greensboro for a long time, hopefully with The Gateway and Transform Greensboro being at the heart,” Zimmerman says.

No one would wish a pandemic on anyone, but COVID-19 hasn’t hurt his team’s dream.

“The demand for remote employment has gone up so much,” says Transform GSO’s executive director Kaitlin Conover. “We’re having a lot of people coming in because they’ve been working from home. This gives them a break, a respite.”

That’s the case for Dan Brown, the 3D entrepreneur.

He started his business last year, soon after he and his wife, Madeline, moved from New Jersey to Greensboro for her job in the office of student retention at N.C. A&T. When COVID hit, both of them were working from home, occasionally with Madeline’s mother trying to babysit their son in the background. 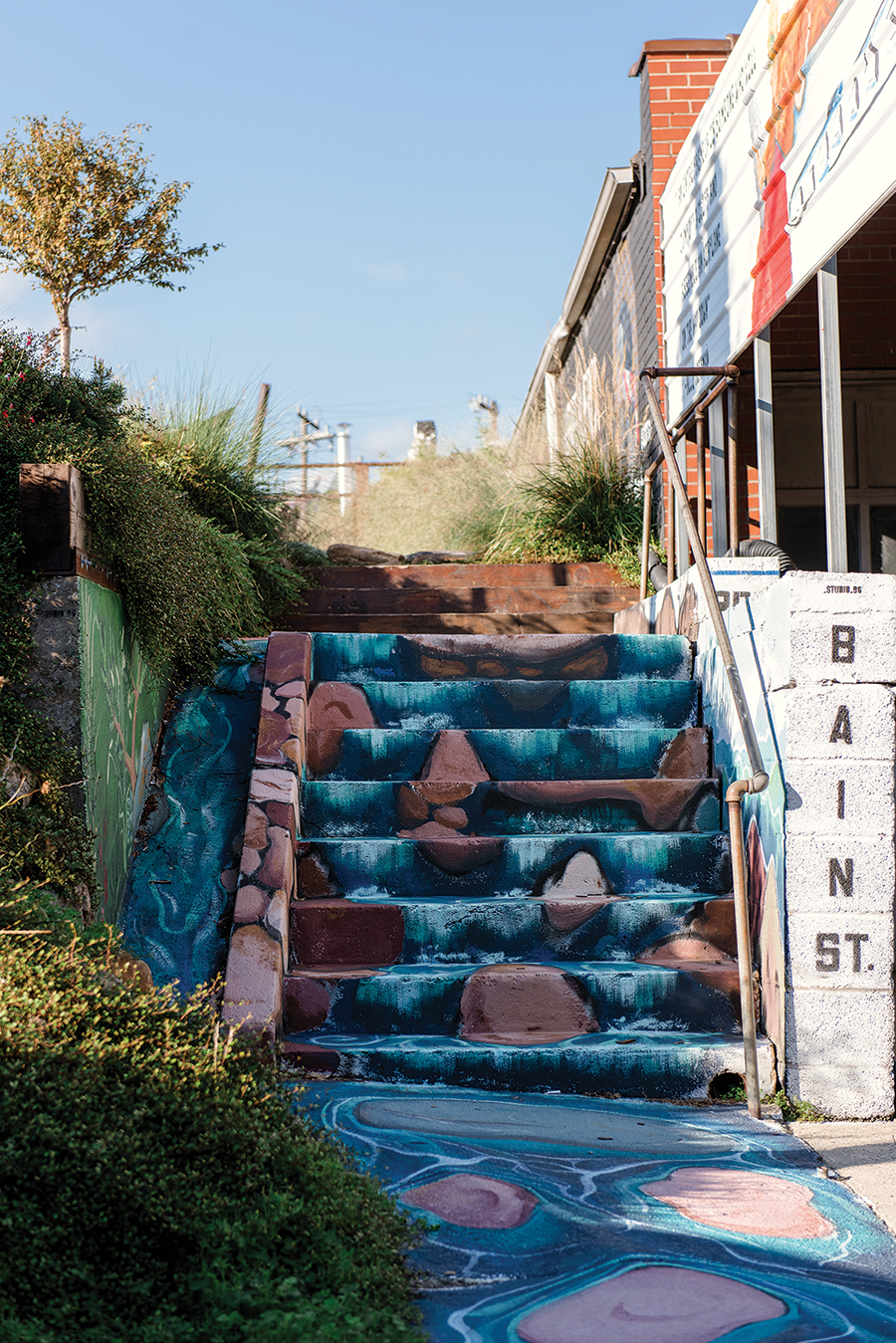 In June 2020, Brown started camping out at the Greene Street office of Collab, a hatchery for entrepreneurs fostered by Launch Greensboro, an arm of the Greensboro Chamber of Commerce.

“It was one of the best moves I’ve ever made, especially for the networking and connecting,” he says.

When Launch Greensboro moved into the new location of Transform GSO, a dozen Collab inhabitants, including Brown, followed.

“The whole ecosystem — it’s been a continuation of the excellence I’ve experienced from day one,” says Brown. “I’m grateful to have a space to work out of. I like to get out of the house and go somewhere. I’m an extremely routine-oriented guy.”

To that end, he’s adding one more item to his list of office decorations: frosted peel-and-stick window film to cover the glass door of his stall and make the space more private.

Maria Johnson is a contributing editor of O.Henry. Email her at ohenrymaria@gmail.com.