To remodel or not to remodel? Given the choice of living through a complete kitchen overhaul or walking on shards of glass, many homeowners would choose the latter. But if you’re running your own business, raising children, and you like to cook, at some point, you just have to take the plunge. Ginger Ayadogdu (pronounced “EYE-uh-doh-doh”) didn’t waste any time shortly after she and her husband, Giorgio, and their three children moved into their Oak Ridge home. “The kitchen had a dark countertop, a huge island with only two barstools and a tiny refrigerator,” Ginger recalls. In addition, the wood-stained cabinetry was dark and a bit dated, and the breakfast area was separated from the aforementioned island. “There was no flow,” Ginger says. She needed something more functional. 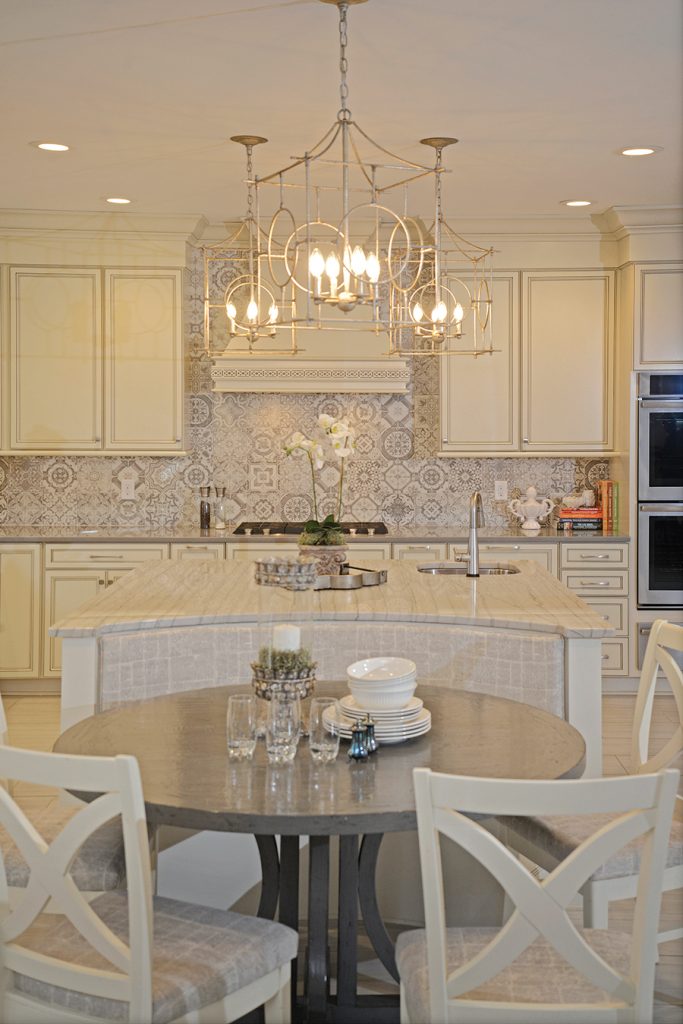 Especially considering her full days as co-owner along with her husband, of Simply Southern, a national wholesaler of T-shirts, hats, bags and an assortment of gifts — key fobs, lanyards, cupholders, phone sleeves and the like. The business started in 2005 as a modest kiosk at Four Seasons Town Centre, where Ginger and Giorgio sold “instant gratification” gifts — items like T-shirts, mugs, and such, almost inevitably imprinted with a customer’s photograph. The operation expanded to a chain of stores, Dazzle Up, in area shopping centers, and by 2010, the Ayadogdus decided to “cut out the middleman” and produce their own T-shirts. Emblazoned with colorful, whimsical designs and taglines — (“Living the Mom Life,” “My Y’all Is Authentic,” “Suck it Up, Buttercup,”) — the gear is popular at vacation destinations, particularly the beach, “our ultimate destination spot,” says Ginger. “It’s like, ‘Aaaaah!’ You can relax,” she adds. With the obvious exception of recent hurricane victims, she maintains “there aren’t many people [for whom] the beach isn’t a happy place.

She desired a similar sort of clarity, and lightness and brightness from her surroundings at home, not only in the kitchen, but also in the adjoining den and dining room. But how to effect that relaxed, open coastal vibe without replicating the bright palette so prevalent in the merchandise from the  Ayadogdus’s workaday world? The answer, as it turns out, was right in the family’s own backyard: Maria Adams of Maria Adams Designs was a sponsor of Oak Ridge Elementary School, which the Ayadogdu children attended. “Who better than someone local and someone you know?” Ginger posits. “Her vision was like mine. She was very open about what she wanted this to be — and open to our suggestions.” 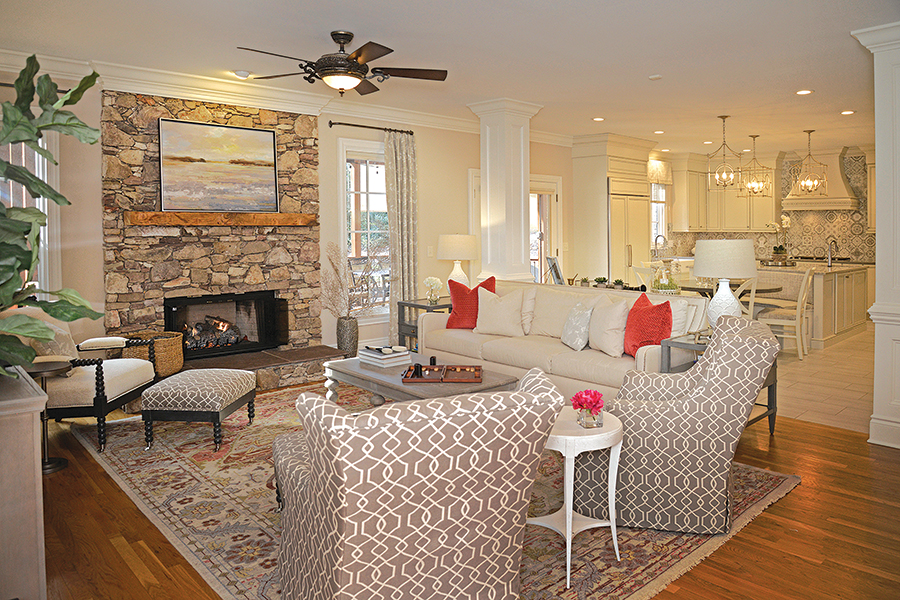 “Function was first,” Adams says, reiterating Ginger’s concerns about the kitchen’s lack of flow. Her solution? “I designed an island to include a banquette in one piece,” she explains. She went with a white color scheme (actually a tone called “linen” with a gray wash) to create airiness in the space, which, given the deck just beyond the back door, appears larger. Ginger had hoped to repaint the old cabinets, but new cabinetry fashioned by Marsh Kitchens turned out to be “a better long-term solution,” Adams says, in part because she was able to create yet more illusion of space by extending them all the way to the ceiling, and because new cabinetry provided her client with better storage. Indeed, the culinary-minded Ginger is delighted with a pull-out drawer for spices, another for utensils, and yet another for the all-important Kitchen-Aid. As for managing during the construction phase, “We have a microwave and a hot plate in the basement,” Ginger shrugs. “It was winter.” (February 2017, after the company’s busy holiday season). “Soup and pasta are pretty easy,” she says with a laugh.

For all its functionality, the kitchen has some pleasing aesthetic touches: A few geometric chandeliers sans glass panels hang over the new island, which is topped with Macaubas quartzite that has a linear pattern, and is framed with Cambria quartz in solid gray. The showstopper is the backsplash with an interlacing design. “It’s ceramic tile but it looks hand-painted,” Adams says, pointing out the 15 different designs in the tiles, each placed in such a way so as to look random. “Since the kitchen is so neutral, the backsplash is where we gave it some ‘wow,’ taking it behind the hood to the ceiling,” she adds. 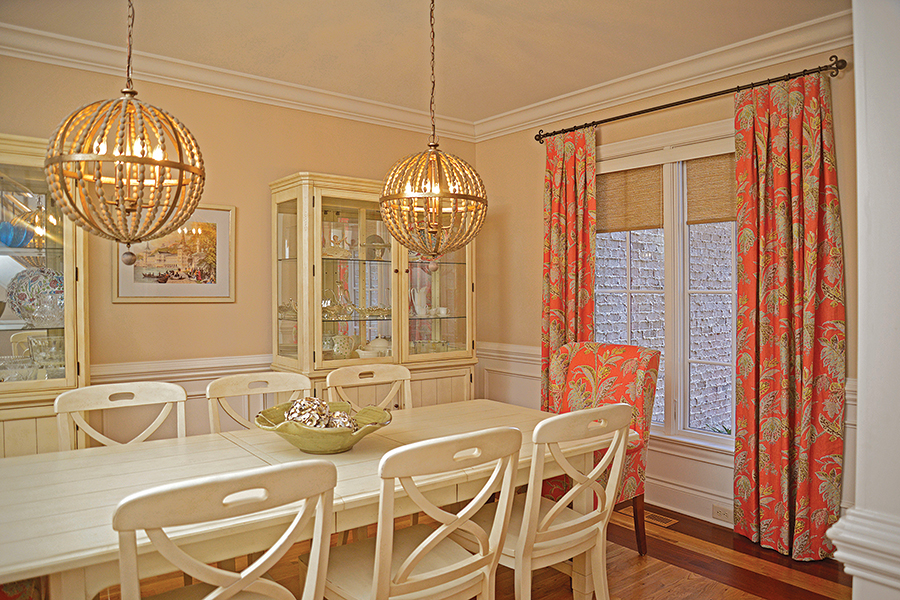 She picked up the neutral tones in the tile and wood floor extending into the open floor plan that includes a den, where as Ginger notes, Adams “blended grays and browns” that echo the shades in the stone fireplace. But first, the designer consigned the dark blue sofa and chairs to the basement. As a focal point, she chose an area rug, “with pretty shades of blue, raspberry and cream that added color, but not too much,” and continued the reddish-pink hue in some throw pillows that added more pop to the new, gray-and-white furnishings. Gray and white for a family with three children ages 13, 11 and 8? “They’re covered in a performance fabric, which is very kid-friendly and resistant to spills,” Adams says, acknowledging the necessity of designing for “real lives, real spaces and real messes.” A point that Ginger reiterates. “We’re in there every evening,” she says. “Family time is very important.” And the beach is never far away: As a final touch, Adams replaced the print over the mantel with a soft seascape in similar neutral tones.

The coast — and family — are themes that echo in the adjoining dining room, as well. Using existing pieces — a table, chairs and a cabinet with glass doors — Adams made some simple changes by replacing two captain’s chairs with upholstered ones in a coral-and-white print that she repeated in the window treatments. “It feels like a casual room,” she says. “The coral really warms it up,” as do her signature light fixtures: two round chandeliers that cast a soft glow throughout. Her other suggestion was to replace a console with another cabinet identical to the existing one. Standing side by side, they give the room balance and symmetry. And, they allow for a bit of personal expression. “I’m more of a minimalist in terms of knick-knacks,” says Ginger, but she enjoys displaying some Turkish porcelain, from her husband Giorgio’s family, handed down through the generations. “Some of it was in the drawers of the console,” Adams recalls. “I said, ‘This needs to be displayed.’” Alongside the pieces are other “old different things you don’t see every day that I picked up,” Ginger says, pointing out a vintage honeycombed plate (used for actual honeycombs) and a pancake batter pitcher. Placed between the two china cabinets is yet another reminder of Giorgio’s family: a print of a Turkish landscape he picked up during his travels. Adams had it reframed “to give it a home and remind the family of their Turkish heritage.”

Family and function come together in this happiest of places, with its seamless backdrop of soft neutrals, punctuated with the occasional bursts of color  . . . like rare shells washed upon a sandy beach with the ebb and flow of the tide. OH