The Most Revealing Month

Savoring the bittersweet fruits of November

For a number of reasons, I call November the Most Revealing Month.

The outdoorsman in me loves the soulful sight of November’s bare hardwoods stripped clean of leaves, revealing nature in all her naked glory, “That time of year thou mayst in me behold,” as my fellow autumn-lover Will Shakespeare described in his 73rd sonnet, “When yellow leaves, or none, or few, do hang/ Upon those boughs which shake against the cold /Bare ruin’d choirs where late the sweet birds sang.”

During the two decades we lived in a house I built on a forested hill near the coast of Maine, surrounded by 600 acres of old-growth birch, maple and hemlock, November was prime time for topping up my woodpile and erecting my elaborate Rube Goldberg plant protectors that never failed to amuse the FedEx guy when he found his way up our lonely road into the forest. More than once he asked me why I went to all the trouble to build an elaborate garden deep in a wood that only family, friends, occasional lost strangers, the odd moose and the FedEx Guy himself would ever see.

“Summer’s lease is brief. And bittersweet November simply reveals how far I’ve progressed on this earth,” I continued, though I don’t think he cared a fig for either bare ruin’d choirs or boughs shaking against the cold.

Owing to the angle of the retreating sun, that said, the November sunlight always seemed deeper and richer on late autumn afternoons, a benediction through stained glass, throwing the contours of my wooded patch of earth into stunning relief, while the rocky soil underfoot offered spicy scents of decaying leaves and the garden’s last gasp as my private world turned inward. As a bonus in the department of sidereal affairs, the stars on any clear November night tended to glitter like diamonds splashed across black velvet — ideal for catching the Milky Way, the year’s final meteor showers and in some years the rare treat of the Northern Lights.

To my November-loving way of thinking, blazing fires, the earlier darkness and the annual gathering of the tribe for the slower, unrushed Thanksgiving rituals  —  cook, eat, watch football, doze in an armchair, take a walk in the woods, eat again, doze again, have a final slice of pumpkin pie before bed —  made the holiday my top designated feasting day of the year. (Though I’m thankful it comes but once a year. Otherwise I’d resemble either Shakespeare’s Falstaff, or at the very least, the Clifford the Big Red Dog balloon from the Macy’s Thanksgiving Day Parade.)

Not surprisingly, November is the keeper of many of my favorite memories.

Three decades ago, having uprooted my life and moved from Atlanta to a bend in the Green River outside of West Brattleboro, Vermont, I found myself unexpectedly renewed owing to the charms of the eleventh month.

Having taken possession of a small wooden “solar cabin” owned by a pair of  delightful aging hippies who’d grown wealthy selling chemical toilets to fellow urban escapees, I heated the place with apple wood I split by hand, falling asleep most nights under a down quilt, warmed by the glow of my Intrepid woodstove and a young golden retriever from the local Humane Society who believed two-dog nights were better than one.

Before month’s end, I’d taken up fly fishing and playing golf again on a 9-hole course in town. An old-timer informed me Rudyard Kipling played there during the time he lived in Brattleboro, allegedly not long after he published The Jungle Book. I never managed to confirm this story but the very idea of it helped me rediscover my favorite boyhood game.

That November, my neighbors along the river road invited me to a community “alternative” Thanksgiving supper at a local hay barn. There was a fiddle band and lots of covered dishes made from local organic gardens, “all natural” dishes that to my traditional Southern palate tasted suspiciously like sautéed boxwood, including something that looked just like turkey but turned out to be my first encounter with tofu.

To a slightly homesick Southern boy far from home, missing his mama’s famous collard greens, cornbread and fried okra, this constituted a walk on the wild side of American counter-culture that I cherish to this day. That evening, I danced with a beautiful gal named Snowflake who ran a mushroom farm and had more underarm hair than me and innocently inquired if — my being from “The deep South” — I’d ever met anyone who was “actually in the Ku Klux Klan.” I replied with a tongue firmly planted in cheek that my daddy his own self was once in “our local Klan – until his klaxon switched from wearing all-natural cotton sheets to perma-press.” For some reason, she did not find this amusing. The dance ended quickly and I never did get to try one of her gourmet mushrooms.

The next time November rolled round, however, I went on a first date with a beautiful dark-haired girl who’d just graduated from Harvard and had come to work at the magazine where I was not only the senior writer but also the first Southerner in Yankee Magazine’s 75-year history. By then I was living in the middle of a New Hampshire apple orchard just outside Peterborough and having the time of my life writing about life in every cozy corner of rural New England — working at a legendary magazine where I learned most of what I know about the power of great storytelling.

That next autumn, that beautiful girl and I got married in a salt marsh north of Boston, days after a hurricane swept up the coast from Carolina. Our colorful Yankee neighbors in the village of Essex brought covered dishes — baked beans, turnip pie, Indian pudding and homemade wine. The dancing went on until well after midnight, about the time the dance floor began to sink in the mud.

I’d come far and my romance with November continued — and grew — over the next two decades. It was the month I most loved for working in my large faux English garden at summer’s end in Maine, topping up my woodpile for the winter, cleaning my tools, tucking in plants, drinking hot cider, watching fires and changeable skies and the southward flight of birds, savoring the solitude and beauty of nature’s most revealing month.

Between us, I thought I would never part with that house I designed and built on that beautiful forested hill of birch and hemlock; I had always imagined my ashes someday being spread over a garden I spent almost a third of my life building and tearing apart, fussing over and planning, digging into the soil and delving into its soul.

But as Truman Capote once pointed out, every Southern boy comes home again — if only in a box.

In time, after my children had grown and headed off on their own life journeys, I succumbed to a quiet longing for home that had to be answered.

It was a decision I’ve never fully regretted, for memories are like glowing coals in winter and life is full of lovely compensations. One is this magazine and the circle I’ve somehow closed.

Another is November in North Carolina where I can grow roses almost to December, a month just as sweet and revealing as it ever was on my soulful Maine hilltop . . . though I do miss the naked forest, that lonely moose and the mystified FedEx Guy from time to time. OH 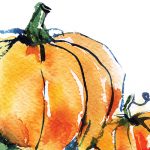