A colorful and lush garden embodies the spirit of its gardener 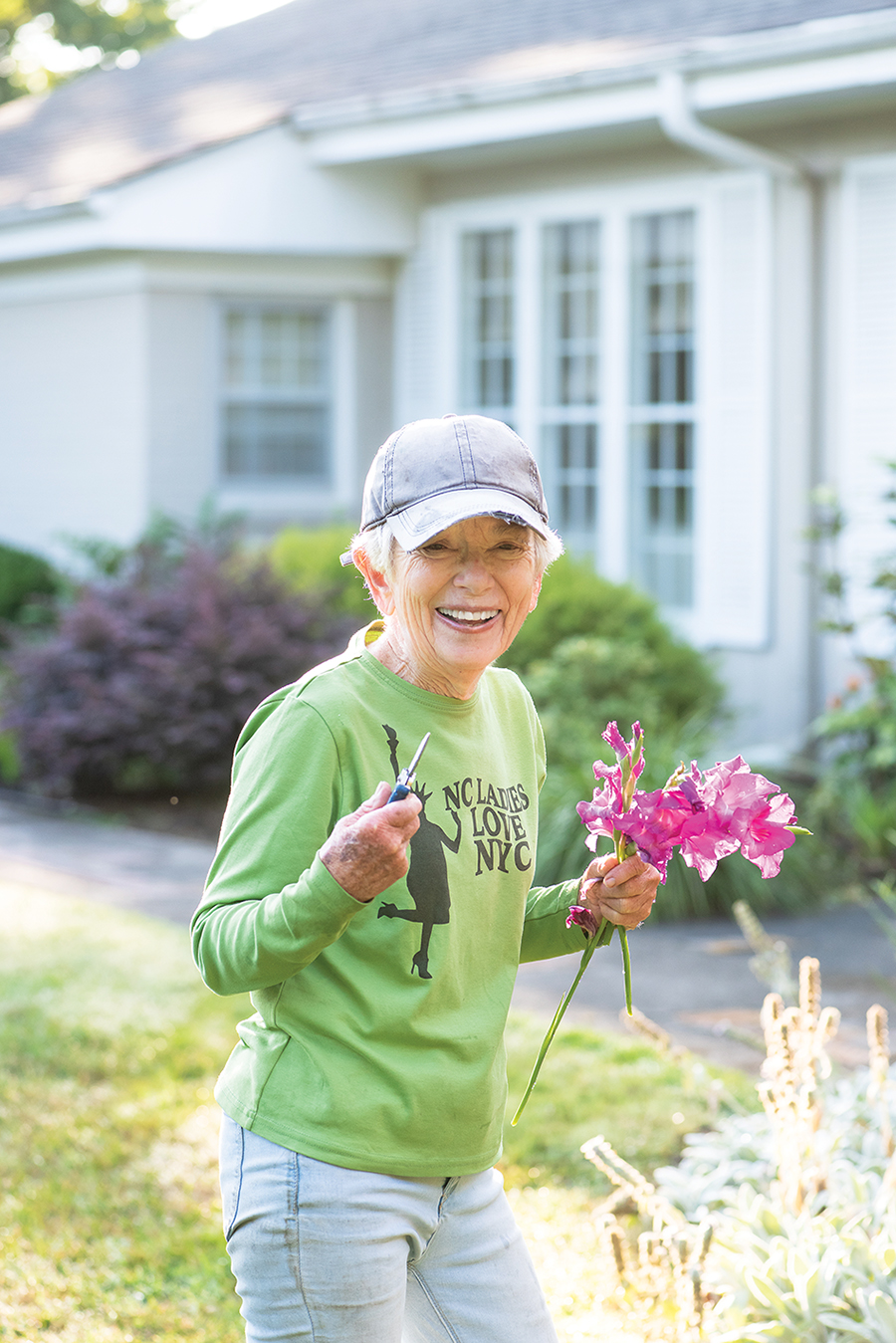 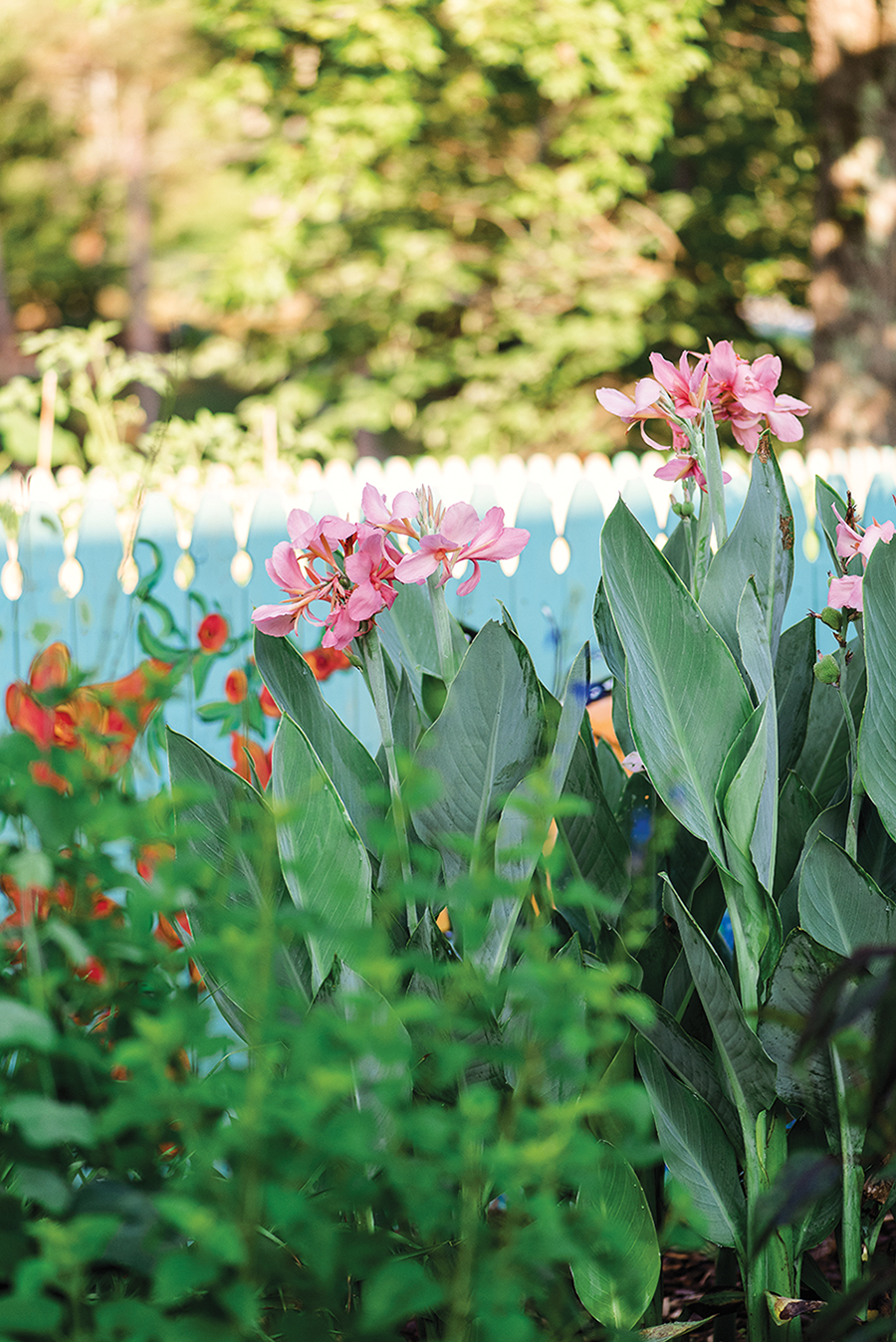 Martha Yarborough has been up since 7 a.m., the thermostat hovering at 80 degrees and nary a breeze. A lesser person would have stayed in the shade.

But not Yarborough, a petite, energetic woman in a state of perpetual, sunny-side-up motion.

Time spent weeding, hoeing, mulching, watering and fussing in 3 acres of flower beds and veggie gardens is meditative therapy for the scrappy gardener. Most of her gardens are recently created, and by her own hand.

“The gardens happened as you see them in the last three or four years.” Transformative, productive years. One sign placed by a pathway simply reads, “Gratitude.”

She insists she couldn’t be happier during these solitary hours. Nor more grateful. “On a perfect day, I’m out in the yard doing gardening, heavy labor. I enjoy people and being connected. I enjoy entertaining a lot.” But, Yarborough emphasizes, “my alone time is in the garden.”

“Listen, I feel very strongly, when we are blessed,” she adds, “we are commissioned to bless others. Gardening presents life lessons all the time. When you’re cutting flowers, giving them away, it’s cyclical. The more you give away, the more that comes.”

“I learned from fellow gardeners and I started doing things,” she says. “You can’t be afraid; if it doesn’t work out you just change it.”

She will later work with a charitable interest in town, hike or cycle.

But occasionally, Yarborough gardens for 10 hours at a go.

In the Triad, Yarborough is best known for her devotion to education, arts and culture. This May, she hosted a Shared Radiance Performing Arts production of Shakespeare in the Garden, featuring Richard III, each act taking place in differing locations on the property. The War of the Roses was waged amidst actual roses, with an actual black steed and knight in armor making a convincing appearance on her front lawn.

Yarborough had seen the horse and rider at another event, and convinced them to come to the outdoor theatrical fundraiser. 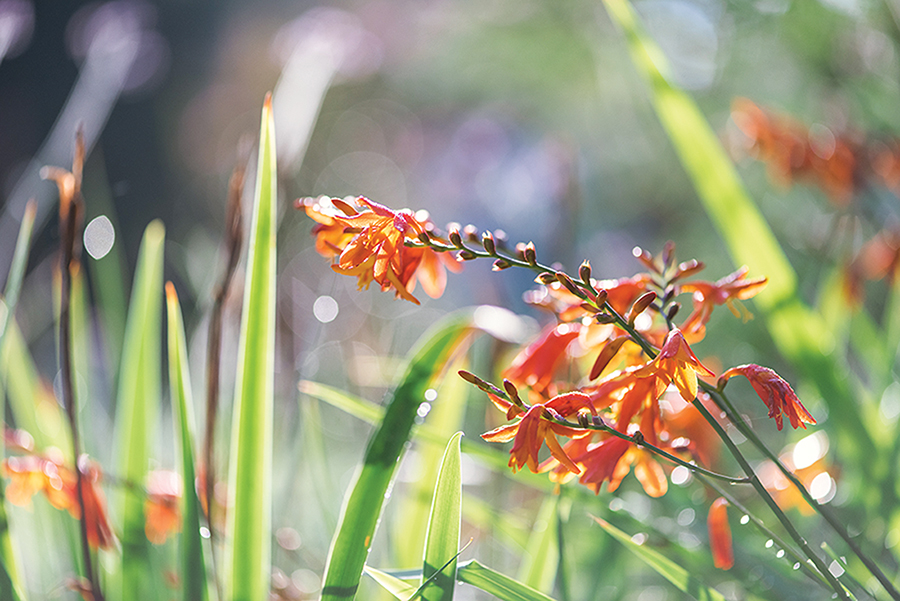 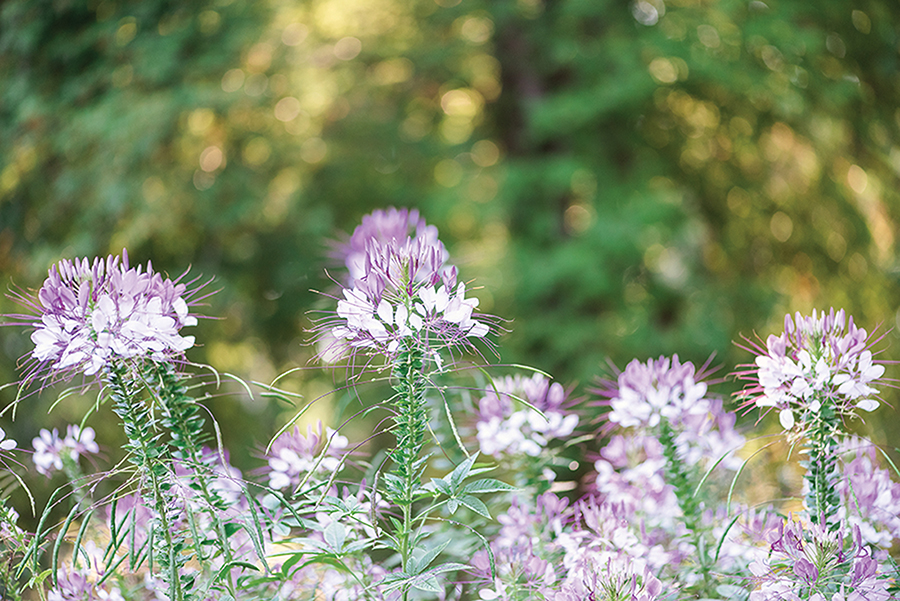 She is especially supportive of working women. “I am 78, so I would like to be living an engaged life . . . being involved in my community and with family and friends.”

Until her husband Gordon’s death in 2006 following a 20-month battle with ALS, a neurodegenerative disease, the couple dedicated themselves to education and civic projects. Gordon, aka Yogi, owned High Point furniture concern, Yarborough and Company. (She wisecracks: “Not the most original name, huh?”)

While her husband excelled in business, Yarborough dedicated herself to education and students with special needs, ultimately working as a coordinator with exceptional children in the Guilford County Schools. In 2015, Yarborough gave $1 million to her alma mater, Greensboro College, funding scholarships.

In the mid-70s, Yarborough and Yogi moved to a mini-farm rimmed with a pond and pastures, where they raised sons Preston and Austin. When the boys were teens, she reentered the workplace and resumed teaching at-risk and special-needs students for 16 years, retiring in 2008.

But with newfound time, Yarborough leaned into gardening for its many benefits, becoming a Master Gardener in both Guilford and Davidson counties. Her gardens exponentially expanded.

Yarborough has survived more than one ordeal to arrive at this particular place of grace and fearlessness. “I learned from fellow gardeners and I started doing things,” she says. “You can’t be afraid; if it doesn’t work out you just change it.”

Sitting in the sunroom surrounded with floral paintings, she has her computer stationed with a view of the gardens. Recently installed solar lights become glowing orbs at dusk, making the garden “look like a fairyland!” 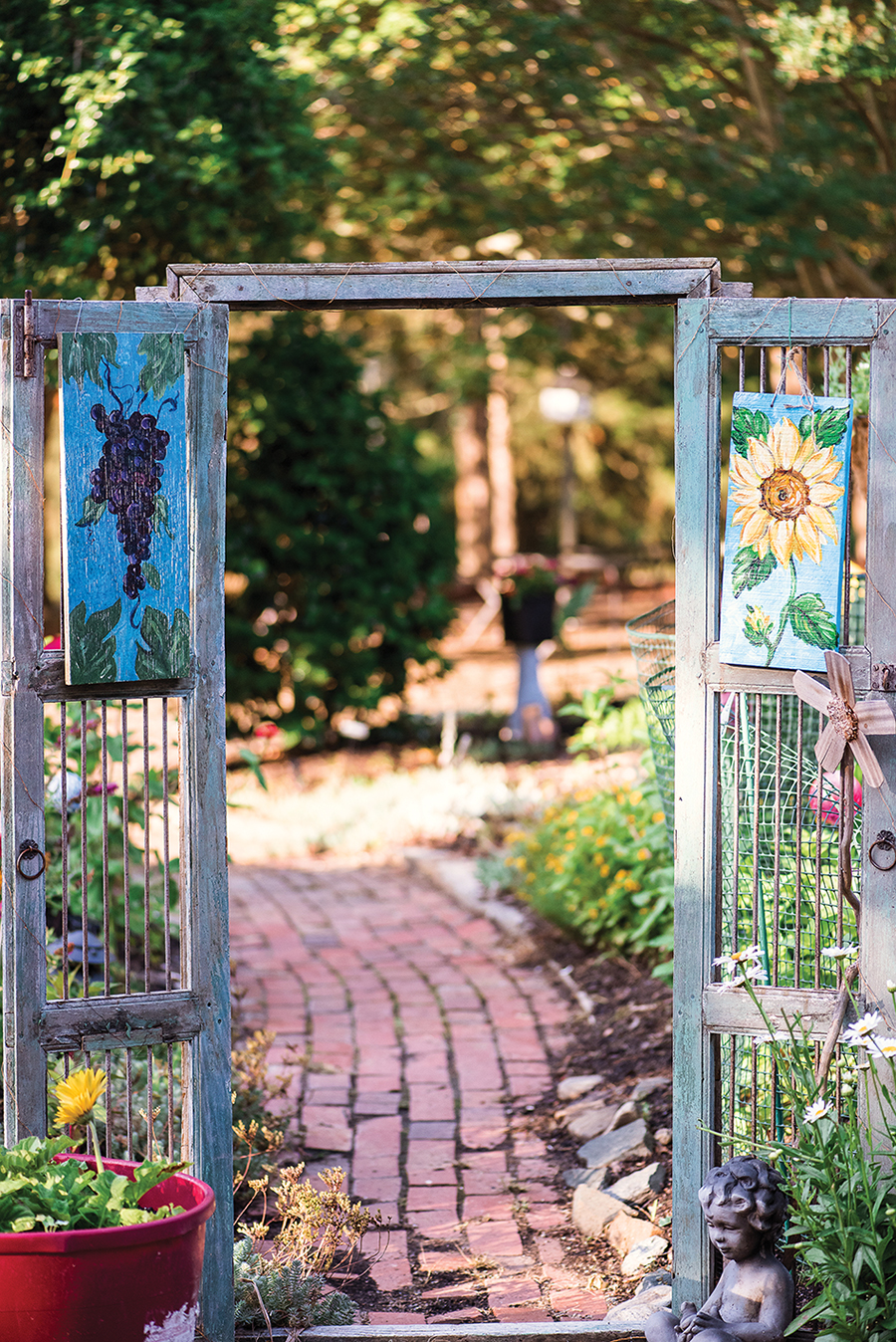 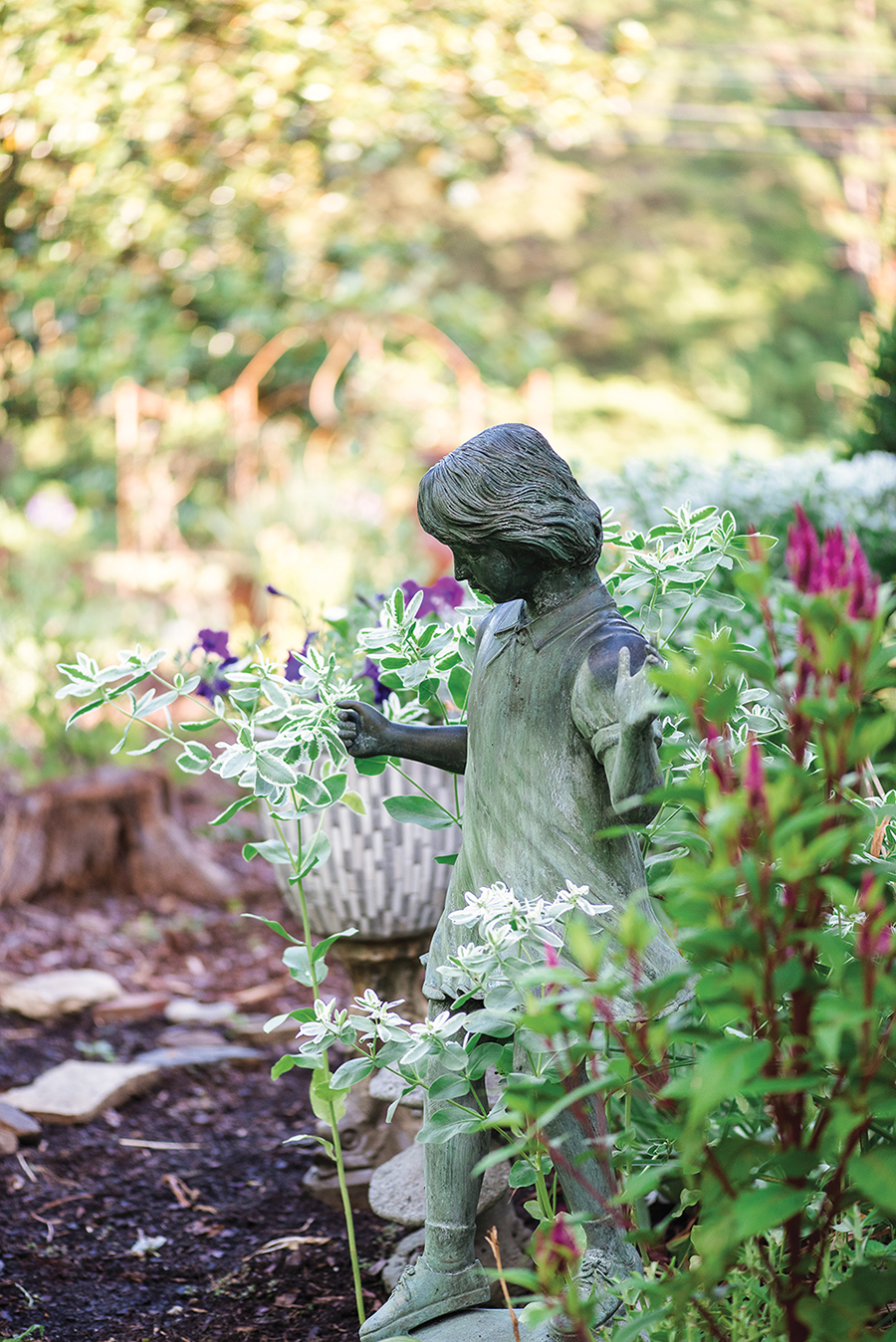 Offering a tour, Yarborough grabs a hat, surveying newly created beds in the front of the house where none existed merely a year ago. (There was a dirt track for her son’s bikes once, she points out.)

Notably, a winding path is named the Simple Abundance walk.

She stops and kneels, naming plants by both their common and botanical names. “These little seeds . . .” she coos, bending over an immaculate bed. “These seeds! You plant them and they turn into something so beautiful! It never ceases to amaze me!”

“Then, when people have given you plants — and I have plants from people who have died — I feel they are living right on,” Yarborough smiles, rising up to her feet.

How does she do this, all by herself? She thinks of her acreage like a house, albeit one with uninvited guests.

“In my head, I have many rooms. And you can’t work on every room every day. You have deer that come. You have varmints that come in . . . and you have to work around it.” She adds, “The deer have eaten all my day lilies but you have to move on!”

Yarborough’s face clouds briefly while inspecting another bed. Vividly pink and leggy cleome, which seem to be taking over, must come out. “It’s too much!”

She walks across colorful, hand-painted stepping stones (she is painting at least another 80 to complete a new pathway) en route to a vegetable garden, enclosed with a fence featuring a mural created by artist Dana Holliday.

“Advice from a Butterfly” adorns the wooden fence boards. “Take yourself lightly,” is the core message, along with letting your true colors show. Holliday painted another mural of red poppies featured at the rear of Yarborough’s fastidious ranch home.

Meanwhile, Holliday, who also hikes, is in the British Cotswolds. But she emailed questions to pose to her good friend. “What drives Martha, and where does she get her endless energy and enthusiasm?” she wondered. “She can fall off a 40-foot cliff in Nova Scotia and not only survive, but come home and do a TV interview.”

It seems that five years ago, the 5-foot, 1-inch, 100-pounder fell into a ravine and was airlifted to a hospital by rescuers with the Royal Canadian Mounted Police.

But that traumatic event seems to be shrugged off, relegated to a footnote in Yarborough’s colorful and intrepid life.

In short, she has long since moved on to climb another mountain. “You only live once,” Yarborough says firmly.

What she prefers discussing is having a purpose in life.

So, she talks about education, the arts, fundraising — the cliff story comes much later, after she has walked the farm. Wearing a teal-colored hat and her face wreathed in smiles, Yarborough points out the many plantings identified with descriptive markers: Blackberry lilies. Callas. Lambs ear. Dahlias. Allium.  Poppies. Lenten roses. More lilies. Clematis.

Flower beds blossom everywhere the eye falls, each lovingly nurtured. Each appropriate to its season. 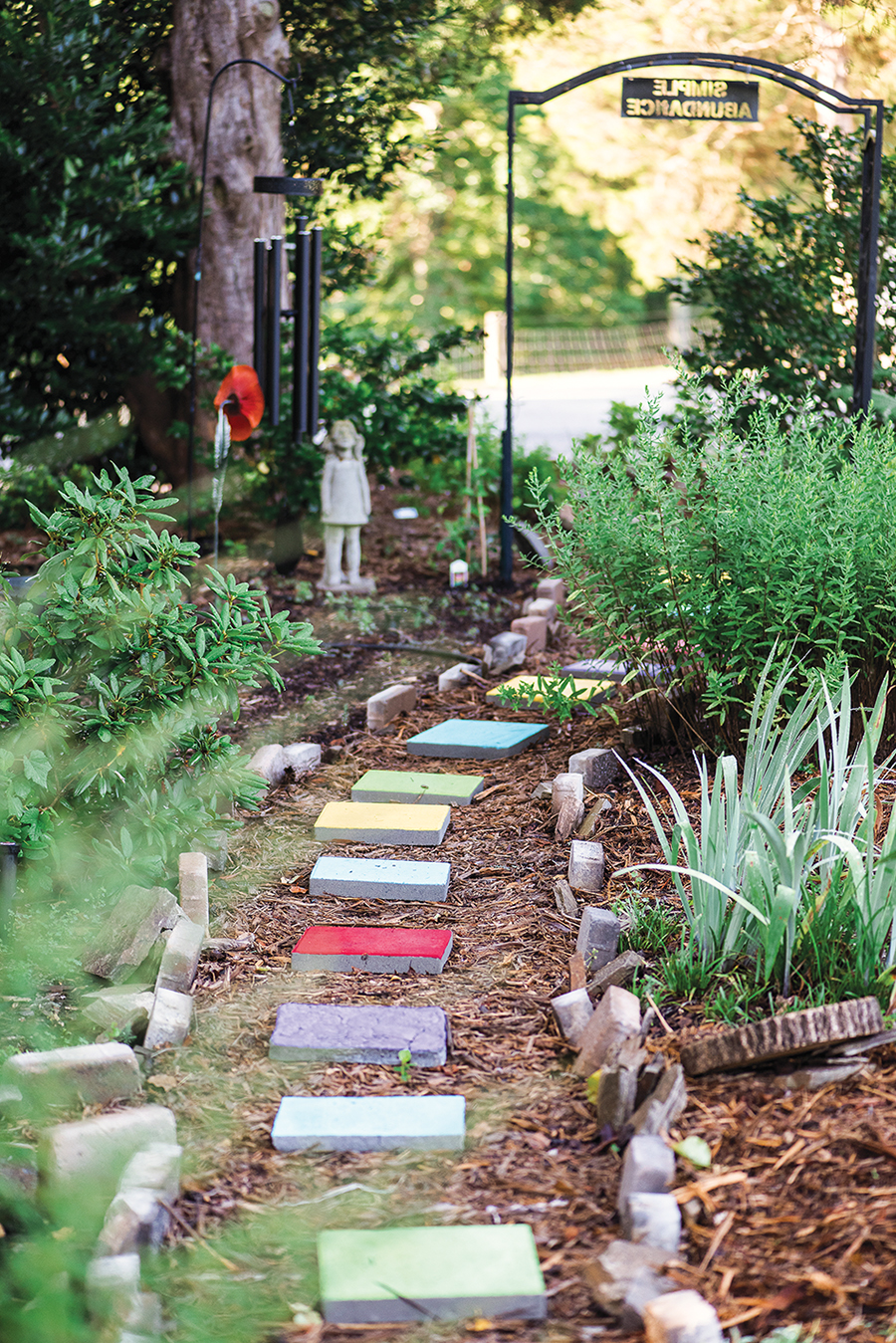 Is this all her own work?

“I just have a mower,” Yarborough answers, meaning a man who mows the property. The weeding, the planting, the tending, she says firmly, allowing herself a modicum of pride, are hers alone.

There is detectable pride, too, in Women in Motion, which she helped found in 2015. This initiative supports working women in High Point, Jamestown, Archdale and Trinity.

Yarborough describes a side gig, ushering at the Greensboro Coliseum since 2006, in order to enjoy events like bull riding, which tickle her. “I wasn’t going to sit home,” she confides, staying even busier following Yogi’s death.

Then, pandemic isolation grounded her. She coped by staying in motion, walking and cycling. “I called a friend and I said, ‘Let’s hike every trail in Greensboro!’ We walked 10–12 miles a day.”

She learned to find joy in ordinary moments and purpose in rescuing animals.

Only after exhausting all subjects does Yarborough settle into the Canadian misadventure.

The calibration of the conversation changes, slowing.

In 2017, she was hiking with the travel group, “Roads Scholars,” in Nova Scotia. “It was our first day out — a group of about 15 of us, with no cell phones. So, we went up to these waterfalls. And looking up, I said, ‘I want to go on up there.’ So about six of us went up the mountain. Coming down, I moved over to let somebody by me. The bank gave way. I fell 40 feet into a rock ravine. No cell phone coverage and so . . . ” Her voice trails off.

Somersaulting to the bottom of a stony ravine, Yarborough fell atop the backpack that saved her.

“People thought I had died. They said I flipped over. Well . . . I remember, vaguely, sitting up, and then they knew I wasn’t dead,” Yarborough explains with preternatural calm.

“They airlifted me to the hospital in Halifax [Nova Scotia]. The only thing I had was a broken collar bone and a punctured lung! It was absolutely unbelievable.”

“The Canadian Mounted Police called my son Preston and said, ‘Your mother has fallen off a mountain. You need to come get her.’”

In a few days, hospital staff asked Yarborough, “‘Where do you think you’ll be staying for the next two weeks? Because you cannot fly.’ So, Preston, who works for the Center for Creative Leadership, was in Vermont,” she recalls. “He took me to Boston. Then my son in Austin flew in and took me home.”

The aftermath of this trauma? 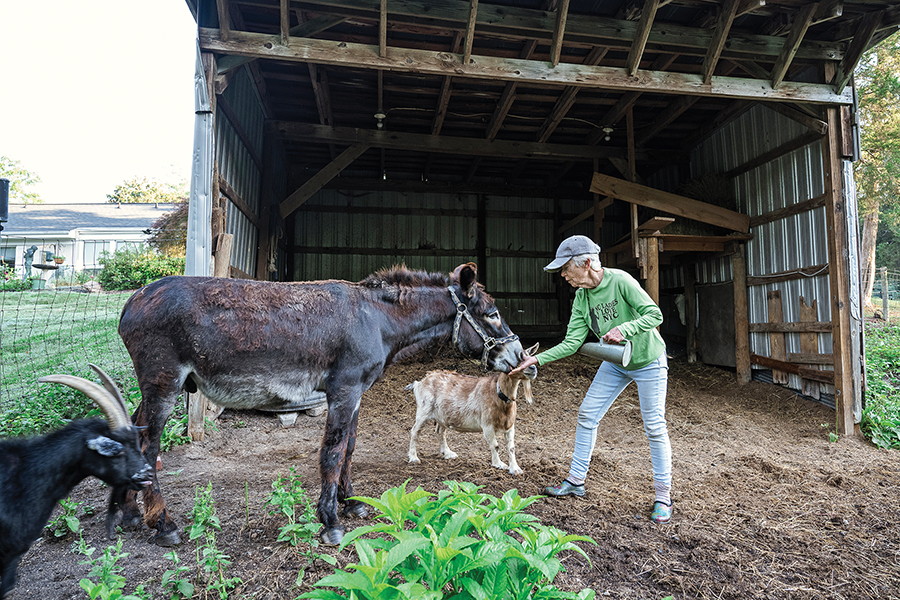 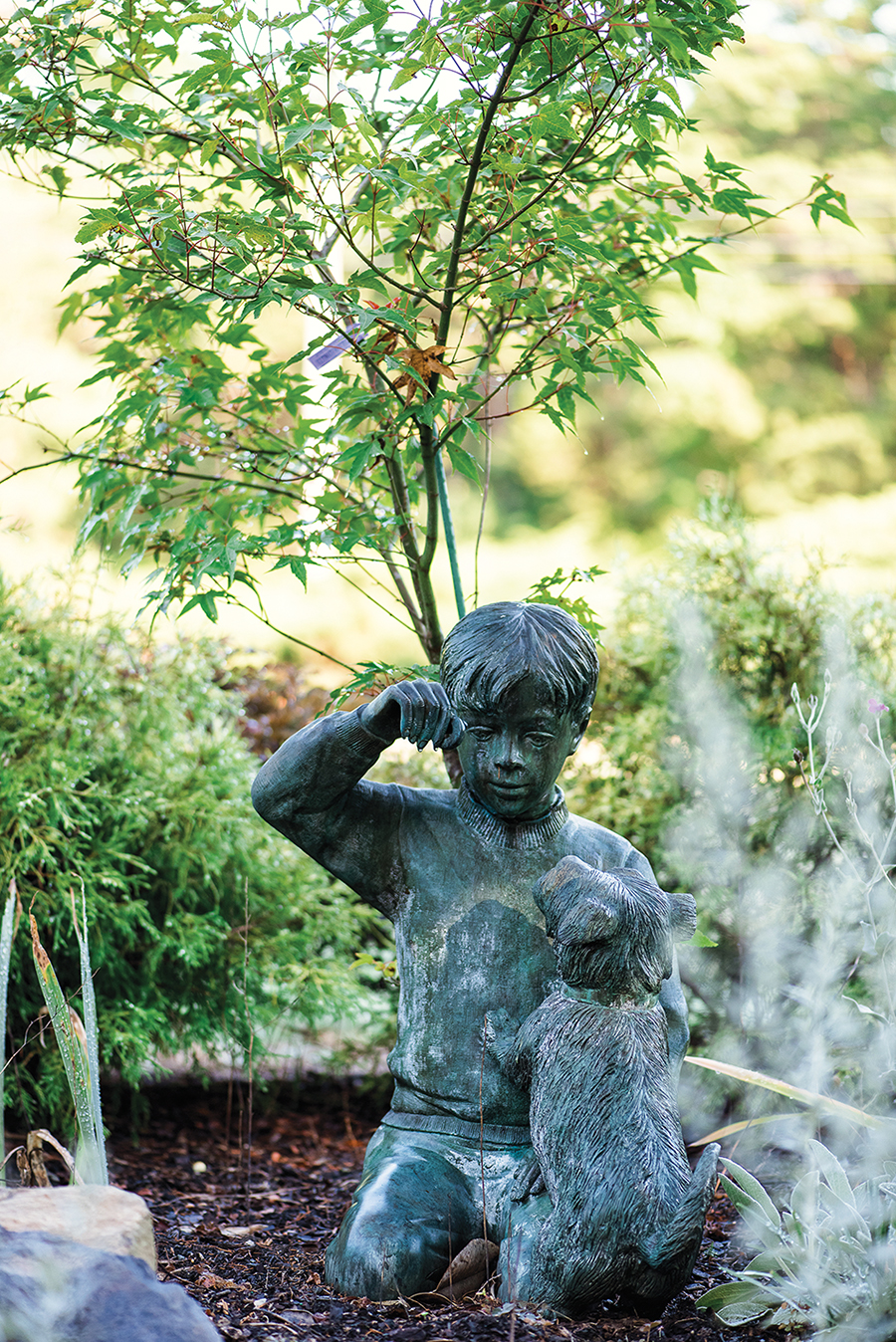 “I don’t have time to waste,” she says matter-of-factly of her recovery.

The next year, she hiked Montana’s Glacier National Park. She threw herself even more energetically into life.

“I love people,” she offers, by way of explanation. Seeking connection, she hiked, biked, camped, traveled and sought every possible outlet in the natural world.

Six acres remain in pasture where farm animals graze and find sanctuary. One of her two miniature donkeys, two of the three goats and a miniature horse have been rescued. Most are from Red Dog Farm Animal Rescue Network.

“I think when I fell and not only survived, but survived without a lot of physical traumas, I realized I was left here for a reason,” Yarborough says while feeding her menagerie of animals. “It’s important to live every day with purpose.”

“People who don’t know me think I’m prim and proper all the time . . . but I’m not. I don’t perceive myself as coming across that way. Because I’m real. I try to be real.”

But people knew her that way before, didn’t they?

Yarborough pauses. She thought so. But she’s loosening up, she admits later. She is hosting a group of women for a Grace and Frankie night with a dinner she will cook, and howls at how funny the Netflix series is.

A week later, Yarborough sends a short message while camping during 95-degree weather and torrential rains. “Guess where I camped last week? Hagan-Stone Park. Tent. [Friend] Sherry Raeford and I camped together.”

Near her driveway is a sign, a coda, visible while leaving:

“For each of us, there is a desert to travel. A star to discover. And a being within ourselves to bring to life.”  OH