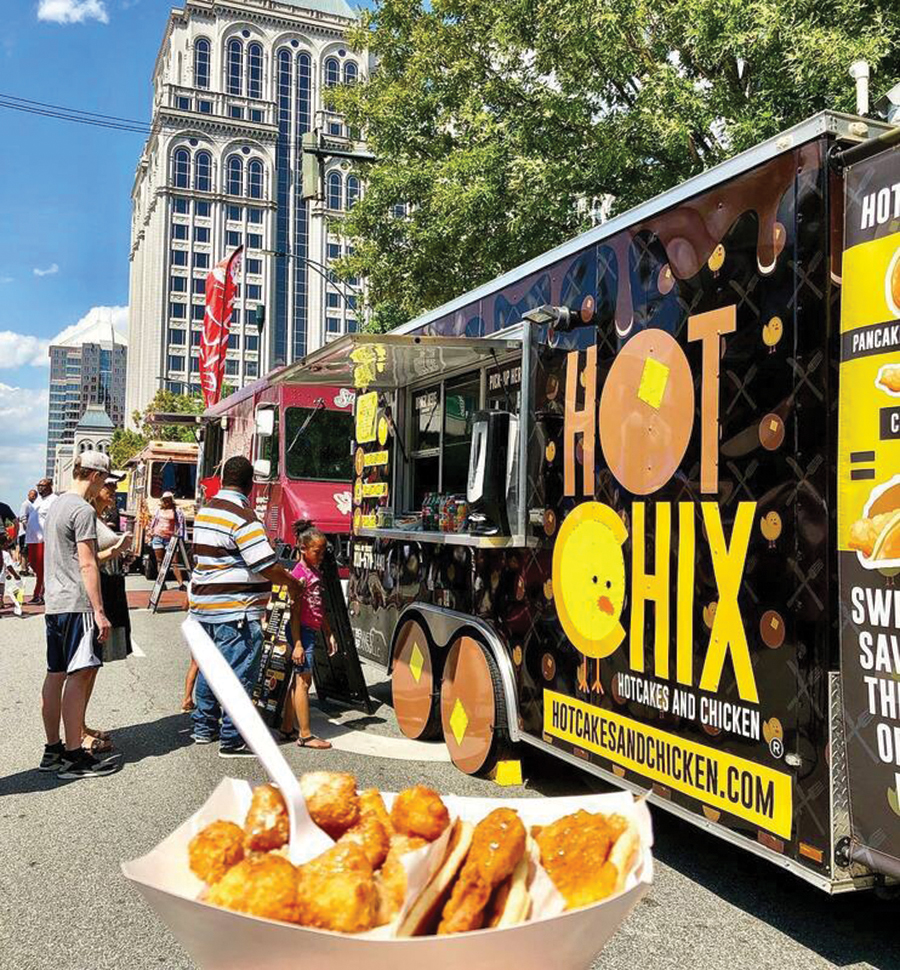 This year’s Greensboro Food Truck Festival might just be the best thing since sliced bread — and so much more. Make your way downtown from 3–9 p.m. on August 28 to enjoy the festive celebration of all the revolutionary (and delicious) traveling food mobiles that 336 has to offer. From Queso Monster’s Mexican munchies to Smokiin Mac’s Southern fusion of Mac ‘N’ Cheese, stuff your face with local and international cuisine from over 50 different food trucks. After getting your sugar fix with personalized funnel cakes from Cherry on Top or the queen of ice cream sammiches from Ice Queen Parlor, dance away those calories — not that anyone’s counting —  while checking out the venue’s live music and craft vendors. Before the kiddos come crashing down from that sugar high, let them jump up and get down in bounce houses, or burn out on the festival’s fire truck rides. We know you have a lot on your plate this summer, so indulge in some food therapy sprinkled along Washington and Greene streets, as well as Federal Place. Info: greensborofoodtruckfestivals.com. 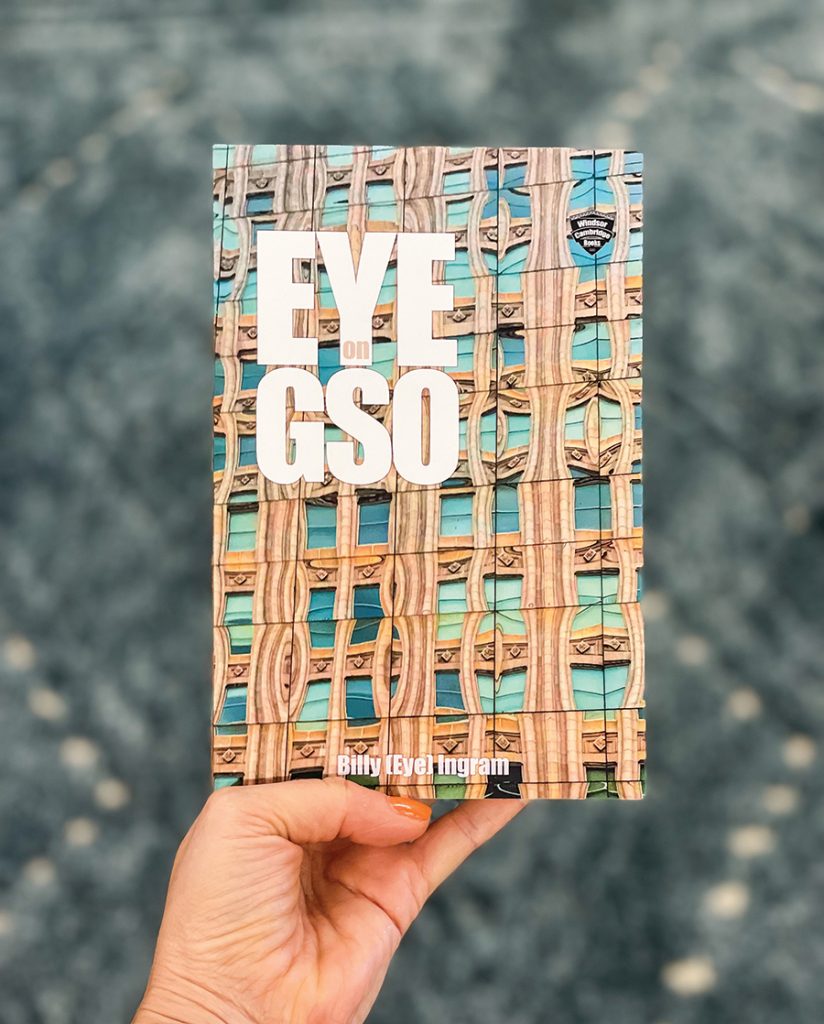 O.Henry’s very own contributing writer, Billy [Eye] Ingram, has recently gone to print with his book, Eye on GSO. The book’s collected essays engage readers in the historical happenings of our beloved city. Writing under the familiar sobriquet of “Wandering Billy,” Ingram reveals what lies beyond the naked eye. Dating back to 2016, Billy’s pieces have informed readers on everything from the epicenter of Greensboro’s underground music and skateboard scene, to the not so innocent happenings of State Street’s sin-ema. Flipping through the pages of Eye on GSO feels more like a comically vulnerable conversation between the past and present than your typical guide to all things Greensboro. Available anywhere books are sold. 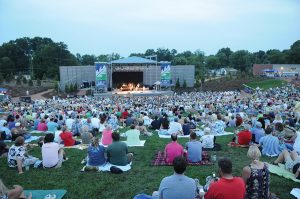 After seeing Disney’s latest breakout musical motion picture Encanto, we can’t stop talking about Bruno! The Family Madrigal might just be the songbirds of the new generation, delivering record-breaking hits and a beloved soundtrack we’ve been belting out since last November. Give your kids the chance to finally channel their inner musical prodigy at the Encanto Sing-Along Film Concert at 7:30 p.m. on August 13. Who needs fancy surround sound equipment when you have a live band leading the crowd in a performance synced with the showing of the film on the big screen? Audience participation is inevitable and highly encouraged, so fill the White Oak Amphitheatre with the sounds of joyous voices, whether on key or not — we’re not judging you on your perfectly imperfect pitch. Info: www.greensborocoliseum.com. 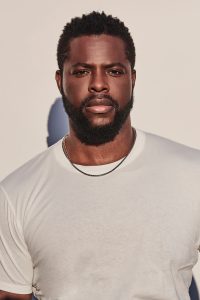 Bringing the MCU to U

M’Baku certainly stays busy as one of the greatest warriors in Wakanda, but, lucky for us, he’s using one of his nine lives to visit the Triad for UNCG’s Concert and Lecture Series. Winston Duke kickstarts UNCG’s annual celebration of the arts at 8 p.m. on August 26 as the first of many renowned performers and guest speakers. The longest running series of its kind in North Carolina, its 110th season treats you to the sounds of talented musicians such as Joshua Bell and the Indigo Girls. Put on your dancing shoes and join the Urban Bush Women as they bust onto the contemporary dance scene. Music to our ears! Info: vpa.uncg.edu. 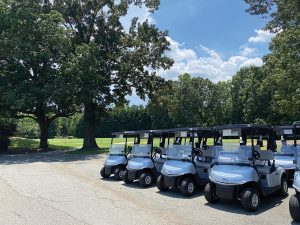 No ifs, ands or Putts

Bad at golf? Join the club. T.E.A. (Turning Everything Around) Time’s first Annual Charity Golf Tournament encourages all players with a love for the game and a heart for service to support the Serving Seniors Housing Initiative as they hit the Gillespie Golf Course on August 13, beginning at 9 a.m. All proceeds from the event will seek to repair the homes owned or occupied by senior citizens. Put your friend-chips to the test and register as a team of four for $200. Tackle the course solo for $65. The registration fee earns you an un-fore-getabble golfing experience followed by a lunch, plus the opportunity to bring back more than a nice tan in the form of bragging rights with awards and prizes. Sound like your cup of tee? Info: app.eventcaddy.com/events/t-e-a-time-charity-golf-tournament/register/.

I don’t know if the fish are jumpin’ or if the cotton balls are high, but I dang sure know it’s summertime. Our air conditioner’s been on the fritz for a month, and the livin’ sure ain’t been easy. My salvation, however, is the hundred or so music venues within driving distance, all air-conditioned. And that’s plenty for me.

• August 5, Greensboro Coliseum: When ZZ Top bassist Dusty Hill passed away last year, I, like everyone else, wondered if they would be able to carry on. Turns out, he and guitarist Billy Gibbons had prearranged for longtime guitar tech Elwood Francis to take his place. Somehow, that seems comforting.

• August 5, The Crown: Before COVID, I was the band-booker for Lucky 32’s “Music from a Southern Kitchen” series. Our most popular band, by far, was Graymatter. They had the SRO crowds singing along, standing on the seats and clapping in unison to “Peace Train.” If you’re of a certain age, you’ll love every single tune they play, guaranteed.

• August 17, Ziggy’s.Space: If Michael Franti could make time among his dozens of musical, poetic, documentary and social-justice projects, I swear I’d vote for him for President. But, like most idealists, he’d never run. His endless variety of compositions, styles and genres have one thing in common: They leave you wide-eyed with wonderment at both his talent and brilliance.

• August 20, Tanger Center: After, lo, these many years, the true legend that is Smokey Robinson is still touring, still has that unmistakable tenor and falsetto, and is still bringing crowds to their feet with both his rapport and repertoire. No wonder people say he’s the life of the party.

• August 21 & 22, Haw River Ballroom: For those of you who missed her opening for Bonnie Raitt at the Tanger, you have two chances this month to see the undisputed Queen of Americana, Lucinda Williams, as headliner. Her epic Car Wheels on a Gravel Road is considered one of the most perfectly constructed albums of all time. It’s still on constant rotation in my car, a quarter century later.

The Pleasures of Life Dept.August 2022, Department