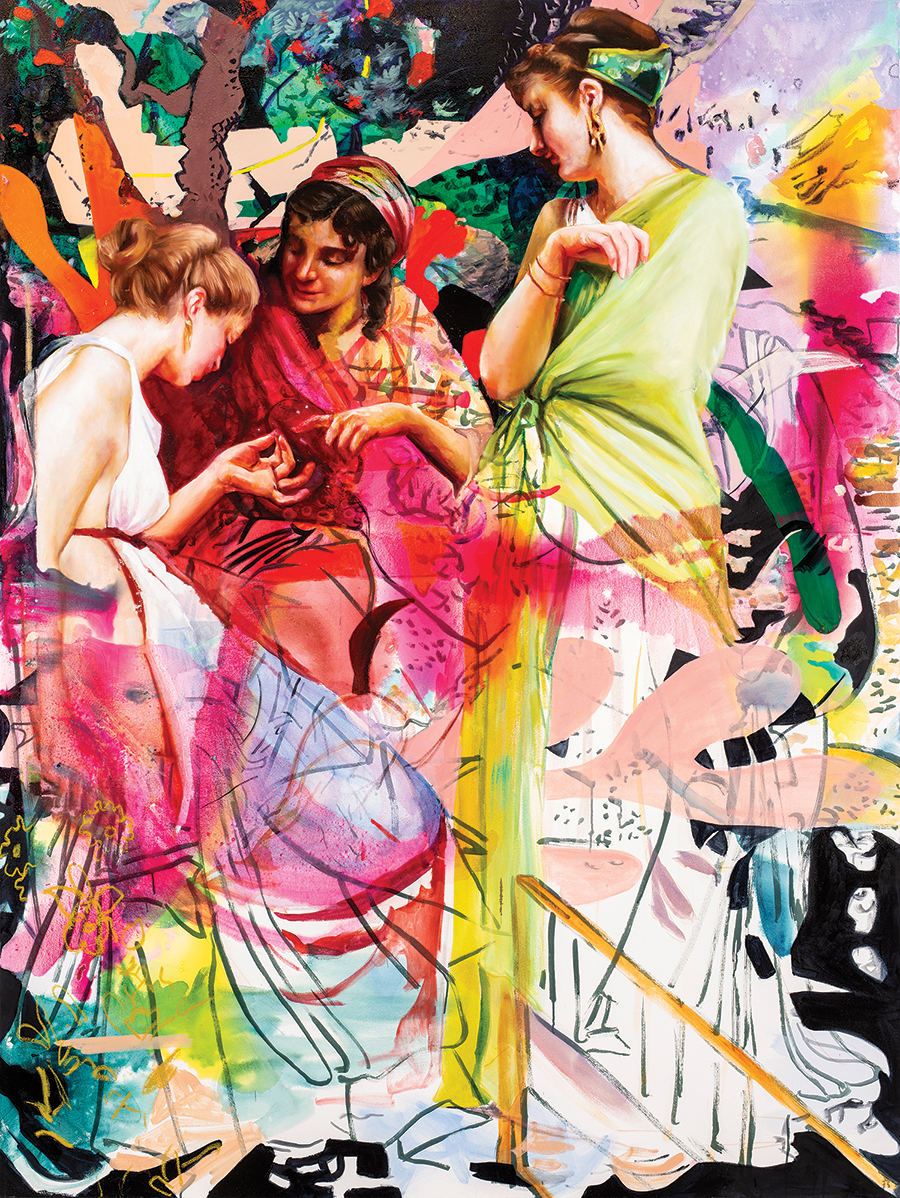 This month at WAM, don’t miss the October 9 opening of Splinters of a Secret Sky by Falk Visiting Artist Angela Fraleigh which is, in a word, empowering. Once portrayed as “docile objects for the male gaze only,” Fraleigh’s female subjects have been awakened from the canvases of Victorian paintings and lovingly invited into “dreamlike scenes where they exist for one another instead.” For this exhibit, the visiting artist also draws inspiration from the legacy of sisters Claribel and Etta Cone, whose trove of bold and vibrant artworks (including many by their friends Henri Matisse and Pablo Picasso) helped establish WAM’s collection. Fraleigh is an associate professor of art at Moravian College in Bethlehem, Pennsylvania. Catch her Artist Talk on Thursday, October 21, at 7 p.m. Get ready for a fresh perspective. Exhibit on display until December 11. Weatherspoon Art Museum, 500 Tate Street, Greensboro.
Info: weatherspoonart.org. 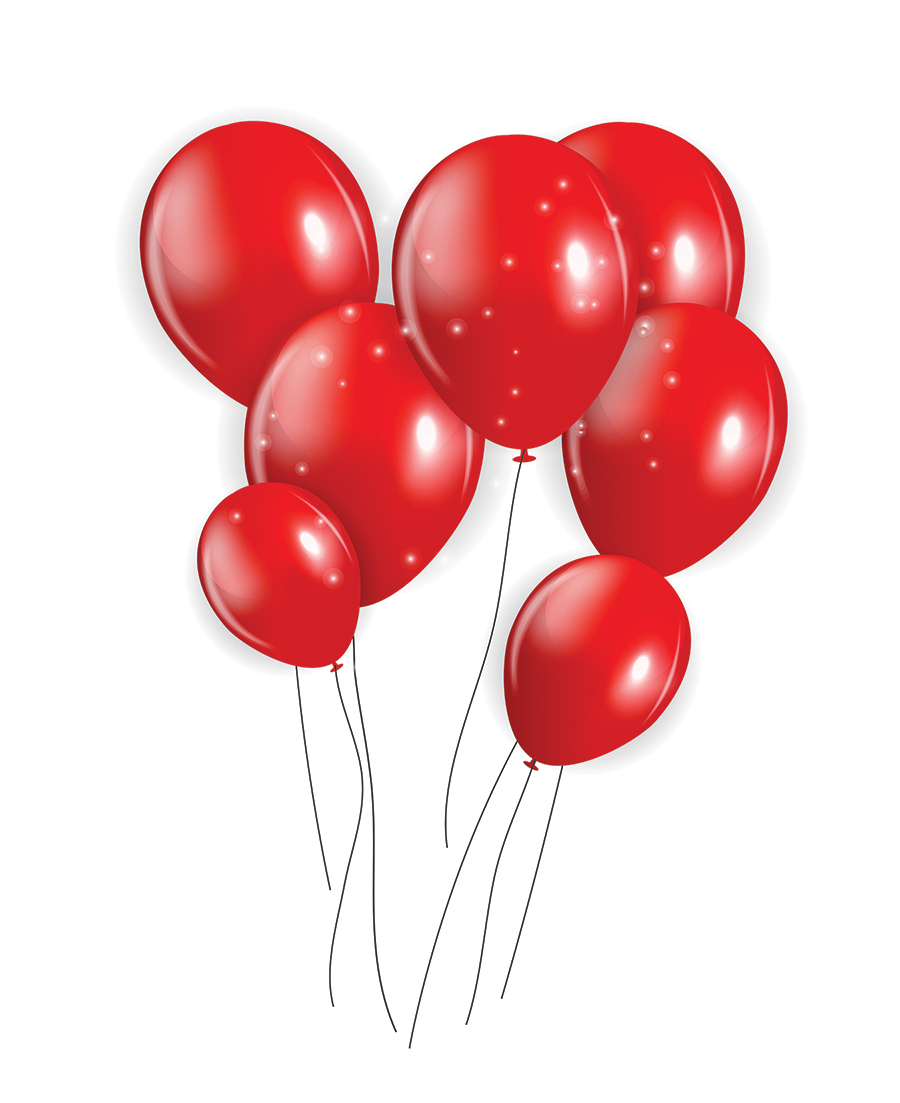 No, they won’t lead you to the Emerald City, per se. But they will guide you around the Greater Greensboro area for the 23rd annual Artstock Artists Studio Tour. This year, over 20 participating artists (eight of them new to the tour) will open their studio doors to the public on Saturday, October 9 (10 a.m. – 5 p.m.) and Sunday, October 10 (1–5 p.m.). Within, you’ll find pottery, oil on canvas and linen, sculpture (like iron man Jim Gallucci’s sculptures and gates), photography, wood and lino art prints, epoxy-resin art, high-fired stoneware (Bill Johnston’s clay foxes might be the cutest things you’ve ever seen) and Oz only knows what else. While you’re following the red balloons, check out acrylic/mixed-media artist Crystal Eadie Miller’s artwork at The Studio House in Summerfield, a 1929 cottage that now functions as an Airbnb and mini art gallery. Tour is free and open to the public. For a complete list of artists and gallery/studio locations (including 205 Collaborative and Sternberger Artists Center), visit artstocktour.com. 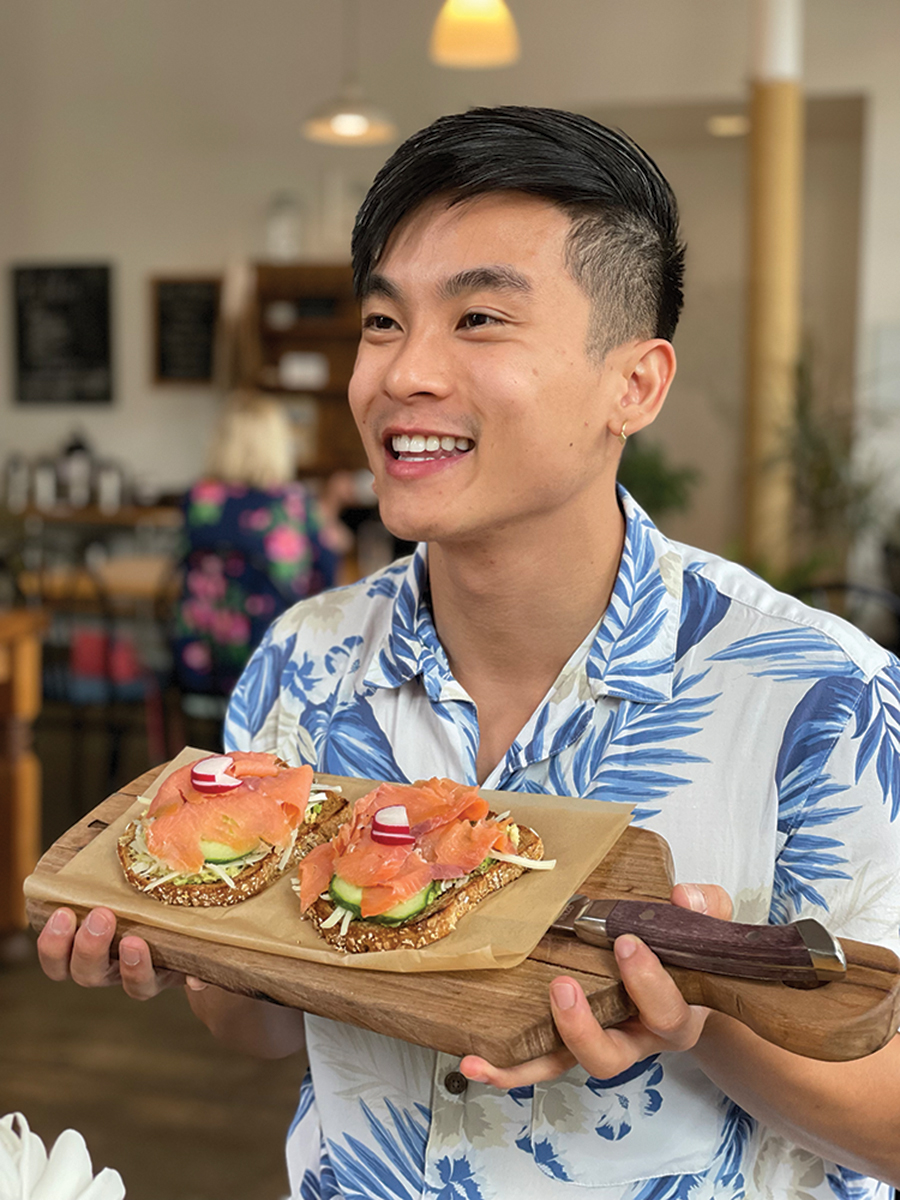 Do you read O.Hey, the (let’s call it shameless) weekly newsletter created by some of the self-proclaimed “genius young minds” on the staff of this magazine? Recently, a couple of said genii had the opportunity to join food-obsessed YouTuber Loon K. Do on his Greensboro food tour, featuring a total of eight local eateries. Move over, Stanley Tucci and Guy Fieri: you’ve been chopped. Search for Loon’s “Greensboro N.C. Food Tour 2021 Vlog #2” to catch the vid with some of your new favorite locals. And to have the best of GSO food, news and events dropped into your inbox every week, subscribe at oheygreensboro.com. 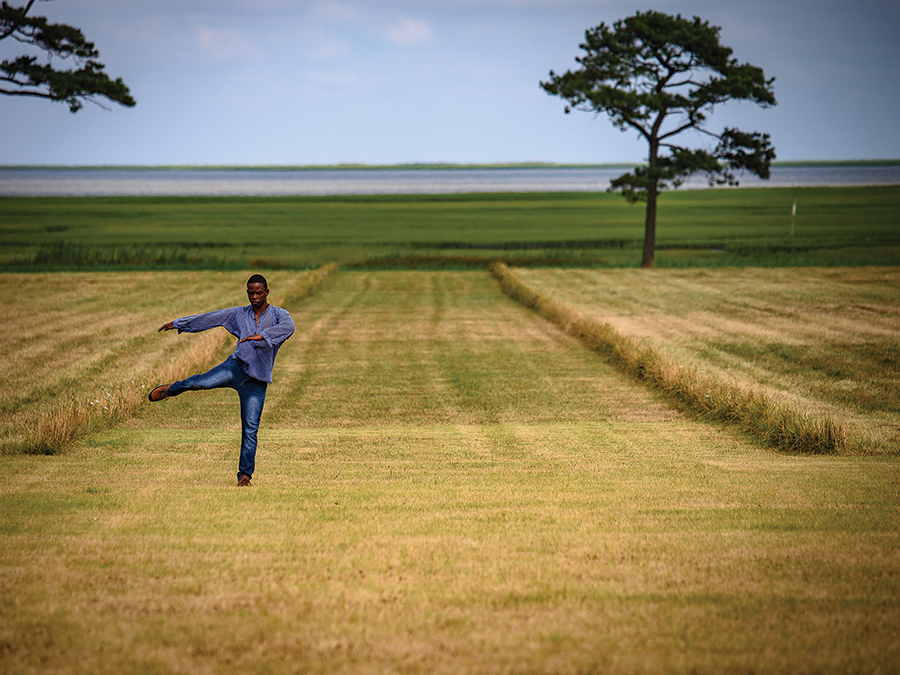 If the phrase “screen dance” evokes images of Tom Cruise sliding round in skivvies and tube socks, go ahead and try to shake that. On October 30, the Greensboro Dance Film Festival will demonstrate how screen dance (which is kind of what it sounds like, although you’ve really got to experience it to understand) has pushed the boundaries of choreography and movement beyond what’s possible onstage. “Dance has been at the center of cinema since its inception,” says festival founder Robin Gee. And yet, using the moving body to tell a story on screen somehow feels revolutionary. “It’s a new, old way of communicating,” says Gee. Now in its seventh year, this boutique festival features dance films from around the globe by students and established filmmakers alike. “It’s bringing the world to Greensboro,” says event coordinator B.J. Sullivan (memorialized as O.Henry’s Muse of Dance in the June 2021 issue). Organized like a progressive party, free screenings will be held at downtown venues, including GPS (aka Greensboro Project Space, located at 111 E. February One Place). Festival goers are encouraged to float about casually, mingle with others, engage in conversation, explore downtown and experience what Gee describes as “something unlike performance or film.” For more information and complete schedule, including an opening performance and party, visit www.greensborodancefilms.org. 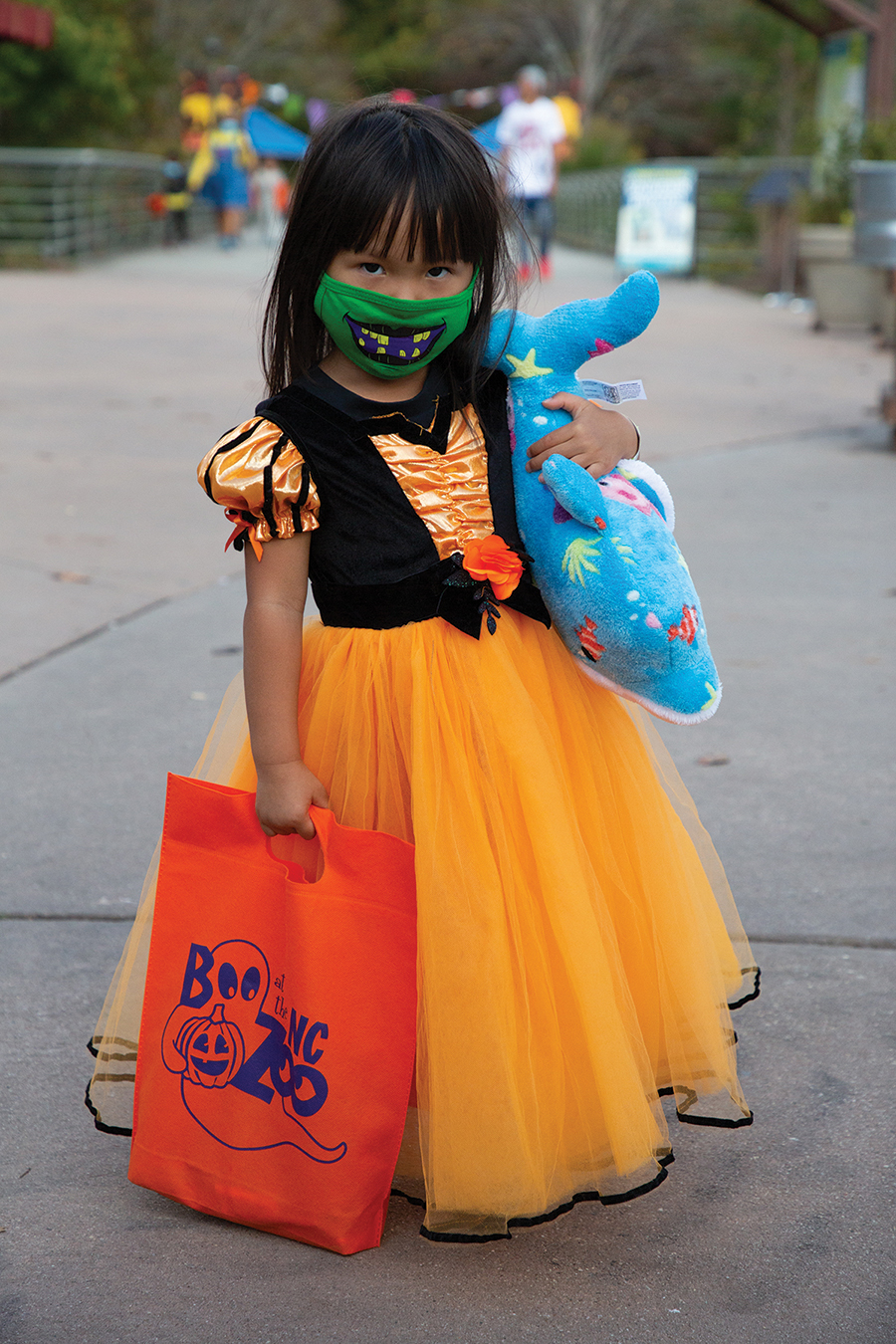 Boo at the Zoo — yep, daytime Halloween fun among creatures great and small — invites the kiddos outdoors to celebrate punkin season October 16–24. Trick-or-treat along the pathways of Africa, embark upon the Spooky Treehouse trek, wiggle to live music and discover which animals like to play with (aka smash and devour) their pumpkins. Experience “Boo at the Zoo” on weekends from 9 a.m. to 4 p.m. Wristbands may be purchased at the admission gates and at Junction Plaza. Face paint optional. Face masks required indoors. NC Zoo, 4401 Zoo Parkway, Asheboro. Info: nczoo.org

Ah, October, not only my favorite month of the year but also the most colorful. The reds and yellows of the leaves, the orange of the pumpkins, the multihued majesty of the sunsets, the black cloaks of the Halloween witches and the white blur of goblins, not to mention the every-color-under-the-sun of college football Saturdays. Indeed, it’s a beautiful time of year. And adding to the grandeur, the stages are once again lit as touring acts are gratefully crisscrossing the country. Here are a few that will be stopping in the green of the ’boro.

• October 1, Cone Denim Entertainment Center: Here’s hoping you picked up your copy of O.Henry early, because Blues Traveler wastes not a day kicking off the month. For three decades now, John Popper has been acclaimed by many as the finest blues harp player on the planet. They released their 14th album July 30 and are touring behind it. Travel on, my brother.

• October 2, Tanger Center: As I recall, Josh Groban was slated to christen the new Tanger Center last March, but . . . well, you know. I’m betting it was well worth the wait. That perfect combination of power, tone, control and dynamics make him arguably the finest male vocalist of his generation.

• October 15, Carolina Theatre: I’ve seen at least five Beatles tribute bands, and it is fitting that 1964 now uses “The Tribute” as part of their moniker. They are the best among many good ones. Suspend disbelief and let your eyes and ears take you back. They’ve got the ticket to ride.

• October 23, Ramkat: Yes, I know the Ramkat is not in Greensboro, but when Buddy Guy is in the vicinity, you make an exception. Ask any blues guitarist to list their heroes, and Buddy Guy makes the list every time. He played the White House in 2012 and persuaded President Obama to join him on “Sweet Home Chicago.” Now that’s some serious influence.

• October 29, Blind Tiger: Speaking of blues guitar legends, Greensboro’s favorite son, Eric Gales, is well on his way to becoming one. Except for one thing — he’s also becoming a rock, jazz, funk and metal legend. His virtuosity in so many genres is amplified by the fact that he is naturally right-handed, yet plays left-handed without reversing the strings. Come down to the BT, wish him a happy birthday and prepare to be dazzled.