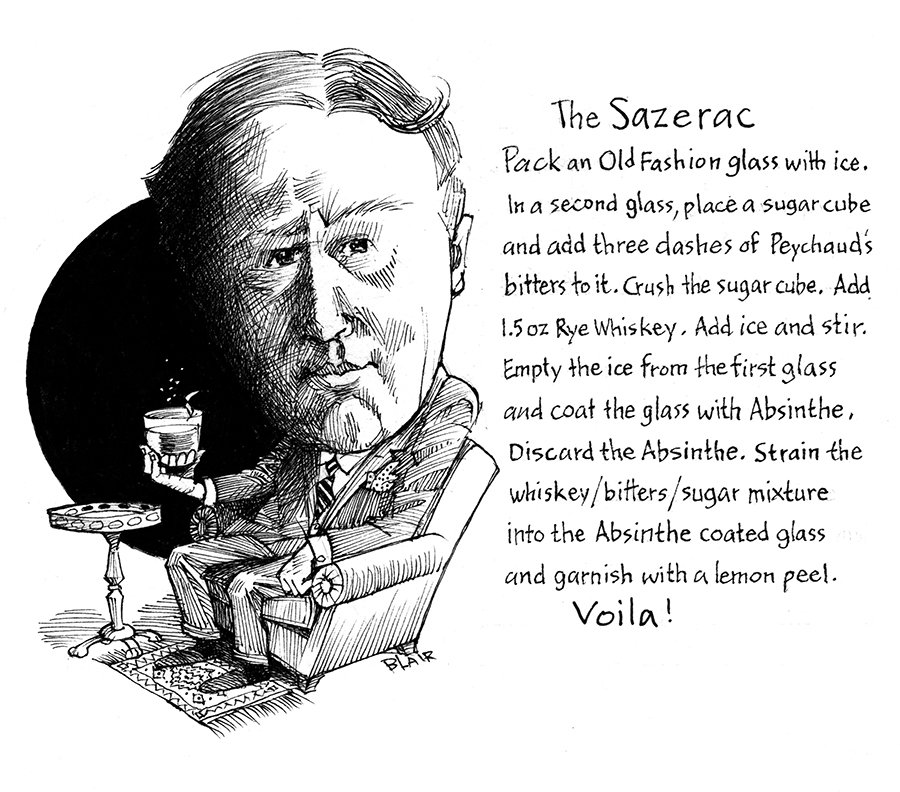 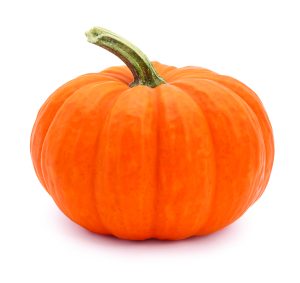 For gardeners, pumpkins are a lot like zucchini — you inevitably have so many the neighbors close the blinds and hide when they see you coming. Pumpkins are so easy to grow that they come up on their own if you planted them the year before. And it’s so rewarding to see them getting bigger and bigger and bigger. For non-gardeners, their charm falls off precipitously after Halloween. And why not, after we’ve all been assailed for months with pumpkin spice in everything from Twinkies to beer, from dog shampoo to spam? Let’s face it, by November most of us are ready to let pumpkins rot, leaving that sad hulk of yellow pulp and seeds behind.

But I’m here to defend the humble pumpkin (hold the spice) and I cite the French as my ally. In her Paris Cookbook, European restaurant critic Patricia Wells recounts how in recent years the French have gone bonkers over pumpkins, though the gourd times have been rolling in France for centuries with traditional dishes aplenty: soaked in milk and deep-fat fried, pumpkin au gratin, of course, and, my favorite, French pumpkin soup. Wells recommends the simplest preparation, cooked in chicken stock, with a little sugar, cream and white pepper, avec naturellement, dollops of cheese added at the table (Can you say triple crème brie and maybe a little truffle oil?) I don’t recommend using your tired and scorched jack-o’-lantern for cooking, though it’s still technically edible once you scrape out the candle wax. Get yourself to the farmers market and look for a “green” pumpkin, basically a cultivar of the Curcubita winter squash — fresher and tastier. What to do with your jack-o’-lantern? From roasting the seeds into a savory snack to using the shells as planters, the internet will doubtless have more ideas than you have time for. But at least they’ll have you looking forward to doing it all over again next year.    — David Bailey

’Tis the season to be thankful. And everyone knows how much pressure there is to say just the right thing sitting with the fam ’round a turkey you’re praying you didn’t overcook. (On the plus side, the wishbone will be dry and ready to snap, just like you.) We’ve got ya covered with some suggestions to show off your attitude of gratitude.

The fact that Cavalier King Charles Spaniels can trot around like true royalty now.

TikTok, for introducing us to cloud bread — cotton candy’s much older brother who can no longer handle gluten.

Taylor Swift, for dropping Midnights upon us from the heavens.

Any food that comes on a stick.

Cancelling plans. Like the one you had to host Thanksgiving dinner. 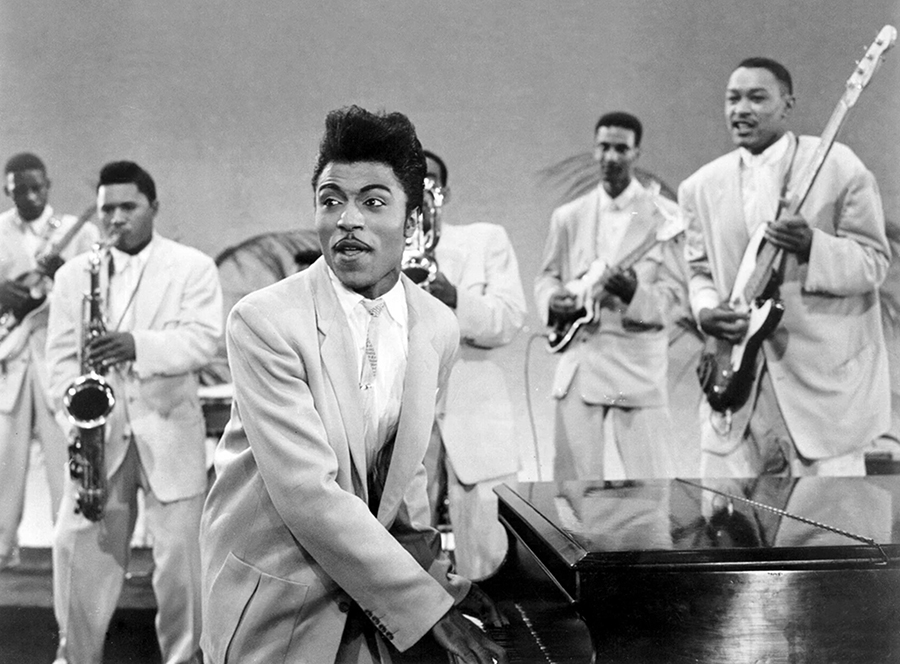 In 2018, I paid my respects to the former Miss Anne’s Tic Toc Lounge in Macon, Georgia. It was here, in his birthplace, where Richard Wayne Penniman, singular sensation and “Architect of Rock,” won the talent contest that rocketed him to fame.

As Little Richard, he embraced the color purple — before it was a book title or belonged to Prince, as he proudly once told interviewer Joan Rivers in 1986.

Merging rock with Bible Belt gospel lent his electrifying stage presence a certain thing. Initially, he admitted, “I didn’t know what to do with the thing I had.”

Soon enough, Little Richard figured it out, becoming a performer whose “pounding” of the ivories inspired Elton John, the Beatles, the Stones and David Bowie.

In 2001, the Little Richard Band had a gig at Greensboro’s Carolina Theatre, appearing before a sellout audience. Then 68, Little Richard had slowed a tad, and needed a little help with his physical theatrics, before he rocked the house.

He also proselytized, giving away autographed pics and Bibles afterward.

Little Richard died May 9, 2020, his death eclipsed by an avalanche of pandemic losses.

But Good Golly, Miss Molly! Imagine the raucous ruckus as he strutted through the Pearly Gates.    — Cynthia Adams 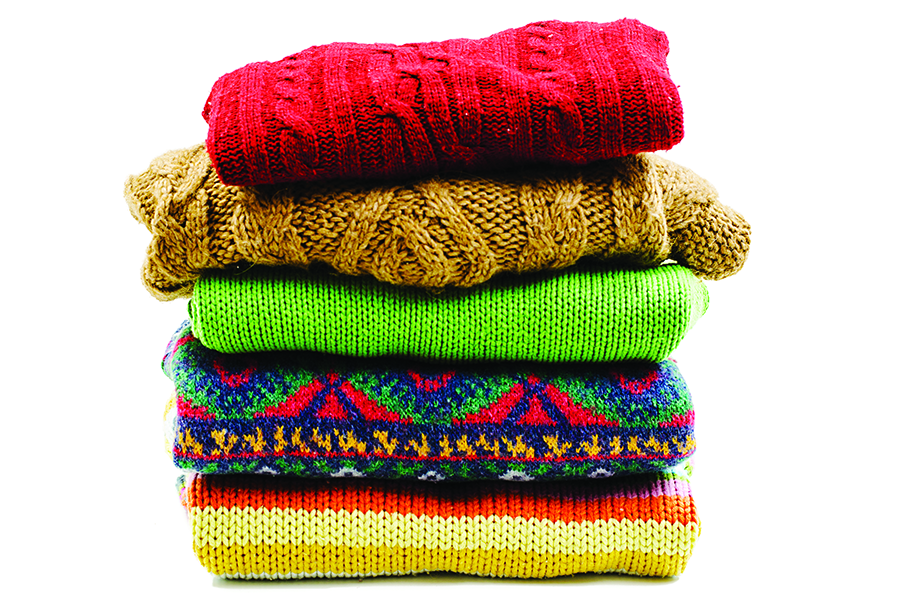 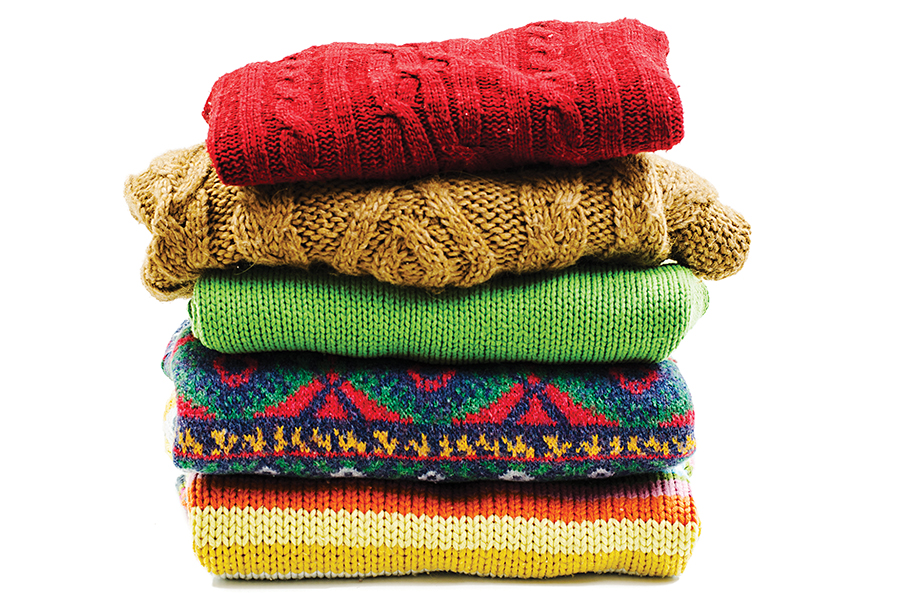 The concept is simple. Replacements provides space in its warehouse where “guests” can shop for clothing free of charge. Items are provided by individuals and companies working through a network of some 30 area nonprofit groups.

Whatever their situation, they shop for about two hours, looking for items that suit their personal style, trying garments on for fit and leaving with five work or casual outfits, plus underclothing, socks and outerwear — enough to dress them for a week.

“In some instances, it’s a one-time thing,” Ashley says. “But some people may need to come four times a year. And they’re always welcome.”

While manufacturers provide many garments, most of the clothing comes from individuals. To donate new or gently used items or to have a question answered, call Ashley at 336-697-3000, ext. 2497, or email ashley.west@replacements.com.    — Ross Howell 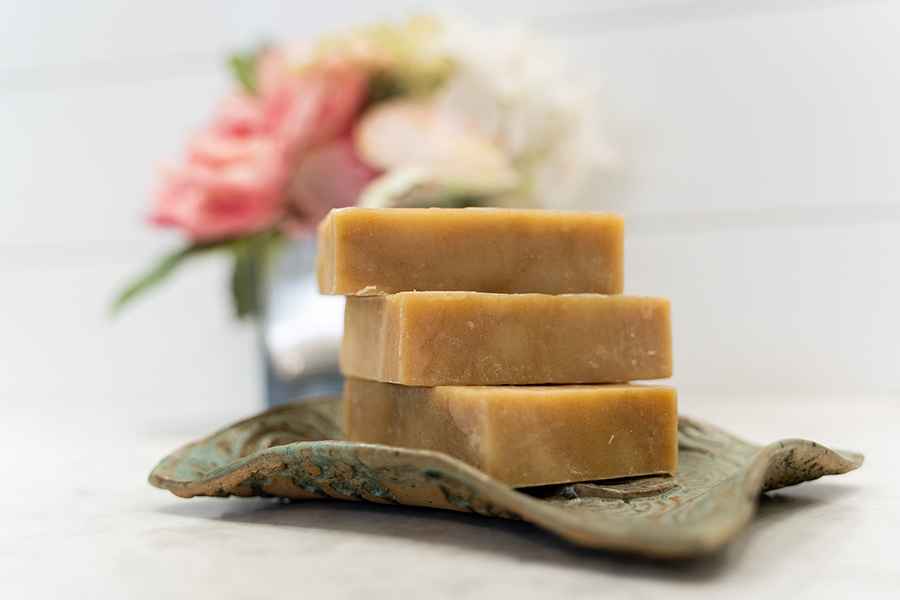 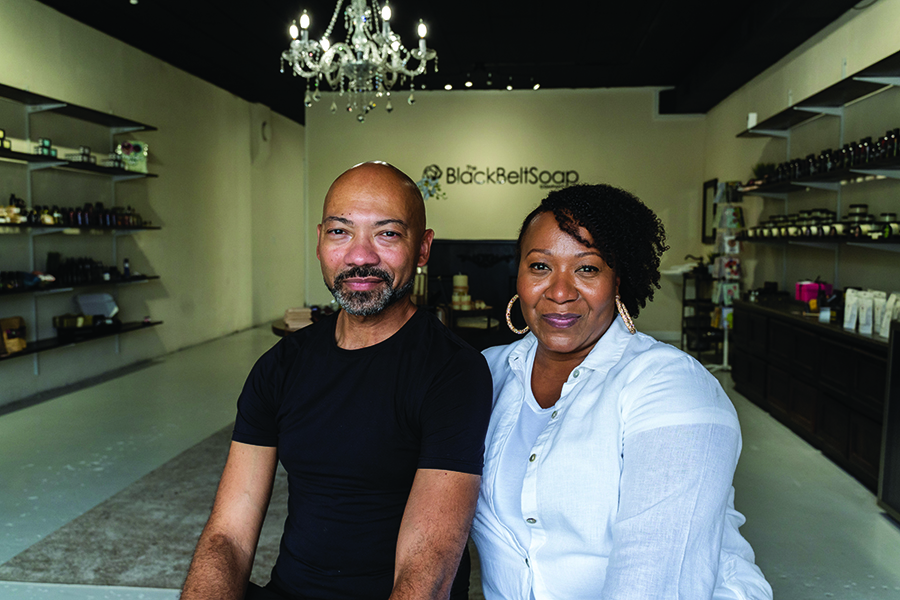 As you enter The Black Belt Soap Company at 416 East Market Street, you may be greeted by one of the two owners – Temeka Carter and Jeff Petrishen. Your gaze may go upward toward the two chandeliers that signal the formality of the shop. Jeff will tell you that they ordered the chandeliers from Amazon and then spent hours putting all the glass pieces together.  Or you may find yourself looking at the orderly shelves displaying soaps, body oils, scrubs and skin-care products, handmade with herbs such as mint or rosemary, or vegetables such as sweet potatoes or okra.

The store’s name is derived from the area of Alabama that Carter called home as a child. This strip of rich black topsoil across the center of the state called The Black Belt originally grew cotton – the logo of the shop bearing the region’s name.

Carter originally sold her soaps online (www. BlackBeltSoapCo.com), at craft fairs and at specialty shops in Greensboro. But as the business grew, and Carter’s and Petrishen’s house overflowed with boxes upon boxes of soaps and the ingredients for making them, they decided it was time for an actual brick-and-mortar. “We were grateful for the business growth, but initially did not want to manage a physical store,” says Carter. “We either needed to purchase a larger home or get a store, as the business was starting to take over the house. Local customers wanted to stop by and pick up orders or arrange a meet up. Scheduling became another job!” Overall, they are pleased with their decision, as their house is now a home again and customers can visit the store to shop at their leisure.

Diving into the creative endeavor of soap-making was part of Carter’s grieving process over the loss of her only child, Chloe, who passed in 2014 just before her seventh birthday from an undetectable blood clot that caused an embolic stroke. Working with her hands helped her process her feelings and put her energy into something that helps others. Each year Temeka celebrates Chloe’s birthday and has a license plate that bears her name. She freely talks about her, saying “Chloe is very much part of my life.”

Carter and Petrishen have been married for three years after a long-distance courtship between Greensboro and Boston. Petrishen has a background as an entrepreneur in the arts as both a painter and photographer, and is responsible for the business’s branding, such as product label design. For Petrishen, the transition from living and working in New York City and Boston has required some adjustment. “The pace is certainly different,” he says, “but I’ve met some really nice people since being here.”

In addition to running The Black Belt Soap Company with Petrishen, Carter is as multifaceted as the crystals that hang from the shop’s chandeliers. She holds a doctorate in rhetoric and composition from UNCG and teaches courses in African American studies, women’s studies and holistic wellness at N.C. A&T.  She recently returned to veganism and is currently studying to become an integrative health coach. Should you think Carter and Petrishen are a couple of workaholics, they know what travel and pleasure are all about. Each year they close the store for a winter break between Christmas and February 1st to enjoy a vacation. This year they are headed back to Bali for the second time, seeking product inspiration while indulging in an entire month of happiness for themselves.

Elizabeth Chiseri-Strater is an Professor Emeritus of English at UNCG. Her specialties include rhetoric and composition as well as literacy and ethnography. Temeka Carter is one of her former students.

Where to score vintage duds around the Gate City 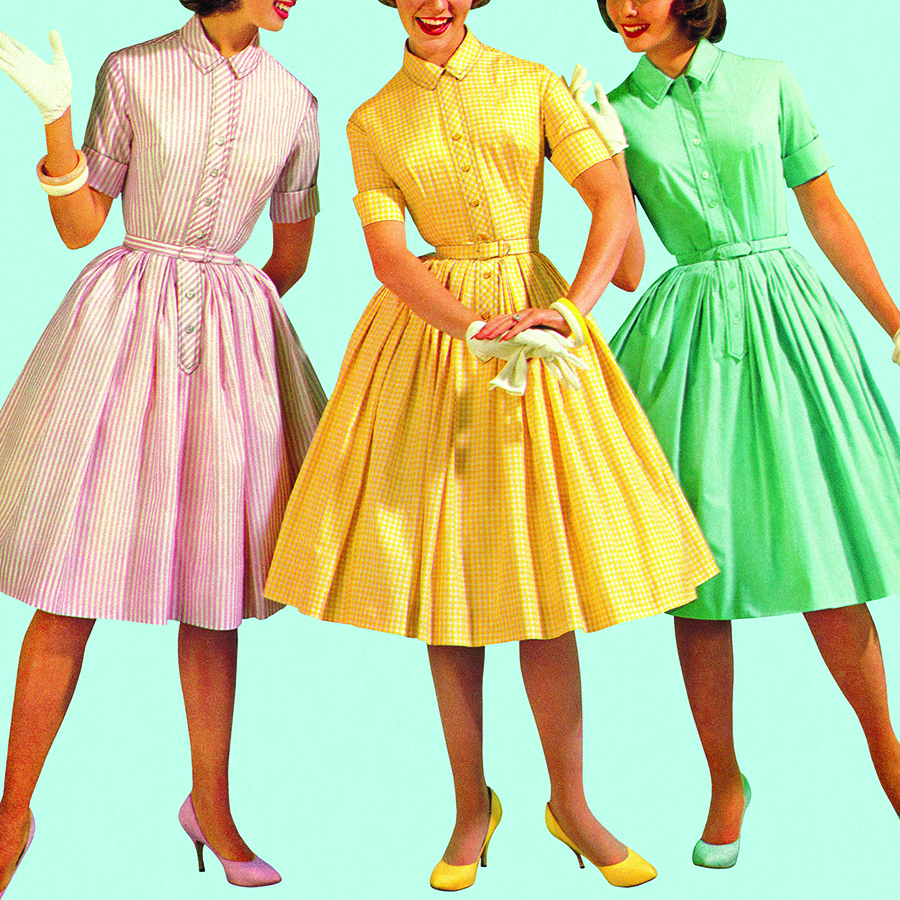 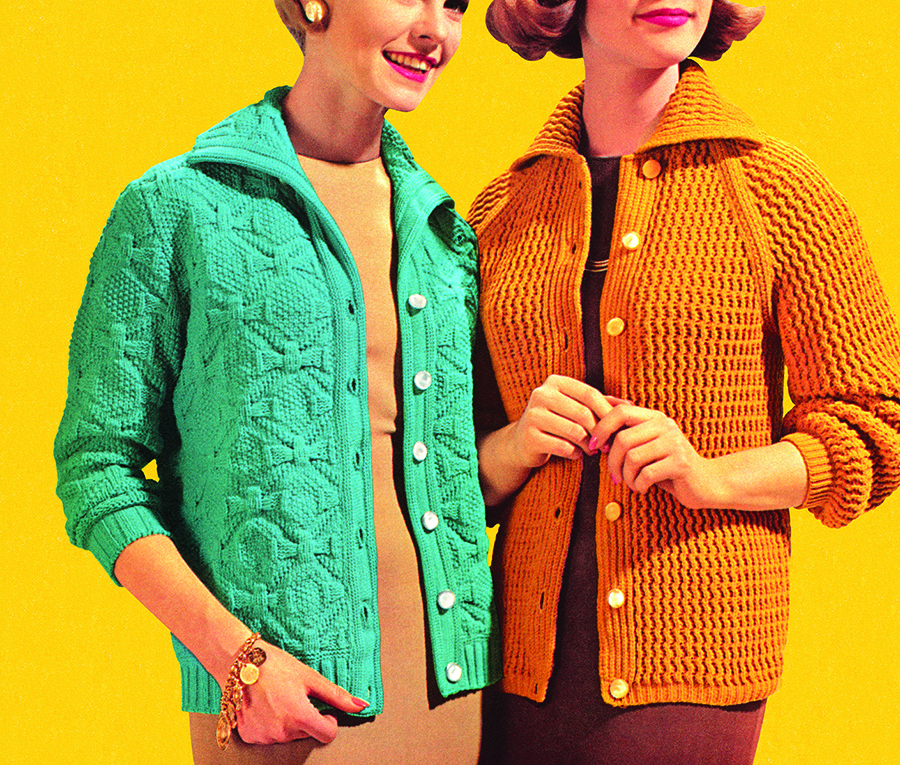 While vintage fashions were popular at the height of their own times, just like Britney, they love being the star of a good comeback. If you dig the garments of yore and want to give them a second chance at life, these Greensboro establishments might have just what you need to take your wardrobe from drab to vintage fab.

Vintage 2 Vogue: This downtown boutique offers an array of styles, from as early as the 1920s to the groovy designs of the 1970s and later. And even if you’re not a bride-to-be, check out the dizzying wedding-dress selection. Just because the dress has been loved-and-left doesn’t mean you will be. The thought of wearing someone else’s clothes leaves ya feeling itchy? Check out the collection of vintage-inspired looks. Info: vintagetovogue.net.

Design Archives: Located on South Elm Street, this veteran emporium outfits your body — and your home — with relics of the past. Find everything from baubles to bangles, from blazers to big and comfy hoodies that look like your Uncle John’s and remind you of his backyard barbecues. Nothing like wrapping yourself in nostalgia. Info: shopdesignarchives.com.

Standout Vintage: No one needs to know that your mom didn’t actually let you go to the 1990 Nirvana concert at The Millstone in Charlotte. Proudly sport the shirt you would have scored — and other vintage concert, sports and pop-culture tees — at this South Elm Street shop and pretend you were there. Pairs well with flannel and ripped jeans. Info: standoutvintage.com.

Revision Vintage: Whether you’re having visions of frolicking in a golden field in a vintage cottagecore frock or wheeling around Skateland USA in prime OG roller derby wear, this East Market Street shop has you covered, head to feet. Shop in-person or via Instagram for the grandest of grandmillennial fashions and decor. Info: instagram.com/revisionvtg.

Bargain Box: One of our O.Henry associates, who always looks snazzy and coordinated, claims this Junior League shop as her go-to “for classic, high-quality, designer suits and dresses that look brand new!” Value added if your grandma wore them to her own Junior League meetings in 1965. Info: juniorleagueofgreensboro.org/bargain-box.

Boxwood Antiques: Find 300 square feet dedicated to vintage, recycled and even new fashions at Eleanor Gray, situated inside this ginormous antique emporium in High Point. Winter is coming — prepare by donning a vintage fur to keep you warmer than a belly full of Mom’s pecan pie. And don’t forget to add some flair, aka vintage brooches. Maybe 37 or so. Info: facebook.com/boxwoodantiquemarket/.

Our Village Goods: This social media shop, owned by Lora Leininger, lists vintage clothing on its Instagram page. Browse sweaters, blouses and dresses with pants and skirts sprinkled in. Schedule a try-on sesh in her guest cottage and sit down to a cuppa tea and quiet. It’s like a lovely staycation, but with rad togs. Info: instagram.com/ourvillagegoods

Thrift Shops: There’s a reason an entire Macklemore & Ryan Lewis song is dedicated to the glory of thrift shops. While you may have to dig a little to weed out the vintage gems, with a little patience and persistence, you’ll be poppin’ tags. Hit up Triad Goodwill, Salvation Army and Hannah’s Bridge.

Estate and Garage Sales: Scope out those Saturday roadside signs because estate and yard sales alike are often stuffed with bargain vintage clothing. You know what they say. One man’s trash is another man’s treasured trappings.  — Cassie Bustamante

The Pleasures of LifeDepartment, November 2022