The worldly palate of Cameron Klass

Cameron Klass is a young woman forever on the move.

Hers is the kind of millennial wanderlust that has kept this 26-year-old crossing the globe over the past five years, a personal quest to learn about other cultures and countries from the grass-roots level, resulting in a passport that’s been stamped by at least two dozen different nations on four different continents. Her end game? Discovering food that not only sustains but also elevates the quality of human life.

The latest move from this peripatetic Greensboro native’s determination to help others comes in the form of a lifestyle cookbook filled with favorite recipes gathered from Klass’ world travels, promoting a naturally-sourced, whole-Earth approach to eating that works wonders for both body and soul, not to mention the health of the planet.

To hear her tell it, the 2011 Page High graduate had something of an awakening during her college junior year abroad in Reading, England, fueled by the month she spent at term’s end backpacking across Europe before her return to Ole Miss, where she was a marketing major and a member of the Kappa Kappa Gamma sorority.

Traveling on the cheap, sleeping in train stations and youth hostels, soaking up culture and food styles as she went, Cameron roamed from Barcelona to Florence to Croatia (“with many stops in between”), undergoing an epiphany in the process.

“That trip changed me,” she explains over an afternoon basil tea at Vida Pour Tea on State Street. “I’ve always been an independent person, someone who loved to camp with my family, enjoyed hiking and traveling on my own.” But after meeting so many different people and experiencing other cultures, something larger and more encompassing stirred awake in her. “I went home, resigned from the sorority and decided after graduation that I would travel as much as possible, learning from hands-on experiences.”

It helped to have a roommate, she adds, who was a nutrition major.

Her senior year at Ole Miss was spent deep-diving into food science and natural nutrition, learning the importance of cooking with fresh foods and reading ingredient labels. She also became a serious student of yoga — eventually earning certification as a teacher down the road. “I’d been a vegetarian since my freshman year. But learning more about the healing power of natural foods was eye-opening and exciting,” she reports. “Generally speaking, our convenient fast food culture promotes a very unhealthy and unstable lifestyle of eating. I wanted to be part of the solution to that.”

Eager to keep moving, during the summer of 2014, she landed a gig as an au pair for a family in Istanbul, Turkey. “My favorite times were days off when I went in search of local cuisine, inspired by the family cook, who made the most delicious vegetarian meals. On my own, I got to explore the city and its amazing markets and cultural sites, including mosques, meeting so many different types of people. It all opened my mind and broadened my outlook on life and left me hungry for more.”

Before returning home to Greensboro that Christmas, Cameron extended her travels to Poland, where, among other things, she visited the Auschwitz concentration camp and underwent yet another awakening. “That was such an emotional experience for me,” Klass says. “The lesson I took from that is that life is fragile and everything can change in an instant. The moment is now to change, to make your life better. I knew I had to keep going in my travels — to learn more.”

From there, she did a two-month stint working for a youth hostel in Valencia, Spain, followed by a month in Morocco, where she went on a camel trek across the desert, sleeping beneath the stars and sharing meals with nomadic families and picking up recipes as she went — including how to make Berber pizza by baking it in the sand. “I also discovered that the camel is my spirit animal. We’re both slow but steady and can cover a lot of ground with a smile on our faces. Also,” she adds with a laugh, “we’re both vegetarians.”

Upon her return to Greensboro, she resumed her yoga classes at Radiance Yoga and began teaching a 10-day class in detoxing the body with natural foods, cooking healthy meals for private clients — which funded the next chapter of her educational travels.

Five months in South America followed, beginning with the Galapagos Islands with her younger sister, Julia, before moving on to Ecuador, Peru, Bolivia and Colombia, exploring native cultures, eating in local markets, learning to cook the local dishes, visiting holy places, trekking in the Andes, camping on beaches. In Bolivia, she worked on a farm for two months, cooking, building plots, picking vegetables and harvesting coffee. She finished her time there by helping build a raft with Israeli backpackers and taking it down the Rio Verde River.

“If you are open to people,” she reflects, “they will open up to you. Everywhere I went I found people who were warm and receptive — eager to share whatever they had, including food and wisdom. It was deeply enriching.”

By the time she got home to Greensboro to do her 10-day detox programs and help out with her sister’s wedding, she knew it was only a matter of time until she returned to South America.

On the road again with her backpack, she worked at a youth hostel in Chile and trekked in the Argentinian high country (“They eat so much meat. I lived on peaches and bread.”) From there it was on to Europe to work at an organic veggie farm in Germany. “I loved that work — every morning in the garden, weeding and watching plants grow and cooking meals from food you have taken straight from the garden. There’s nothing healthier or more delicious than that.”

Her next step was Nepal for three months, where she trekked the Annapurna Circuit through the Himalayas and fell in love with the people and food of Nepal. She also did five days in a Buddhist monastery in Katmandu, a meditation course that further shaped her emerging consciousness. “The deep silence, the simple food — soup, bread — sitting on the floor, being with people who were so genuine and loving. It really did change my world.” A highlight was her visit to Lumbini, the birthplace of the Buddha.

Moving on to India, she took cooking classes and went to Varanasi, explored the Taj Mahal and visited Mathura, the birthplace of Krishna, continuing her pilgrimage to the sacred places where the Buddha became enlightened, first taught the dharma, and eventually died. Her travels took in the famous beach at Goa, the Ajanta caves, the teeming streets of Mumbai and Delhi.

Following another time home in Greensboro to teach cooking and study yoga, she returned to India to attend the International Yoga Festival at Rishikesh and took her yoga teacher training at Bhagsu, a small village where she heard the Dalai Lama speak several times and visited his temple. Upon returning to Bhagsu, where she continued cooking classes and yoga training — learning to make jewelry and dreamcatchers in the process — she began to formulate her own vision of a life of service in which she shared the wisdom of her travels through cooking and yoga.

On her way home, she stopped off in Spain to walk the famous Camino de Santiago, having made up her mind to start a business called Root to Rise. The name is taken from a common term in yoga in which one “grounds down through your feet and extends your arms over your head, lengthening your body and radiating energy.”

The name felt right, she adds, because her plan was to “ground down” after her nomadic travels in a place — Greensboro — where her own roots existed, with the purpose with helping the people of her home town “rise” to live their healthiest and fullest life.

“One important thing I’ve taken from all of my travels to such beautiful and amazing places is how close to the Earth people in those places live — simply and typically without the pressure of material life and a commercial culture that equates happiness with things you buy or own. They know where their food comes from, and that is almost sacred to them, a daily blessing.”

She pauses and smiles. “Basically, I learned that food is medicine for the body and soul. That it nourishes and heals — and affects everything you do in your life.”

And for this reason, Cameron Klass returned home with her mind set to put her worldly wisdom — and recipes — to use by integrating a healthy-living style of cooking, a weekly stall at the Greensboro Farmers Curb Market on Yanceyville Street, and a forthcoming cookbook that will feature recipes from her magical mystery tour of the planet.

Her longtime customers and yoga students are eager to get their hands on her Root to Rise cookbook, a project Klass envisions expanding into an interactive website with daily meditations, wellness information, food investigations, healthy-living news, grocery lists, in-season recipes and even travel tips.

“Everything in life follows a process of growing and learning,” she adds. “That’s why I am excited to share the wonderful things I’ve learned where my roots are.”

And we are glad to rise with her. 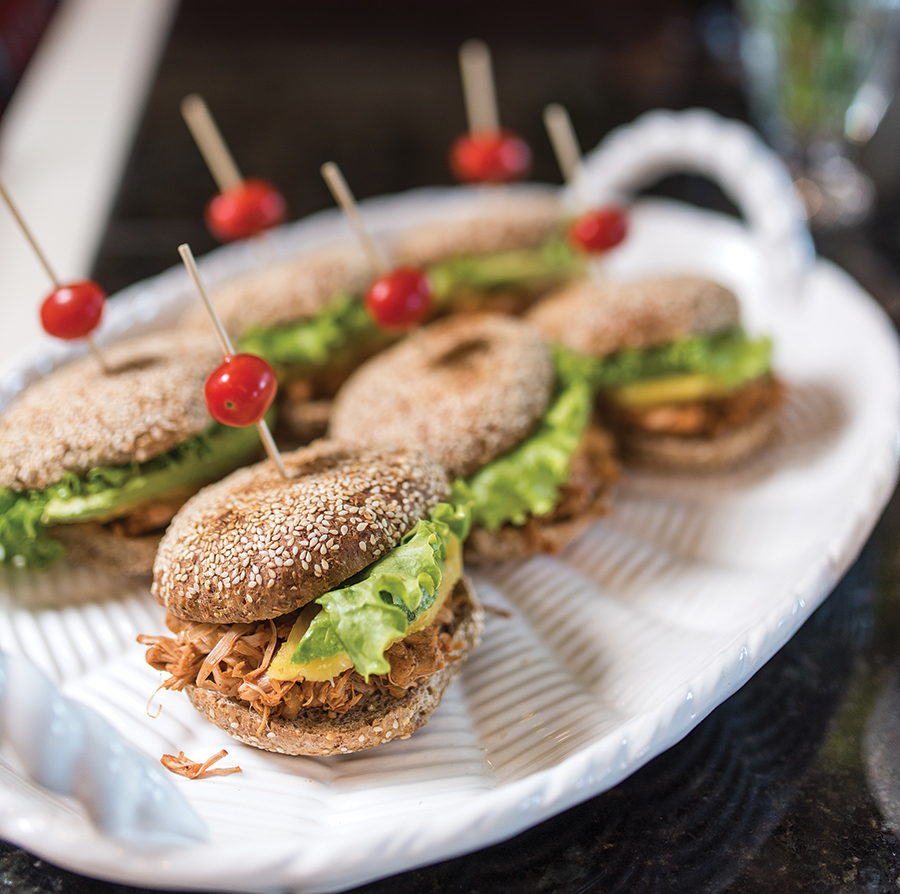 Heat 2 tbsp. olive oil over medium high heat, until hot but not smoking. Add the onion and garlic, sautéing for 5-7 minutes, until just beginning to brown. Add in the jackfruit, and remaining ingredients. Using a fork or potato masher, break the jackfruit into shreds. Add more water 1 tablespoon at a time if it appears dry. Lower the heat to medium and cook, uncovered, for 12-15 minutes. Stir occasionally to blend flavors.

While the jackfruit is simmering, toast the buns until golden brown. Cut the pineapple and set aside. Wash and pat dry the lettuce leaves. When the BBQ is ready, top on the buns, adding in pineapple slices, lettuce, and avocado slices. Enjoy!

Store leftover BBQ in the fridge for 2-4 days. 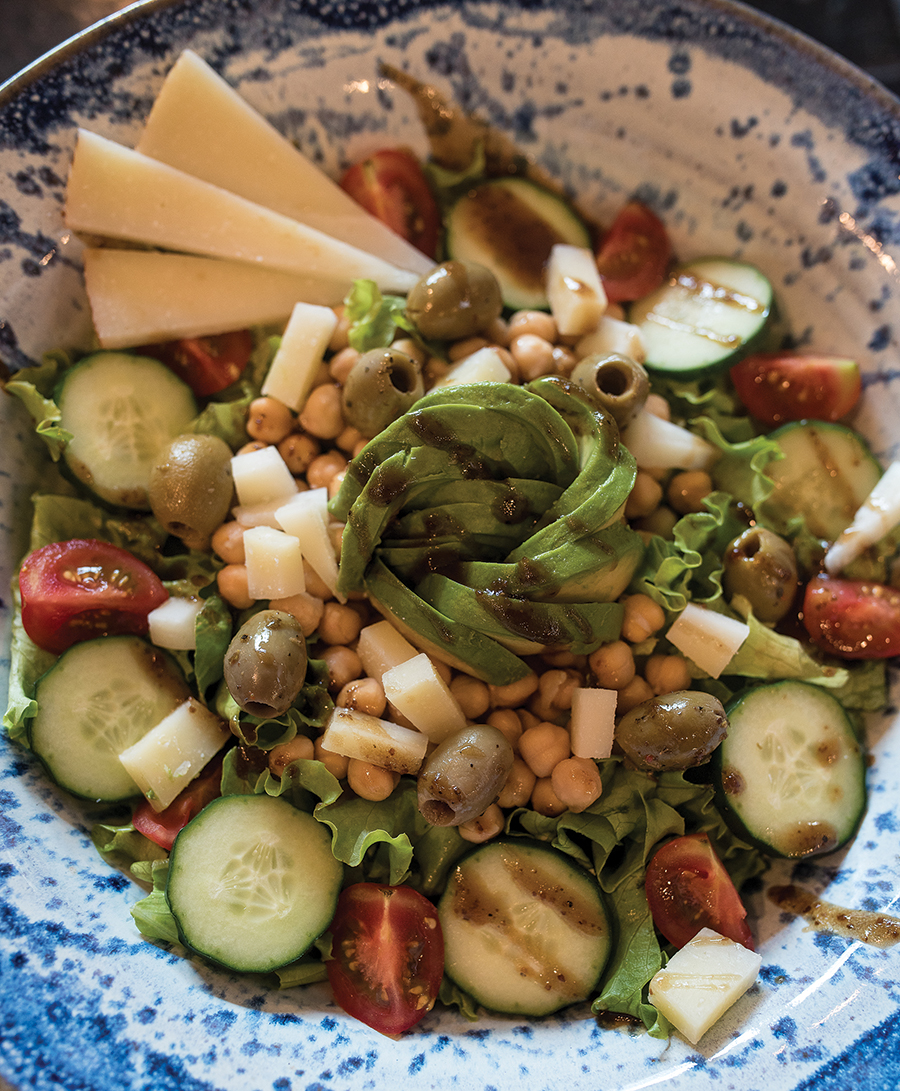 1 can chick-peas, rinsed and drained

Salt and pepper to taste

Divide the ingredients among four bowls and toss with the dressing. Enjoy!

Health tip: When consuming cheese, sheep and goat cheese is a better alternative for health and environmental purposes than cow cheese. Sheep cheese has high levels of conjugated linoleic acid (CLA), which reduces body fat, maintains muscle, and improves bone health. Goat cheese is more easily digested than other cheeses. And both sheep and goat farms create less of an impact on the Earth than cattle farms. They require less water, produce less waste and methane, and traditionally use more organic farming tactics.

Place all ingredients in a jar and shake well. Keeps on the counter for 2 weeks. 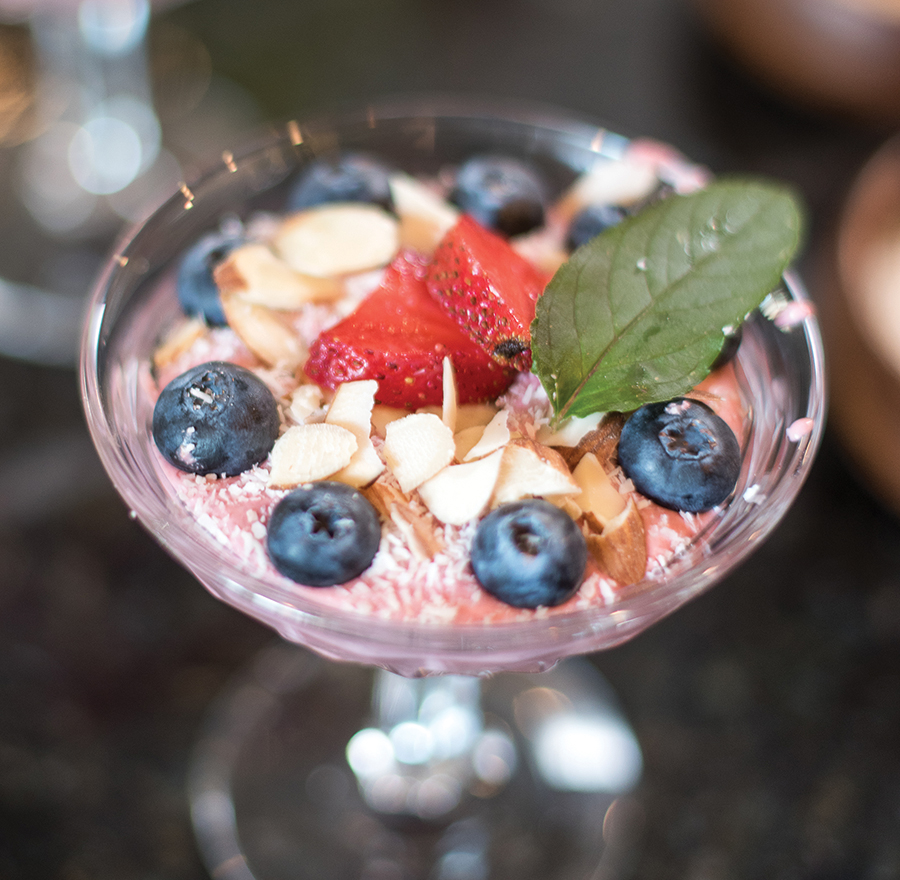 1 (15 ounce) can organic culinary coconut milk, full-fat (refrigerate the can 1 hour or more before opening)

Place the can of coconut milk in the refrigerator 1 hour or more prior to making the parfait.

When you open the can, use a spoon to place the thick white part that has accumulated on the top in a blender. Add 1/4 cup of the liquid from the can of coconut milk to the blender along with all other ingredients.

Blend until smooth, stopping to scrape the sides if needed. To alter the consistency add more ice to thicken or more liquid/water 1 tbsp. at a time to liquify.