The house I grew up in was one of a row of houses strung along a narrow river bottom like a string of beads. We were not allowed to play in the river because they washed coal in it, upstream. Its water ran deep and black between the mountains, which rose like walls on either side of us, rocky and thick with trees.

My mother came from the flat exotic eastern shore of Virginia, and swore that the mountains gave her migraine headaches. Mama was always lying down on the sofa, all dressed up. But there was no question that she loved my father, a mountain man she had chosen over the well-bred Arthur Banks of Richmond, “a fellow who went to the University of Virginia and never got over it,” according to Daddy. Mama suffered from ideas of aristocracy herself. Every night she would fix a nice supper for Daddy and me, then bathe and put on a fresh dress and high heels and her bright red lipstick, named “Fire and Ice,” and then sit in anxious dismay while the hour grew later and later, until Daddy finally left his dime-store and came home.

By that time the food had dried out to something crunchy and unrecognizable, so Mama would cry when she opened the oven door, but then Daddy would eat it all anyway, swearing it was the most delicious food he’d ever put in his mouth, staring hard at Mama all the while. Frequently my parents would then leave the table abruptly, feigning huge yawns and leaving me to turn out all the lights. I’d stomp around the house and do this resentfully, both horrified and thrilled at the thought of them upstairs behind their closed door.

I myself was in love with my best friend’s father, three houses down the road. Mr. Owens had huge dark soulful eyes, thick black hair, a mustache that dropped down on either side of his mouth, and the prettiest singing voice available. Every night after supper, he’d sit out in his garden by the river and play his guitar and sing for us and every other kid in the neighborhood, who’d gather around to listen.

Mr. Owens played songs like “Wayfaring Stranger” and “The Alabama Waltz.” He died the year we were thirteen, from an illness described as “romantic fever.” Though later I would learn that the first word was actually “rheumatic,” in my own mind it remained “romantic fever,” an illness I associated with those long summer evenings when my beloved Mr. Owens played the old sad songs while lightning bugs rose like stars from the misty weeds along the black river and right down the road — three houses away — my own parents were kissing like crazy as night came on. 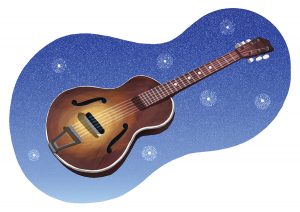 The link between love and death intensified when my MYF group (that’s Methodist Youth Fellowship) went to Myrtle Beach, where we encountered many exotic things such as pizza pie and Northern boys smoking cigarettes on the boardwalk. Our youth leader, who was majoring in drama at a church school, threw our cigarettes into the surf and led us back up onto the sandy porch of Mrs. Fickling’s Boardinghouse for an emergency lecture on Petting.

“A nice girl,” she said dramatically, “does not Pet. It is cruel to the boy to allow him to Pet, because he has no control over himself. He is just a boy. It is all up to the girl. If she allows the boy to Pet her, then he will become excited, and if he cannot find relief, then the poison will all back up into his organs causing pain — and sometimes — death!” She spat out the words.

We drew back in horror and fascination.

Of course it wasn’t long before I found myself in the place where I’d been headed all along: the front seat of a rusty old pickup, heading up a mountain on a dark gravel road with a wild older boy — let’s call him Wayne — whom I scarcely knew but had secretly adored for months. This was not the nice boy I’d been dating, the football star/student government leader who’d carried my books around from class to class all year and held my hand in study hall. My friends were all jealous of me for attracting such a nice boyfriend; even my mother approved. But, though he dutifully pressed his body against mine at dances in the gym whenever they played “The Twelfth of Never,” our song, it just wasn’t happening. That fiery hand did not clasp my vitals as it did in Jane Eyre whenever she encountered Mr. Rochester.

So I had seized my chance when Wayne asked me if I’d like to ride around sometime. “You bet!” I’d said so fast it startled him. “I’d love to!” Wayne was a big, slow-talking boy with long black hair that fell down into his handsome, sullen face. He wore a ring of keys on his belt and a pack of cigarettes rolled up in the sleeve of his T-shirt. He did not play sports. I admired his style as much as I admired his family — or lack of family, I should say, for he lived with his uncle in a trailer out near the county line. Wayne smoked, drank, and played in a band with grown-up men. He was always on the Absentee Hot List, and soon he’d be gone for good, headed off to Nashville with a shoebox full of songs.

We jolted up the rutted road through dense black woods. My mother would have died if she’d known where I was. But she didn’t. Nobody did.

I was determined to Pet with Wayne even if it killed him.

Finally we emerged onto a kind of dark, windy plateau, an abandoned strip mine set on top of the mountain. He drove right up to the edge, a sheer drop. I caught my breath. On the mountainside below us were a hundred coke ovens sending their fiery blasts like giant candles straight up into the sky. It was like the pit of hell itself, but beautiful. It was the most beautiful thing I’d ever seen. For some reason I started crying.

“Aw,” he said. He screwed the top off a mason jar and gave me a drink, which burned all the way down. “You know what?” He pulled me over toward him. He smelled like smoke, like alcohol, like the woods.

“What?” I said into the sleeve of his blue jean jacket

“They was a boy killed in one of them ovens last month — fell in, or throwed himself in, nobody ever did know which.”

“Was there?” I scooted closer.

“Yep, it was a boy from over on Paw Paw, had a wife and two little babies. Gone in the twinkling of a eye, just like it says in the Bible.” He snapped his fingers. “Right down there,” he said into my hair.

“That’s awful.” I shuddered, turning up my face for his kiss, while below us the coke ovens burned like a hundred red fountains of death and I felt the fiery hand clutch my vitals for good.