Michael Clapp is living what he calls “the poetics of architecture.” His vision, expressed in a family barn in the countryside that is his new home, reveals what is extraordinary in the ordinary.

Clapp, a practicing architect and a lecturer in the School of Architecture at UNC-Charlotte, is wiry and slim, dressed in monotones of gray: jeans, sweater, shirt and scarf. Only his tan-colored shoes differ; they are neatly polished and laced.

In describing the project located on a Whitsett farm, he compares his architecture to poetry. As poetry lovers understand, taut writing must reveal, not conceal, essences.

Much like poetry, effective architecture must also be deliberately devised, revised and constructed. Nothing extraneous, nothing left to chance. Multiple interpretations, however, are both expected and welcome.

Now on rural land that has long been in his family, Clapp grew up in the Adams Farm community in southwest Greensboro. He and his partner, Méric Ozgen, moved into their barn conversion in December last year. The barn always spoke to him.

“For years, I saw it and thought there was potential to create a really wonderful space.” 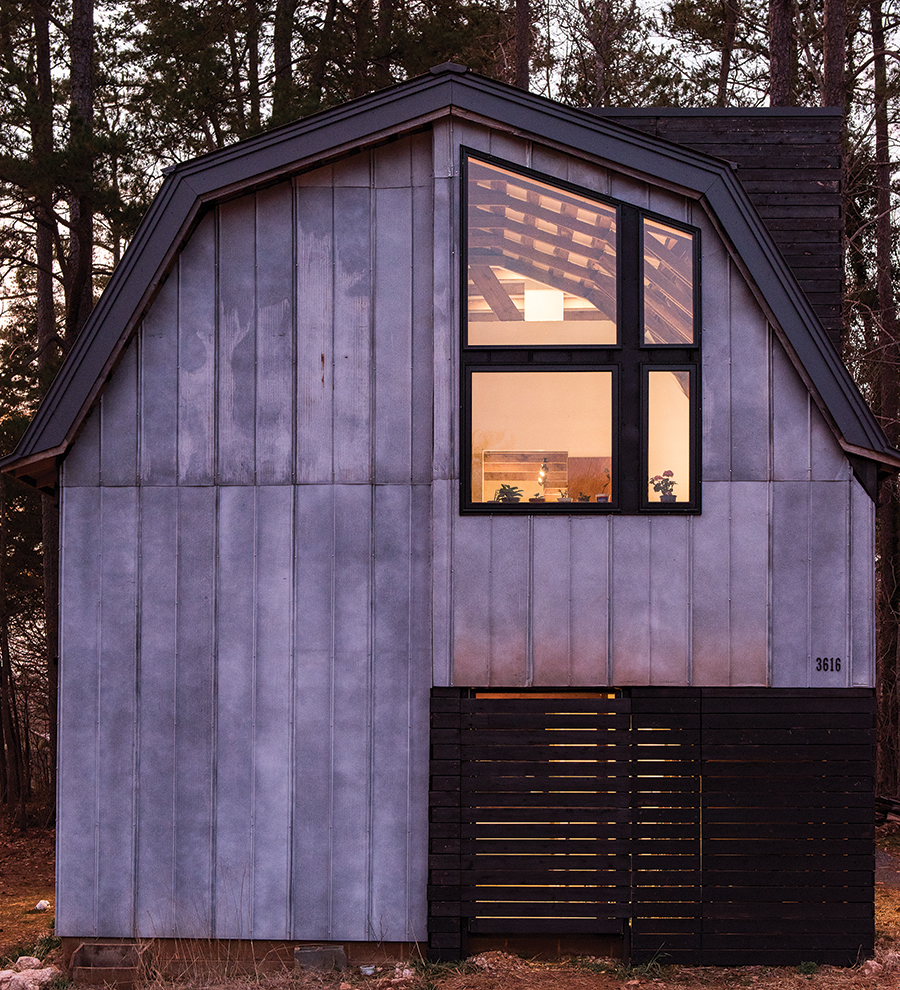 Work on the structure began in 2017, the year Clapp launched his practice, Schemata Studio, after finishing graduate school. The barn functions as both home and studio with 940 square feet of heated space — there is additional unheated footage on the ground level, which features a laundry room, outdoor shower, storage and a garage. It has been reinvented yet not. It still possesses its barn essence, honest and rough-hewn. As Clapp knew it must: “It retains vestiges of the past.”

“My grandparents lived next door,” he explains, gray gravel crunching beneath the impeccable shoes. The barn is adjacent to his grandparents’ traditional clapboard farmhouse. And while the farmhouse is a rental now, Clapp’s older sister may consider returning to what could grow into a small family compound. At this, he smiles.

A cabin across the road from the barn was restored to his father’s specifications — another story altogether — Clapp says as he circles the barn’s exterior. He points out the outdoor shower and space where animals and farm equipment were once kept; they reveal the history and yes, even the granular poetics of the place.

The barn does a curious thing. It disappears. UPS drivers miss it constantly, Clapp explains. Brown trucks whizz past the gravel drive, which wends by a bisected felled tree, a pine lost in a winter storm, which he laughingly calls “the gate.”

The barn hides in plain sight, with charred board siding, metal roof and a separate shed, so organically conceived it blends into the winter’s landscape. The exterior form is a combination, Clapp says, of the original tin panels and oak plank. The rain screen, an architectural modification to the original barn, is made of charred slat siding, a Japanese technique, not stained, he qualifies. The charring technique is redolent, too, recalling a family home that was lost in a fire.

So, altered, the barn echoes the past but it is changed. It is of the place, yet not. Clapp will explain later; this, too, concerns resonance. 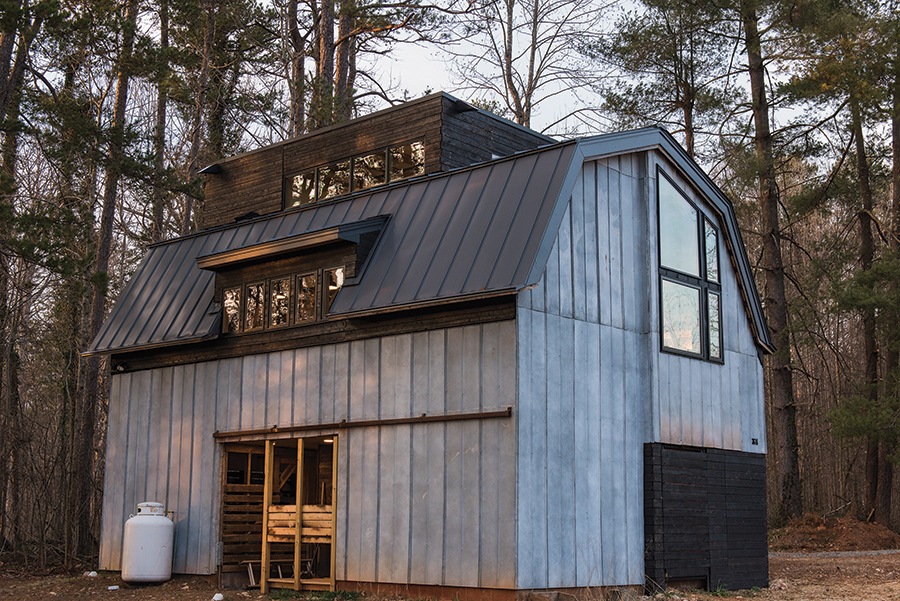 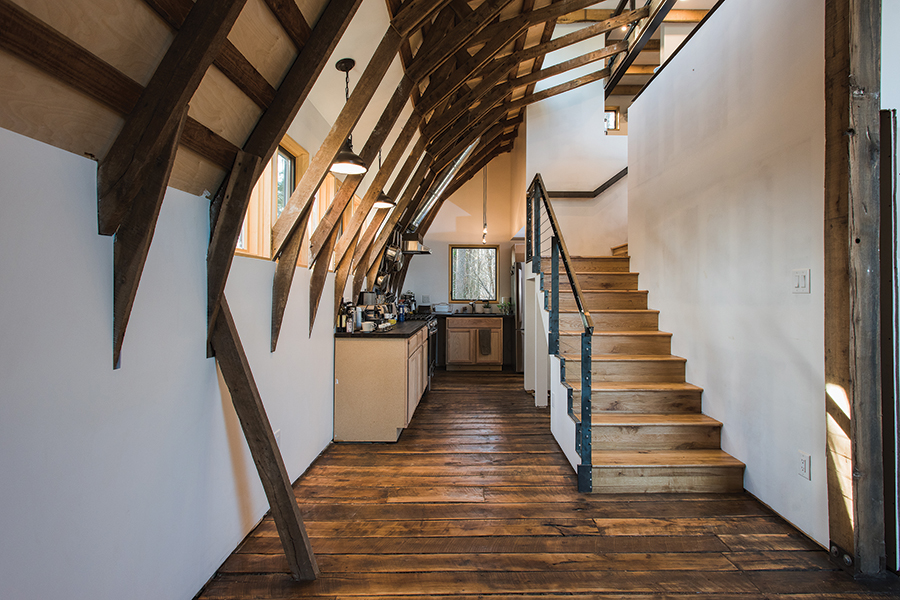 There are small innovations to be seen from the very first glimpse. The large front door, wood and metal-edged, has a load-bearing wheel on the inside that is both quirky and industrial-chic.

Stairs lead up from the entry, through a grid-like exposure of rough beams. Clapp says code modifications were made to the stair treads, in order to retain the original wood yet make them compliant. The original treads, he says, “are articulated with new rough cut oak.”

There is the undeniable romance of hefty timber beams, raw edges and decades-old wood.

Where once there was a hayloft, there is now work and living space. Overhead, the gambrel roof is a show-stopper, a humbler version of a vaulted ceiling in a European cathedral. The beams were cleaned, faced with plywood, and serve as the most impressive feature, the one that no doubt inspired everything. Windows artfully sliced into the upper walls provide light yet recede, more generous than traditional barns allow.

Clapp discusses the way “the new space was grafted” onto the old. He mentions palimpsest, usually defined as discernible traces of writing, as on a pad, or it can mean something that has been altered yet bears the traces of its earlier form.

“We are standing on the original floor and under the gambrel roof structure,” Clapp says, his blue eyes narrowing in emphasis. “All original,” he adds, right down to the insects they had to shoo away. “We had to vacuum off the cobwebs and dirt dauber nests. We seemed to find new ones every day.”

Clapp points out that the revealed oak rafters are 24 inches on center. “It gives a harmonious feel. The vernacular resonates towards that end.”

He also mentions pondering the finer points of a baseboard finish only feet from where his desk is, neatly stacked with multidimensional studies. Clapp anticipates growing the business, and requiring another, separate location. Then he and Ozgen will claim the nearly 1,000 square feet of the barn as their living space only.

As he makes an espresso on the stovetop in the L-shaped (surprisingly spacious and workable) kitchen, he sets cups and cream onto a dark-stained butcher block counter. 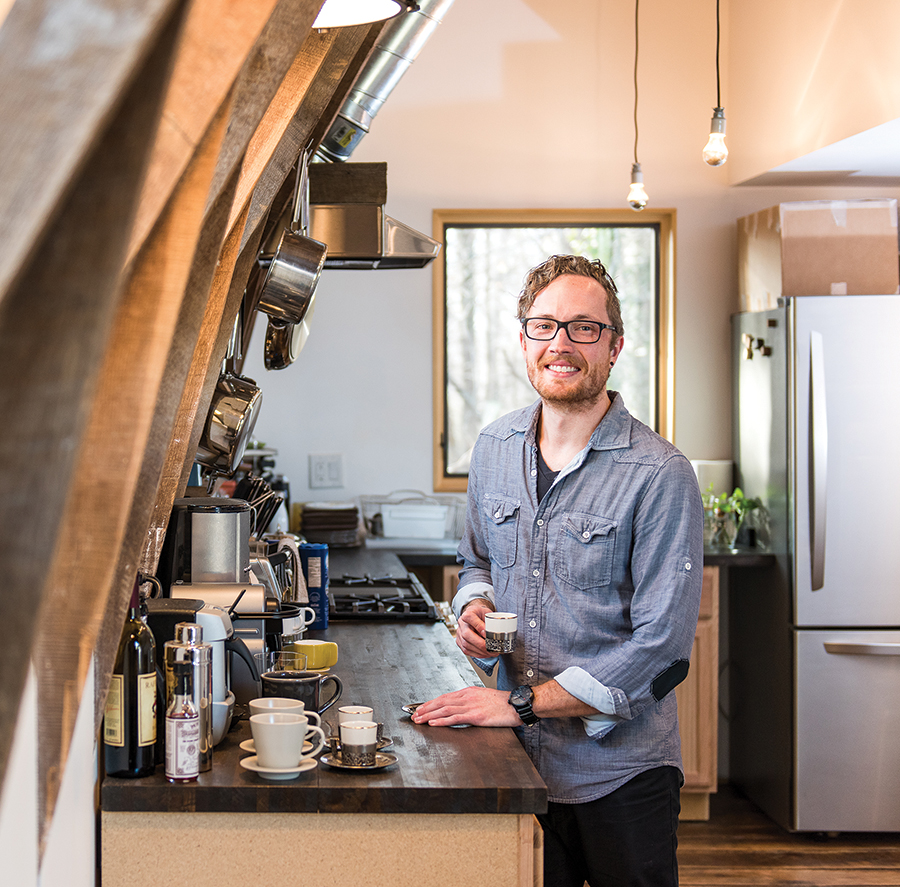 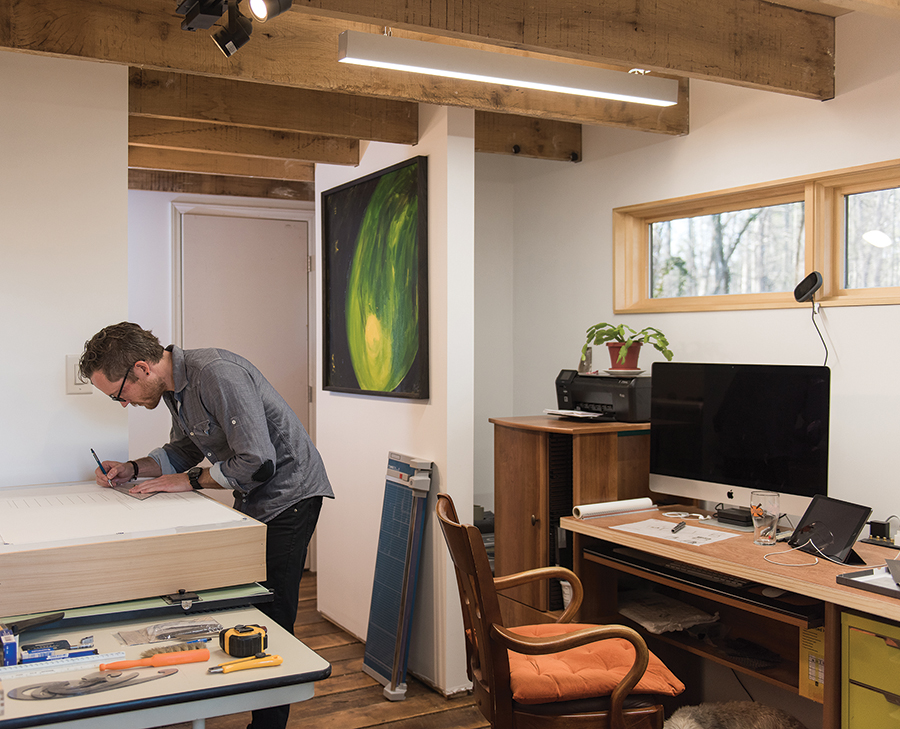 Both Clapp and Ozgen are avid cooks who did not want to scrimp on the kitchen, which he admits appeared smaller on paper before being built. So the fridge was carefully deliberated — they eschewed French-style doors to maximize space.

There are three levels, the third comprising a sleeping loft. The loft contains a bathroom, with exposed copper pipes in the industrial-styled tiled shower. The bedroom features a Juliet balcony across from the bed, providing a tree-filled view. There are evergreens and deciduous trees, whose stark branches will soon leaf out, filling the frame in a profusion of green like an animated painting.

The interior is largely complete with some finishing touches still in process. Clapp points out that furniture is on order but not yet arrived. Two camp chairs provide seating near the office where the couple are still testing various details within the space and revising ideas. There is the baseboard, for example. He points to a raised metal lip along the baseboard behind one of the camp chairs. The original idea, he explains, for the entire floor. The more practical option, he says, is one being tested on another wall called a shadow line — which appears to delineate the base of the wall without complicating construction and housekeeping.

The couple, both in their 30s, are the occupants and also the makers. They are doing the work largely themselves. Clapp sprinkles conversation with ideas about living minimally, of craft, of intention. There is discovery, tweaking and refinement all ongoing as the makers explore, as they have been, since taking occupancy last December.

He discusses conservation versus preservation, saying conservation focuses on retaining the past, preserving the flavor of the place. “Done in a way that can be sensible.” Clapp uses a professorial term: “resonant dwelling.” He has dubbed the barn project that.

“Farm architecture is what you build when you can’t afford to get it wrong,” N.C. architect Frank Harmon once commented. It is a quote found on Clapp’s website, though Clapp received his architectural training at the University of Tennessee and Harvard, where he also met Ozgen. So what if the barn was once a humble outbuilding on a farm? In the architectural context, Clapp says, good design can lend identity and a sense of place.

Only briefly did he doubt his vision. 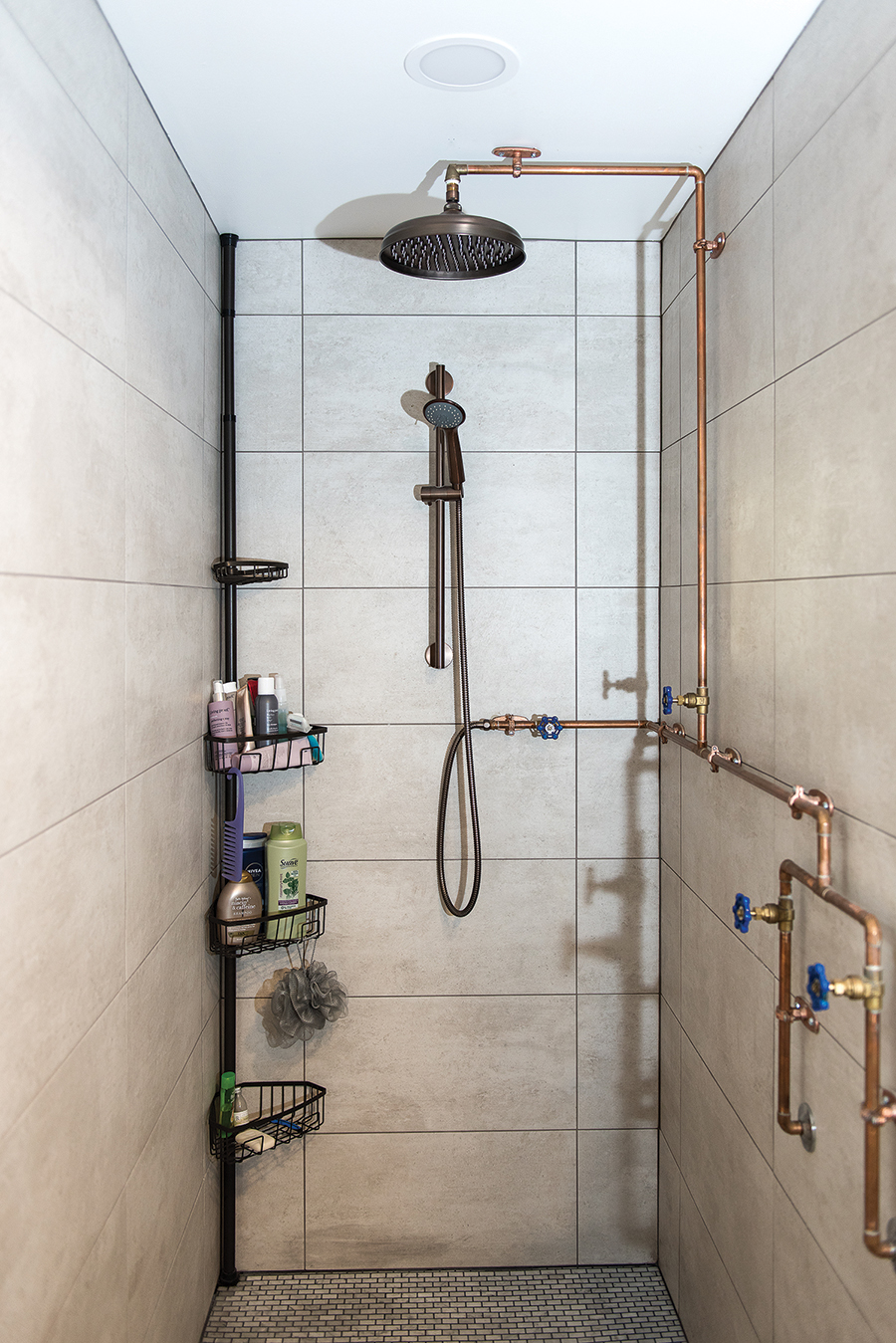 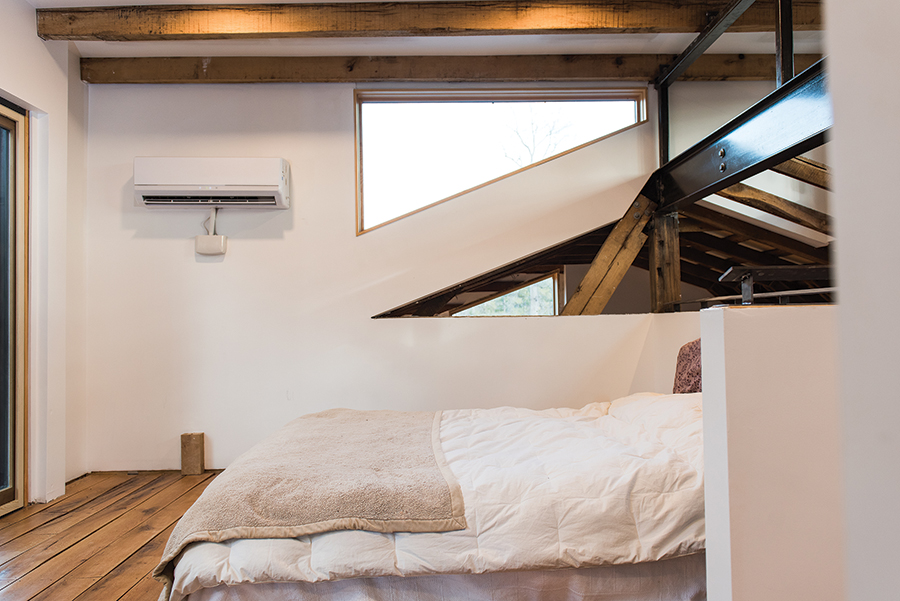 As he recalls, there was a particular memory before the project began. It occurred after they cleared out all the detritus and items stored in the barn. For the first time, he could see the barn he had long admired emptied out.

“There was a weird moment,” Clapp confesses. “The essence of the space was exposed.”

It seemed larger. And he recalls feeling sudden reservation about altering it at all, thinking, “Oh, no, we’re going to start breaking this space down and compartmentalizing it. But once fully realized, the vision enhanced the existing space. We retained certain aspects of the original structure, so you could tell the story.”

Later, Clapp shows some of his elaborate sketches. Three days a week he travels to UNC-Charlotte, where he lectures on architecture. The remaining days, he works here in Whitsett, occupying the project nearest to his heart.

The family dog, Kar, snuggles into a bed near his desk, also reporting for work. “Kar,” he explains, “is the Turkish word for snow.” Ozgen is Turkish.

She works with Gensler, a Raleigh architectural firm but also is involved with Schemata, something Clapp long contemplated opening.

“A schema is an organizational tool that our minds use to understand certain situations. Schemata, as its plural form in Greek, help bridge between images and concepts to facilitate that understanding. We seek to challenge traditional ways of thinking about architecture and space to create pleasing new forms of occupations and residences.”

Standing on the ground level, which still has relics of its farm-past, Clapp says they are still pondering how the unfinished footage may one day be used. But he very much likes the fact that the old feed bins and stalls where his grandparents kept a pony and other animals are visible. Palimpsest personified. 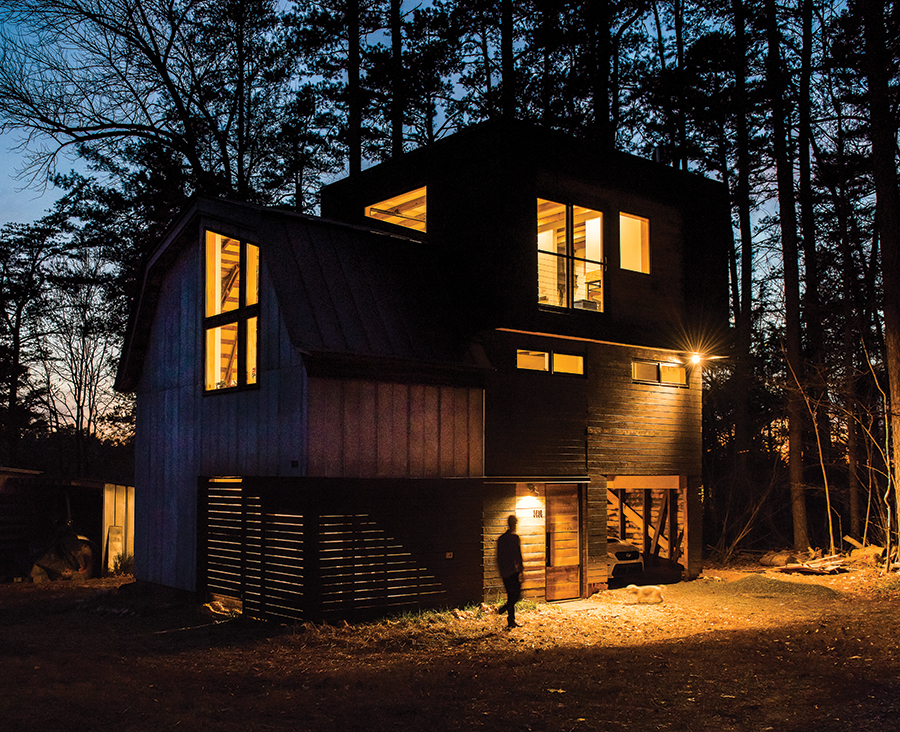 He adds that the “Amazon-ized society and culture have come to equate the lowest price with the best value but this couldn’t be further from the truth . . . “I like to ask: ‘When’s the last time you were truly delighted by something?’ Architecture and the space that is designed within and around it has the ability to present that.”

The grounds will change, too. Come spring, the couple envisions there will be planting in the field outside, just as there once was. Clapp says they are discussing planting pecans and mulberries. “A true Turkish breakfast will have mulberry jam,” something that he says Ozgen anticipates. The delicate mulberries are shaken from the branches, then caught in linen sheets before they hit the ground and are bruised, he explains.

Part of the poetics of architecture concern how man relates to the land. Clapp honors the place where his father and uncle came of age, and where his grandparents farmed.

“Christmas Day, we opened one of the few remaining canned jars of green beans from my grandmother,” he recalls. “She also made fresh apple pies,” he adds.

So inasmuch as Clapp is a philosopher, he too, is also a “maker,” just as he says.

Cynthia Adams is a contributing editor to O.Henry. Many of her happiest childhood moments were spent playing inside a Cabarrus County barn, observing life from the hayloft.

From Here to Ubiquity

Barn conversions are not uncommon in New England and certainly the U.K. But in the South, like the barn of my childhood, many have been lost, erased from the landscape by the ravages of time or a developer’s bulldozer. Ours fell to the latter.

Mike Cowhig is a longtime community planner with the City of Greensboro who works historic districts and guides the Historic Preservation Commission. He and Benjamin Briggs, the head of Preservation Greensboro, pondered how many barn conversions exist in Greensboro. Neither possesses an inventory of the county’s barns.

In an email, they mention the Carlson Farms barn conversion (part of the Greensboro Country Club), Stancil Farm, and Starlight Meadow, which is also near Whitsett. Then Briggs’ emails a quip about how such facilities often pop up and disappear, joking that anyone with a cow, a barn, and a golf cart is suddenly a wedding venue. There is something egalitarian about a barn, after all. — C.A.