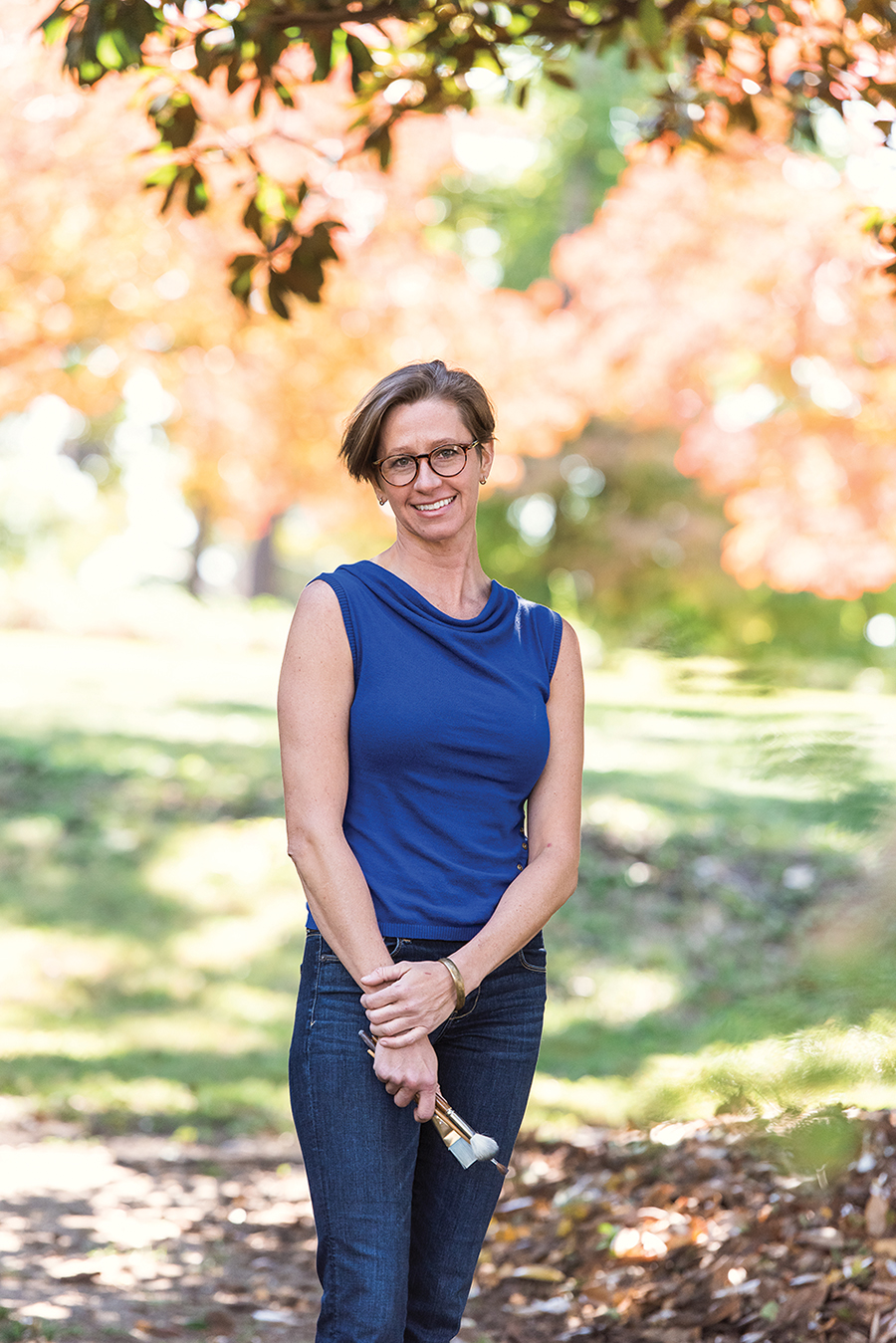 When artist Susan Harrell first toured the languishing Victorian in Greensboro’s historic Dunleath, she beheld a towering, purple two-story trimmed out in cream. And that purple? “The paint was coming off in ribbons,” she says ruefully. The house soon became the artist’s agony and ecstasy.

A partial renovation had been halted before completion and it sat empty, she explains with a frown conveying the unsaid. Then in foreclosure, it was on the edge of becoming derelict. “There were squatters in the house.”

Undaunted, she jokingly dubbed it “The Purple Palace,” and made an offer.

And so began a true May/December relationship, given Harrell was only 34 at the time. The house was almost a century older than its new owner. Yet she unreservedly loved her Purple Palace.

The interior, too, was a confusion of ambitious ideas left unfinished.

By best estimates, the house is easily 122 years old, but darned if it doesn’t look great for its age today, thanks to an artist’s touch, and no small amount of dedicated labor, creative decisions and persistence.

(Pinpointing the exact age is tricky. According to the National Register nomination, the house dates to 1905. Greensboro city planner and historian Mike Cowhig, who works with the Greensboro Historical Commission, believes the property is at least five years older.) 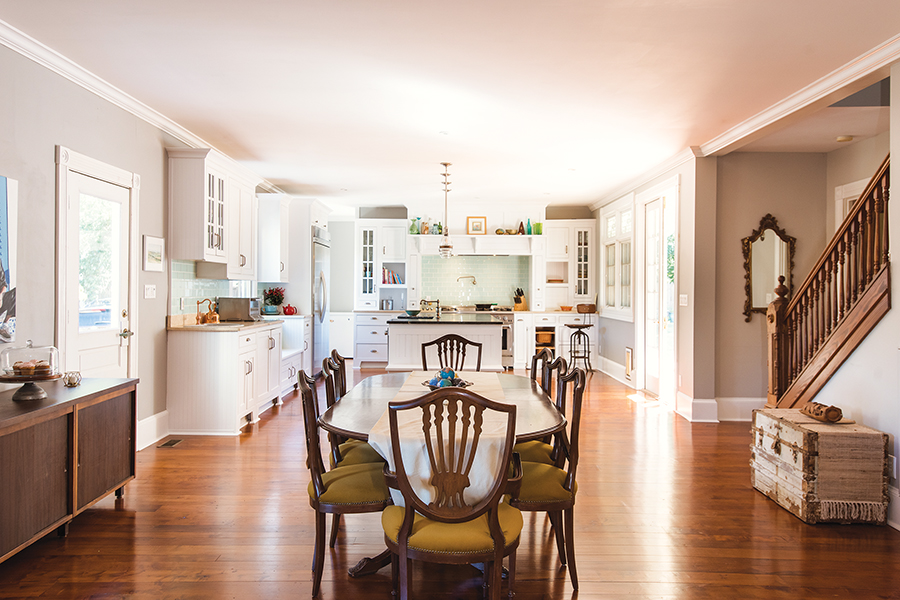 As a full-time artist and avid DIYer who never met a power tool she didn’t like, Harrell immediately recognized the problem causing the peeling paint and knew how to solve it. The exterior had been sprayed, she says, twisting her mouth.

“The siding is cedar, and you really need to brush it on.”

She painstakingly scraped the purple off, doing much of the work herself, renting a scissor lift, given the vertiginous height of the house.

“I had experience with lifts because I have done murals.”  (Three of Harrell’s original murals, including a restoration, are in her hometown of Asheboro.)

And The Purple Palace would require all her gifts — both her artistic and construction abilities. And it would change her life.

Although the prior owners had made some big-ticket improvements, wiring and reworking plaster walls with sheetrock, they miscalculated costly things like a posh kitchen. Hence the foreclosure.

“They spent $900 on cabinet pulls,” Harrell explains, shaking her head. Yet there was no backsplash in the mostly-completed kitchen.

And considerable cash had been outlaid on maple flooring in the entry and main area, juxtaposed against rooms with original red oak. She throws up her hands. She stored and saved boards of the original oak for reuse or resale. After all, the upstairs renovation still awaits.

Harrell, who loves millwork and carpentry, replaced a lot of wood, including a rotting rear porch. Inside, she removed new columns that cut up the main rooms.

She changed the interior crazy quilt color scheme, calming and unifying spaces with quieter tones. After Harrell’s cosmetic touches, including a calmer color palate inside and out, the onetime home to squatters was no longer a laughing matter.

Goodbye, Purple Palace. Or “Frankenhouse,” as she started calling it. 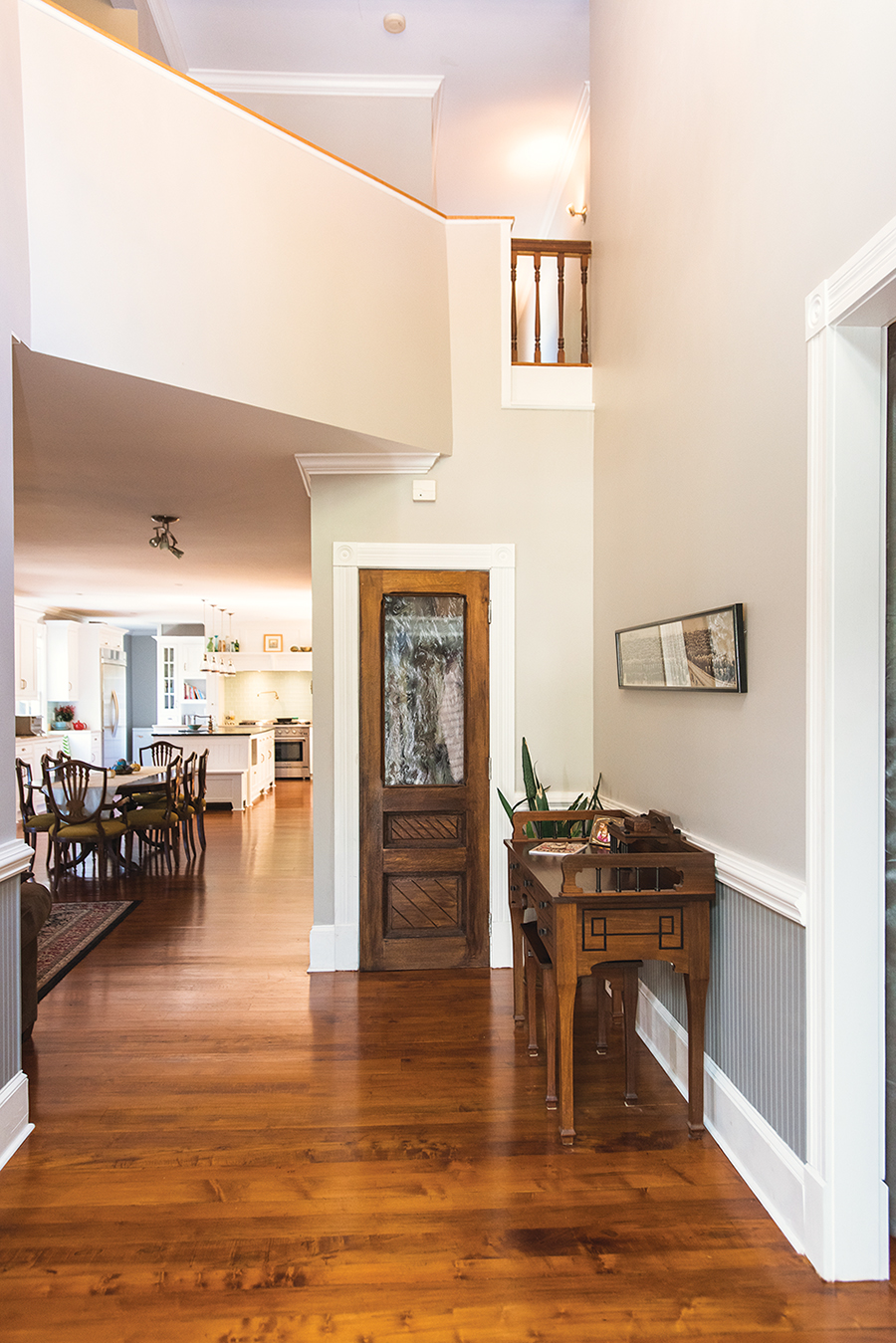 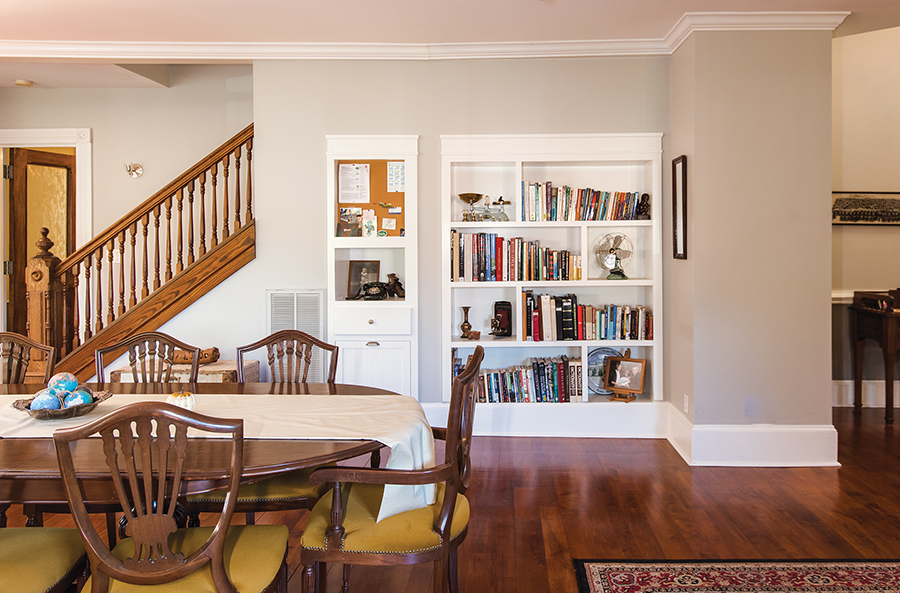 Over the span of a century, the sizable house has led many lives, including one as a child care facility. “Maybe once a duplex, too,” Harrell guesses. “It had a parking lot in the rear.” The original staircase and entrance hall had been moved, creating an open floor plan. But an artist requires wall space for artwork.

Harrell’s plan is to eventually restore many of the original walls, truer to the house’s vintage. “There was no definition for the living room,” she laments.

Her next project? Designing a period appropriate fireplace in what is now a dining area, installing gas logs. Designed for coal, she points out, the house’s many period fireplaces were “unusually small.” On a practical level, gas logs will help with heating the 3,200 square feet of space.

Her contractor brother, “who could do things out of my realm,” is now based in Blowing Rock, managing the building of high-end homes. Having helped him on projects, she had a vision for what the restoration needed.

She has been replicating the original historic door trim, milling it herself. (It’s often impossible to find, she points out.) Harrell owns three table saws, two drill presses, planers and jigsaws, which she regularly uses.

At last, Harrell grins, she has a shop for her many tools. “I’ve done a lot of reno work. I built a loft in Asheboro.”

Is there anything she doesn’t do?

She laughs. Harrell admits she cannot make more time in a day, in order to both create artwork and do restoration work. Meantime, Harrell’s taking a break from renovation for her art’s sake.

Her greatest passion — art — is something she discovered a bit late, while in her early 20s. On her way to becoming an interior designer at Rockingham Community College, she uncovered an affinity for drawing and painting.

“I would go to a local public library and look at the art section,” Harrell explains. “I ended up in the Old Masters and decided to replicate them.” Her first effort was duplicating the legendary Mona Lisa. She discovered she had a good eye for color, and kept going.

“A hare-brained idea,” she admits modestly.

“After a few (replications), my family started noticing what I was doing. My mom has always been my biggest fan and kept encouraging me.”

All five Harrell siblings are creative. Most of them are musical. 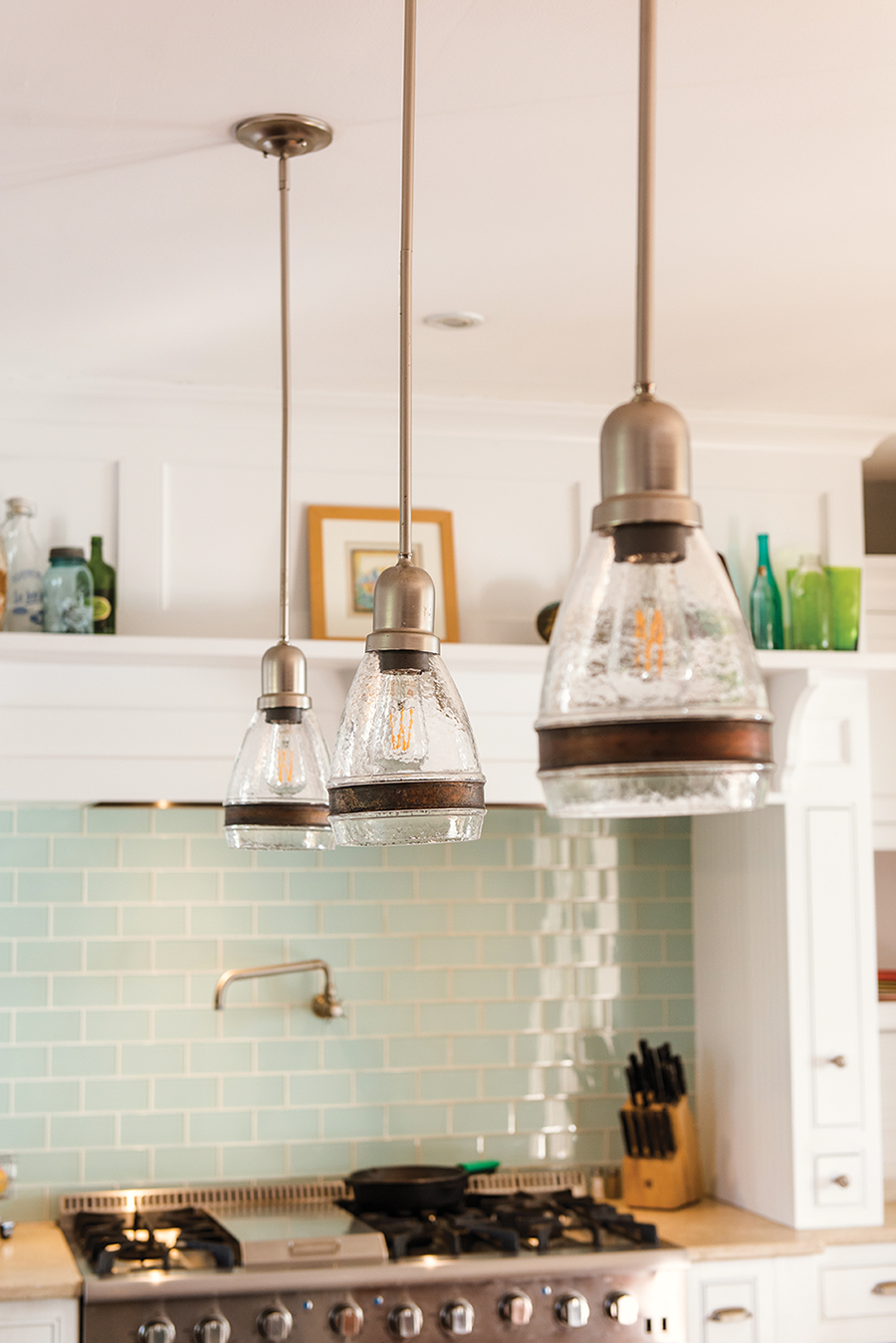 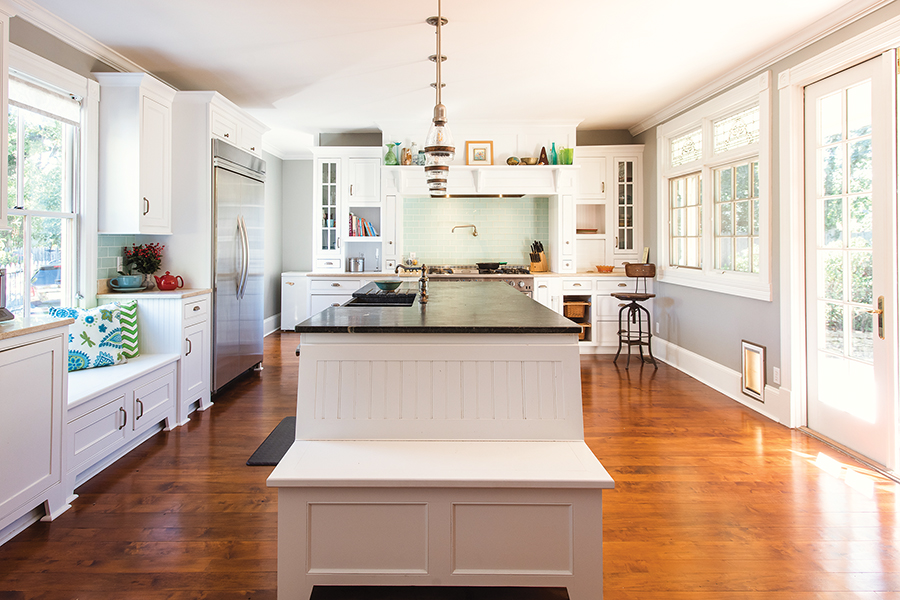 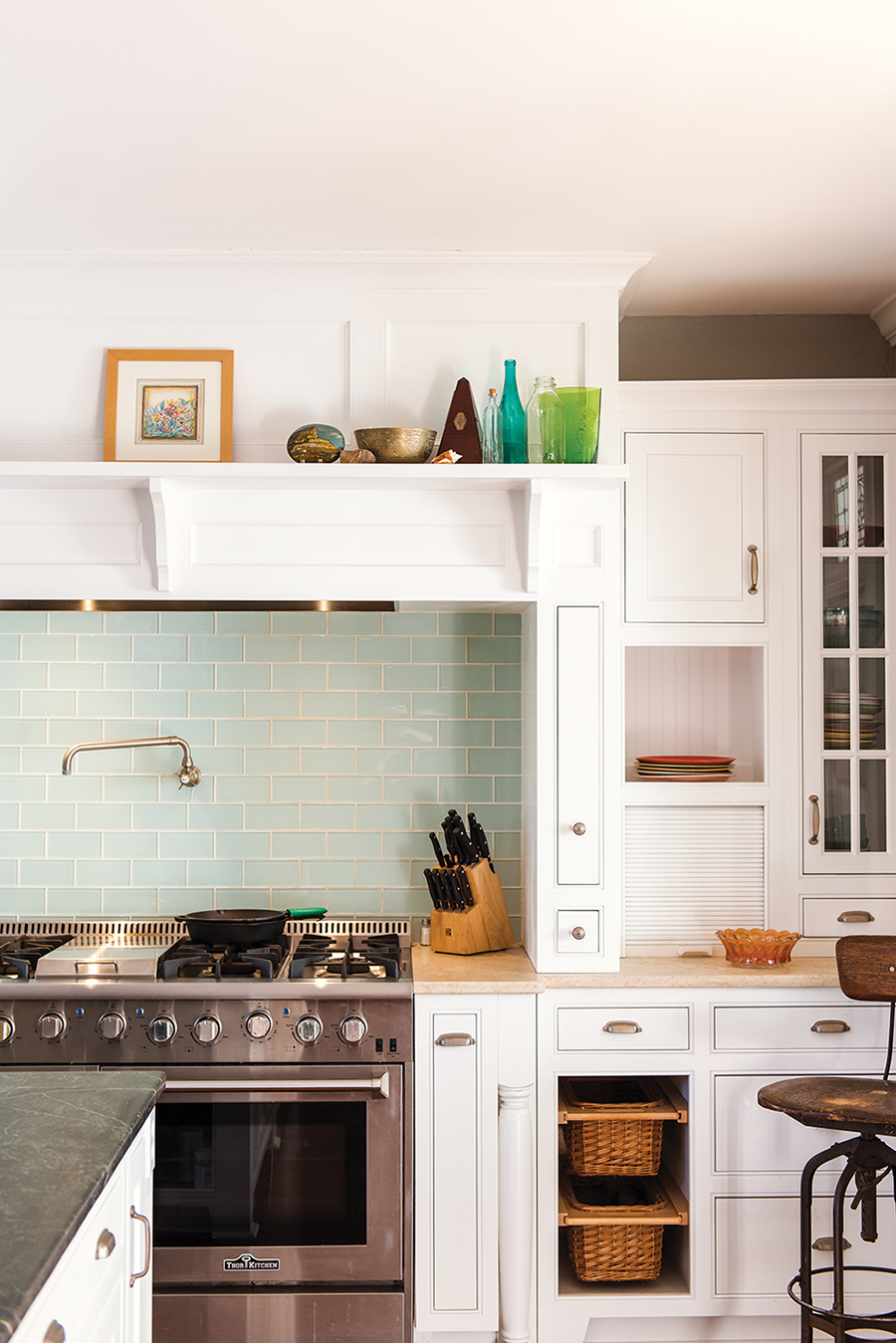 “They all have their own weird little super power,” she says with open admiration. One brother builds high performance race car engines, netting him “multiple world records.”

Is this why she, too, is fearlessly creative? “Maybe so,” Harrell answers.

Art resonated with her more than interior design. “In the process of getting exposed to more of the arts, that’s when I started getting more interested in it,” she explains. However, she has no art school background. “I’m 100 percent self-taught.”

Harrell shows her “Musing” series, featuring miniature reflections of Old Masters within the compositions. These were key to her being discovered and admitted to art shows. “That was pretty popular. That’s how I learned how to paint.” According to one collector, she has perfected her own technique of oil painting on an aluminum panel. (Aluminum was practical — cheaper, she explains.)

She experimented with extremes in scale, from painstakingly reproducing famous paintings in miniature, paintings within paintings, to outdoor murals. Harrell was eventually commissioned to paint a mural for an Asheboro hospice, as well as aforementioned murals downtown. 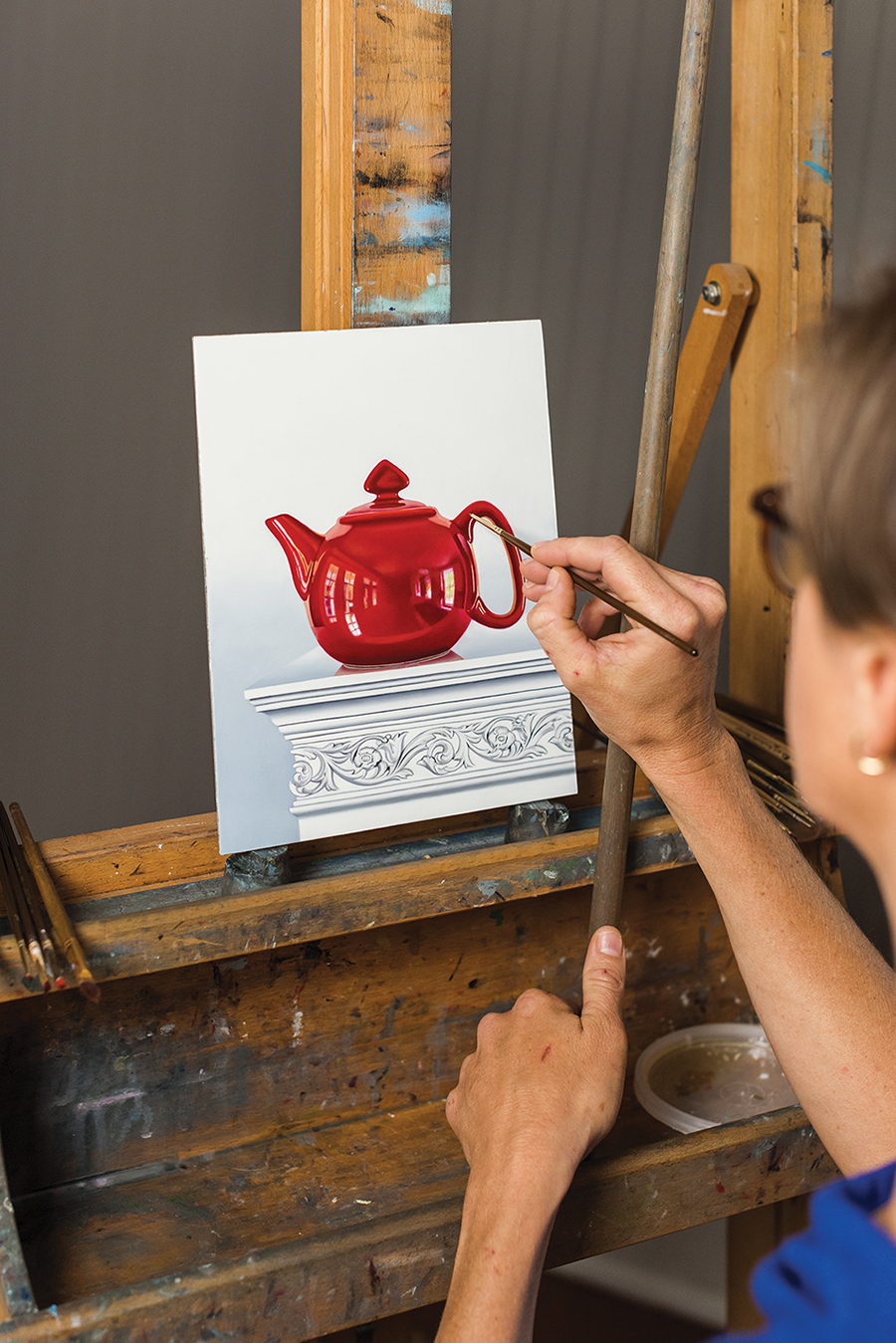 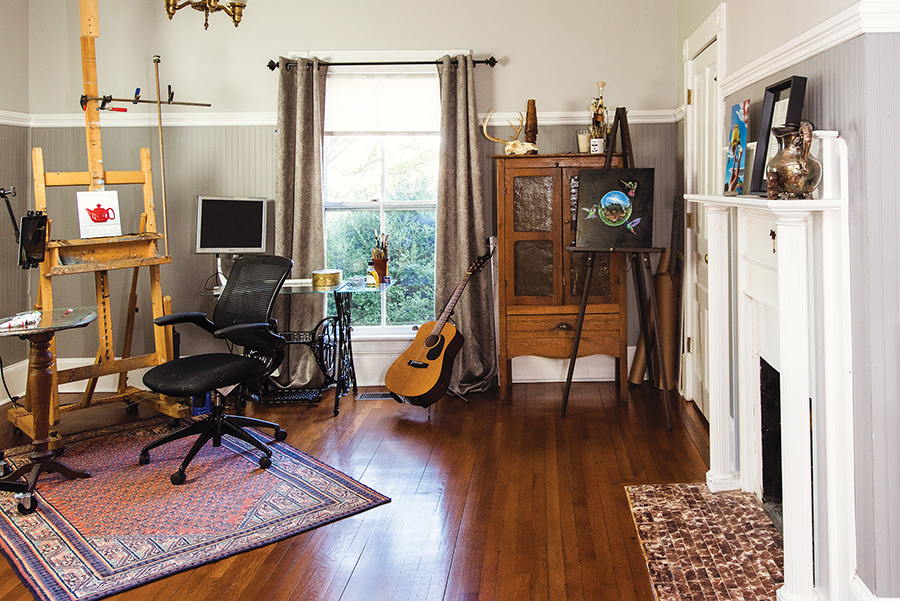 While enrolled in community college, she met art teacher Melissa Walker, who introduced her to Ed Walker, her husband and the owner of Carolina Bronze Sculpture in Asheboro. For several years, Harrell fabricated bronze sculptures there, working with fiberglass, glass and clay. She even learned to weld. Fabrication was “extremely hot and heavy” — and dangerous, she concedes.

“I worked on the bronze and casing that surround the Declaration of Independence,” Harrell says proudly.

In 2001 when she was still a teenager, Harrell recalls Greensboro’s News and Record featuring her working on “February One,” James Barnhill’s iconic work, completed during 2001-2002. “I was welding together the bronze statue of the four students at A&T.”

By 2009, Harrell moved beyond replication of Renaissance works to her first original oils. She imparted the gripping power of the very photographs she often worked from.

Harrell explains, “I was interested in the process . . . and near photo-realism. The challenge: what it takes to make something look real. But when I got interested in art, realism wasn’t cool.” 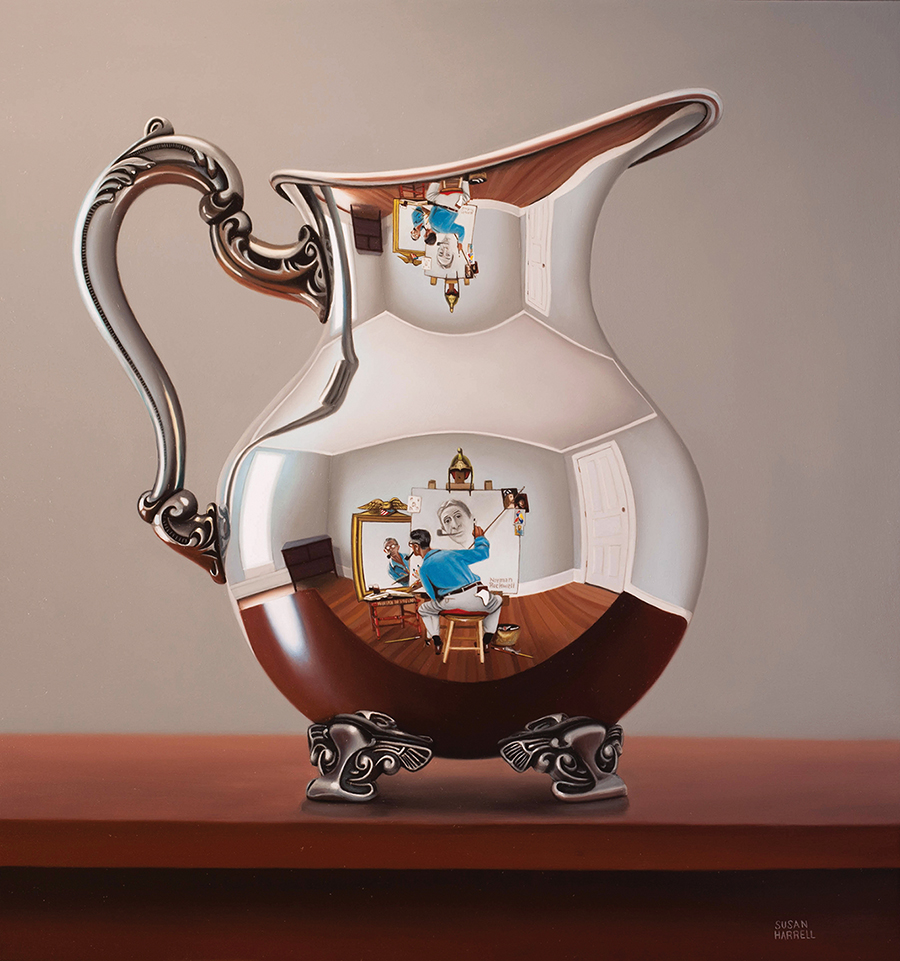 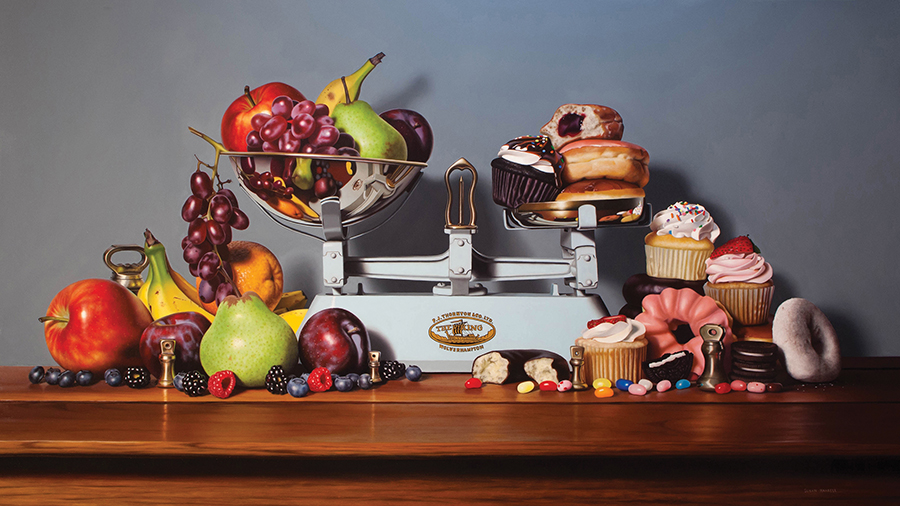 “When I first got into art, I got what I thought was lucky, having been invited into a group show at one of the top galleries in the country in Charleston, S.C.” She sold works as quickly as the paint dried.

For a decade, Harrell painted furiously. She looked successful.

“Everybody thought I was doing it all, right away. I was selling right away. But (some) galleries take 50 percent commissions . . . I wasn’t able to make a living.”

Harrell burned out. Flamed out, actually, and stopped exhibiting. When her contractor brother had an accident, she worked alongside him for a couple of years, learning the finer points of renovation. The physical work was satisfying.

Harrell found renovation rewarding. And yet . . .

“I thought I’d given up on art. If you don’t have a gallery, what do you do? And most of my work was selling out of state. So, nobody in Greensboro knew I was here, and I hadn’t made those connections.”

In a strange way, the house she was busy saving saved her.

Harrell “decided to come back to art in a different way. This house was pivotal.”

She uses the word “transformation.” The transformation of the property feels like kismet, Harrell explains, walking through the gardens, a pleasing blend of stone and brickwork. Brick walkways define pathways and a sunken area features benches created from enormous river stones. 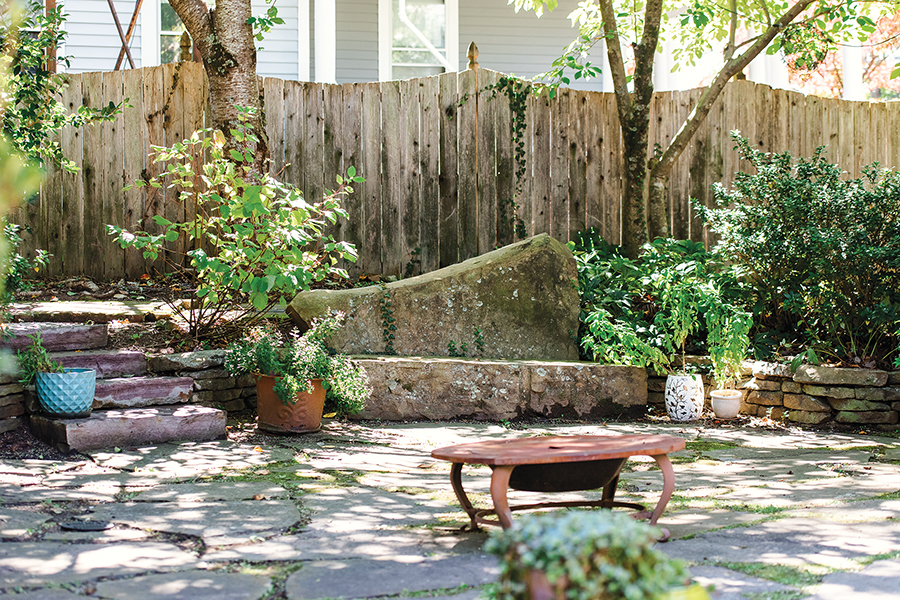 The house flows to the outside with both open and screened porches. The hardscaping was there when she acquired the property, as well as a rustic studio and abundant plantings.

There are 18 gardenias on the property. When they bloom in synchronicity with the garden’s heirloom roses, she finds bliss.

“I’ve never been into flowers . . . I’d never smelled good flowers until I moved here. And now I get it,” Harrell says. “And when they bloom, it’s like a fairy tale.”

Outdoor space, Harrell says, made the early months of COVID bearable — even enjoyable.

“She’s without question the most talented artist in the state, perhaps beyond,” opines Wainscott, a commercial artist and the owner of Inspire by Color.

He commissioned Harrell to create a painting of the Biltmore as an anniversary gift to his wife. He treasures a picture of Harrell at her easel working on the commission, saying he marvels at her work.

Wainscott calls her paintings, “stories within stories.” As a fellow artist, he finds her gifts exceptional.

Plus, he also works with both new and restoration projects, so he knows whereof he speaks. Harrell’s historic home has its own stories to tell, but he feels that she has added “the matchless talent of her artistry.”

Harrell has battled against crazy odds during the restoration, suffering brown recluse spider bites to her ankle. Given her considerable height (she is 6 feet tall) the necrotic venom “was slowed in reaching my heart and circulation.” She later fended off Lyme disease from a tick bite — all within the past six years.

Finally, it is the resurgence of her creative powers and her art that has given her a second wind.

“Something in me never wants to give up. I felt like this about the house, too.”  OH

Cynthia Adams is a contributing editor of O.Henry magazine.