Walk by the handsome and historic Fisher Park home of Dabney and Walker Sanders and don’t be surprised to find them on the porch. Furnished with roomy seating and a vintage chicken coop used as a table (a design nod to their chickens, Betty, Flora and Violet who live out back), it’s a favorite place for  sipping a bourbon and decompressing. 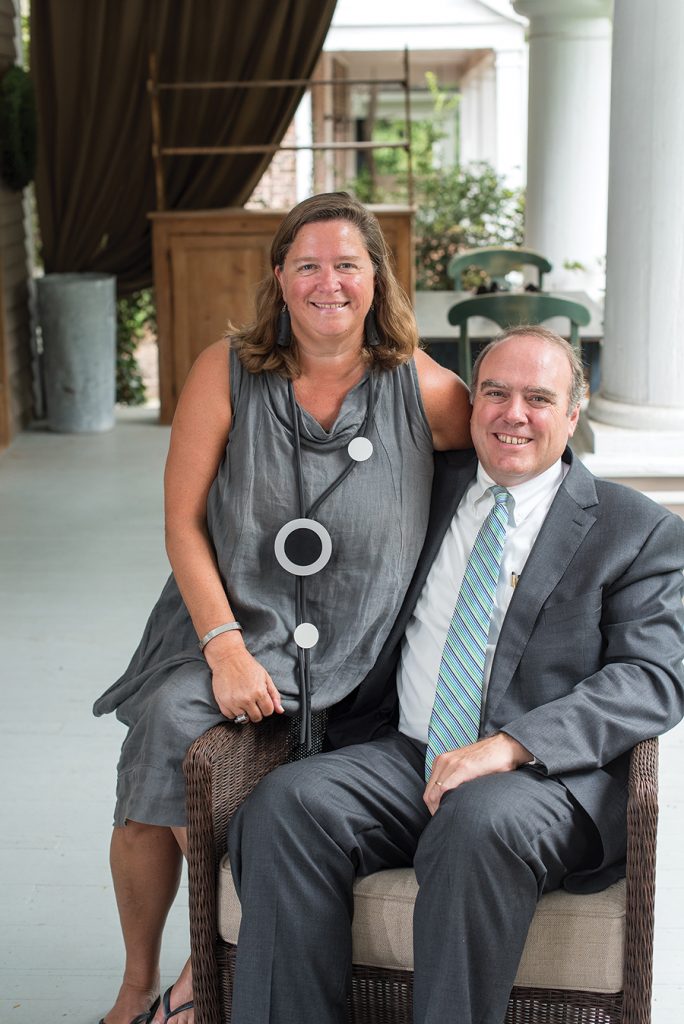 The two have a lot to decompress from. Walker heads the far-reaching Community Foundation of Greater Greensboro. Dabney is project manager of up-and-coming Downtown Greenway, a 4-mile urban cycling and walking trail project developed by the City of Greensboro and Action Greensboro. Both are also involved in a variety of community-based initiatives.

All of which might lead you to think that the two might not have much time for porch-sitting. However, when networking is almost a job requirement, it puts a different light on your front porch and the rest of one’s house. Which might explain why sometimes there’s a bar at one end of the porch and a dozen or so of Greensboro’s movers and shakers sitting and standing up and down the porch.

And what a porch it is — 114 years old, just like the house, a real standout in an historic district known for two-story beauties.

The house possesses more than just a handsome face, it has great bones, with features the Sanderses admired at first sight. It also has historic provenance, having been owned in the 1970s by Brooks Lumber Company, which for over a century, sold wood and provided custom woodworking to area residences and commercial projects, such as the Grandfather Mountain Observatory.

“We have deeds going all the way back,” says Dabney.  Hence there are special woods (like pecky cypress and tongue-and-groove, narrow heart pine flooring), unusually-detailed bookcases, and mantels that handily mingle original details with later upfits that are discretely blended.

The house lent itself to antique pieces the couple inherited and to their artistic tastes. It contained flexible space, rare for a historic house. 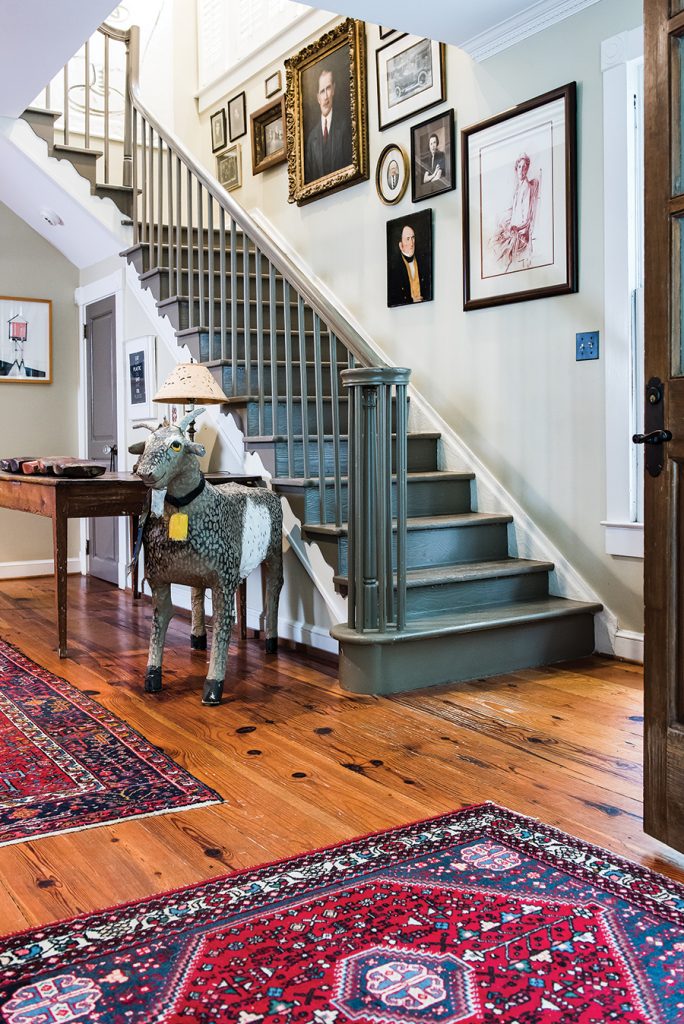 For the Sanderses, it was almost perfect. They could easily walk to work on sidewalks connecting the close-knit neighborhood to churches, restaurants, the Greenway, ballpark and downtown. In addition to accommodating the couple’s antiques and streamlined, artistic tastes, it boasted another feature that Dabney particularly loves: the generously sized foyer, not only because it’s visually appealing, but because it, too, can be apportioned for entertaining. (Dabney says they have seated as many as eight in the hall when the dining room is full.)

However pleasing their surroundings, late last year, the Sanderses agreed it was time for some upfitting to make their house a better venue for those they entertain and for one of their passions — cooking. It all began with a kitchen redo/updo, as it was largely unchanged since a 1970s renovation. They sketched out plans and hired a draftsman to draw them up.

“I was able to crank a lot out of this kitchen before,” says Dabney. “But we were just ready for a little upgrade.”

But like most projects, one thing led to another. As in, a new rear addition that makes the 2,500-square-foot house read larger, accentuating its original positives.

When Dabney’s parents departed Greensboro for a months-long world cruise, the couple swung into action, taking advantage of a window of opportunity that would allow them to renovate and live away from the construction mess. “We took everything out of the dining room and moved all the furniture and took all the artwork down,” she says.

On December 15, the Sanderses decamped to Mom and Dad’s with dogs Hudson and Scout; three days later Phase One had started.

Once demolition was underway, the kitchen was opened up, creating yet more space to accommodate larger numbers of guests. But what distinguishes the space is the couple’s personal stamp. They were determined to reuse and repurpose. For instance, Dabney points out the kitchen’s open shelving, which has a past life from another historic property. 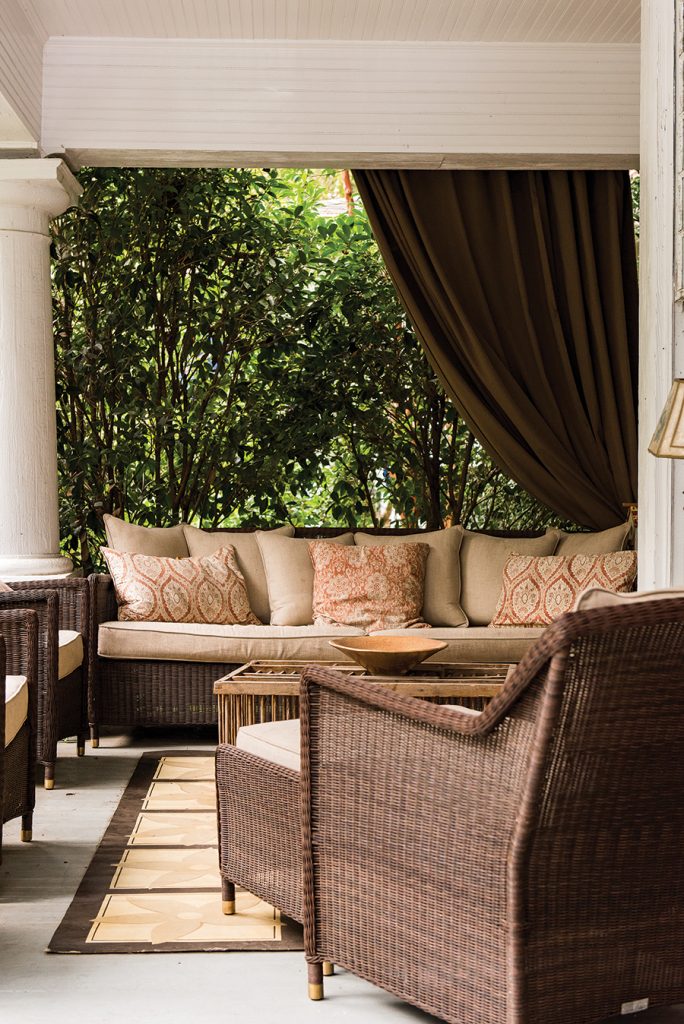 “What we’re really excited about is that these shelves are reclaimed,” Dabney explains. She called her friend Andy Zimmerman, who owns and renovates properties in downtown Greensboro.

“He used a lot of recycled materials,” she continues. “I like his aesthetic. We just had the idea. Andy said, ‘You know, I think I have some old floor joists from the building I’m not going to use. Let’s look and see what we have.’”

The joists came from a factory once used by Blue Bell and Hudson Jeans before it was converted to The Gateway. The building was constructed in 1919, meaning the materials are actually younger than the Sanderses’ home.

“Walker refinished them himself at The Forge,” says Dabney, referring to Zimmerman’s downtown facility that provides tinkerers and inventers with tools and machinery.

“He replaned them and cut them down to size,” she continues. Walker also fashioned the brackets. Once the shelves were installed along two walls above lower cabinets, replacing upper cabinets, it lent an air of rusticity to the kitchen.

“I wanted it to be industrial-ish, but to fit into the house — not to look like a fancy modern kitchen,” Dabney explains.

She and Walker edited every choice in the house’s refreshed interior. “We did not use a decorator. Both of us have strong tastes,” she says. “We are 99 percent in sync.”

Their choices reflect their discriminating taste for organic materials and colors, and a special fondness for art. “It’s not “just a show kitchen,” as Dabney stresses. “This kitchen gets a lot of use.” 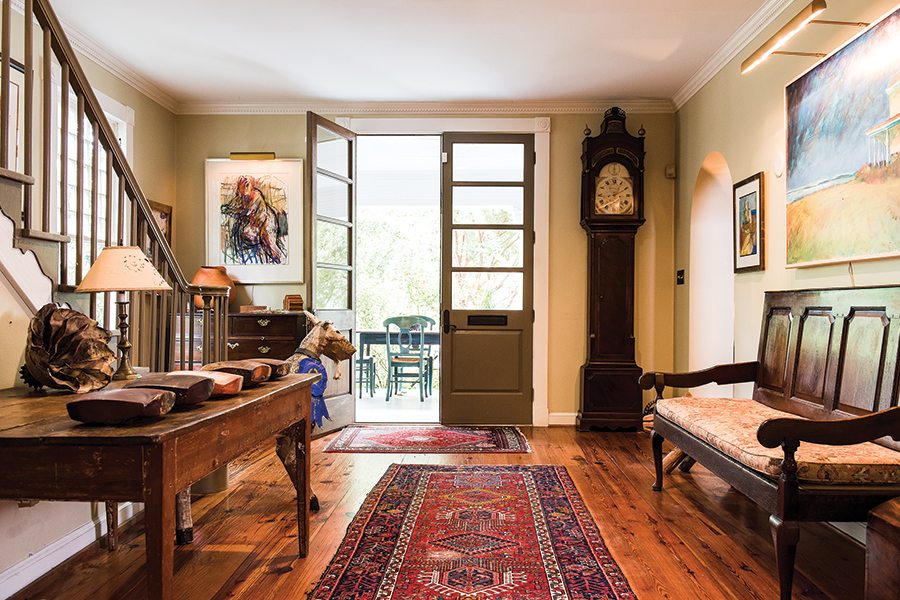 The first idea was to use concrete countertops. When that idea stalled, they had another. “We ended up finding this honed quartz; it looks like concrete from a distance.” She indicates the island.  “We also wanted this stainless-steel on the island, and initially thought about doing it everywhere.”

Dabney explains that it’s not easy to find someone who fabricates stainless steel. “But we found a guy who does commercial work and who was willing to work with us because we had a contractor.” Thanks to the experienced installer it’s all one piece with no seam.

“We were in a friend’s house,” she adds, her forefinger tracing a mark probably left by chopping veggies. “They had just redone their kitchen and they had a stainless-steel topped island. She said, ‘you’re going to freak out when you get the first scratch. Then, you’ll get over it.’”

The gas range is professional grade, with commercial appeal. The Sanderses liked the appliances they had used for years. Rather than throw out anything that was still functional, they kept what they had.

“It’s a 20-year-old stove we bought from someone in the neighborhood. We reused the refrigerator and the dishwasher. The only new things were the sink and we put in an icemaker.”

As a Delancey Street mover pointed out as they were moving back in, there is no microwave to be seen. Dabney says she was impressed that he noticed. “He said it was a sign we are serious cooks.”

Once upon a time, the couple’s many cookbooks were stored above traditional cabinets. Now, a wall is devoted to floor-to-ceiling bookcases. “My mom’s idea,” Dabney says. 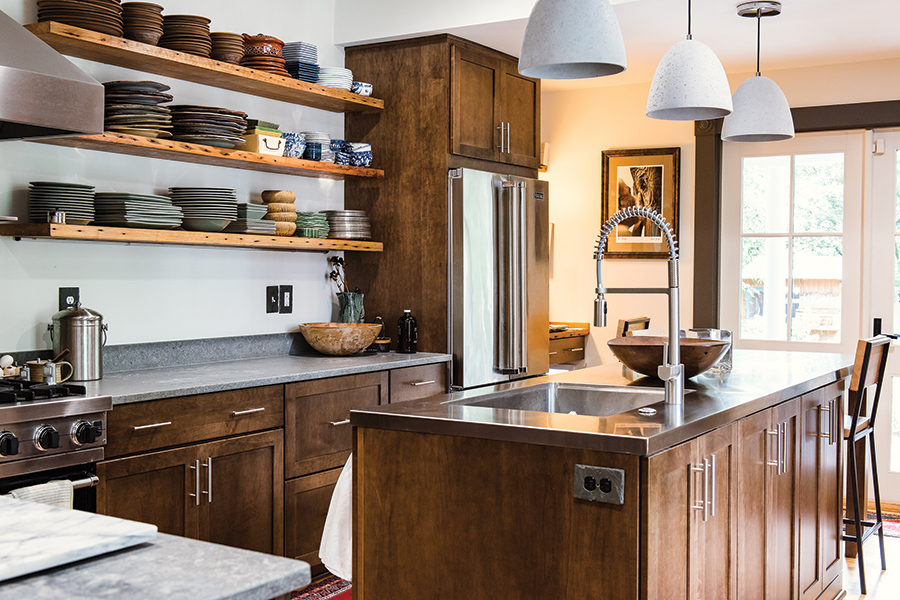 Since the renovation called for relocating the laundry room upstairs, there was room to install new French doors as the back entrance. An echo of the double front doors, they open onto a wide rear porch with a table and more seating. The former pergola was covered with a metal roof, further expanding the porch’s space.

At the rear of the kitchen, a work desk was created near double dog doors tucked below. Both are discretely placed out of sight.

“As you move in, you think of things you might have done. We’re still in this phase,” Dabney confesses. “I felt good about having a vision and sticking with that. I would renovate again.”

They displayed crockery and pottery on the customized shelves and hung art (most of which has been purchased from favorite benefit auctions) throughout the house.

In the dining room, a chair sketch by M. C. Barrett, purchased from a Guilford Green Foundation auction, has a place of pride over a sideboard. It is the first thing one notices when entering through the front doors.

“A lot of the art we’ve acquired was through events to benefit nonprofits,” says Dabney. “The bowl [beneath] was a Collector’s Choice purchase at GreenHill.”

By April, the kitchen was completed, and Phase Two of the renovations began in May.

This phase included relocating the aforementioned laundry room to an upstairs bath, creating a guest bath with a soaking tub, and building an upstairs master suite, with his-and-her closets, and master bath with an open shower and customized console and sink. The addition would require new windows, which, like the kitchen shelves, would be sourced to reflect the house’s status in a historic district.

This time, the couple stayed in place during renovations, living in the downstairs guest room and taking full advantage of their new kitchen.

A single glitch with flooring created a slight delay. Otherwise, the process went as planned. They have only just begun hanging art and moving into the upstairs suite. 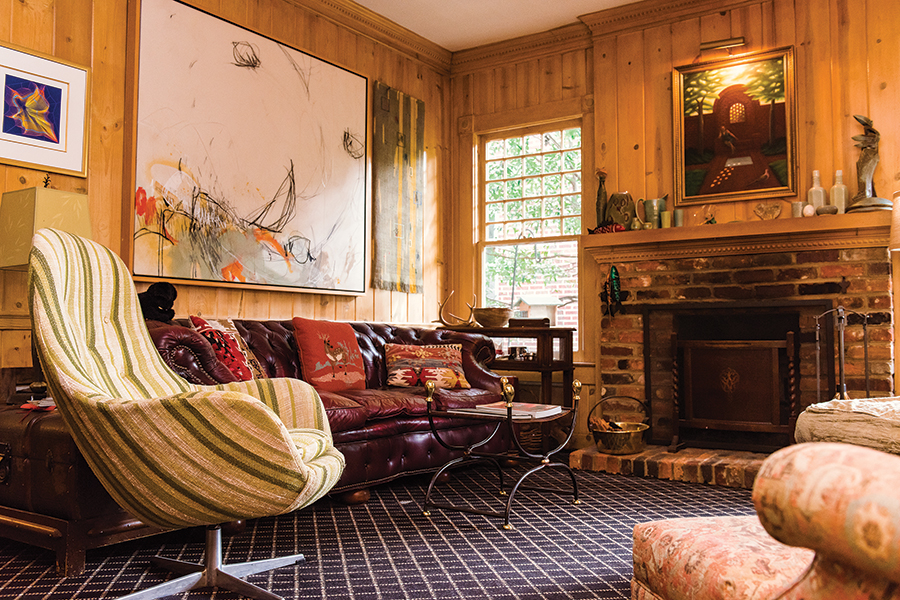 The master overlooks the backyard with a view of a terra cotta roof, which reminds Dabney of Italy. Her closet, off the master bath, is artfully arranged in a color-wave of earth tones, all natural, organic materials, which she favors.

“In Catholic school I wore a uniform,” she says, explaining her preference for simplicity.

Walker’s closet is also tidily organized. However, Dabney confesses her things have begun creeping into his closet.

She is an organizer, and apologizes for a spread of jewelry, which she is winnowing down as she deletes the extraneous. She favors handmade statement pieces, sometimes items found on travels or in museum shops. But the piece of jewelry she is most known for is one she wears daily. It is her father’s POW bracelet, stamped with “LCDR Porter Haylburton.”

The bracelet is made of stainless steel.  Durable. And, in her case, especially meaningful.

A traveling exhibition of artifacts will feature her father’s collection of POW bracelets, which were mailed back after the war ended. “We had about a thousand POW bracelets,” Dabney explains — so many that they fashioned a makeshift chandelier from them.

Back downstairs, she looks around the new kitchen, a place where they spend so much of their home time.

What was their best idea?

“The icemaker,” she says suddenly. “It was such a nice addition.  We decided to have a small bar installed in the kitchen for the standards that we drink. We spend a lot of time at the end of this island. On a nice day, we have both of those doors open to the outdoors,” she says, casting a gaze through to the back porch.

Here they sometimes have cocktails, especially in cooler weather, as they have ample cover from the rain and outdoor heaters to warm them.

Out back, too, there is a view of the charming chicken coop for their three chickens. The enclosure — another one of Walker’s construction projects — is dubbed “Close Enough,” Haylburton’s joke that the coop wasn’t plumb, but “close enough.” The chickens are friendly, and one darts underneath the chicken wire enclosure as Dabney chides it.

She briefly admires the improved rear elevation of the house, which now more neatly echoes the front.

Post renovation, what is their favorite thing?  “Right now, it’s all our favorite!” says Dabney.  “It’s such an upgrade from where we were.”  OH