How stay-at-home mom Ursula Carmona became a media sensation (Hint: She did it herself)

Nine years ago, Ursula Carmona typed out her manifesto:

“I’m a DIY junkie,” she confessed. And with “expensive taste but no décor budget,” she realized this was her best option.

Never in her wildest dreams could she have imagined that her simple mission — to create fresh, creative interiors on the cheap and inspire others in the process — would render her a nationally recognized design influencer.

This came of necessity, she insists. 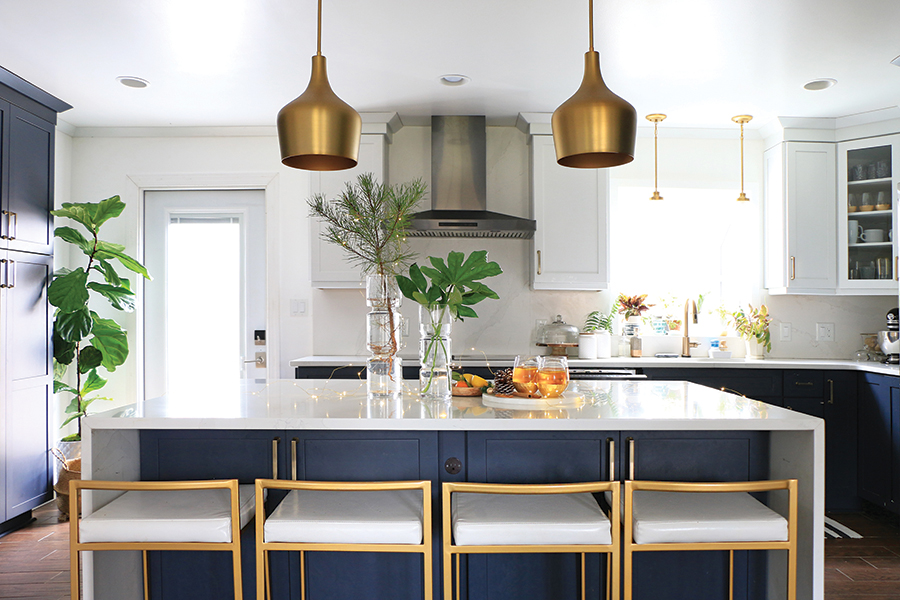 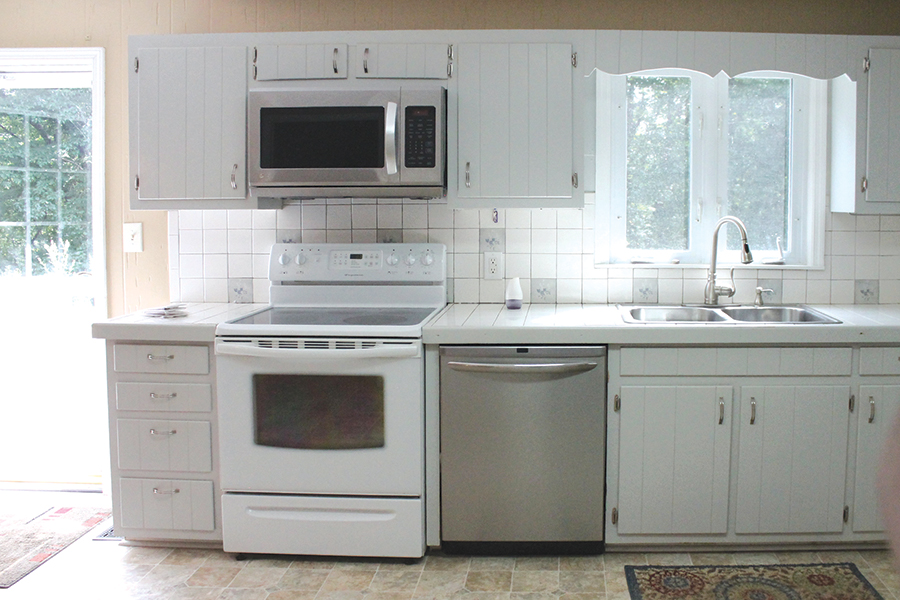 One day, she found an old circular saw at a yard sale, and before she knew it, Carmona was leaning into all sorts of power tools — hard. Mastering tools emboldened her to tackle projects like moving walls, creating her own built-ins and undertaking entire bath and kitchen re-dos.

Her résumé reads like a DIY dream: Better Homes & Gardens Stylemaker; nominee for Domino’s Design Blog Awards; runner up for Home + Garden Trendsetter of the Year.

And since landing in North Carolina five years ago with her family, she has been power-tooling, painting and resurfacing her way towards creating the home of her dreams — transforming a fixer upper in nearby Ruffin into a house fit for the pages of Better Homes & Gardens. Check it out in the January 2021 issue, to be exact. All the while, she’s become a print and social media inspiration for thousands of others with ambitious tastes but limited budgets. 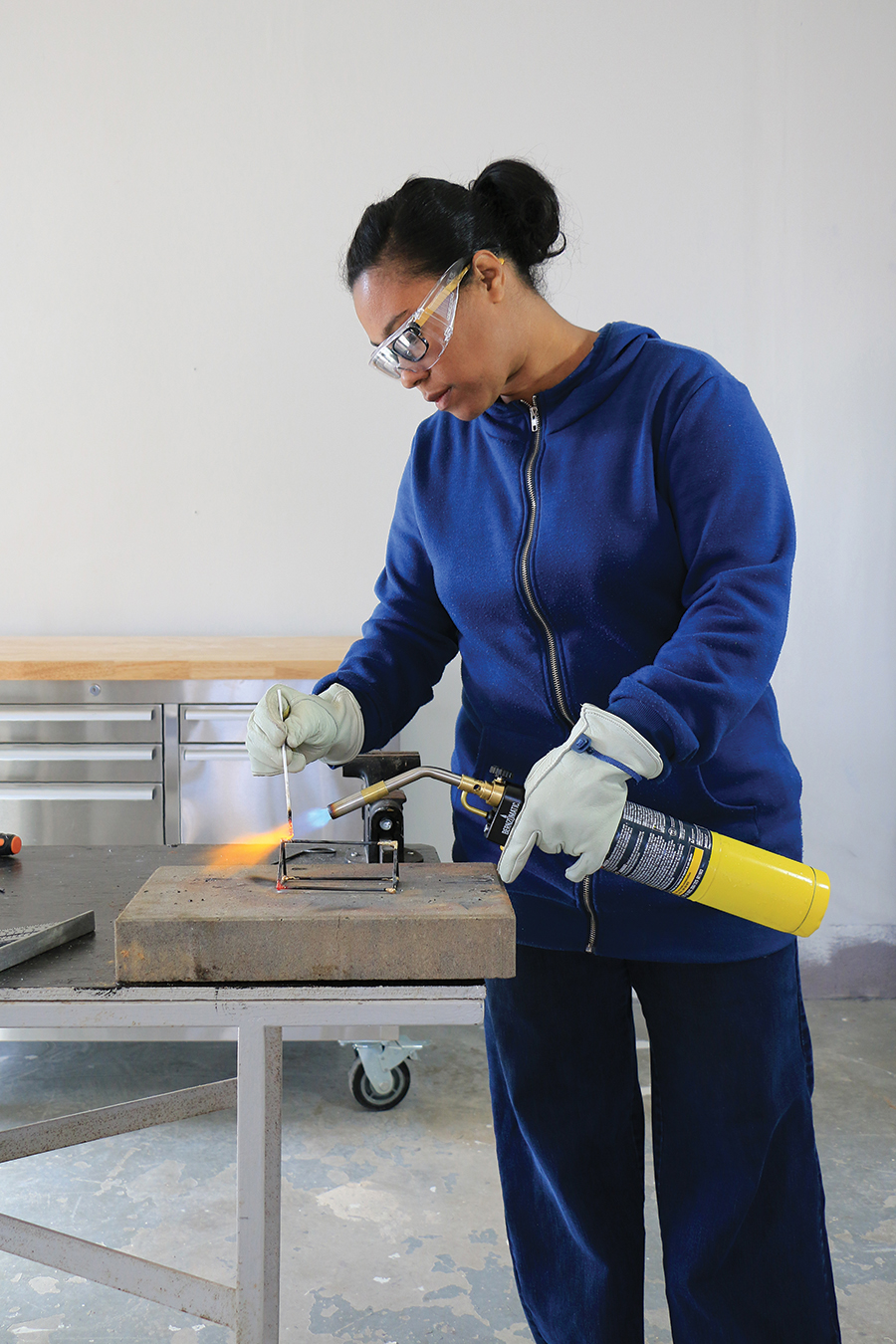 A decade ago, before her husband Orlando’s California job relocated their family from “the brown hills of Cali” to the frigid Great Lakes area, Carmona worked as a massage therapist. Although she briefly considered nursing school, it occurred to her that a profession in health care or alternative medicine simply wasn’t going to spark her joy.

Orlando supported her decision to stay at home as daughters Fiora, Priya and Sayuri were born in close succession.

“My husband worked two jobs. We slept on an old mattress with a spring that used to poke me in the ribs at night.” They saved money and stuck to a budget.

But living in the cold clime of the North, in a confining bubble of children, meals and chores, she morphed into a dauntless “DIY junkie,” she admits. Adversity in the form of the difficult climate and distance from her California family amplified her creativity.

With kids at home, says Carmona, “You need some outlet.”

And so she began documenting her DIY spirit by creating her first blog, Home Made by Carmona.

The blog was something of her own, something she could work on in her precious downtime. Just a little project, she figured. Even if nobody read it, she consoled herself, “it’s a way to reach out to a creative community.”

Life as a stay-at-home mom provided endless content. From her once lonely kitchen table, the first-time blogger began sharing meal planning and organizational tips, then, eventually, projects that became more and more ambitious. Within just two years, she had amassed thousands of subscribers.

Soon, too, Carmona was invited to appear on HGTV’s popular home improvement programs, becoming a name. A brand, even.

She gained eager sponsors like The Home Depot, whose products aided her renovations. She was even invited to travel with HGTV Expos, presenting alongside celebs like Fixer Upper’s Chip and Joanna Gaines.

“I had a chance to chat with Matt Fox,” she says. “He mentored me, helping my public speaking.” (Fox and Shari Hiller hosted Room by Room, HGTV’s first-ever program, which swiftly boosted home renovation’s ascending popularity among viewers.)

Carmona ascended too. Naturally telegenic and preternaturally calm, her gentle smile and self-assurance caught the attention of magazine editors, TV producers and sponsors — those who “make things possible.” Still, she modestly insists, she is “not a top tier” blogger. 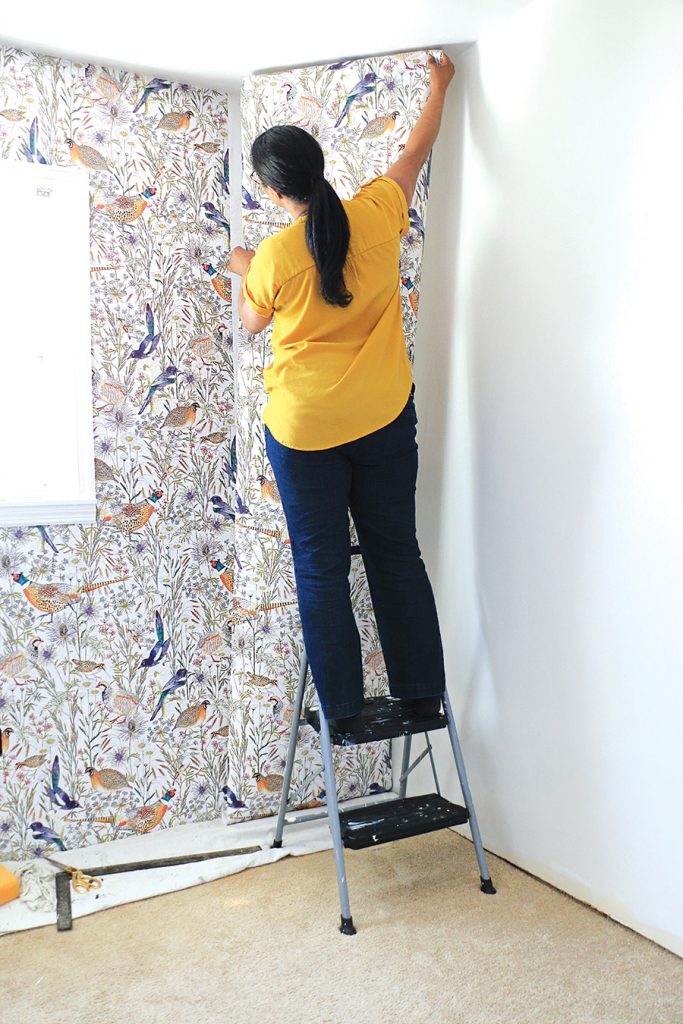 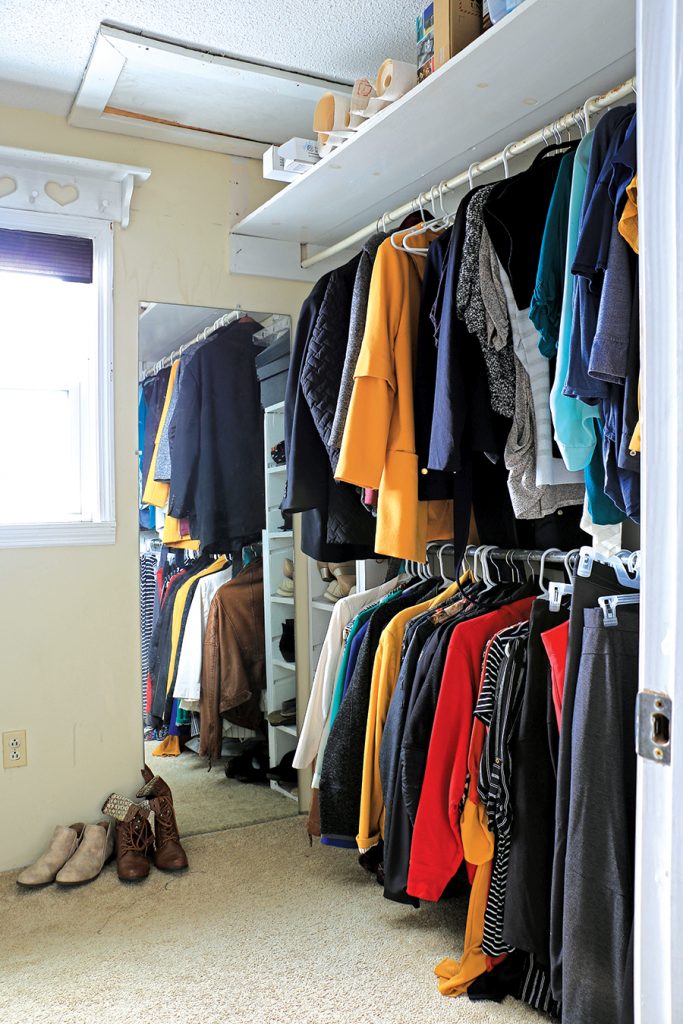 For someone who had never worked in media or design — and without the help of an agent to promote her — that’s pretty impressive. But she worked hard, springing up before dawn each day and often toiling away into the night.

She credits necessity and creative restlessness as the genesis for her work, but it’s clear she possesses an extraordinary drive.

She also learned the basics of home renovation — electrical wiring, plumbing and carpentry — all by herself, calling it “solo remodeling.”

More and more she was tapped for national television appearances on HGTV and as a speaker at home improvement shows. She became a DIY finalist featured on Hallmark channel’s Home and Family Competition.

She marvels that all of this has happened. But when she shares the story of her childhood, it’s clear the apple doesn’t fall far from the tree.

Carmona is the oldest daughter of Donald and Karen Town, who remain on the West Coast. Donald is a fine artist and a former art director for Disney known for creating iconic art for films including Beauty and the Beast and The Little Mermaid.

As a child, Carmona often accompanied her father at work and played on film sets.

“I grew up a Disney kid . . . The philosophy that you can create anything.”

She even jokes that she married her husband “because he looks like Aladdin.”

Carmona interned at the studio while she was being home schooled, rotating through the various departments and absorbing the creative energy.

“My folks sought to be expansive,” she adds. They always encouraged us to “explore whatever we wanted to do.”

Long before the pandemic, Carmona proved herself uniquely equipped to handle isolation. She was committed to providing the home-school experience to her children, too.

Yet blogging was daunting because there was such a learning curve.  Carmona slowly taught herself everything from writing content and creating photography to styling and blocking shots, even learning HTML in order to program her new blog.

The photography and styling were easier. “I’m very visual,” she explains.

She studied search engine optimization in order to attract more eyeballs to her blog.

What most surprised her were the responses to organizational ideas and meal planning tips.

“Everybody wanted free downloadables and printables,” she muses.

America took notice. One journalist marveled that she had taken her make-do, re-do style and “turned that into an art form” after she was a featured speaker at a Cleveland, Ohio, home show five years ago.

Yet another journalist called Carmona’s home renovation skills nothing short of a “sensation.”

Upcycling and self-reliance became key to her mission.

Repurpose things, she stresses. “You can make beautiful things with effort and creativity. That is what I want people to understand.”

Her daughters helped her rescue cabinets from the roadside by loading them into a wagon and lugging them home. Now painted and with new hardware, they factored into a reno and are utterly unrecognizable.

“I don’t want people [to view us] as design bloggers who didn’t have to reach to get here. And, I don’t want them to waste money.”

She worked equally hard at presenting her projects in an encouraging and articulate way.

At one point, she undertook “at least four one-room challenges sponsored by Better Homes & Garden” in a single year. The challenge requires completing a room renovation within six weeks, as a community of bloggers post their progress along the way.

Despite travel limitations, 2020 led to more media exposure than ever, as home-bound followers eagerly attempted DIY themselves, although the pandemic halted media junkets. Many of her most popular ideas on Pinterest concerned adapting to pandemic confinement: A closet became an office — a “cloffice.”

But there was another all-consuming project: the fixer upper.

Around the 2016 Cleveland home show, Carmona made another vow: No more shoveling snow.

“I had lived in the North for so long. When opportunity came, I said, ‘Is it my chance to be warm?’ We’d heard so much about North Carolina from friends and my sister.”

They searched online properties once Orlando found a job in Elon.

A (vacant) two-story house set on 16 acres of woodlands in Ruffin interested them. It was remote but blissfully private. Plus, it had a guest cottage.

“Space and opportunity,” Carmona says. But her husband was dismayed. 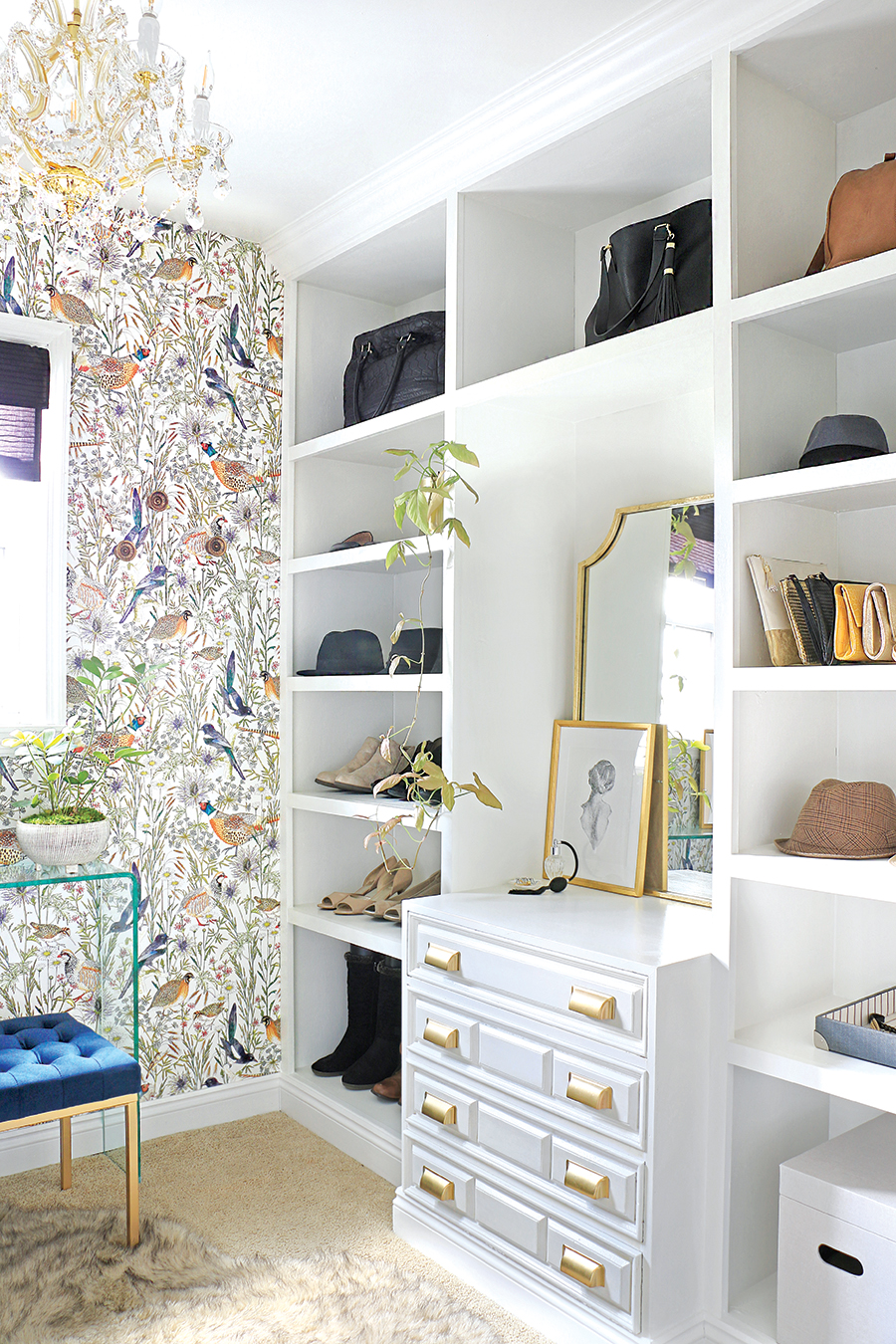 The setting was idyllic. There was even a solar panel! The houses would allow her to expand her skills, she decided. As for her husband, well, ‘He didn’t object that hard.’”

She knew he would come to love it. “The joy comes from making the space your own.”

Renovating the guest house kitchen was first, so her sister, brother-in-law and their new infant could temporarily stay there. (They later resettled in Charlotte.) Her own kitchen redo happened later.

Recently, when Better Homes & Gardens came to document the progress of Carmona’s DIY dream home — including the kitchen, the living room and various refurbished interiors — what they didn’t photograph was her newly renovated greenhouse. (Carmona is an avid gardener as well, with, believe it or not, a separate gardening blog.)

And what was that line about the apple and the tree?

The Carmona daughters are growing up. Fiona, 16, who has dreams of culinary school, is working with her mother on a culinary blog, Cooking with Carmona. Priya, 15, aspires to be a textile designer and has been printing her own designs onto fabric for design projects.

Last year, Carmona braved COVID to fly to California for a partnership project with The Home Depot. This was especially close to her heart: she was to tweak her parents’ home.

“I wanted a space to showcase his [Donald Town’s] artwork. I will say, despite the job he’s had and the lifestyle he’s chosen, he’s the most down-to-earth person.”

Carmona pauses. “Maybe a little too humble. He rubs shoulders with these incredible people and doesn’t say a word.”

Like her father, she is self-effacing. “I consider myself a mid-level blogger. But when you are breaking into a smaller niche, it presents some opportunities.”

She adds, “Isn’t the idea of stretching oneself to break the mold?”

It’s not just who you know, talent and skill, she says, “but a little luck too.” OH

You can check out Ursula Carmona’s blog at www.homemadebycarmona.com.