The spirited works of Laura Pollak

I always joke that using pastels is like playing the piano with a sledgehammer,” says Laura Pollak. You wouldn’t know it from looking at her vivid, finely wrought works — a fiery lake at sunset, a wedding tent set aglow by the soft light of a lantern, the brilliant blue of a starlit sky. She adores working in pastels, which she likens to “painting with a tube of paint.” Mastering the craft requires “getting a feel” for where the crayon will hit the paper, the artist explains. “You don’t exactly know where that mark is going to end up.” The medium, she says, “is very, very direct.” 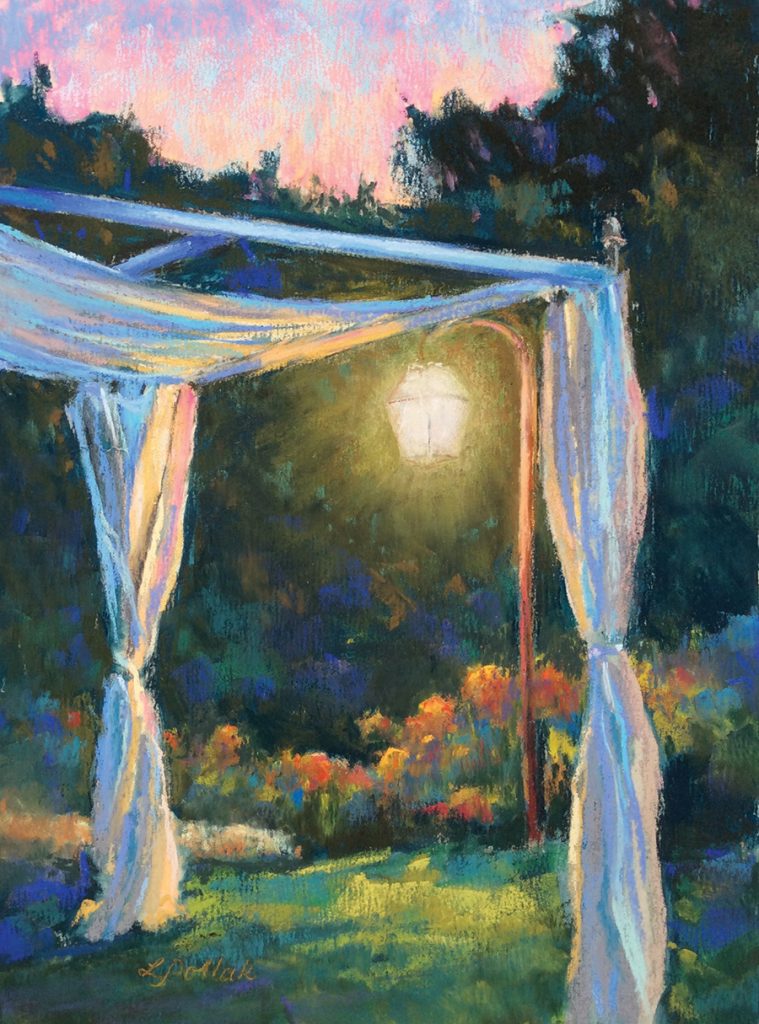 And very forgiving, which is how Pollak came to it in the first place. She had been taking a watercolor class from another local artist, Alexis Lavine (featured in the May issue of this magazine). “You know how watercolors are transparent, drippy and melting colors?” Pollak suggests. “Mine got chalkier and thicker, darker, muddier,” she recalls. At Lavine’s urging, she signed up for a few classes with pastel artist Adrien Doss. “And I fell in love,” Pollak remembers. “If you work on computers you can hit “Command Z” and undo anything,” she offers. With pastels, “you can do the same thing,” she says. “You don’t like an area? You can brush it off and say, ‘I need to redo that.’”

And gripping the pencil, or big block of pigment (for pastels come in all shapes and sizes, depending on what an artist chooses to draw), harks back to Pollak’s childhood in Detroit, when at age 3 or 4 she would grab “whatever device was around,” and sit at the kitchen table, drawing mountains. “I was enthralled that I could create distance,” the artist remembers. 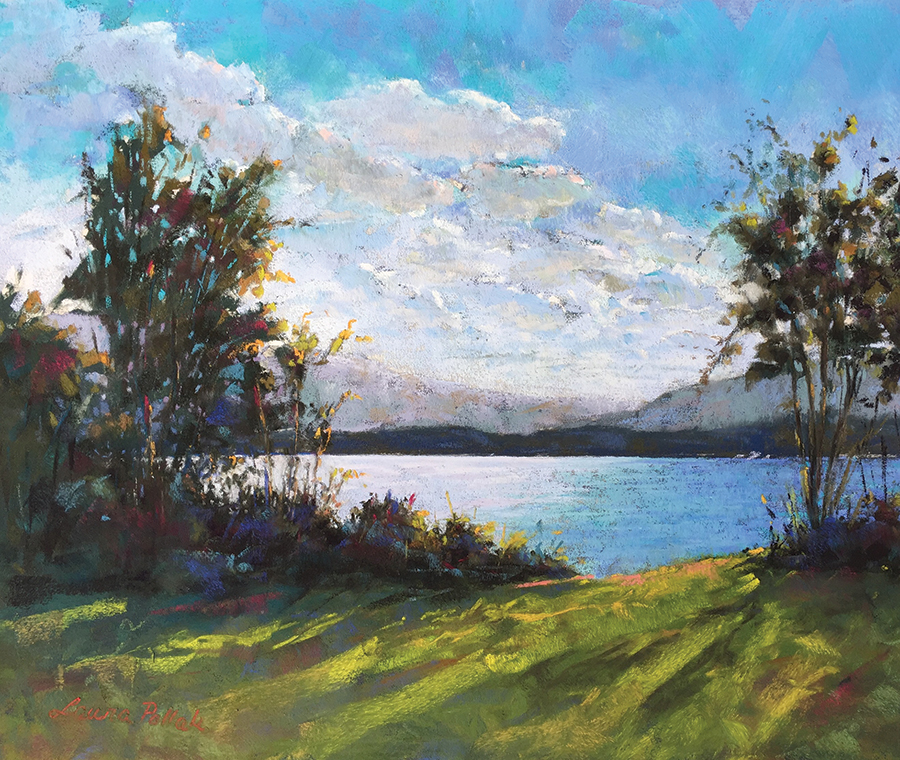 From then on she was perpetually involved in the visual arts, going on to earn a Bachelor’s and then a Master’s in Fine Arts from Michigan State University, and continuing with some post-graduate work at the Motor City’s Center for Creative Studies. “However” she adds, “with the encouragement of my parents saying, ‘You need to have a career and earn a living,’ I went into advertising and graphic design,” Pollak explains. She landed in Chicago, working at big agencies like J. Walter Thompson, on accounts for household names such as Sears, Kraft and former telecommunications giant Northern Telecom, later Nortel. By then she’d met her husband, Jeff Petrinitz, who had gotten a medical residency in podiatry back in Detroit. Disappointed at having to relinquish the “cool Mad Men–style” culture she’d led in Chicago, Pollak decided to take a break from the rat race and get back to fine arts, learning glass-blowing and ceramics. “I love to get my hands dirty,” she confesses. When her husband acquired a second residency in Detroit, Pollak, reluctant to have another gap in her resume, took a job at a downtown agency working on the General Motors account.

But urban living and Midwestern winters began to take their toll. “We wanted to get the hell outta Dodge. So, we started looking around the country, and turned to North Carolina — and made Greensboro our home,” she says. That was 33 years ago. 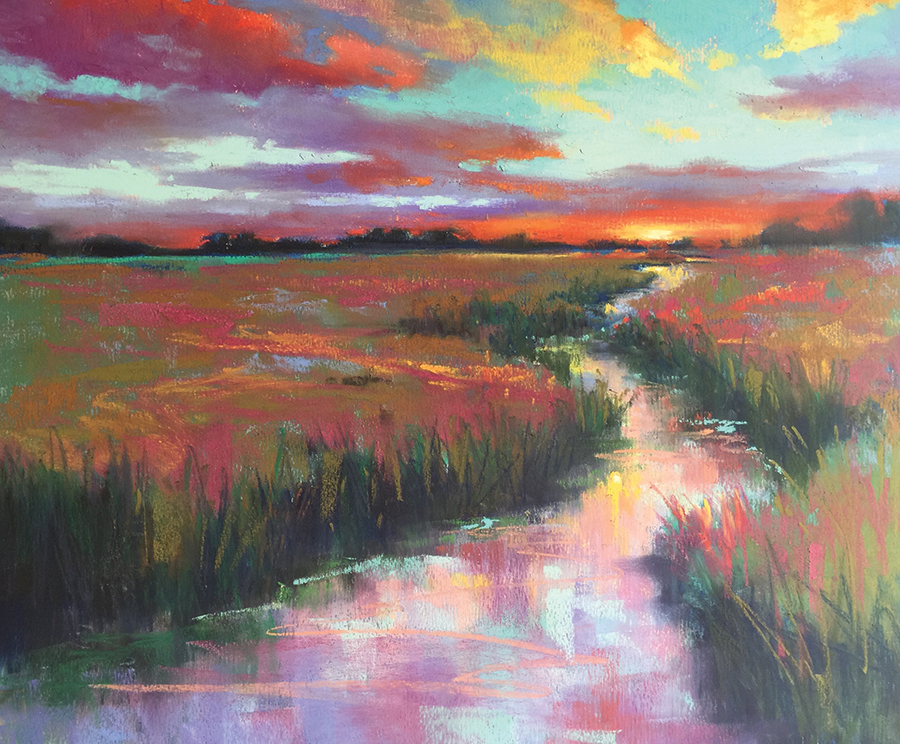 In that time, the artist set up her own agency, Pollak and Associates. But running a business while raising two boys, Jonathan and Matthew, proved too much. “So I pared it down a little bit, and then I said, ‘You know, it’s time for me to paint.’” Pollak says. In the last decade, devoting her energies to art full-time has been “great fun,” she says. “This is the job I was meant to have.”

Her avocation quite literally shines through in her works, whether a vineyard bathed in golden light or downtown cityscape burnished at sunset, each imbued with an otherworldliness. They reflect, not so much a moment in time, as a place seemingly outside of time. The effect is deliberate on the artist’s part. Recalling a cycling trip to Japan’s Noto Peninsula, she found inspiration in a temple atop a hill. “It was palpable,” she says, describing the spirit of the place. “It just felt very holy . . . a sacred space. It was beautiful.”

Pollak continues to explore the intangible through her oh-so-tangible medium, taking classes and workshops, and serving as president of the Pastel Society of North Carolina, which, last spring, presented a show of all pastel societies across the Old North State at The Art Shop. A more recent online show led her to a new genre, abstract drawings, which “very few pastel artists are doing,” Pollak says. “They’re very freeing, playful,” she adds, estimating that about 50 percent of her work is now abstract. Several of them are currently on view at Beth David Synagogue until month’s end. 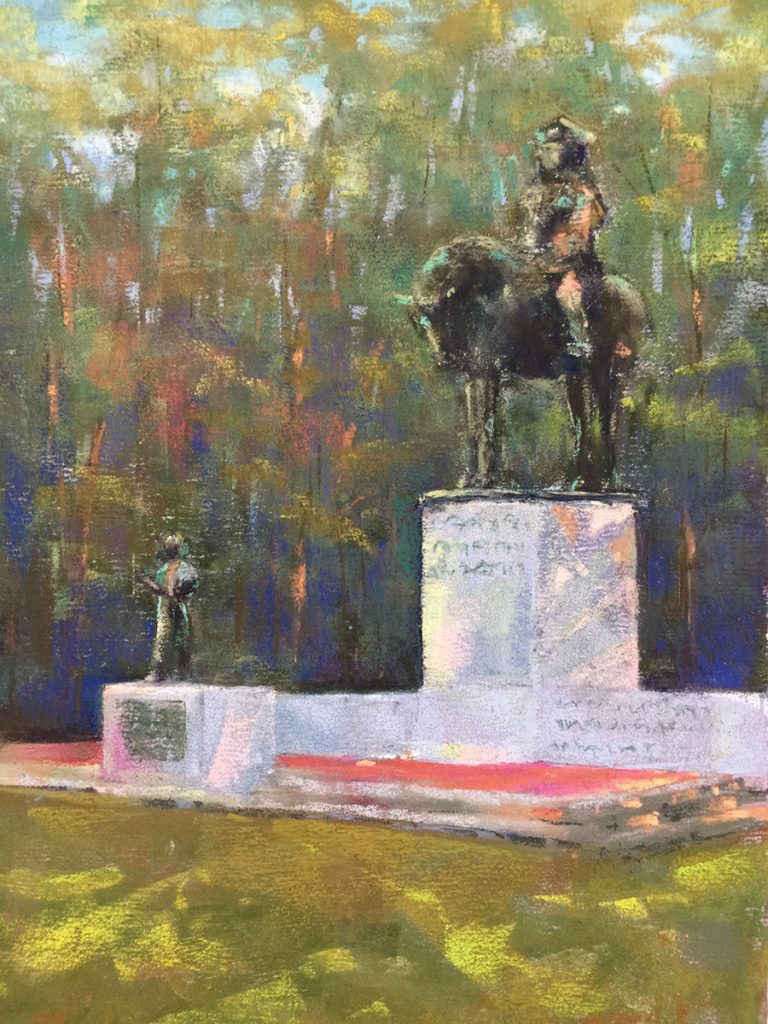 With an eye ever toward the distance, like those distant mountains in her childhood drawings, Pollak continues to explore and expand her repertoire. She began teaching about a year ago, and just last month was anticipating a return to painting — this time with oils. “I love using brushes,” she says. But she’ll never relinquish the immediacy of pastels, and its seemingly endless avenues to what some call “the other.” She says that she’s determined to learn how to translate words and music into visual space: “I want to translate The Moldau by Smetana into pastels. I want to be able to translate a beautifully written passage by rhythm, by color, the words,” Pollak says. “I still haven’t figured out how it works. I’m getting closer,” she allows. And how lucky for us when she does.  OH

Laura Pollak’s abstract pastels will be on view at Beth David Synagogue (804 Winview Drive) throughout the month of October. For more information about the artist visit laurapollak.com.