How a funky house on Lake Jeanette became a fortuitous vision

Plan all you want, but life has a way of leading you where you were always going, even if you don’t yet know it.

This adage has been a theme for Jay and Julie Brennan since the day they met. Why would the story of their unexpected dream home on Lake Jeanette be an exception?

Eight years ago, merely by chance, Jay and Julie each found themselves at Starmount Forest Country Club, where neither was a member. Mistaking Julie for someone he knew, Jay tried to strike up a conversation with her and was promptly shut down. 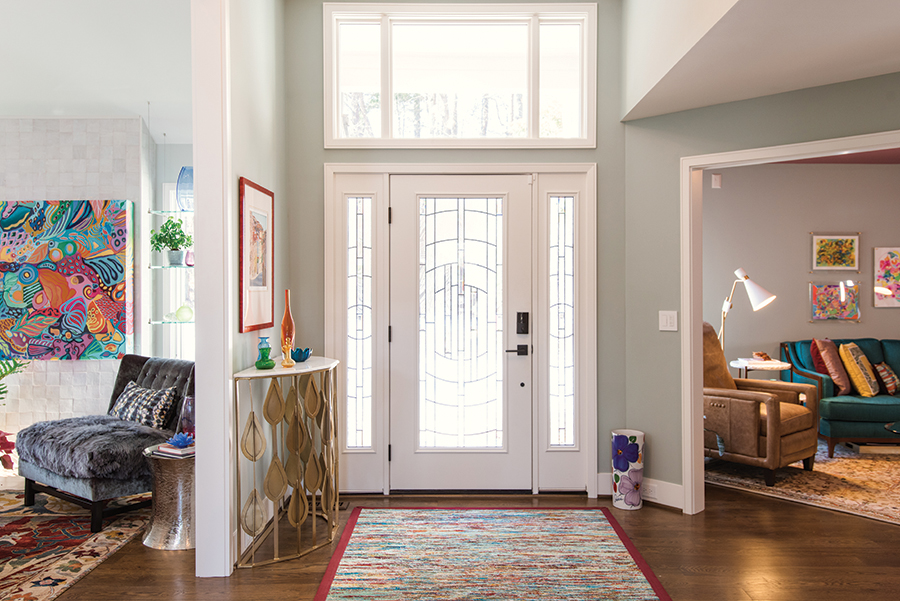 “I had recently divorced,” says Julie. “‘Do I know you?’ sounded like a pickup line.”

It wasn’t. Jay, whose own marriage was dissolving, “actually did think she was someone else,” he says.

After their private wedding in 2015 — “we didn’t want to have to worry about re-titling,” says Julie —  the Brennans closed on a house in Lake Jeanette’s Southern Shores community that met their three requirements: abundant natural light, ample privacy and proximity to Sherwood Swim & Racquet Club, where Jay plays tennis.

Today, their lakeside home — a modern stone, stucco and cedar vision with dramatic, angular rooflines and a sweeping view to the water from nearly every room — is everything they could have ever wanted. The interior is a playful 4,000-square-foot exploration of colors, patterns, shapes and textures (yes, stripes and polka dots can unite) with no shortage of light or whimsy. Hidden from the road by a veil of hardwoods, the five-bed, four and one-half bath house opens to a spacious ipe (Brazillian walnut) deck complete with outdoor kitchen, weather-resistant furniture and hot tub. 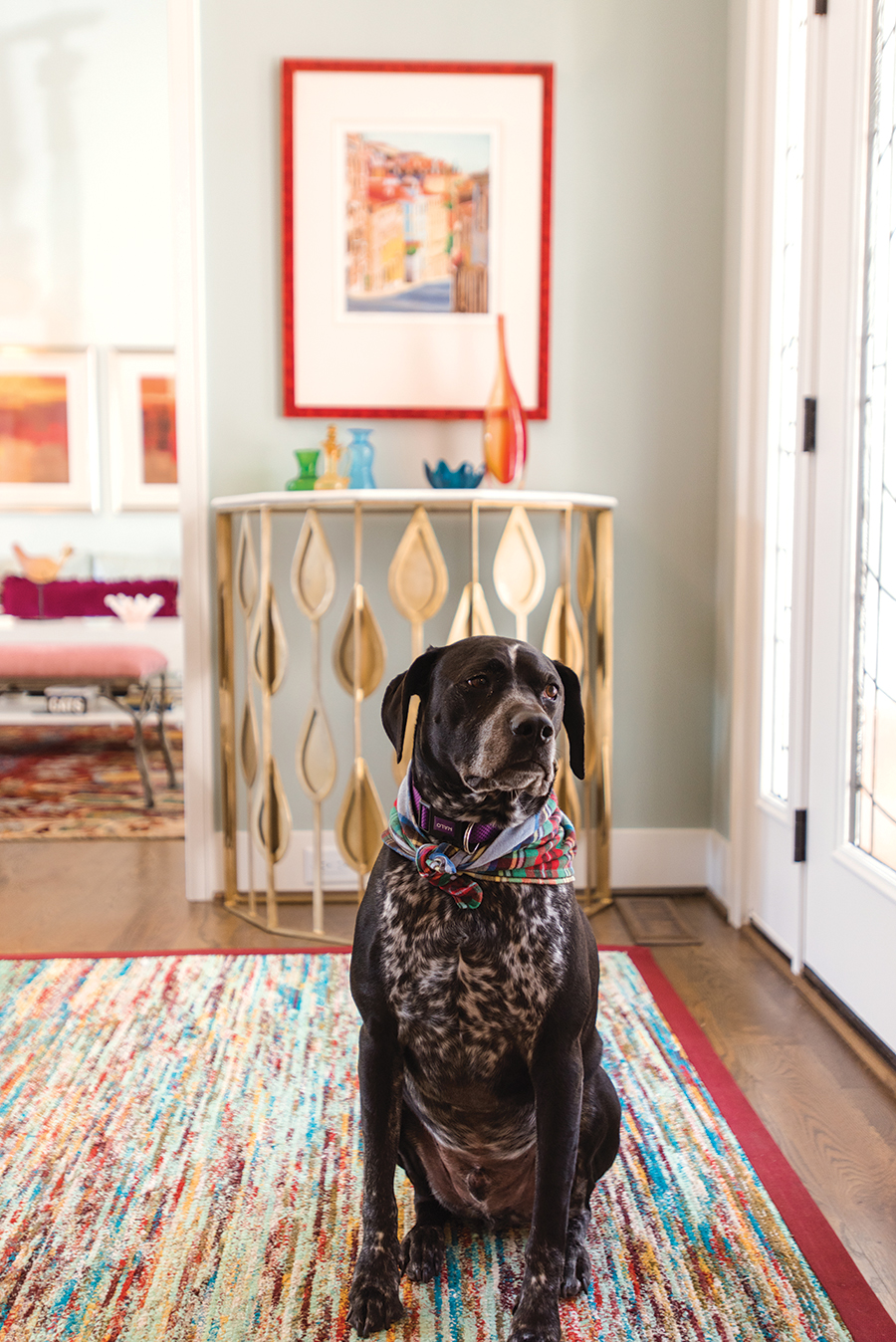 Built in 1989, the original house was designed by an architect who lived there with his wife until the bank took it from them in the early ’90s. The Brennans bought it from the second owners.

“It was unusual,” Julie says of the interior. Pink walls and handmade Mexican tile floors. But the floor-to-ceiling windows looking out to the water rendered the house utterly resplendent with natural light. She saw potential.

Julie is a retired art teacher who worked for Guilford County Schools for 10 years following her move here from Lynchburg, Va.

“Light is very important to me,” she says.

Jay liked the privacy. Because the house is surrounded by trees and situated on a cove near a water main that keeps boats confined to the main lake, the Brennans would never need to draw another window shade again. Plus, the modern design reminded him of the house his parents used to own in Naples. 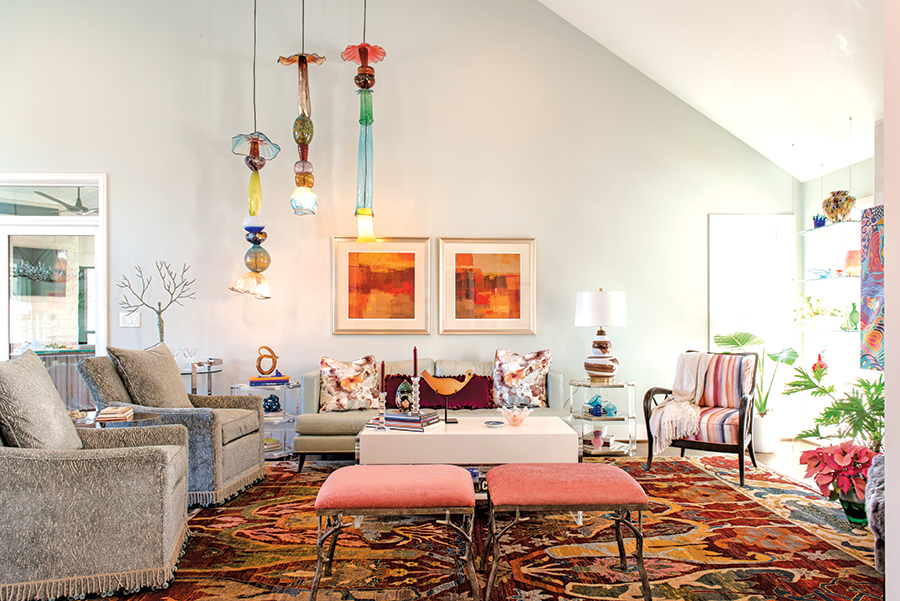 “I don’t think there were any right angles in the entire house,” says Jay.

It was funky, but they liked it.

And so, before they made an offer, Julie called up her tennis buddy, Marta Mitchell (as in Marta Mitchell Interior Design), to give the house her expert eye.

“It’s got good bones,” Marta told them. “We can make this place whatever you want it to be.”

Obviously, they would want fresh paint on the walls and new floors. (Many of the tiles were broken or chipped, Julie explains, and an uneven foundation would render all furniture askew.) But there were two major problems that the Brennans wanted to address: a lack of storage space — for all Julie’s dishes, Jay teases — and a fireplace obstructing the otherwise uninterrupted view of the lake from the living room. While they were at it, they figured, they just might be able to move that wall out a bit to invite even more light into the space. And they wanted to add a screened porch.

Having decided to save up funds to tackle the projects “all at once,” the Brennans moved into the house as it was and lived there for four years. 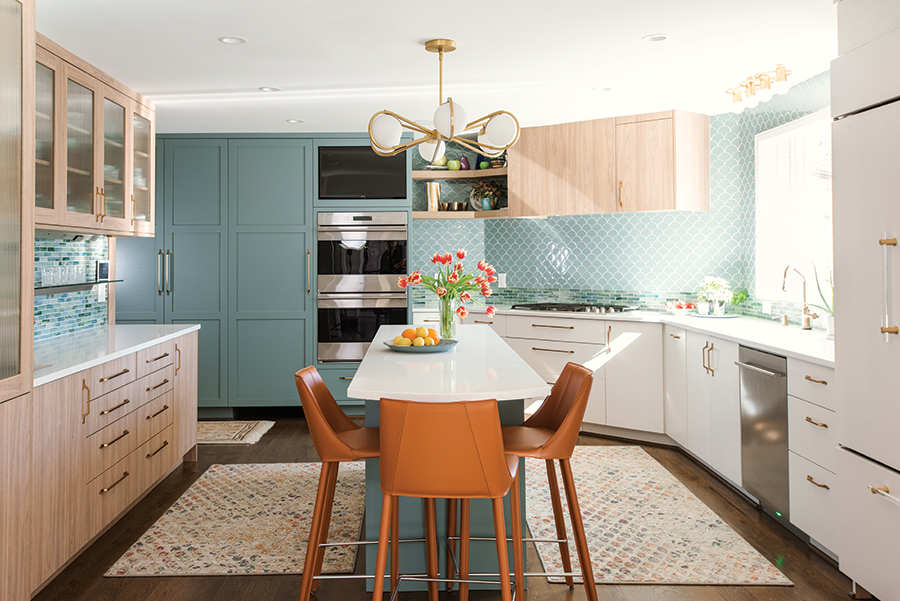 In spring of 2019, at long last, they were ready to move forward with the renovation. Their vision was simple enough. But following the discovery of water damage and mold in the walls, plans changed.

“Rip everything out,” said Jay.

Marta Mitchell drew up blueprints (there were none to be found), and with the help of Frank Chaney (architect) and Pat Parr of Classic Construction (contractor), the team got to work, making the best use of the space and taking full advantage of the opportunity to start from scratch. Not only would the crew resolve the storage dilemma and enhance the Brennans’ view to the water, but they would also transform wasted space into an additional bathroom (main floor) and an artist’s loft accessible via floating staircase through Jay’s second-floor home office. 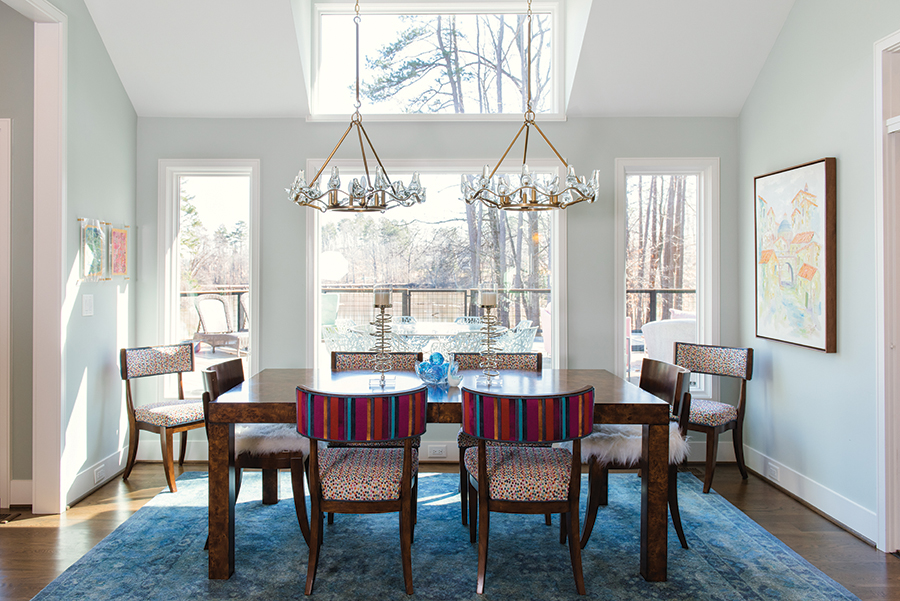 “We were out of the house for almost 15 months,” says Jay, co-founder of a company that connects innovative startups with health care systems such as Cone Heath. Being displaced for over a year might have been disorienting enough in “normal” times. Never mind in the midst of a global pandemic.

But in July of 2020, the Brennans moved back into their home, which was transformed from the inside, out.

Inside, the eye dances across lively, polychromatic silk rugs and hardwood flooring, a miscellany of colorful art and sumptuous furnishings, then on through the back windows, which, original fireplace gone, make the deck and backyard feel like an extension of the interior. In the living room, abstract prints pop against muted walls and sunlight flickers through an avant-garde handblown glass light installation suspended from the vaulted ceiling like something straight out of a Chihuly exhibit. 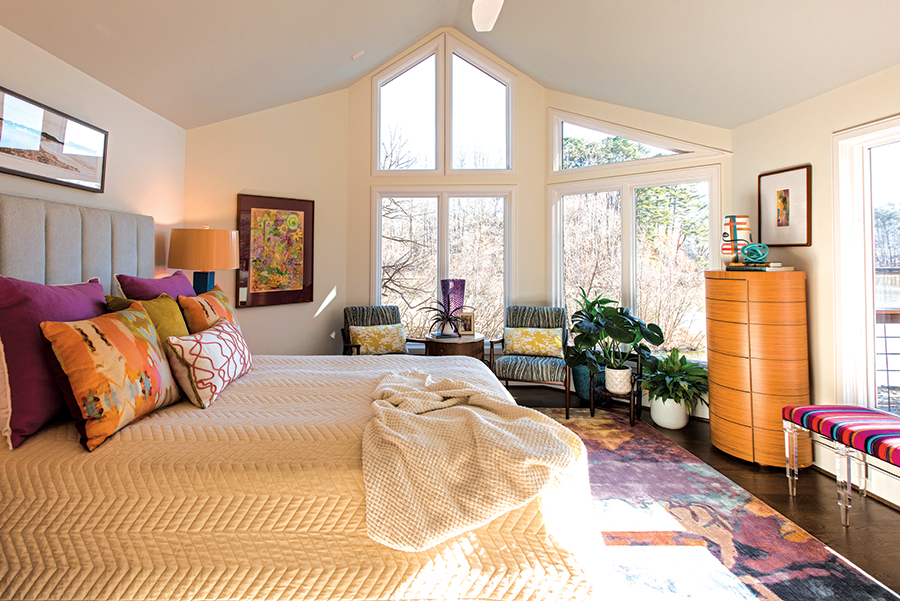 “We commissioned those,” says Julie of the glass pendants created by Ohio artist Doug Frates, who she and Marta discovered at High Point Market.

An open floor plan allows copious natural light and seamless flow from living room to dining room, where a matching set of bird chandeliers hangs above a Hooker table with chairs upholstered in fabrics most designers only wish their clients would let them pair up.

“It’s quite unconventional,” says Julie of the prismatic polka-dot-and-stripe combo. But Marta Mitchell and Annelise Tikkanen, MMID’s design team on this project, were clear on what Julie wanted.

Marta Mitchell describes the interior as a “unique reflection of the Brennans’ vision.”

“Comfort and function being top of mind,” she adds, “this house is now open and airy and lends itself for everyday living and for entertaining large groups — hopefully in the not-too-distant future.”

The living-and-dining area opens to the “screened porch wing,” where a 60-inch flat screen is mounted above a modish gas fireplace that no longer obstructs the view of the lake.

“We get a breeze from both sides, so it’s comfortable out here even in the summer,” says Julie.

Plus, Jay adds, “We have one of those nice Big Ass Fans.” 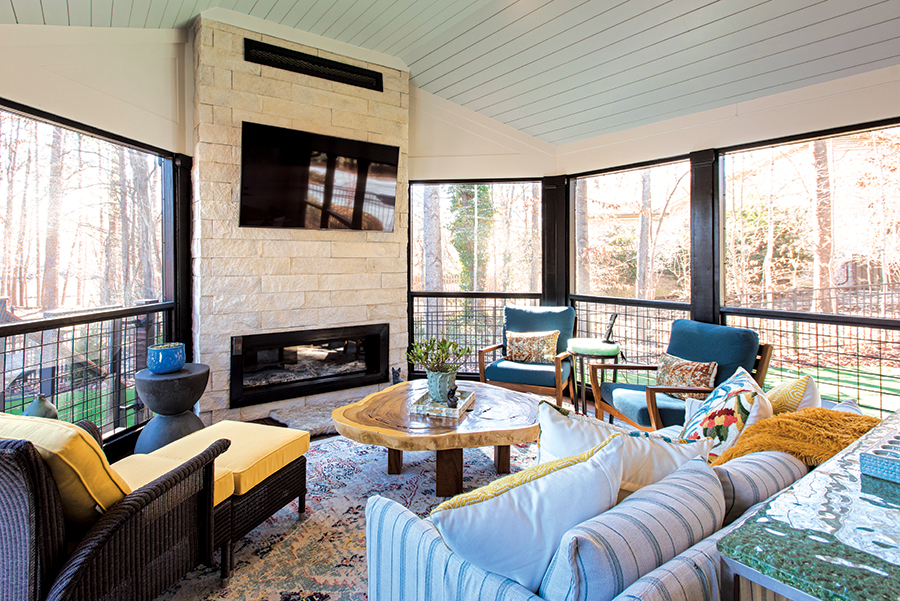 The contemporary kitchen, sleek and minimalistic, is decked in a sea of blue tiles and backlit glass-paneled cabinets that showcase Julie’s crystal. The Brennans love their hideaway fridge, sub-zero wine cooler and Wolf appliances, but Jay will tell you that the ice maker is his favorite feature. For Julie, it’s easily the hidden pantry, which has “tons of storage for all my porcelain.”

In the master suite, where one of Julie’s paintings picks up colors from the abstract pastel rug, the Brennans now have His and Her walk-in closets, each with a window to let in natural light. But the best view of the water is from their bed — or the adjacent deck, where two orange rockers await coffee at sunrise.

Besides the den (dark by design) and fitness and laundry rooms, there’s only one other room (upstairs) that doesn’t have a lake view. 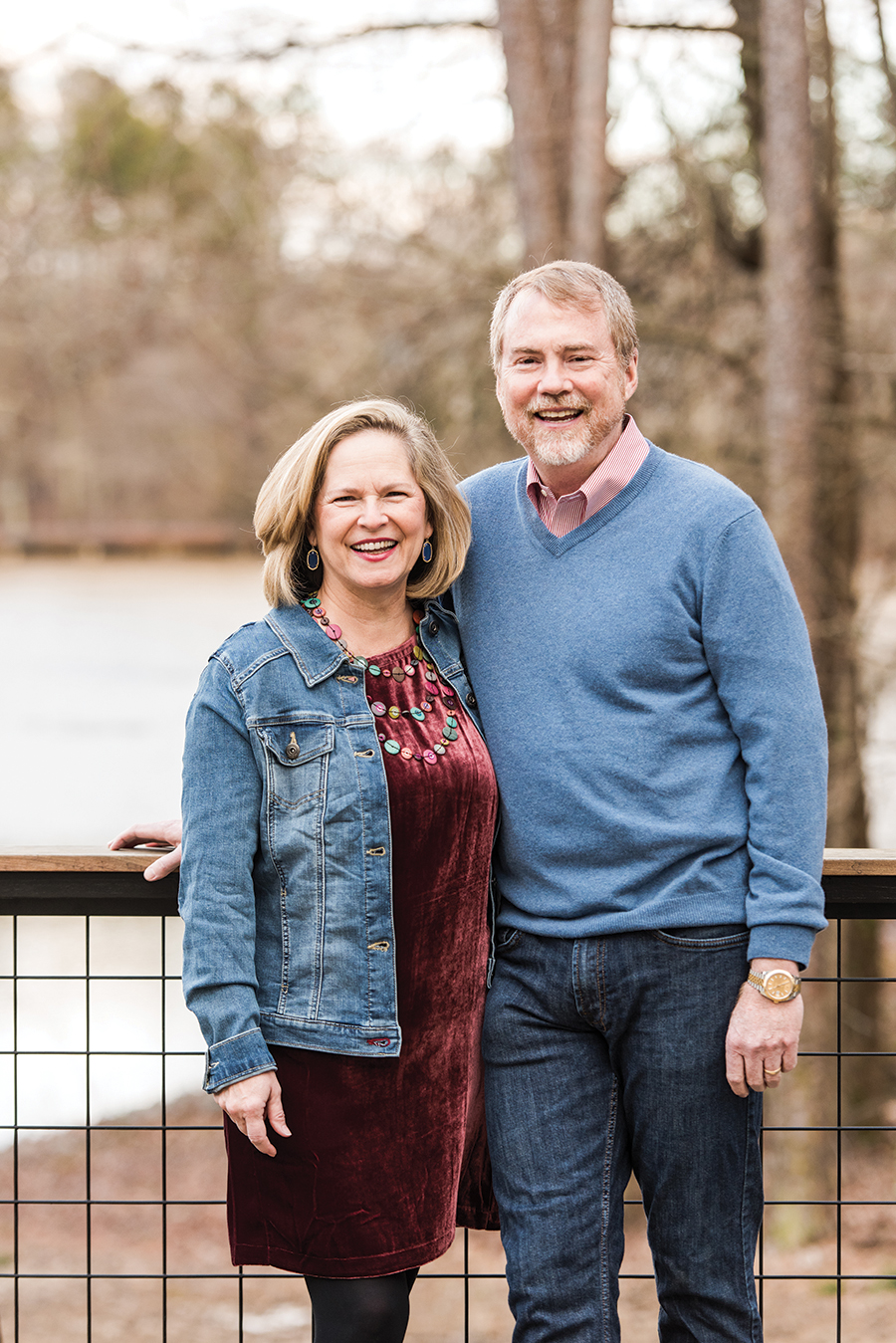 Nicole, 18, and her dog, Omar (a German shorthaired pointer mix), occupy a purple bedroom with a built-in wardrobe, fringe pendant lights and a small gallery of her own bold and colorful paintings.

Actually, Omar has a bed in nearly every room.

And he’s not the only resident smitten with the entire house.

Although Jay admits the renovation was much more extensive than he could ever have imagined — “let’s just say the budget and I were no longer well-acquainted by the end of the project,” he says — he and Julie pulled out all the stops and couldn’t be happier.

So, there you have it. They weren’t looking for it — and this house found them, more than they found it — but the Brennans are convinced that the house at the edge of Lake Jeanette was always meant to be theirs.  OH