Warning: "continue" targeting switch is equivalent to "break". Did you mean to use "continue 2"? in /var/www/wp-content/themes/jupiter/framework/includes/minify/src/Minifier.php on line 227
 Our Crown Jewel – O.Henry Magazine

I exit the cockpit of a F2H Banshee Navy fighter jet, walk past the 20 mm cannons mounted on the fuselage and, surveying unfamiliar surroundings, gaze across a pristine lake. In the distance, my brother and sister are waving me over from an approaching train, steam bellowing from its bulbous black smokestack as it chug-chug-chugs to a halt.

I am 7 years old, and I’m with my family at Country Park.

Many children of Greensboro have similar memories. And lucky for all of us, public parks and recreational facilities were central to the city’s vision of a 20th century urban center. The crown jewel of Greensboro’s green space has always been Country Park.

Located off North Lawndale Drive, Country Park is the nucleus of a 217-acre entertainment destination that encompasses the Greensboro Science Center (a science museum and zoo) and its OmniSphere Theater; Jaycee Park and its Stoner-White Stadium; and Spencer Love Tennis Center.

It’s almost hard to imagine Greensboro without it.

In 1901, a 14-acre tract of lowlands flanking North Elm Street was the first land set aside for an official city park. Today we know the space as Fisher Park, but at the time, it was merely a swampy patch of undeveloped land likely donated to the city in an effort to save the surrounding neighborhood from overdevelopment. In coming years, sinuous walking trails were installed, allowing the public to fully enjoy its bucolic environs at long last. Also in 1901, Douglas Park opened on the south side of town, transforming an 8-acre plot of woods into a vibrant gathering spot with walking paths, a playground and a basketball court. It even had a stream running through it.

In 1902, far outside of city limits, the Greensboro Electric Co.’s streetcar system leased what was known as Lindley Park, where a dance pavilion, man-made lake, bowling alleys, a Vaudeville theater and refreshment booths once drew happy crowds. The iron-and-stone entranceways on Spring Garden are all that remain of that ancient amusement park. Yet somehow, without all the flashy accoutrement (showgirls, candlepins and ice skating, for instance), Lindley Park endures as a sacred place for relaxation and solace. 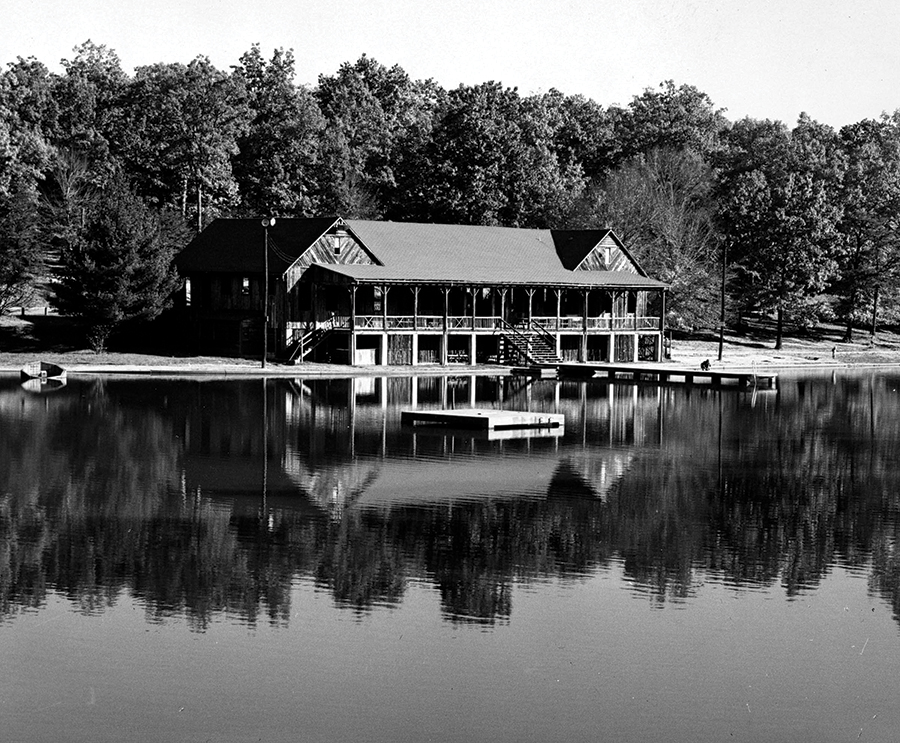 This sudden turn-of-the-century mushrooming of public parks was Greensboro’s bid to join a national social movement. The idea was to provide places to contemplate nature and recreate, reducing the stress and strain of urban life. Following the lead of Frederick Law Olmsted’s Central Park in New York City, cities from coast-to-coast began adding parks to their urban landscapes.

Initially modeled after the grounds of manors and estates in England, these parks catered mostly to rich families. However, over the decades, parks began accommodating the working-class families with playgrounds and recreational facilities. The prevailing theory at the time was that public money was well spent on these projects because they could potentially reduce class conflict, socialize immigrants and get kids off the streets. Building parks was a laudable social goal and demonstrated a city’s sense of social responsibility.

And so it was in Greensboro. In an outstanding demonstration of civic pride following the Great Depression, volunteers, city workers and laborers from the Public Works Administration worked together to turn 79 acres purchased in part with cemetery bond funds into Country Park. 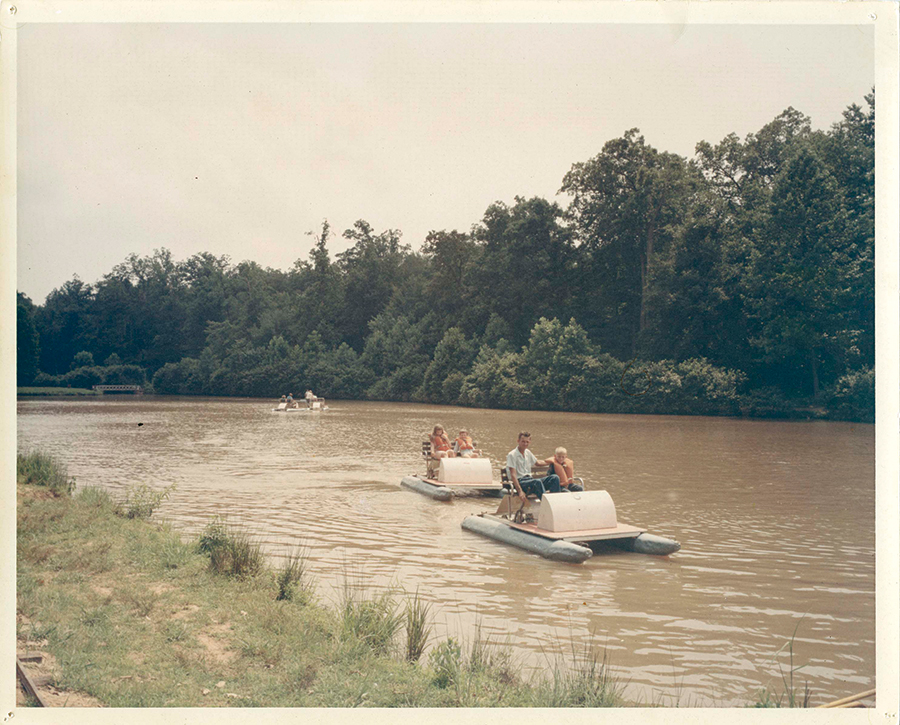 The result of their efforts opened in 1934. When temperatures sizzled that summer, the park attracted nearly 2,000 visitors per day. A wooden superstructure known as The Bath House, situated along the eastern edge of Lake Sloan, the park’s northernmost and largest body of water, is where swimmers could change and shower. Just a few feet away was a high-diving platform. A vertical aquatic merry-go-round was positioned in the middle of the lake, and there was even a sandy beach-like shoreline for sunbathing. Swimming was suspended during the polio outbreak of 1948 but resumed in the 1950s.

Around 1952, the park welcomed a one-fifth scale MTC G-12 train that maneuvered around on a 12-gauge track. That kiddie sized choo-choo was in operation every afternoon in the summertime. Nearby, a full-size Greensboro Fire Department ladder truck and a Southern Railway boxcar acted like magnets, attracting children who couldn’t wait to climb into, up on and around the stationary machines.

By the 1960s, two other man-made lakes sparkled on the property, where rowboats and pedal boats floated in endless, lazy circles, with mallards and Canada geese watching from the shorelines. Fishing was allowed with a permit, and seven picnic shelters were scattered around the lakes with free-standing grills. The park had an archery range, ball field and a craft shop where you could buy a bottle of Pepsi for five cents. 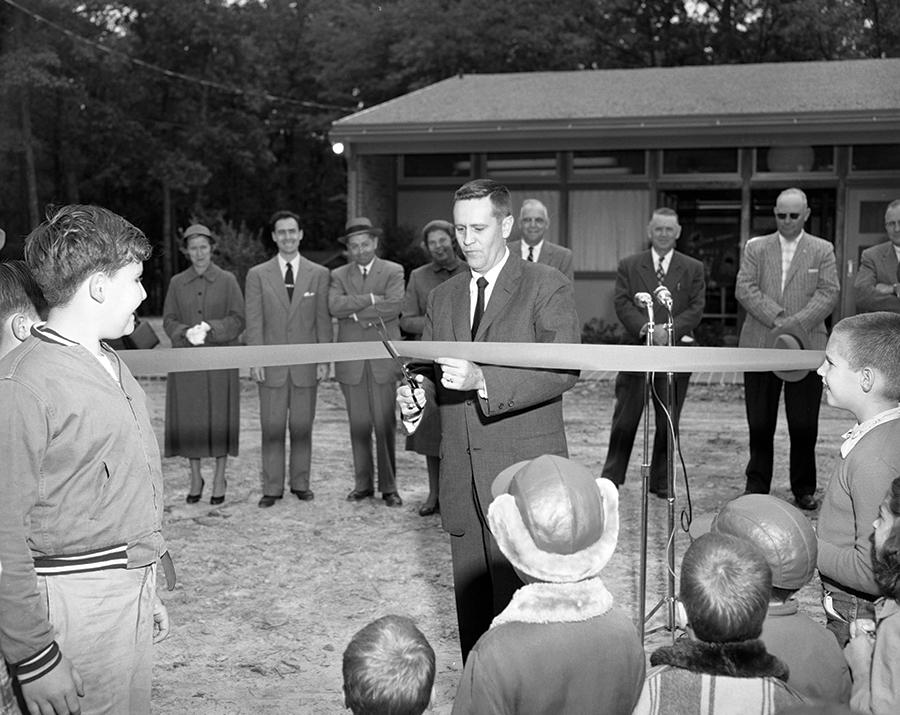 A tram system shuttled motorless city folk about the park on weekends and holidays. Under the direction of Harvey West, the Municipal Band performed weekly Sunday night concerts from a pavilion located on the south side of Lake Sloan.

The Country Park train was replaced in the summer of 1959 by a much bigger attraction when Greensboro resident W.A. Cameron purchased a trio of railroad cars pulled by a 1,700-pound Crown steam locomotive nicknamed “The General.” Based on the design of an 1855 Western and Atlantic Railroad passenger train of the same name that had been commandeered by Yankees during the Civil War, the attraction was a hit. There was even a mini cowcatcher (exactly what it sounds like) up front.

The General was supplanted a few years later by a homemade contraption with faux caboose and a kiddie cage that looked like it might have been designed by the Merry Pranksters on LSD.

(The original Country Park railroad landed in the possession of a young, up-and-coming plastic surgeon, then was later purchased by a Climax couple who sold it on eBay in 2008.)

The first of two decommissioned Korean War-era F2H Banshee Navy fighter jets from Cherry Point arrived at Country Park in January of 1959, decades before playground equipment safety became a public-health issue. Donated by the Marine Corps, the jets were installed on the east side of the lakes; on one side of the planes, a ladder offered kids access to the cockpit, which they could (somewhat) safely exit via playground slide on the other side of the plane. That said, some residents still have scars from mounting those rusting artifacts, arms or legs singed from hot metal surfaces. And with less than adequate guardrails, I’m probably not the only kid that toppled off of those slides. The jet planes were removed in the late-1960s. 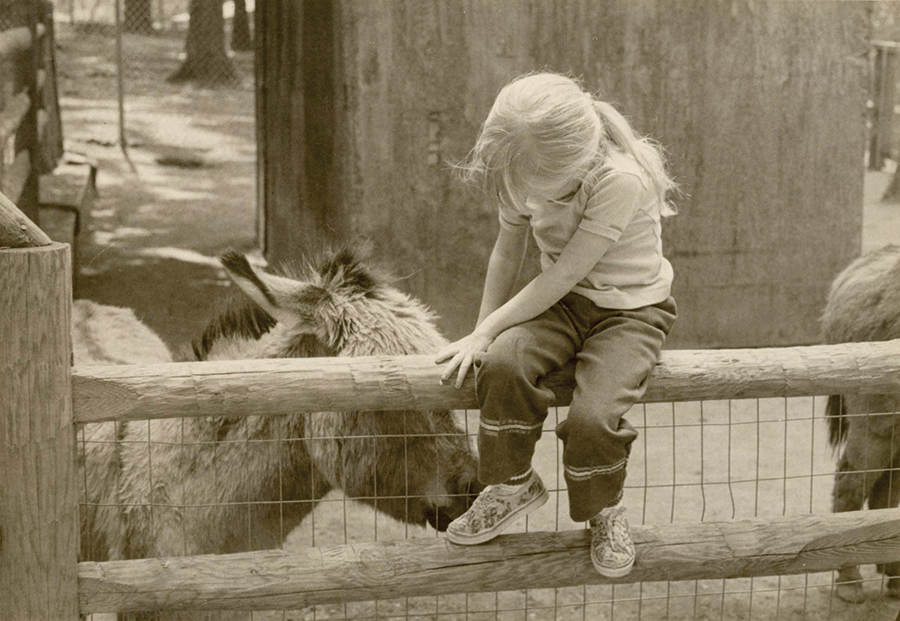 From day one at Country Park, the streets leading in and out of the park became something of a shortcut for drivers with a need for speed. Not ideal. Thus, in 1960, supplementary access was closed off in favor of a single entrance for automobiles. Around that time, the central body of water was filled in to allow foot traffic access to a 1.6-mile paved circle around the circumference of the park. That’s likely when swimming was discontinued.

As cities across the nation turned to more of a recreational-and-sports complex model for urban parks, construction of the Lewis Center’s multipurpose sports facility was completed on the west side of Country Park in 1964. Because the Greensboro Jaycees raised most of the money for the project, a 75-acre plot abutting the west end of Country Park was christened Jaycee Park in the 1970s, including three football/soccer fields, tennis courts, a Pony baseball field and volleyball courts.

As the zoo aged, concern mounted about the animals’ welfare and their being housed in “inadequate structures.” After a “Save Our Zoo” campaign in 1969, the idea of a new and improved zoo turned into a contentious, on-and-off-again affair, but thanks to a last-minute infusion of cash from the city, the new zoo finally welcomed their first visitors in spring of 1973. It was designed sort of like a big, rambling barnyard, with an indoor petting zoo and enclosures for miniature burros, coyotes, a cougar, an American Bison, two elk, black swans, cattle, opossums, turkeys, a llama and Bruno the bear, who had been a major attraction for 14 years at that point. Admission was 50 cents — 25 cents for children.

The Junior Museum, also commonly referred to as The Children’s Museum, got underway in 1957 — a collaborative effort of the Junior League, City Council and Greensboro Parks & Recreation. The staff (mostly Junior League volunteers) taught children about natural sciences, how to care for the small animals on site and how to help injured critters and birds. This facility would eventually evolve into the Natural Science Center, which now threatens to eclipse Country Park as a tourist attraction.

As a teenager in the ’70s, if friends wanted to have a backyard barbecue, Country Park was the preferred venue. (Who wanted to hang out with anyone’s parents?) In those days, the woods were so thick around the picnic areas that you couldn’t see past the tree lines. There was almost no foot traffic — a lone jogger, perhaps. It legitimately felt like you were luxuriating in the countryside.

Plans are afoot to make what might seem to be radical changes for the newly christened Battleground Parks District. Effectively erasing the largely undeveloped parcel between the Greensboro Science Center and Country Park, the overall concept proposes constructing boardwalks, viewing platforms, wooden abutments jutting into the water, weirdly-shaped climbing structures for kids, accommodations for food trucks, an amphitheater, a waterfall river, additional shelters, and — of all things — a zip line.

I don’t know what it says about our society that viewing stations would be requisite in order to ponder the existence of trees and waterways. Enticing to the zip line crowd, I suppose.

While neighborhood parks like Fisher and Lindley have remained virtually unchanged over the last half century, Country Park, on the other hand, has continually evolved with the times, following national trends about just what constitutes a park — and adapting to the recreational needs of each new generation. While the city’s footprint has stretched well beyond the park and its surrounding facilities, Country Park remains a tranquil oasis for fishing, exercising, meditation and socializing with friends and family. It’s nice to know that will never change.

And, who knows, I may even ride that zip line one day.  OH

The author of five books, Billy Ingram was born and raised in Greensboro. Thanks to Nollie Washburn Neill Jr. for pictures of his trip to Country Park taken by his father in the early-1960s.