Learning about love on a deadline 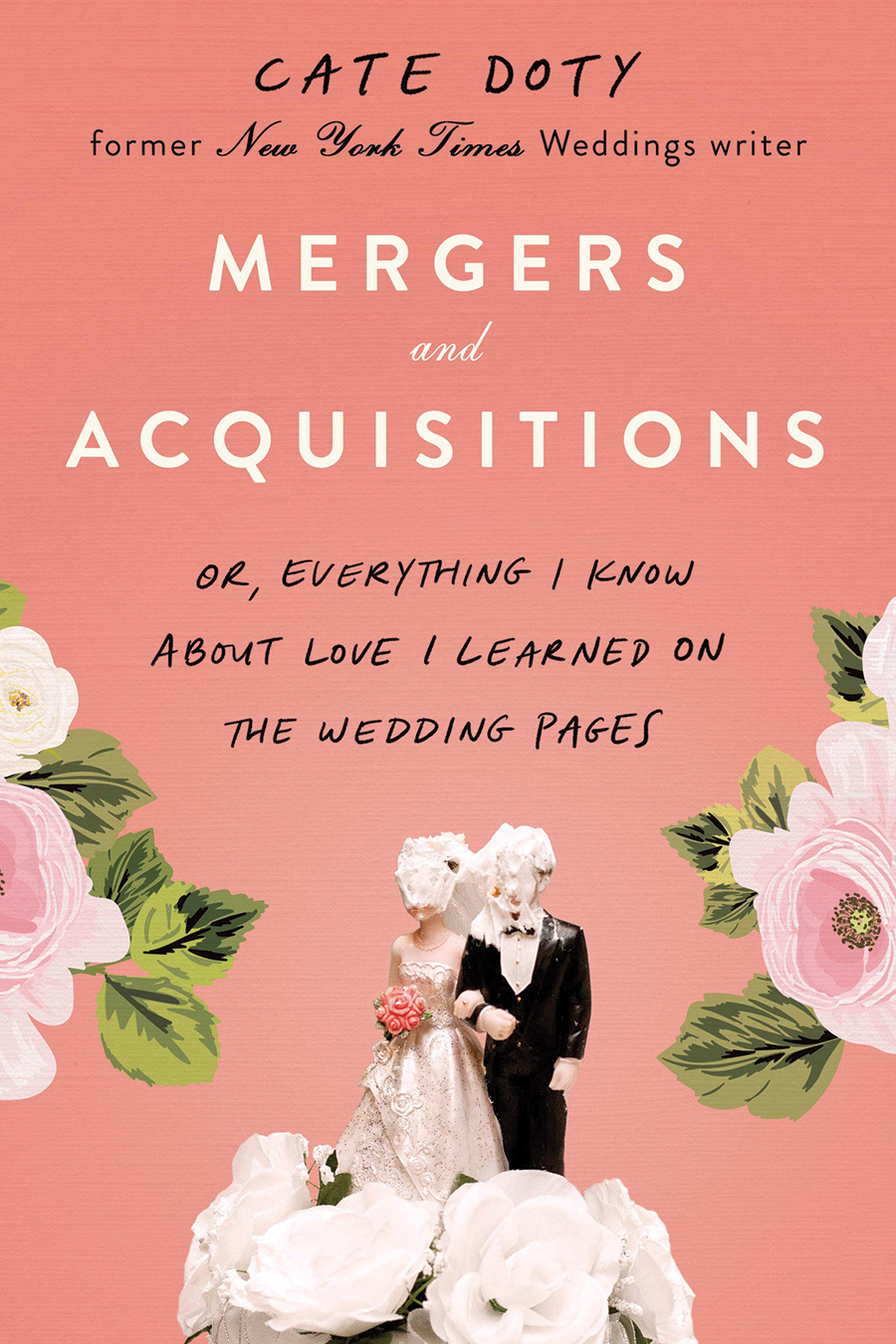 If you’re someone who likes to soak in every detail from The New York Times Vows section — and even if you’re not — Cate Doty just might have a book for you to tuck into your beach bag or snuggle up with beside a late fall or early winter fire. Her first book, Mergers and Acquisitions: Or, Everything I Know About Love I Learned on the Wedding Pages, published in May, builds on her experiences as a wedding announcement reporter for the Times. She likes that her memoir has been described as a breezy beach read, but it’s much more.

It’s a sprightly written coming-of-age story that gives readers a peek into how the Vows columns and marriage announcements get onto the newspaper’s pages while also revealing a young reporter questioning those traditions and institutions. Don’t expect a tell-all about those couples whose carefully crafted wedding resumes include first dates after a Harvard debate club meeting, or mentions of grandparents or parents with penthouse apartments overlooking Central Park.

This is a love story, an account from a witty, self-deprecating author who readily acknowledges the irony of poking fun at people who go to great lengths to get their wedding announcements into the Times, then having the news of her own marriage published there, too.

On a hot August morning on the stone steps of Wilson Library at UNC-Chapel Hill, Cate Doty — born in Raleigh and raised in Fayetteville — was sitting with her husband, Michael, watching students rush along the campus sidewalks between classes. Nearly two decades ago, Doty was one of those students herself, unsure of the path she would chart from those brick walkways. During freshman orientation, she wandered into the offices of The Daily Tar Heel, a feisty student newspaper that has launched many a storied journalism career.

Now, she’s back on campus, a published author, teaching in the journalism school and reminiscing about what compelled her to share her own wedding story after getting her feet wet writing for The New York Times wedding section. Doty takes her readers on a journey from her student days and a steamy romance on the cusp of adulthood in Chapel Hill to the nation’s capital and then New York, a city that woos its young arrivals while also putting them through their paces.

Along the way, she gives glimpses of Fayetteville, the Cumberland County city where she got a taste of the country club life, cotillions and what it was like to live on the edge of privilege in a complicated South while also questioning whether she was one of the advantaged or someone on the outside looking in. There are snippets from Swansboro, where her mother lives now, and peeks inside one of the largest newspapers in the world, where she worked as a researcher, news assistant and eventually editor.

Through the trials and tribulations of falling in and out of love while writing wedding announcements, Doty falls head over heels for a city, a profession and a fellow journalist — the same guy sitting with her below the marble columns of Wilson Library. It’s a book that makes you think about the nature of weddings, the institution of marriage, the stories behind the unions, and why anybody needs to read about the floral arrangements, dress designs and guests at the ceremony.

“What’s in a wedding announcement? After all, weddings will (and do) happen without one,” Doty writes. “In fact, most American nuptials, successful or not, go unnoticed by news organizations and unannounced, except on social media, and the occasional church bulletin. But the weddings we wrote about for the Times — they were different. They were, generally speaking, wildly expensive — far beyond the average American expenditure of $44,000. But they were more than the sum of their gilded parts. They were mergers of families and bank accounts, of aspirations and hubris. And these announcements were battle plans, and business plans, of class and warfare. They were incredibly difficult to obtain, which meant that they were worth far more than the soy ink they were made of.”

Doty transports readers through the Times offices to the desk of the wedding section editor, who quickly opens her eyes even wider to a world of haves and have-nots, and an exclusive club of brides and grooms who can be demanding, difficult, defiant and on occasion downright devoid of decency. The New York Social Register played a part in which of the 200, or more, wedding announcements submitted each week would land in the 40 to 45 available slots that readers of the Times print pages lingered over on Sundays. Lineage back to the Mayflower mattered, as did social and financial connections to Newport, Palm Beach, the Hamptons and the Upper East Side.

There’s a revealing story about one senator, “a craven, attention-hungry man,” who slammed down the phone on Doty in outrage as she asked him the same kind of fact-checking questions put to all who expect their nuptial announcements to appear in the Times.

Doty, who’s now 42, started writing for the wedding desk in 2004 and did so off and on for six years. The first three seasons she chronicles in her memoir are so descriptive that you can almost hear the phone messages blaring on Monday mornings after an aggrieved newlywed calls to complain about something put in — or left out of — their special announcement. Following the counsel of her legal team, Doty changed the names of editors, colleagues, brides and grooms she worked with and reported on in her book.

One name was unchanged, however, that of her husband, Michael. He worked at the Times, too, starting there as a news clerk and ending on the politics desk in 2016 after the primaries and general election. They both took buyouts that year when facing new demands of parenthood and changes at the newspaper.

In Doty’s memoir, readers see the confusion she wrestles with after Michael, her friend and lunch partner, invites her to a play in which he’s a character running wild in the bayou on a New York stage, completely naked and covered with mud.

“The lighting was artfully done so that you couldn’t see everything, but I saw nearly everything,” Doty wrote. “My face burned like lava. It trickled down my neck and my body, and I thought, Well then.”

She delivered her blunt critique of the play at lunch, blurting out a question they still playfully debate today, just as they do in the pages of the book. “‘You didn’t tell me you were going to be completely naked,’ I said over my turkey cheeseburger at the Westway. He looked startled, and then angry. ‘Yes, I did,’ he said prickly. ‘I wouldn’t have not told you that.’” They eventually had their first kiss on the steps of the New York Public Library between Patience and Fortitude, the marble lions that flank them.

Though it’s a city they’ve left behind for their home in Raleigh where they’re raising their first-grader and their dog, New York still occupies a huge space in their hearts.

They were both Southerners in their City of Dreams, he the child of divorce with a nomadic sense of place, and she from a line of North Carolina women who, among other things, insisted that you don’t put family silver in the dishwasher for fear of damaging the patina. They challenged each other on their traditions and roots.

North Carolinians may recognize a bit of themselves in the family and characters that come alive through Doty’s funny, warm and introspective words. They might question why a woman seemingly so critical of wedding announcements and the carefully crafted displays of stations in life that go along with them ends up writing a book about her own wedding story.

“I’m not above the fray,” Doty added. “But I also think it’s important, as someone who comes from this background, to talk about it. To poke holes in it.”   OH

Anne Blythe has been a reporter in North Carolina for more than three decades. She has covered city halls, higher education, the courts, crime, hurricanes, ice storms, droughts, floods, college sports, health care and the wonderful characters who make this state such an interesting place.