How I really feel about birthday suits

“Dad! Put your shirt on,” my daughter scolds as we leave the beach at Zahara de los Atunes, a shoreside village on the Atlantic west of Gibraltar.

“What?” I shoot back. “We just left a beach where a third of the women were topless, and you want me to put my shirt on?”

Sarah explains that no one in Spain with any couth goes shirtless on the streets in beach resorts — or anywhere else in public, except bathing venues. 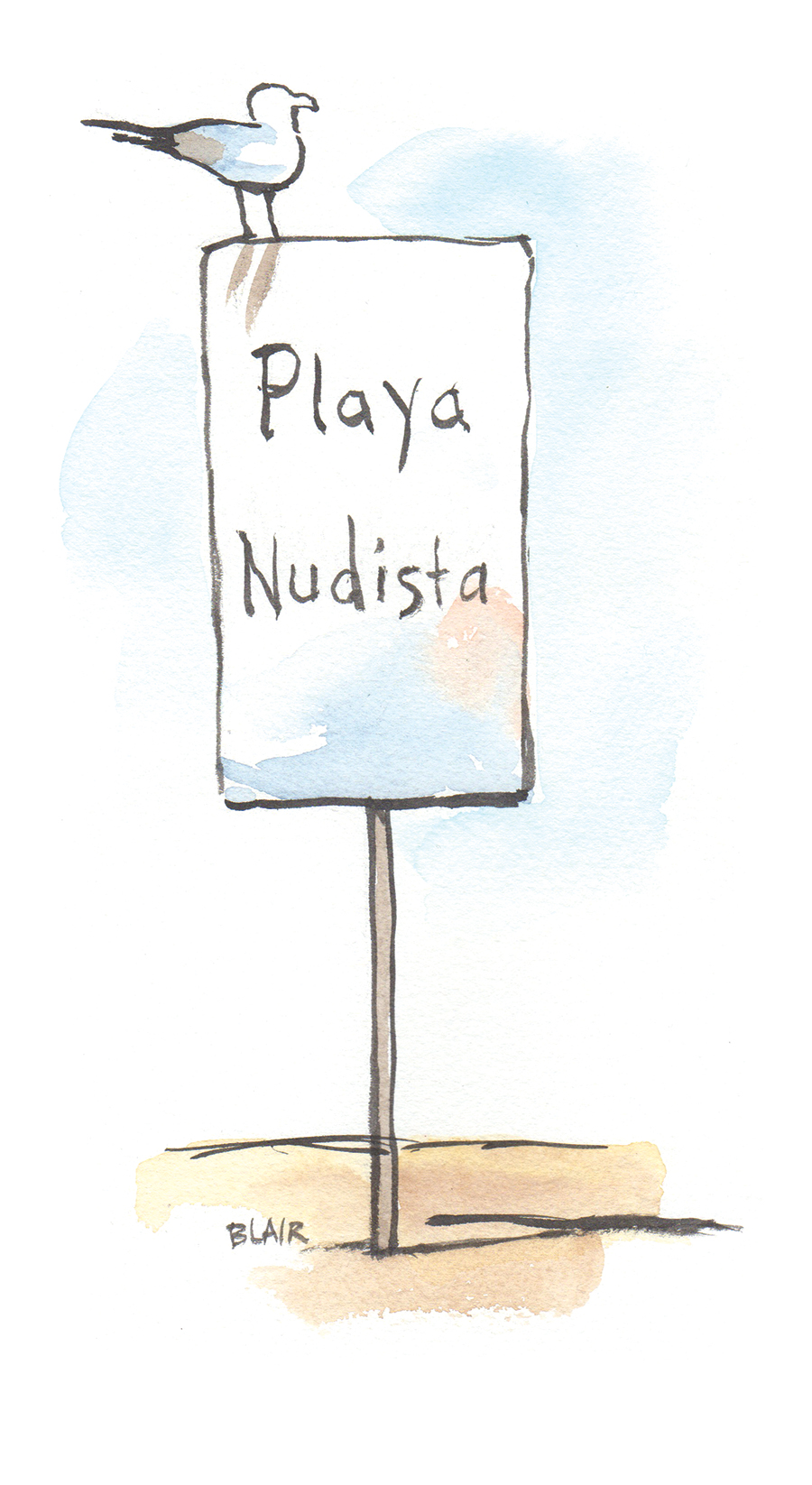 Here in the states, I can jog down the street shirtless without anyone blinking an eye (though they might look the other way, given my physique). Only in nudist colonies (like the one outside of Reidsville you read about last month in O.Henry) do women and men go around in their birthday suits. But, oh, those sexy Europeans.

Each time my wife, Anne, and I come back from visiting our daughter in Spain, my hiking buddies are envious of my basking in the Mediterranean sun surrounded by bare-breasted beauties. “Did you take any pictures?” they ask.

Back in the spring, only a few days after Spain lifted their COVID ban on American tourists, I dipped my toes in the water at a nude beach. Anne, Alice and I were visiting Sarah on the Spanish island of Mallorca. We had driven to a remote beach near S’Albufera, a vast marshland preserve on the east coast. When I set off for one of my notoriously long walks, Sarah said, “Dad, you’ll probably see a lot of nudists. Try not to stare.” In fact, Sarah knew I had stopped fixing my gaze on nude sunbathers several years ago, not because I was tired of seeing stunningly trim and attractive examples of the human anatomy, but because of something she’d told me: “Maybe you’ve noticed that a lot of kids under the age of three don’t wear swimming suits over here. Nudity and toplessness are ways for adults to recapture those carefree, early experiences of being unencumbered with clothes, of feeling the sun and saltwater all over them.”

Walking down the undeveloped stretch of sugar-white sand, I saw moms, dads and kids building sandcastles without the advantage of any clothes. Elderly couples sunned together in the altogether. Single men and women walked and talked and swam unclad without appearing to me in the least bit sexy. In fact, the women wearing string bikinis seemed to be making a much more tantalizing fashion statement.

Some years ago, when nudism and the topless thing were brand new to Anne and myself, Sarah took us on a long hike. We were on the coast near Llucalcari (pronounced in Catalan “You Call Car-ee”), a village named for its once sacred woodland grove. A friend had told Sarah about an enchanting beach accessible only by a primitive, handmade ladder of grapevines and driftwood.  “It’s a favorite haunt for nudists,” Sarah told us. At the end of several hours of hiking, I eagerly scrambled down the vines and headed down a narrow path toward Homer’s wine-dark sea, only to encounter three nude 20-something women. They were headed back up the path to a spring where water poured from the hillside. We passed within inches of one another and I couldn’t help but notice their outstanding anatomical features — covered in dark purple mud that they’d smeared on themselves from the hillside as a self-administered spa treatment. I stood to the side to let them pass and smiled. They smiled back, a sticky, purple vision from head-to-foot, with only the whites of their eyes and teeth shining comically. As they passed, we all broke out in giggles.

“Given my experience in Spain,” I tell my hiking friends, “nudism in Europe is not all it’s cracked up to be.’”  OH

David Claude Bailey is a contributing editor of O.Henry. Although he doesn’t offer details, he claims the purple mud does, in fact, work wonders.