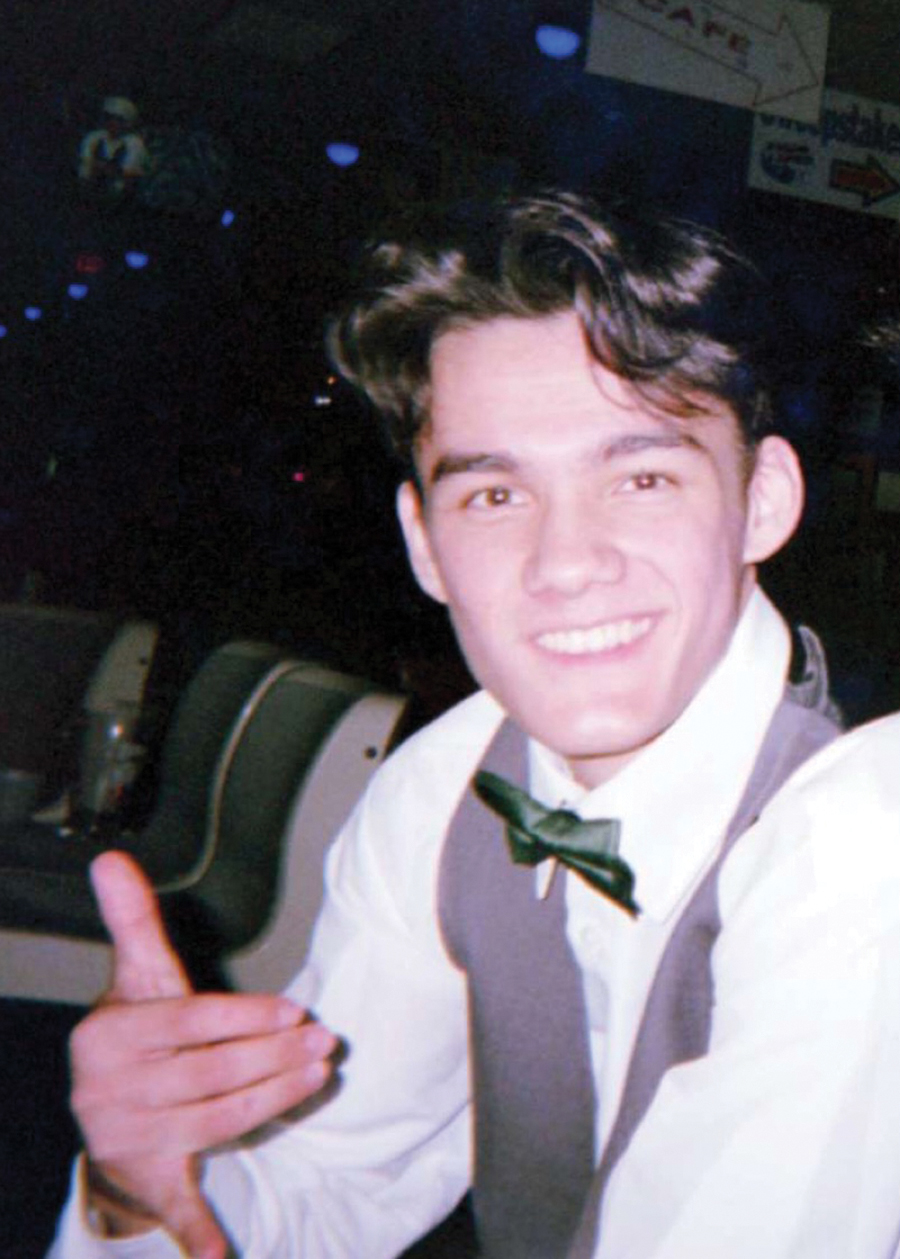 Over the years, 17-year-old Evan Harris has received gifts from his father that have sparked new interests and hobbies, including a guitar and a hiking backpack. But it was the Nikon D750 his dad gave him just over two years ago that opened up the door to a creative foray into photography. Armed with his brand-new SLR equipment plus a vast library of online tutorials and YouTube videos, Harris began shooting friends and family, discovering a passion for portraiture. It wasn’t long before he found that he had a knack for capturing people with pups.

Of course, any new hobby comes with new hobby needs, and Harris soon found himself buying new lenses, off-camera flashes and speedlights, purchased with earnings from working at Lowes Foods. After investing so much time and money into honing his craft, he was ready to make the leap into entrepreneurship. Harris’ warm and vibrant work focuses mainly on senior photos, including high school events such as High Point Christian Academy’s formal, and he shares it on Instagram at @evanharrisphotography.

“I have no artistic background. I never took any art classes,” says Harris, “but I’d read about AP Studio Art.” He approached the Advance Placement art teacher and asked about using photography as his medium. Harris didn’t quite meet the prerequisite of having taken two art classes, but because he’d shared his work on social media, the teacher told him he’d “seen his stuff” and allowed him to join the small class.

It was this class that prompted Harris to explore a subject, layers deep. He opted to consider the connection between humans and man’s best friend. “It’s kinda hard to fail someone taking pictures of dogs and people,” he laughs, his dark brown eyes gleaming. “The class has helped me go from just taking portraits of people to telling more in-depth stories.”

What started with the gift of a camera has turned into a potential pathway to Harris’ dreams. As he makes his way to Wake Forest University next month, he hopes to continue on his photo-journalistic journey, writing and shooting for the student newspaper, the Old Gold & Black, with an ultimate goal of one day being “a foreign correspondent somewhere or maybe a geeky columnist for The New York Times.” Being a guest contributor to O.Henry seems to us like a good start? OH 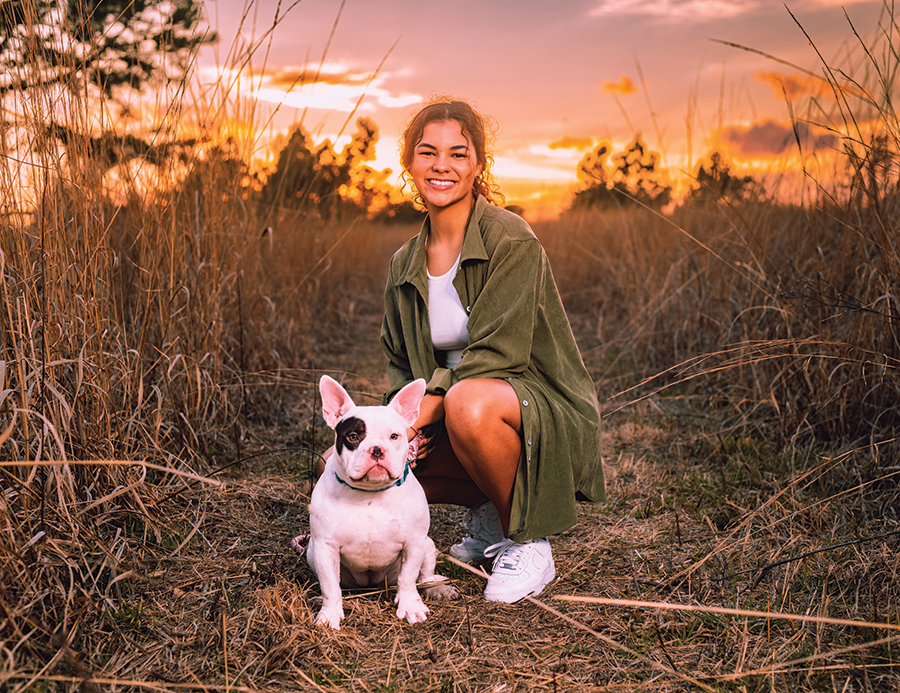 Pet adoptions across the country peaked during the pandemic. While many of Harris’ friends have had their pups for a while, Marlee’s family brought their American bulldog, Chyna, home in 2020. While still very young, Harris says she was the best behaved dog he photographed: “She just padded around and sat for the camera.” Some dogs are just born with it. Chyna and Marlee are pictured during sunset at Price Park. 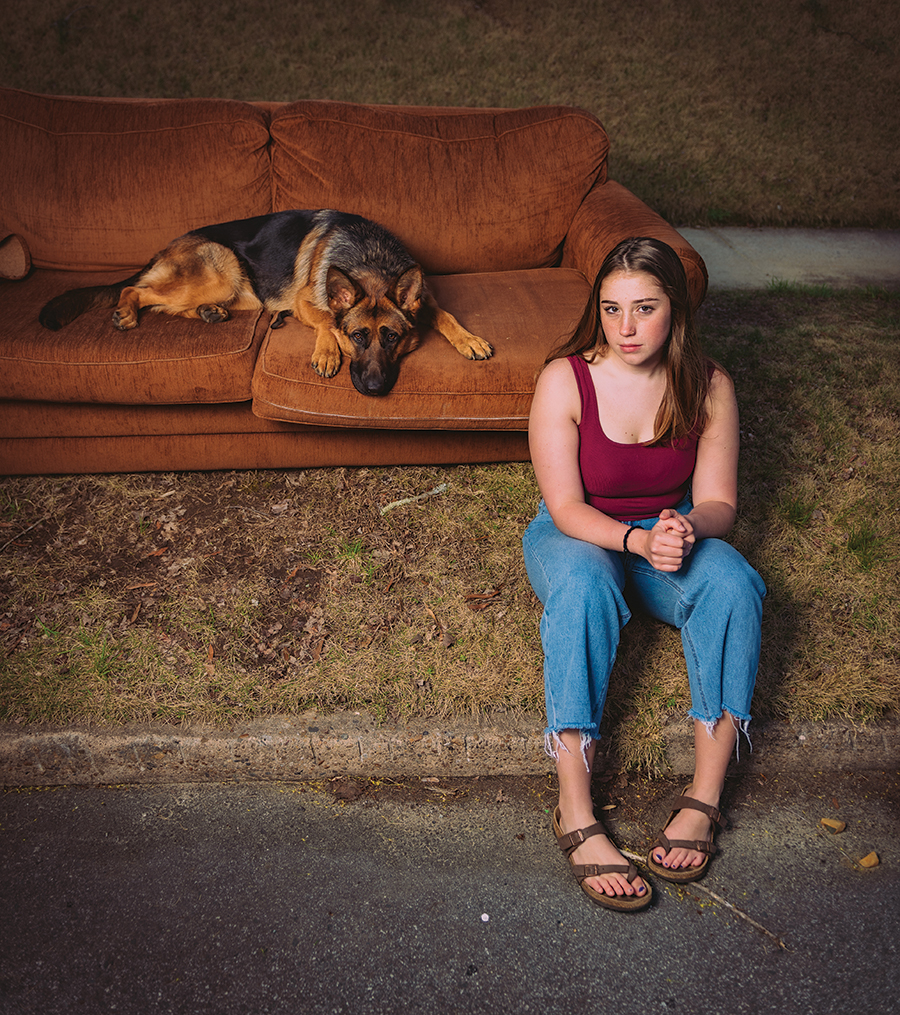 What’s the trick to getting these four-legged clients to pose for the camera? “A lot of patience is the key,” says Harris. And, of course, he is sure to bring treats. These man-and-dog shoots can be as quick as 20–30 minutes or last up to three hours. Pictured here is Emory with her dog, Gracie, at Lindley Park. 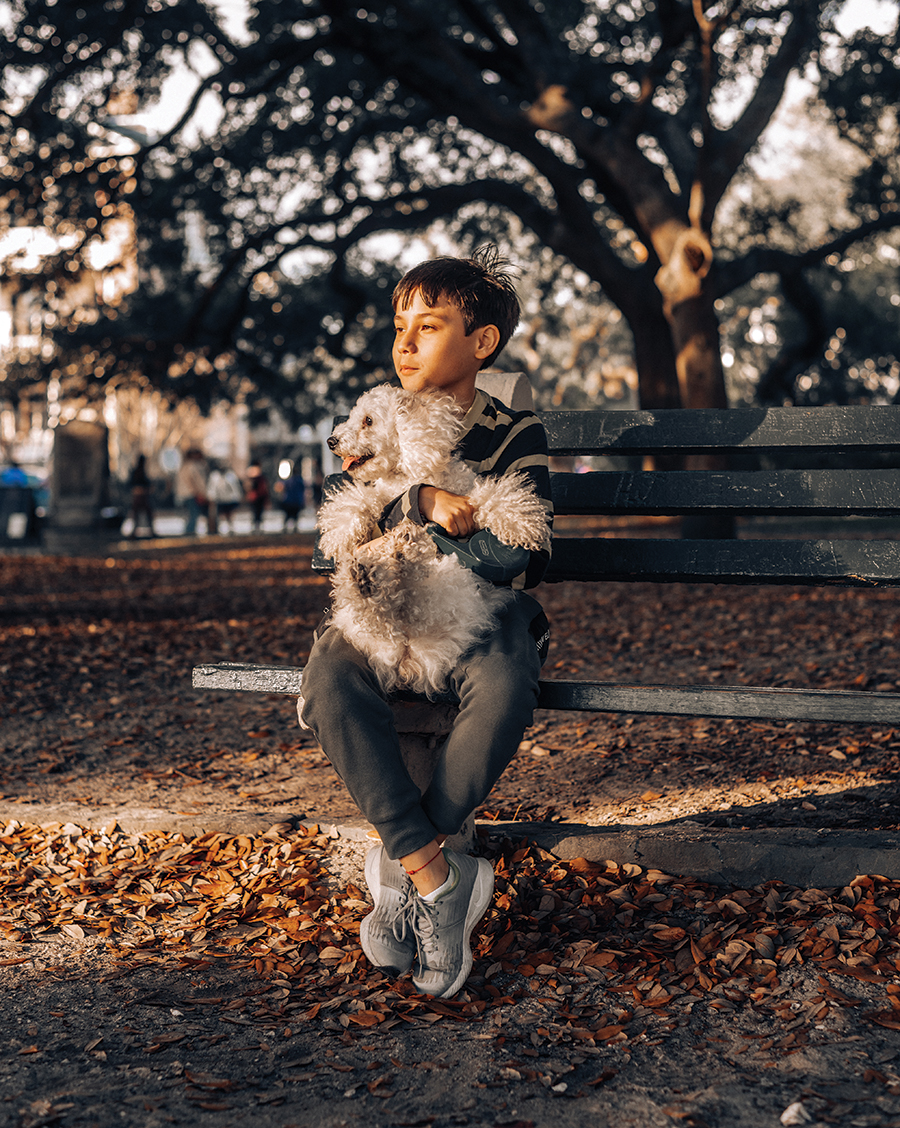 “They have us,” says Harris of the family’s own two dogs, a Belgian Malinois named Tuco, and Fluffy, who is a Bichon Frise. “She’s 6 and still has a super-high drive. They call it the ‘Bichon blitz,’” Harris says, explaining the rare opportunity he happened upon when his 12-year-old brother, Carson, sat with a relatively calm Fluffy on a park bench in Charleston, South Carolina. 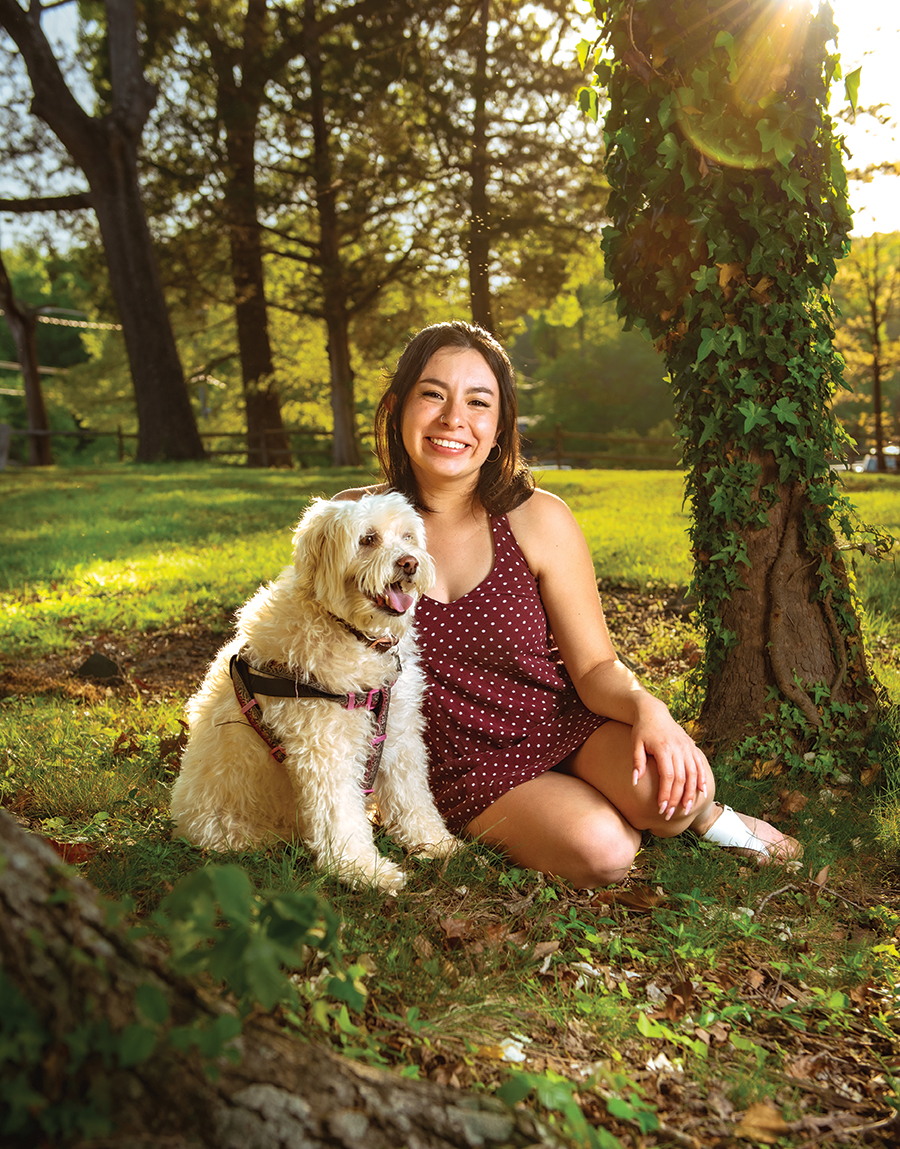 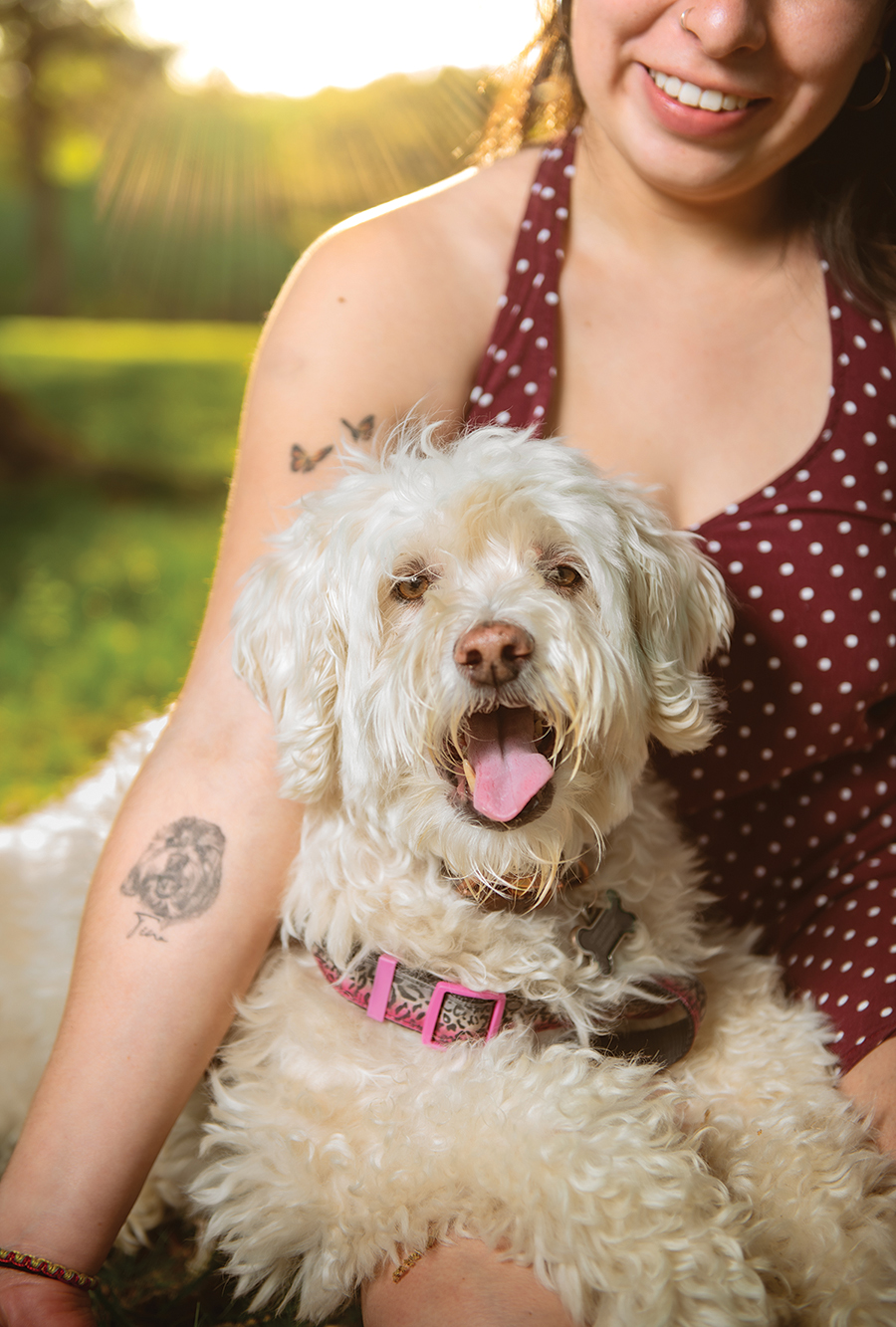 Home Is Where the Dog Is

Camila, who worked with Harris at Lowes Foods, left Columbia to come to the United States — as did her dog, Tina. Because of their origin-story connection, Camila has a tattoo on her forearm, featuring her shaggy companion, mouth open, perhaps in a smile. Harris captured Tina with the same expression, nuzzled in the crook of her owner’s tattooed arm. 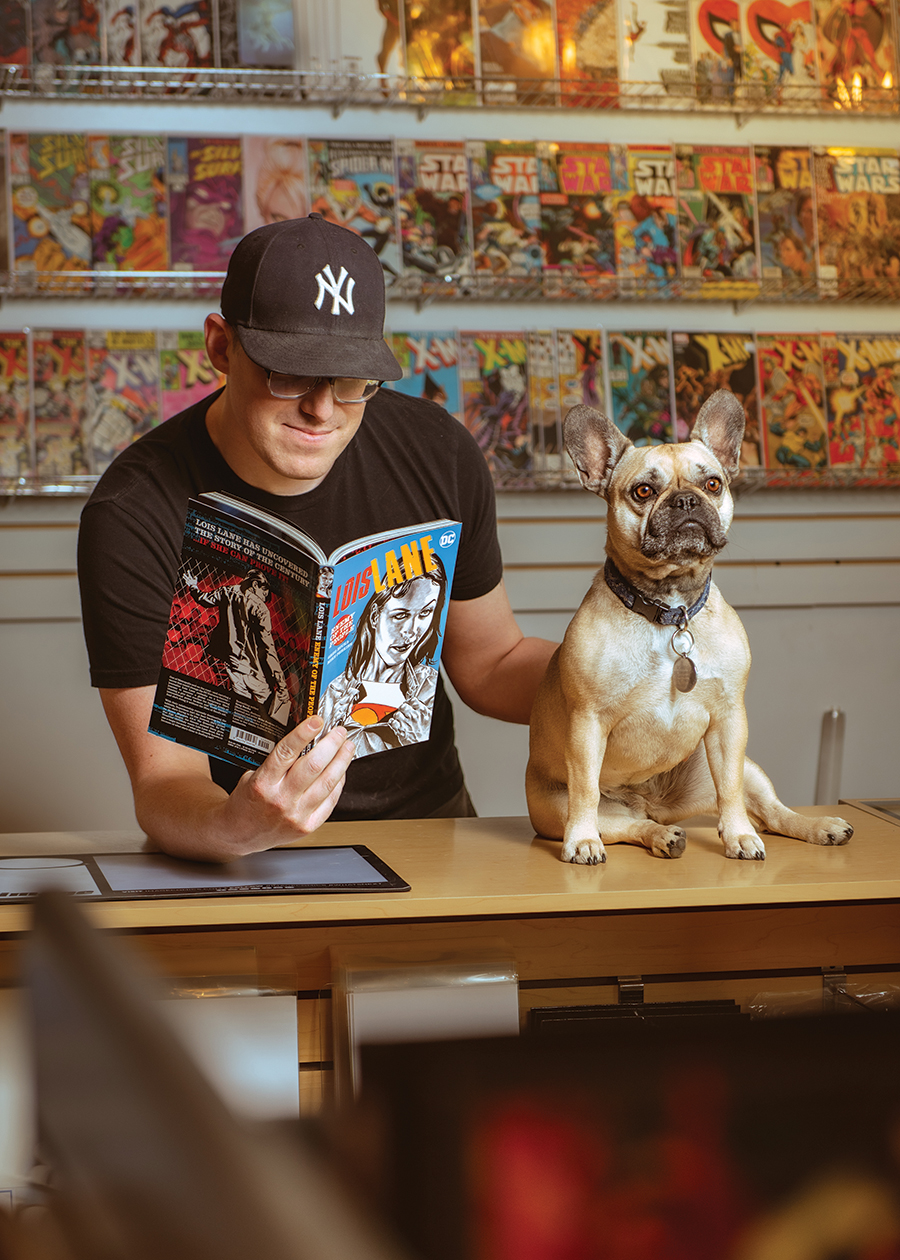 Getting to Know the Person Behind the Dog

Harris’ mission throughout shooting this series was to bring out the owners’ personalities as well as that of their dogs. He went into Ssalefish Comics in Greensboro to take photos of Stephen and his French bulldog, Lois, who is known to wander leisurely around the shop. Harris knew where to find a good story, but he was still surprised to get to know people he already knew on a much more intimate level. “You could have the toughest guy ever, and he’s making baby voices,” says Harris. “People are really vulnerable around their dogs.” 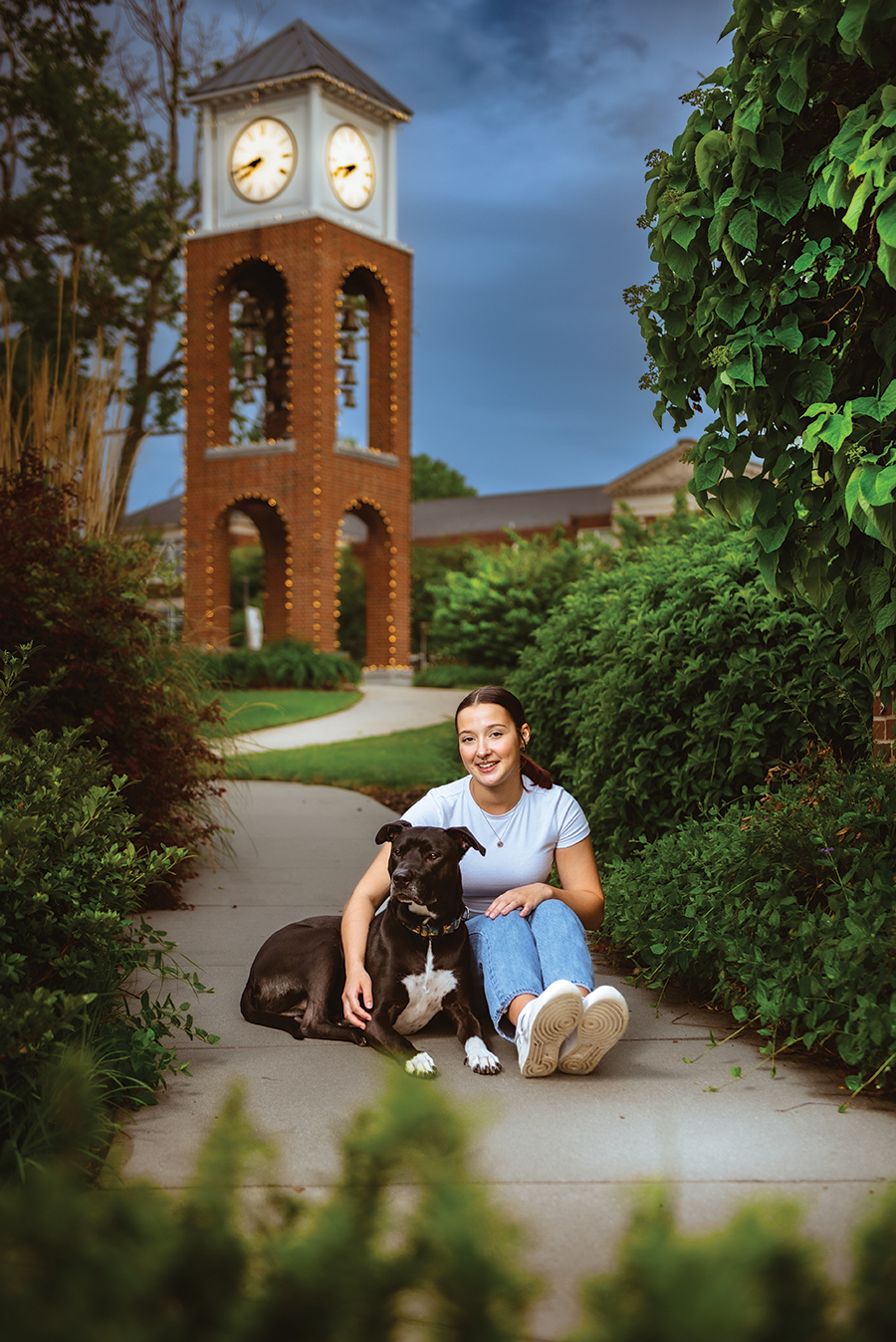 While most of the photos in his series exploring the connection between humans and dogs feature friends who volunteered to be subjects, others asked Harris to try to capture their special bond with their own fur balls. Kendall, a student at UNCG, reached out to Harris to be part of this series with her black-and-white pal, Pluto. 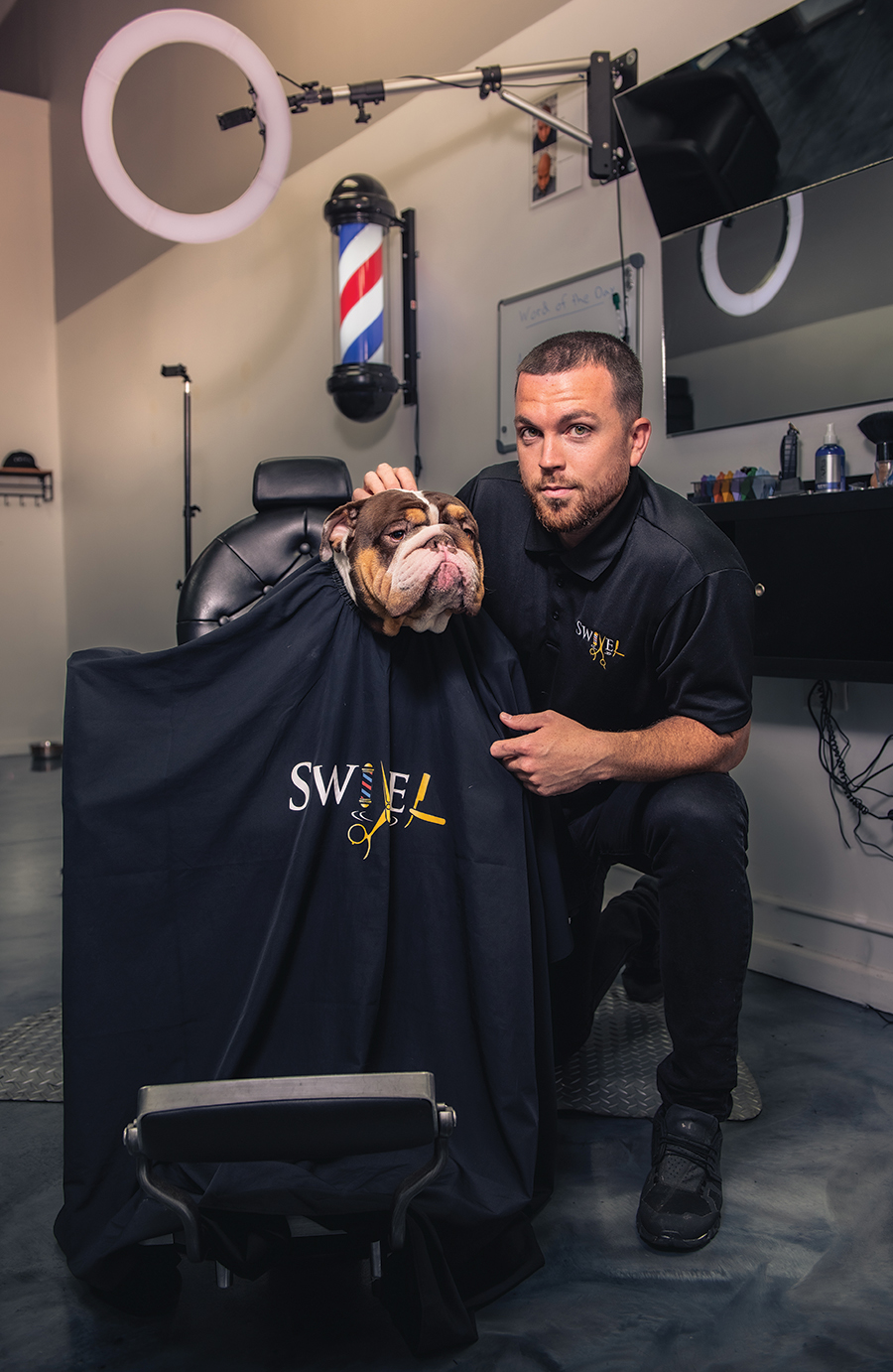 Harris’ latest image captures man-and-best-friend at work together. On a recent trip to Swivel Barbershop for a haircut, he happened to notice his stylist’s dog, Gordo, nearby and asked to snap a photo. Gordo and his human, Chase, were happy to oblige — don’t be fooled by Gordo’s look of indifference. Harris says, “I’m getting better every time I take photos.”