Made in the Shade

As the heat of midsummer descends and blooms fade, these five leafy sanctuaries help their creators keep their cool 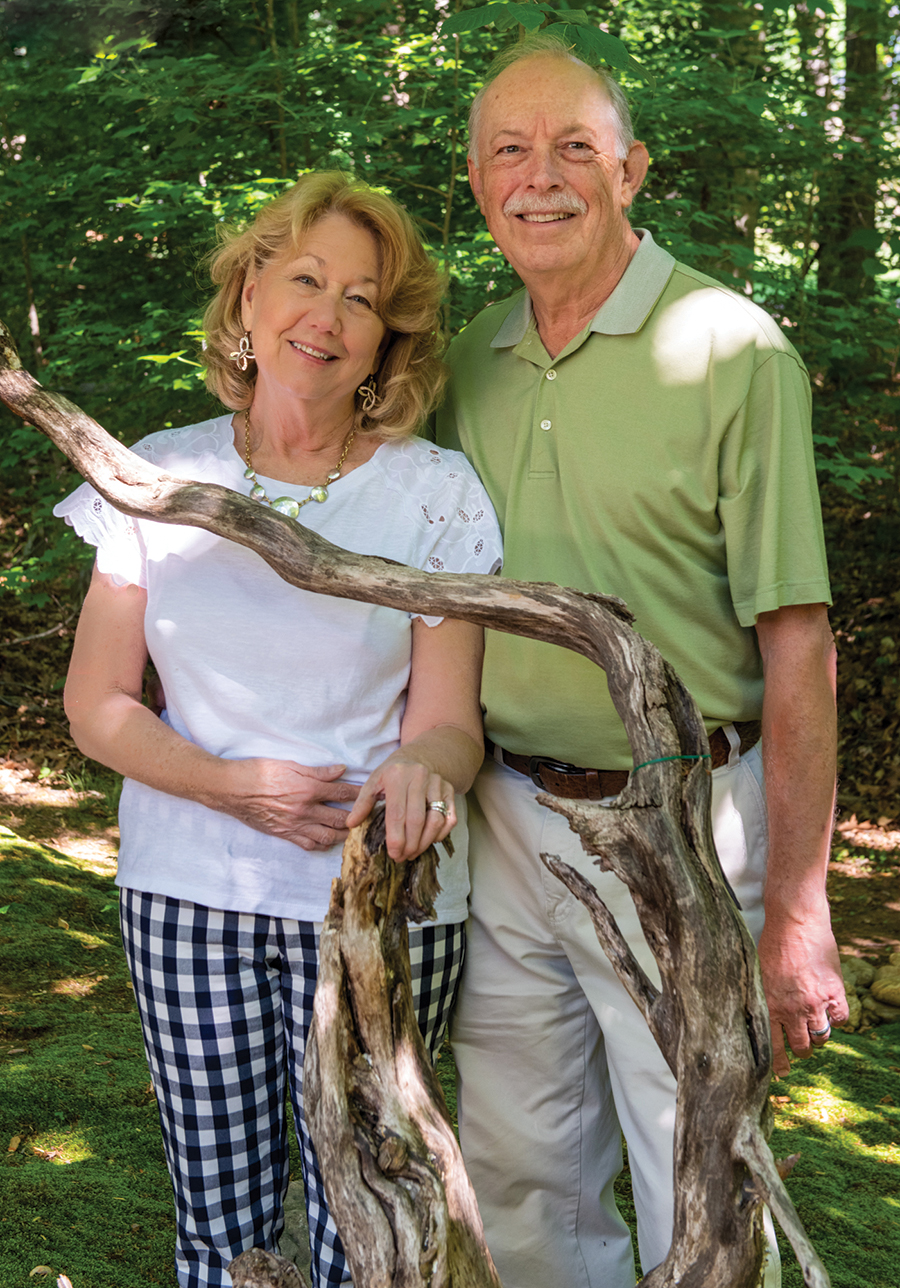 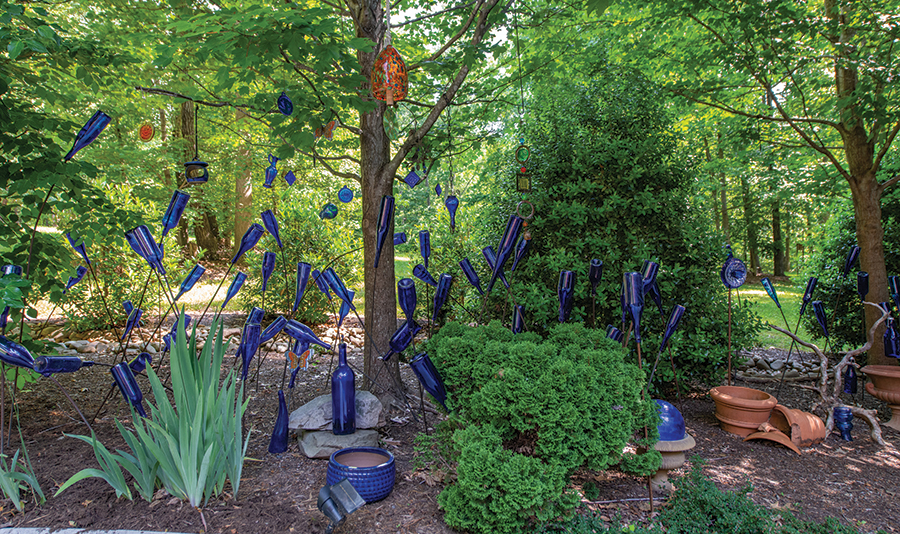 Fifteen years ago, Kathie and Paul Tiedeman found the perfect retirement home in the hardwoods of Oak Ridge. As the lively forest that surrounds their house has grown, so have the Tiedemans’ many shade gardens, including a serene moss garden highlighted by a dramatic sculptural tree root, autumn ferns and mountain laurel; lush borders of rhododendron and irises under overhanging maples; a newly installed terrace under dogwoods with beds of hellebores, trillium and Japanese ferns; even a whimsical blue bottle garden.

“The garden has been a work in progress,” says Kathie. “Every year we seem to lose a little more sunlight, so that’s why we have a yard that’s becoming moss and Paul raises his tomatoes in rolling tubs — tomatoes on wheels,” she adds with a laugh. “The thing I love about a shade garden, on the other hand, is that it quenches your thirst for nature on the hottest days, a perfect retreat that soothes.”

“This garden is like a sanctuary for both people and animals on a summer day,” agrees Paul, a retired electronics salesman who spent years traveling to Kyoto, Japan, explaining the Tiedemans’ botanical bent for Asian elegance. “We can sit here quietly on a summer day and listen to life around us in the forest. That’s very special.” 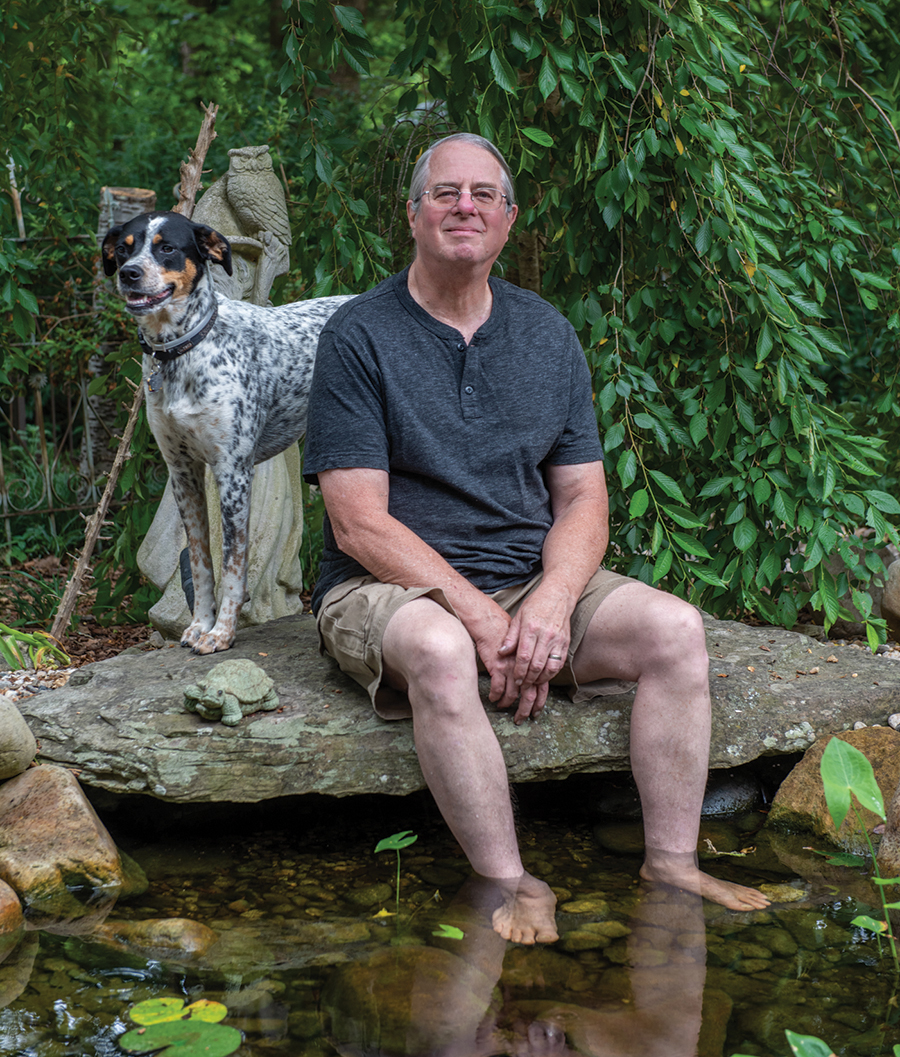 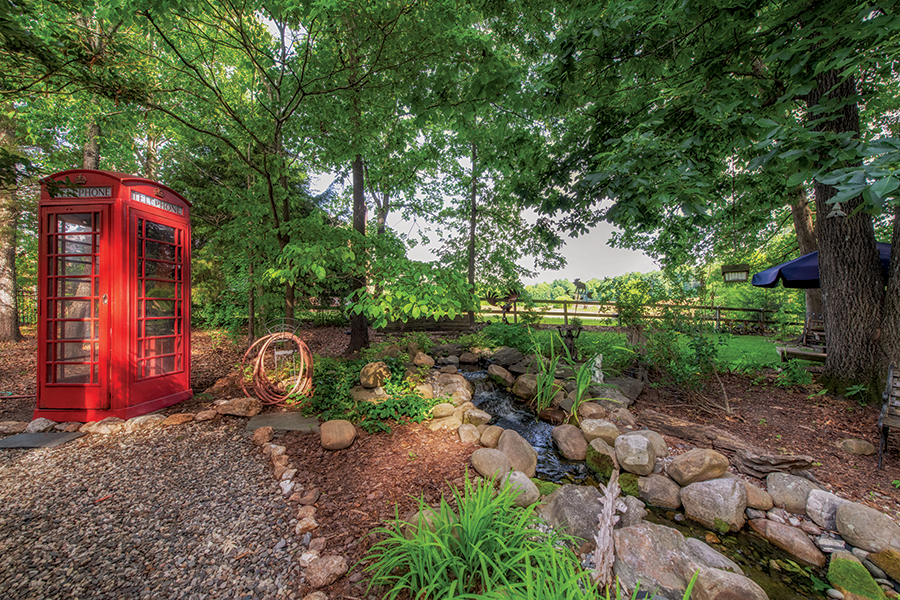 “Maybe the thing I like most about our garden is the wildlife it attracts,” says Dan Donovan. “The peace of mind it brings, especially on a summer evening when things begin to stir, is quite wonderful.”

Dan Donovan and wife, Lynn, O.Henry’s longtime contributing photographer, moved to the rolling countryside of Southeast Guilford County 18 years ago and immediately began planting a garden for all seasons around their new home.

Beneath a grove of hickory, white oak and mulberry trees out back, however, the winding paths of their enchanting garden eventually morphed into a splendid shade garden that makes for the perfect retreat when the temperature soars. Beds of Lenten roses, gardenia bushes, mountain laurel, hydrangea and shade-tolerant forsythia provide the cooling effect of a forest glen. A lone Lincoln rose even finds enough filtered sunlight to lushly bloom in early summer.

A defining element that helps tie it all together is the restful sound of running water from the small goldfish pond at the center of the garden, where whimsy rules in the form an old fashioned hand pump and actual city fire hydrant Dan transformed into a pumping station. A mature weeping cherry presides over the tranquil setting. Other whimsical elements in the garden include a moose-themed fire pit that Dan commissioned a local artist to make and a classic British red phone booth situated off in the verdure of the east garden. “The phone really works,” provides Lynn. “If a tornado hits, that’s where we’ll hide.”

It’s hard to imagine even nature disturbing this peaceable kingdom, where family dogs Fiona and Luna roam freely along the garden’s paths and their predecessors, Ollie and Summer, rest beneath tree peonies that never fail to bloom come early summer.

What a paradise in shade it seems. 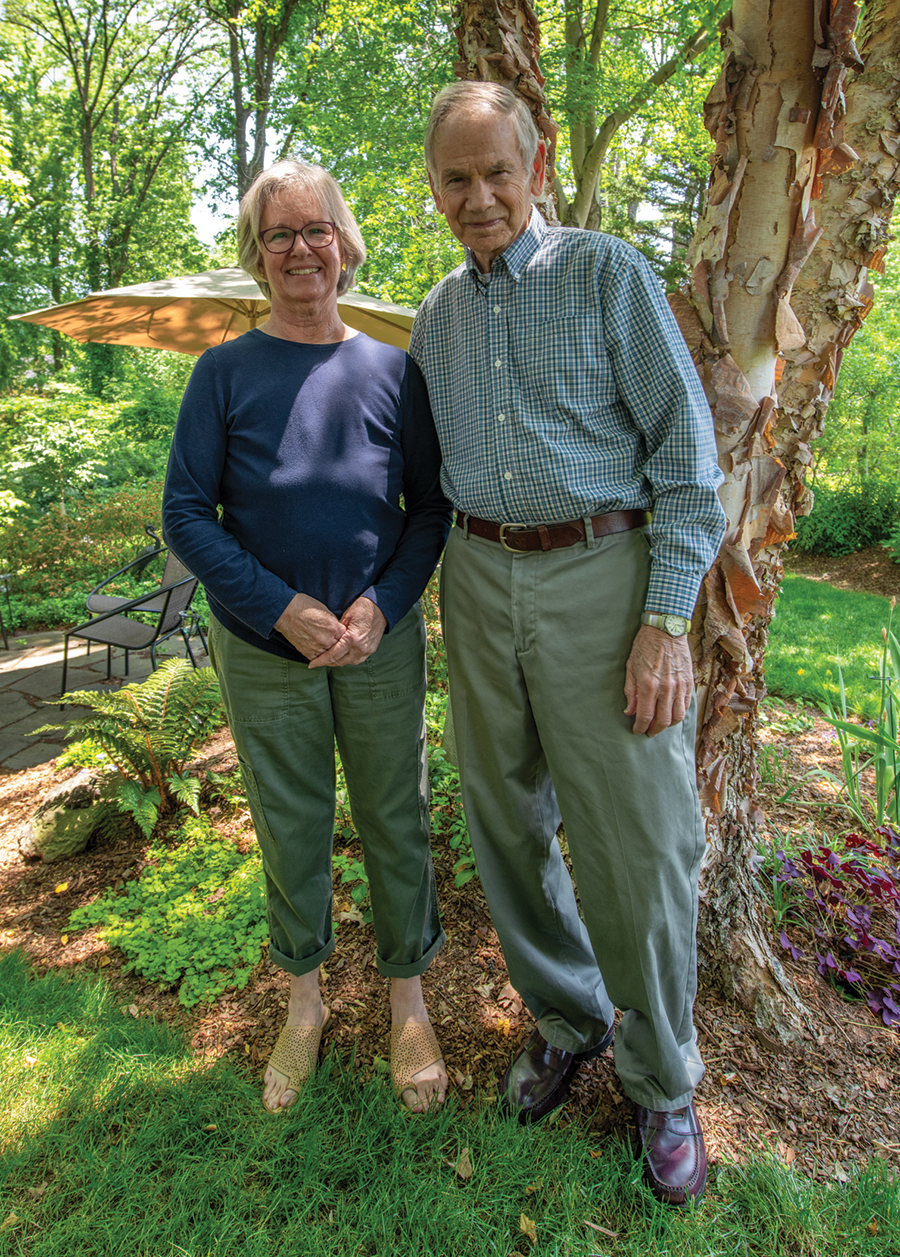 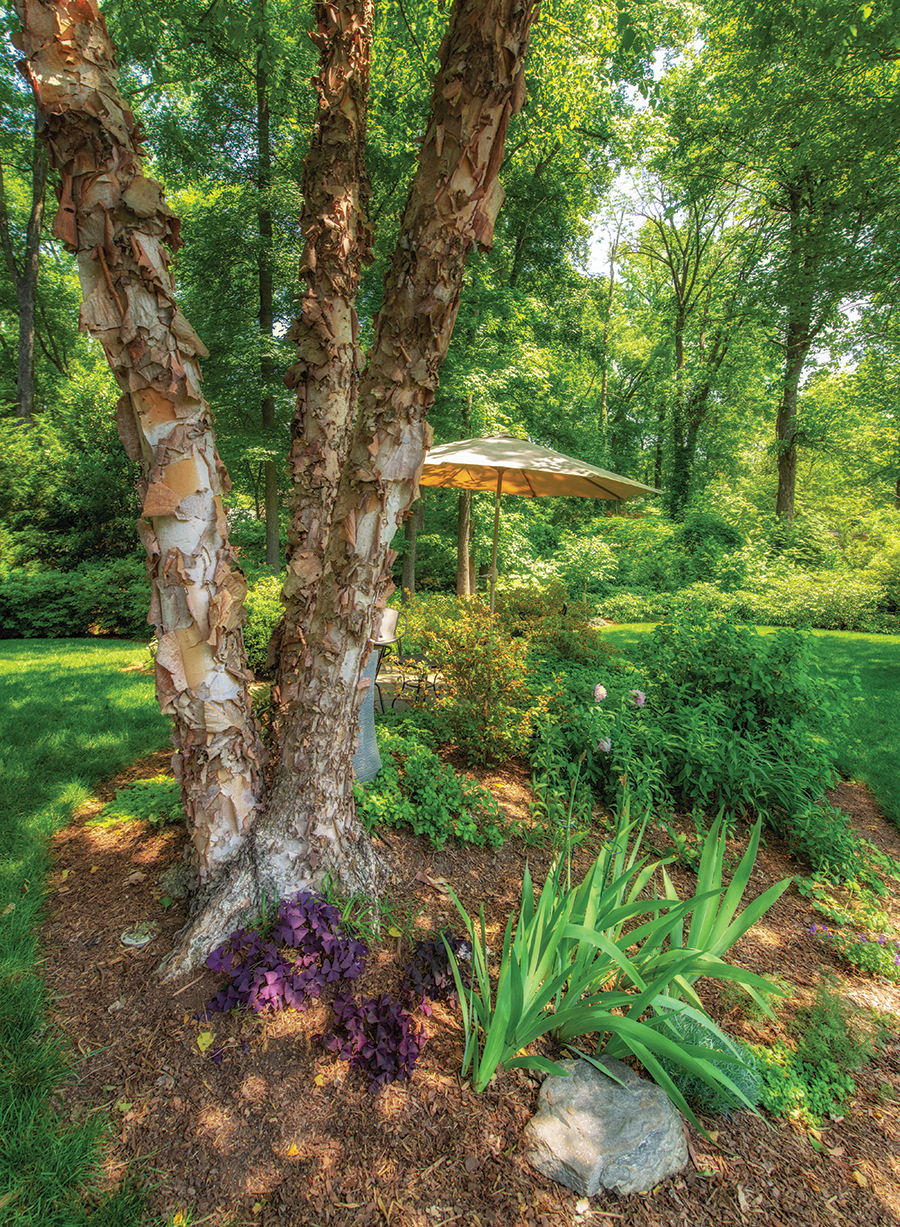 “I think of our garden as American zen,” says Celine Sprague with a quiet smile. “By that, I mean it’s a simple garden made up of broadleaf evergreens layered with other plants for a subtle effect that is both comforting and inviting, a cozy effect year-round.”

Over two decades, Celine and husband, Stan, have cultivated a classic shaded retreat behind their home in Woodland Hills. Leyland cypress trees, robust wax myrtles and several varieties of hydrangea form a verdant backdrop for mature camellia, azalea and laurel plantings. The combination produces a brilliant seasonal show of color highlighted by splashes of native bleeding heart and Beardlip penstemon.

“Essentially, this is a no-prune garden,” says Celine, a longtime gardener who helped shape the Greensboro Arboretum’s perennial garden. “My oldest daughter is an artist who talks about the importance of negative space, a place for your eyes to rest. That’s how we look at this garden, a tranquil place to rest on a summer day. A shade garden also saves a lot of water,” she adds. “That’s increasingly important these days.” 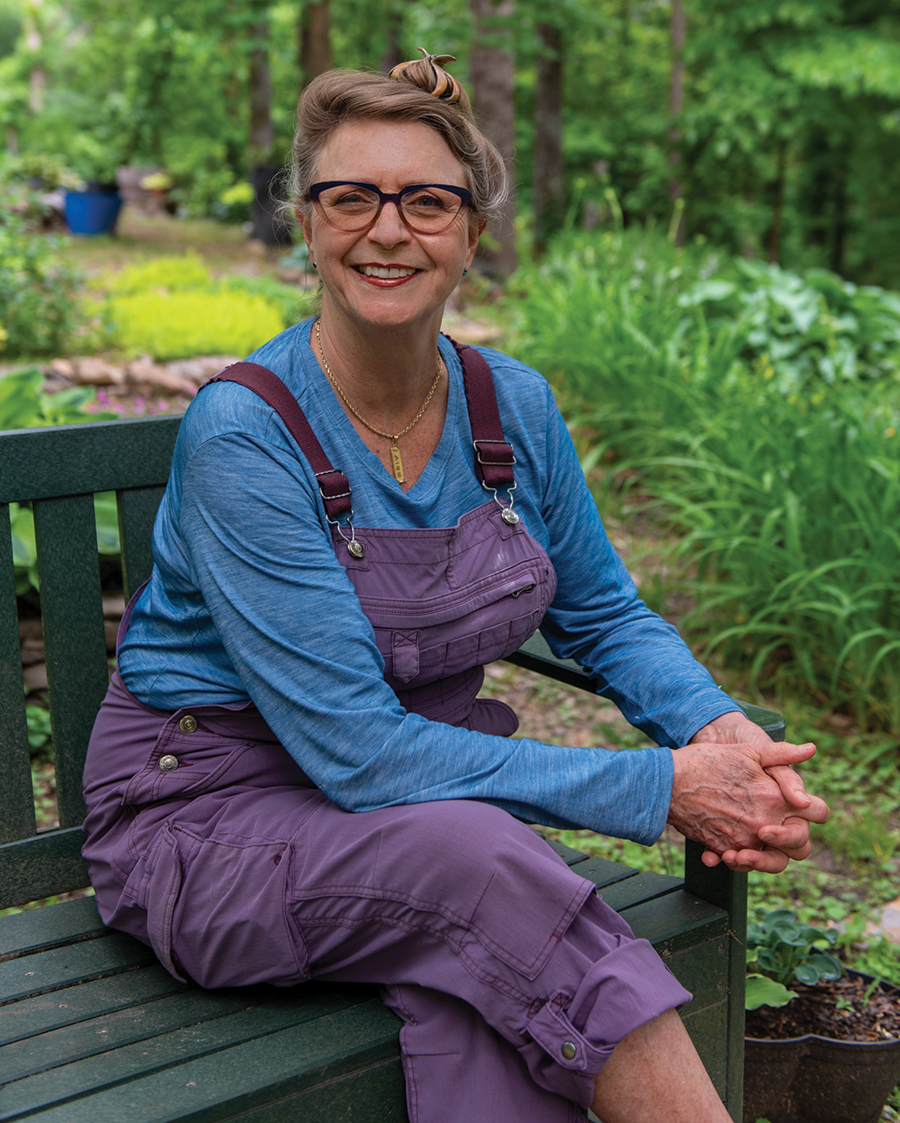 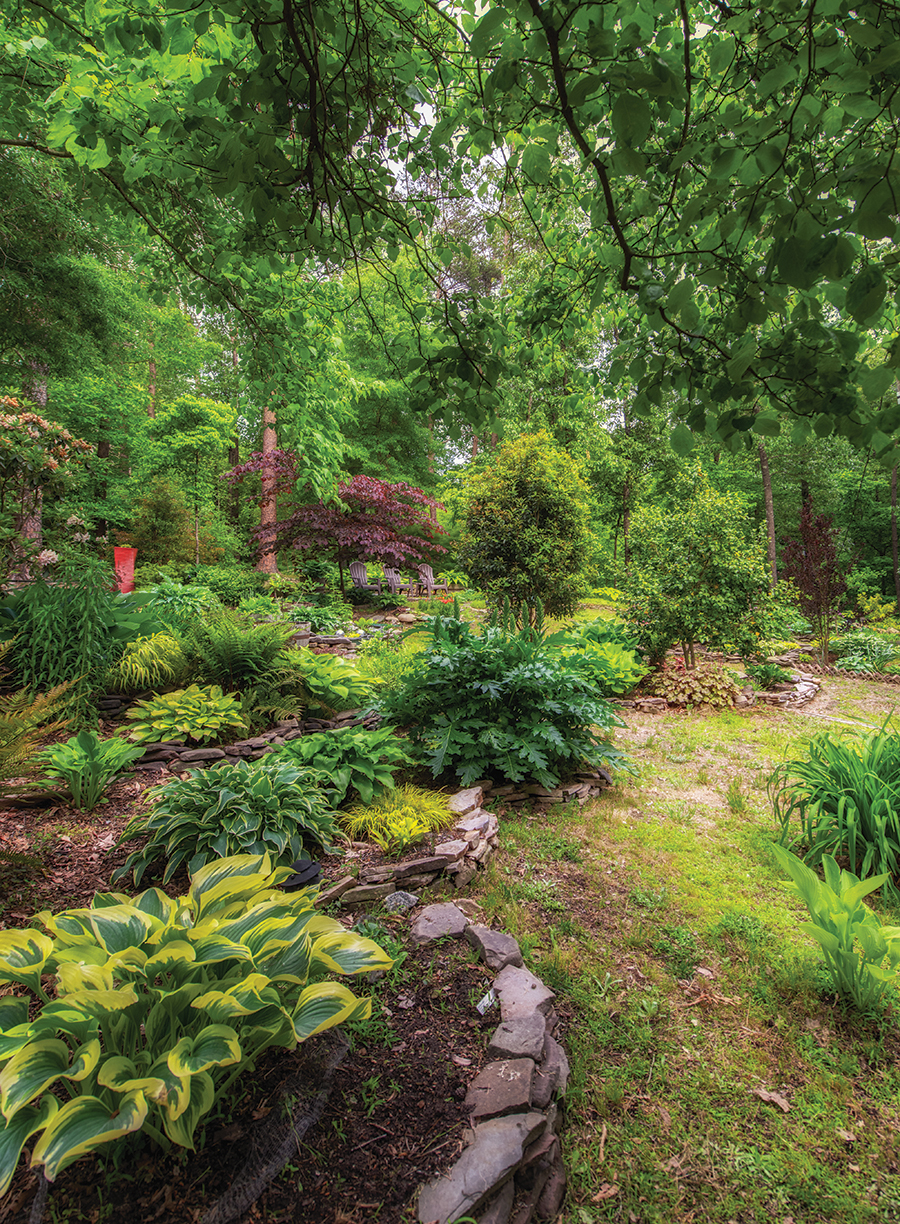 When Kathy Rooney and husband, Doug Canavello, moved into their house on 27 acres in the woods of Summerfield back in 2008, she started her home garden with a few phlox plants. “Not long afterwards, a friend brought me several hosta plants from Lowe’s and, in a word, I quickly got addicted,” explains the longtime Rolfing expert. “When I learned that there are over 8,000 cultivars of hosta plants, they became my passion.”

Her ongoing battle against native voles (that munch hostas from the underside) combined with loss of several large shade trees that fell when Hurricane Michael blew through the region in 2018 doesn’t dim her ardor for ever-expanding her domain of beautiful shade-loving plants in the least. “Hostas are hardy and endlessly interesting. I’m always out in my garden looking for new places to plant more hostas,” she adds with a hearty laugh. “Besides, it keeps me out of trouble!” 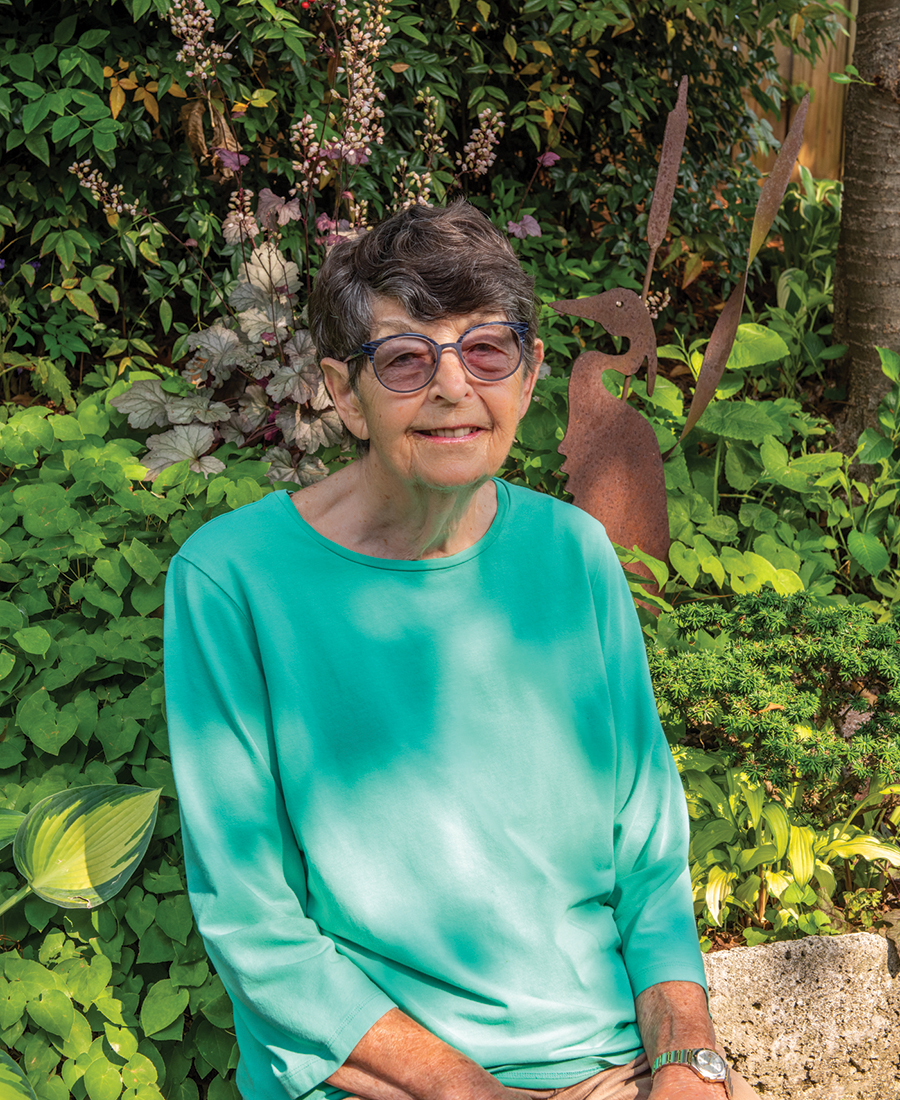 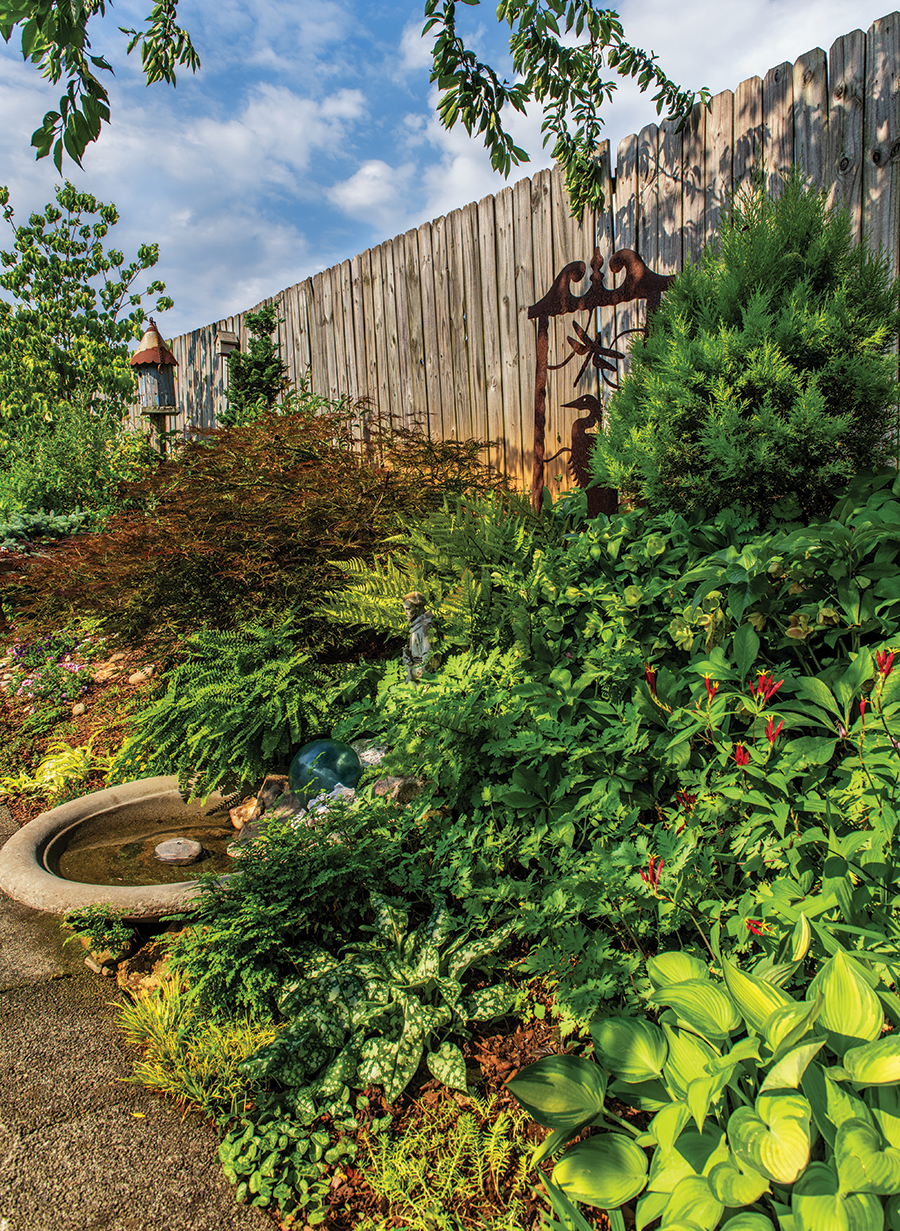 Seven years ago, when Jeanette and Gordon Wyndham gave up their beloved 4-acre garden in Summerfield in favor of an independent living cottage at Whitestone Retirement Community on Holden Road, they didn’t give up their love of keeping a garden. Now, a spectacular private garden spans more than 100 feet above a retaining wall just out their back door.

The celebrated curator of the Arboretum’s perennial border — who earned the nickname “Whack’em Wyndham” from her volunteers due to her belief that perennial plants thrive by being cut down after blooming — has spent the past decade creating a living border. A mix of sun and shade elements range from the Japanese laceleaf maple she raised from a cutting to diverse planting of viburnums, mahonia, dogwoods, ostrich ferns and several unique native plants given to her by longtime friend Graham Ray.

“Shade gardens are very special,” says Dame Wyndham, who recently lost a couple large shade trees but — true to form — artfully rose to the challenge by planting more sun-loving plants. “That works out well,” she quips, “for Gordon’s tomatoes around the corner.”  OH

Jim Dodson is the founding editor of O.Henry.